In Philadelphia, an Abandoned Bottling Plant Is a Makeshift Synagogue

“Building for sale, pray within” Photography courtesy the author An abandoned 70,000-square-foot bottling plant in Philadelphia’s Northern Liberties neighborhood was just the right source for Rabbi Gedaliah Lowenstein, seventh generation Californian, to tap for his new synagogue. Of course, the price was also just right—rent free. An agreement with generous and supportive building owners, though, […]

“Building for sale, pray within”

An abandoned 70,000-square-foot bottling plant in Philadelphia’s Northern Liberties neighborhood was just the right source for Rabbi Gedaliah Lowenstein, seventh generation Californian, to tap for his new synagogue. Of course, the price was also just right—rent free. An agreement with generous and supportive building owners, though, designated that the building could be sold out from under them at any time. That was five years ago. The “For Sale” sign is still out there catching the breeze on North American Street.

“What does a modern synagogue look like?” asks Rabbi Lowenstein, rhetorically, sitting in the 5,000 square foot Jewish Center of Northern Liberties neighborhood, Philadelphia, Pennsylvania, carved out of the huge former bottling plant. “Is there a pool table, a bar? Judaism is not a dusty old religion. It’s about community not a synagogue. There will be a building at some point.”

He always keeps an eye out for a potential new home. In London, he visited a synagogue that transformed like a stage set from religious services to recreational facility and back again—something like that would suit him just fine. In Lowenstein’s view, it doesn’t have to be an edifice designed by a Frank Lloyd Wright to be a real synagogue. 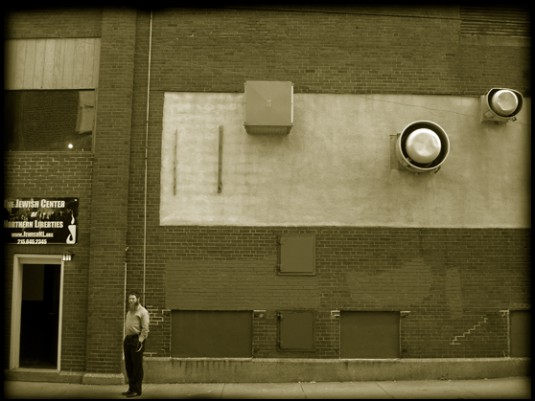 Rabbi Gedaliah Lowenstein outside the plain entrance to his modern synagogue

“Young people don’t like to make commitments, “ says the thoroughly affable, warm, and engaging Rabbi Lowenstein. At 34 years old, he figures he’s probably one of the senior citizens of his synagogue. He sees a whole spectrum of involvement amongst his own congregants. It’s not a problem for him. He totally gets it, doesn’t fight it, adding, “People don’t schedule things. It’s the society we live in. People are much more independently minded, not a part of group-think. There is no allegiance.”

That begs the question…no allegiance…not even to a higher power? 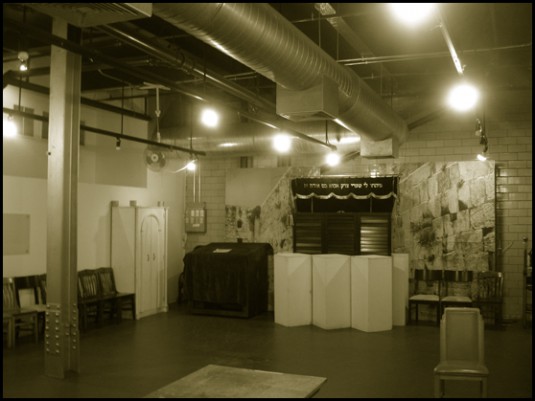 Synagogue services, soccer matches, classes and meetings are all held in this same space. Other rooms in the 5,000 square foot synagogue function as studies, a bar, party space, etc.

“I refuse to join any club that would have me as a member.”

We discussed Bowling Alone: The Collapse and Revival of American Community, the book that charted the decline of the American penchant for joining clubs. Rabbi Lowenstein agreed. It seems people still do want to join a club…as long as you don’t call it a club! He pointed out that people “join” a sports team, buy expensive season tickets and don’t think twice about it.

Lowenstein, a sports fan himself, says he has adopted a “standard, run-of-the-mill entrepreneurial spirit” from the sports world to build his synagogue. He knows he’s providing entertainment value and also a very humble sense of appreciation for what his own congregants offer in terms of wisdom, knowledge and experience.

OK, so, how many dues paying members does the Jewish Center of Northern Liberties have? Zero. And yet their bowling league is going strong, people show up for weekly services and as many as 2,000 show up for their annual Lag BaOmer service, donating money on their own terms throughout the year. Lowenstein must be onto something. Indeed, he contends that the old model of a solid core of dues paying synagogue members is eroding.

When it comes to building a religious community, Rabbi Lowenstein knows having 700 Facebook friends doesn’t cut it. “We need that human contact. The need is still there [for] healthy social outlets, physical connections with people,” he says, adding, “A community is much more than a synagogue and a synagogue is much more than services.”

Along with his wife, who develops the synagogue’s religious and recreational programming, he’s providing new and creative ways for congregants to interact so their sense of Jewish identity and affiliation matches their modern, plug and play sensibility. “They have an issue with being old fashioned about it,” the Rabbi understands, “What’s old is authentic but we live that tradition in a modern prism.” 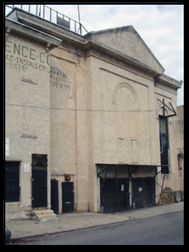 Around the corner from Rabbi Gedaliah Lowenstein’s Jewish Center you can see Ben’s Ironworks. The outline of an old synagogue (now crudely lathered with dirty, pale yellow stucco) can be discerned, a remnant of a Jewish community set amidst heavy industry that once flourished with some 30 synagogues.

Like a vanished Mayan civilization, “white flight” prompted a mass exodus of Jewish families. A slow reversal may be taking place. Many decades later, Northern Liberties is hip, blossoming with shops, restaurants, parks and some new homes that already cost a fortune.