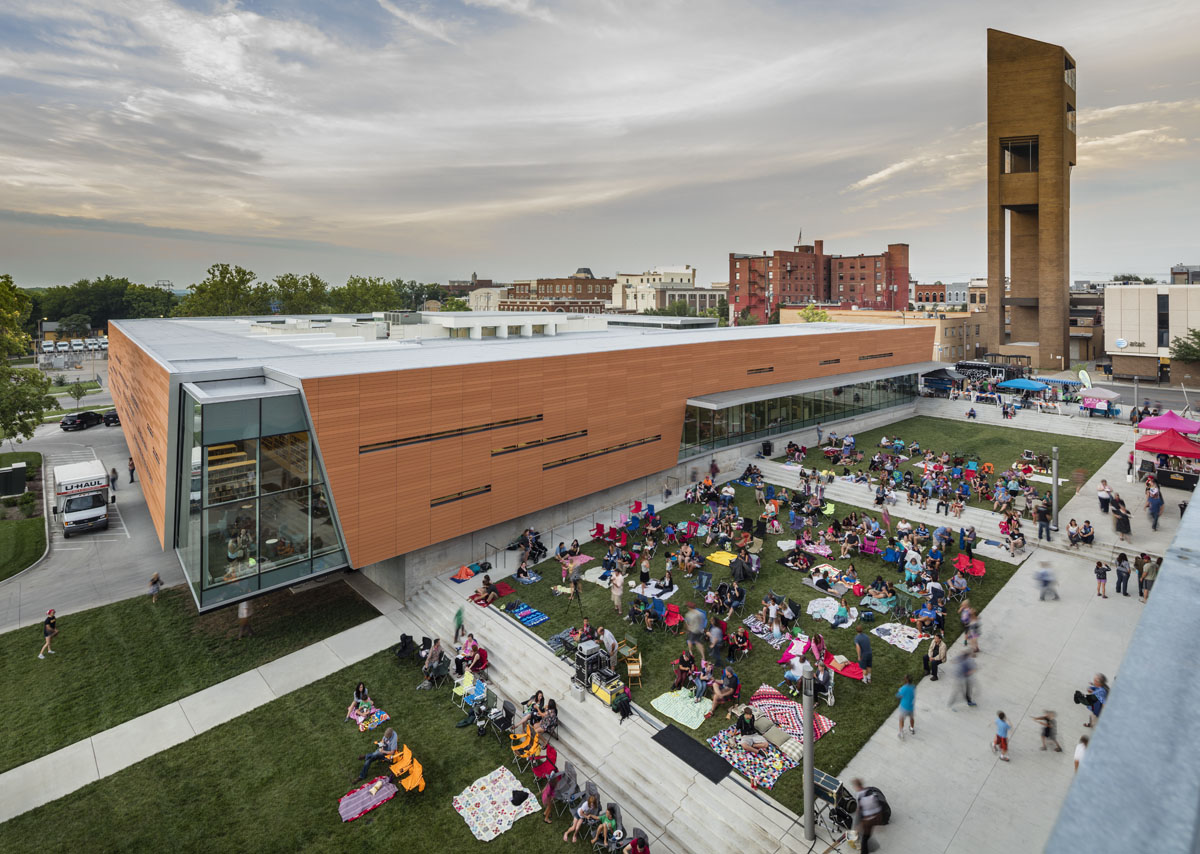 The new plaza at Lawrence Public Library gives the city an inviting space for community events in the heart of downtown.

Technology has compelled many libraries to refashion their spaces and redefine their roles. Dusty volumes now seem like fossils buried under smartphones and tablets—especially to a generation of digital natives. “We needed to think about a library that could fulfill its traditional role while offering spaces for new activities and technologies,” says Sean Zaudke, an architect at the Gould Evans office in Lawrence, Kansas, who served as project manager for that city’s library renovation project. “It was a unique challenge.”

Built by a local firm in 1972, the Lawrence library was an earnest but somber monolithic block with outdated way-finding, inefficient climate control, and a poorly lit, compartmentalized interior. In 2010, shortly after town voters approved an $18 million plan to renovate the library and the zone around it, Zaudke began visiting the site. “I noticed there were only a few spaces in the whole building where people gathered throughout the day,” says Zaudke. “They were the few spaces that had natural lighting. I took that as a meaningful cue.”

Opened to the public in 2014, the new Lawrence Public Library is a sunlit amalgam of reading spaces, maker spaces, tech areas, and community rooms. Instead of razing the existing library, Gould Evans gutted it, carving an airy atrium into the central space once occupied by library stacks. The firm then wrapped the exterior shell with a reading room with floor-to-ceiling windows and ample daylight. A kiln-fired terra-cotta skin reprises the red-brick aesthetic of the nearby downtown district. New solar-sensitive light fixtures and an audit of the existing mechanical systems led to substantial energy savings—even after Gould Evans increased the interior space by almost 50 percent.

The new library is a hit with the Kansas college town. Overall usage has increased by more than half, and, more remarkably, adolescent use has nearly tripled. Teenagers flock to use the flat-screens and gaming consoles of the library’s high-tech teen zone, and to cut demos in a community recording studio, while families with small children enjoy a zone with large cubby reading spaces. “This project was an opportunity for us to create a place where people could take computer classes, acquire business skills, and have access to the Internet,” Zaudke says, “and all the while remembering that a library is often the only civic space where you can go to quietly think and read.” 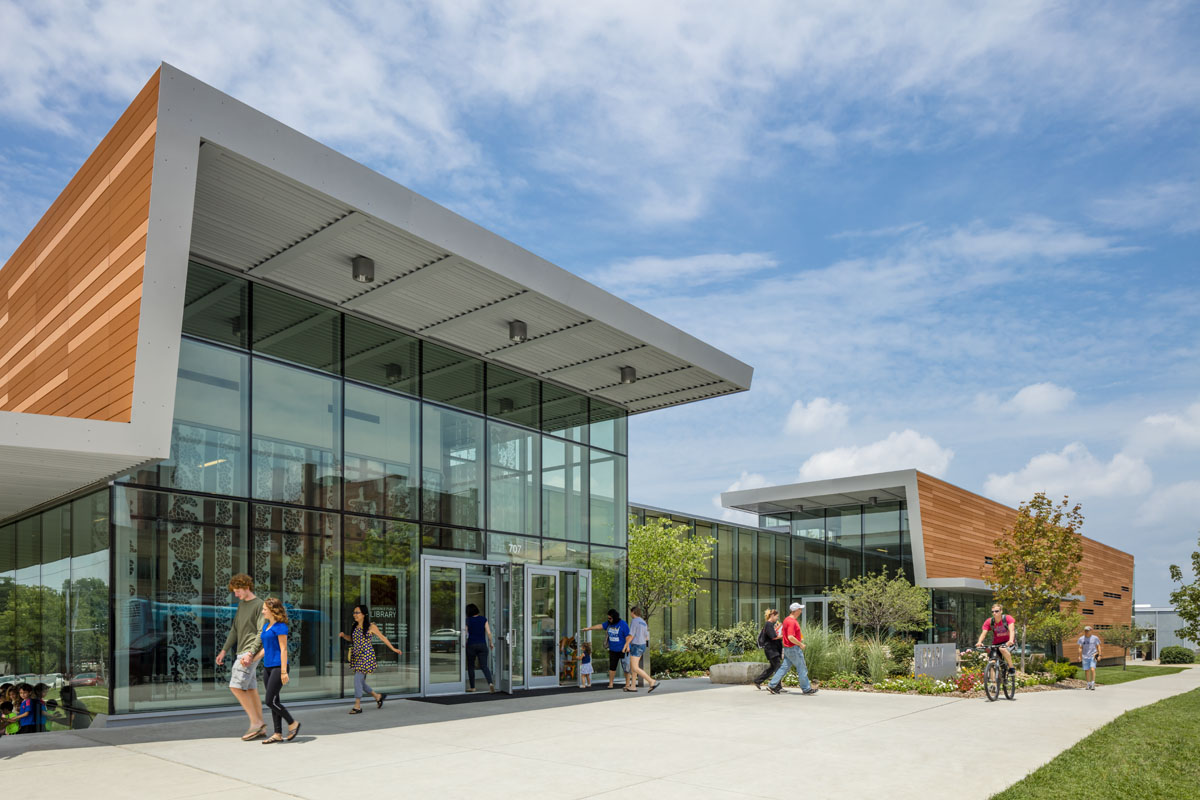 The $18-million renovation revived the 1972 library building, which was plagued by outdated way-finding, inefficient climate control, and poor lighting. 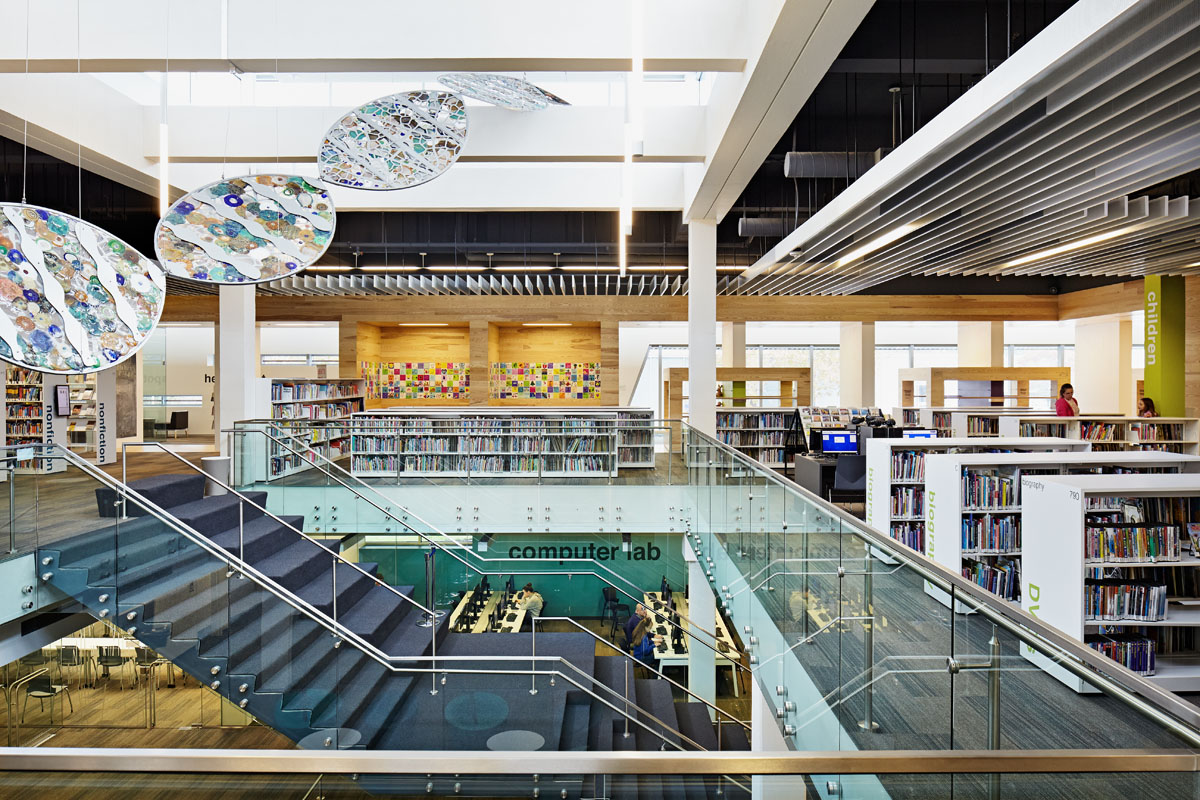 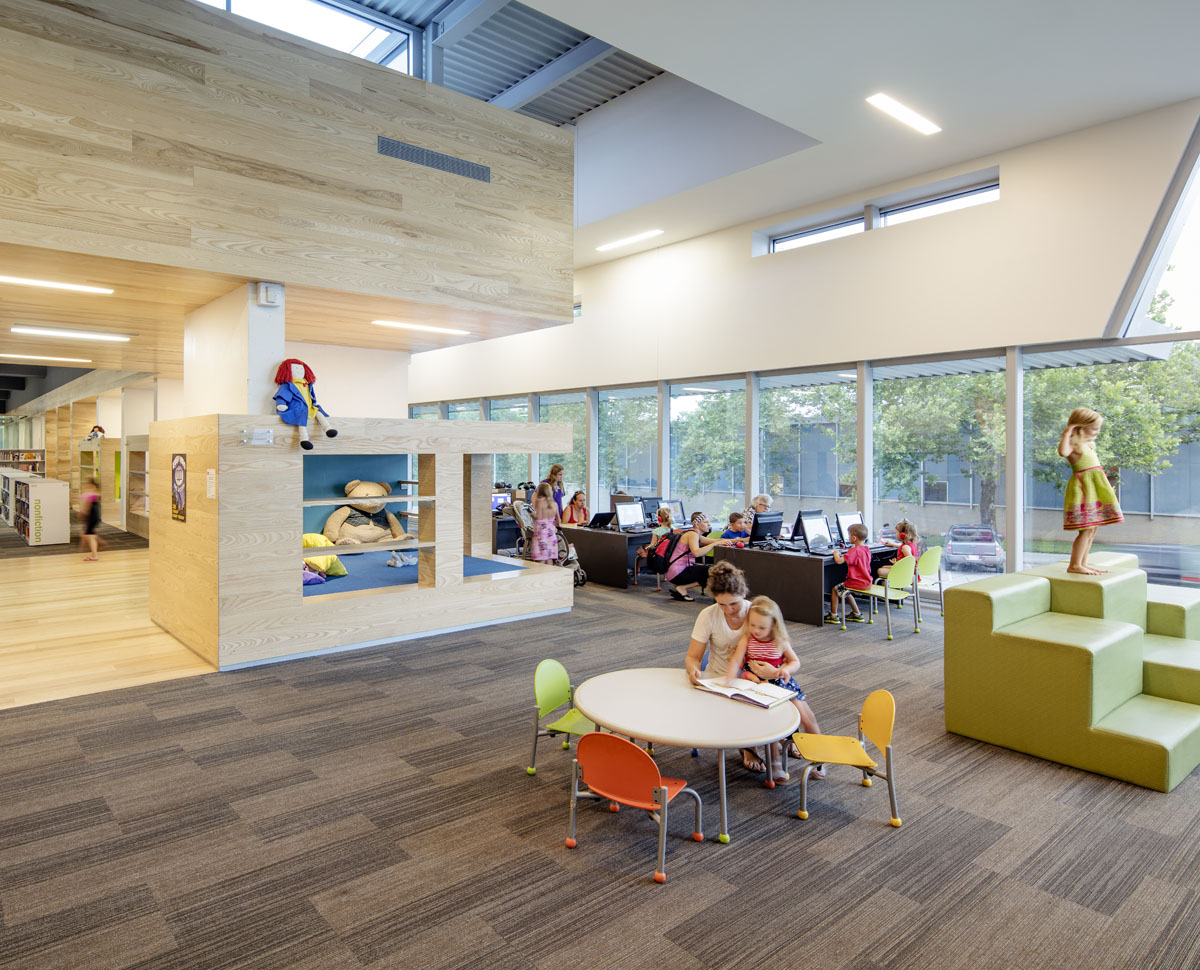 The renovation has drawn young users in large numbers—reading niches in the children’s areas offer cozy nooks for even the youngest among them (above and below). 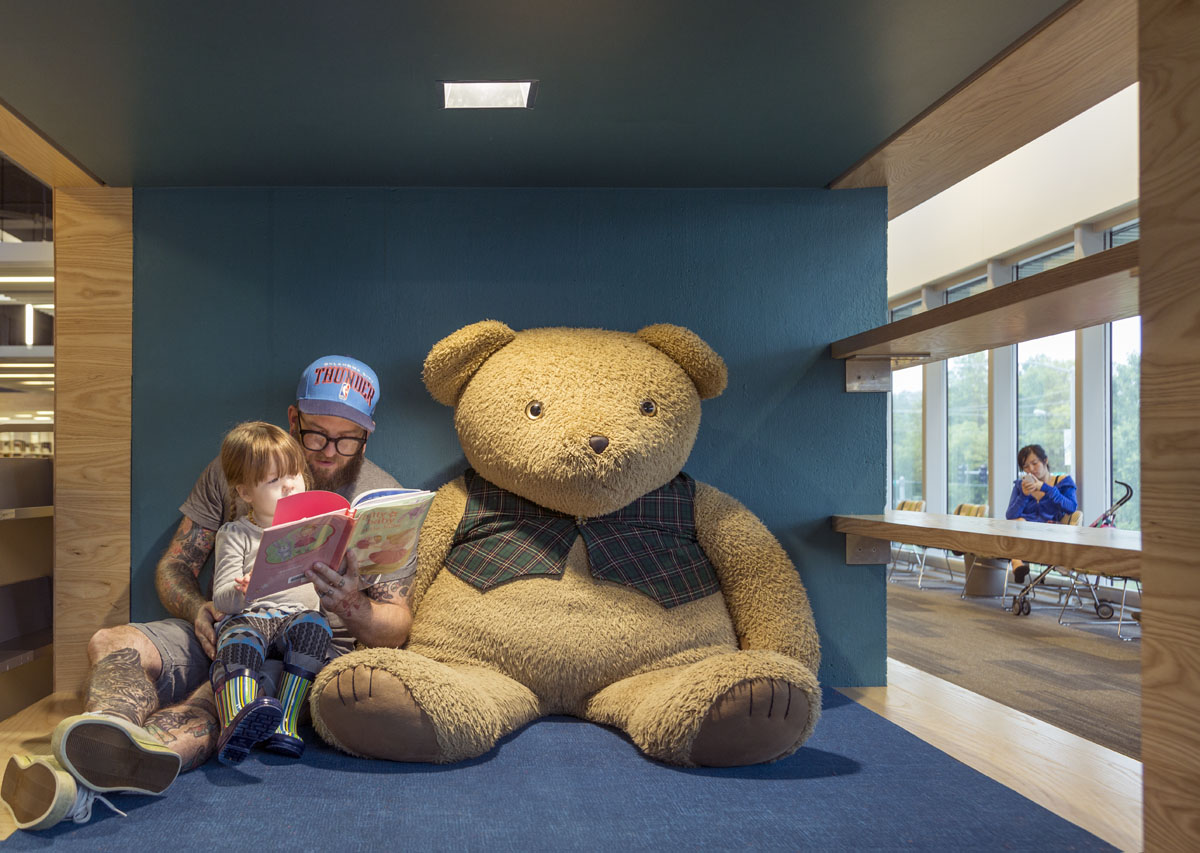 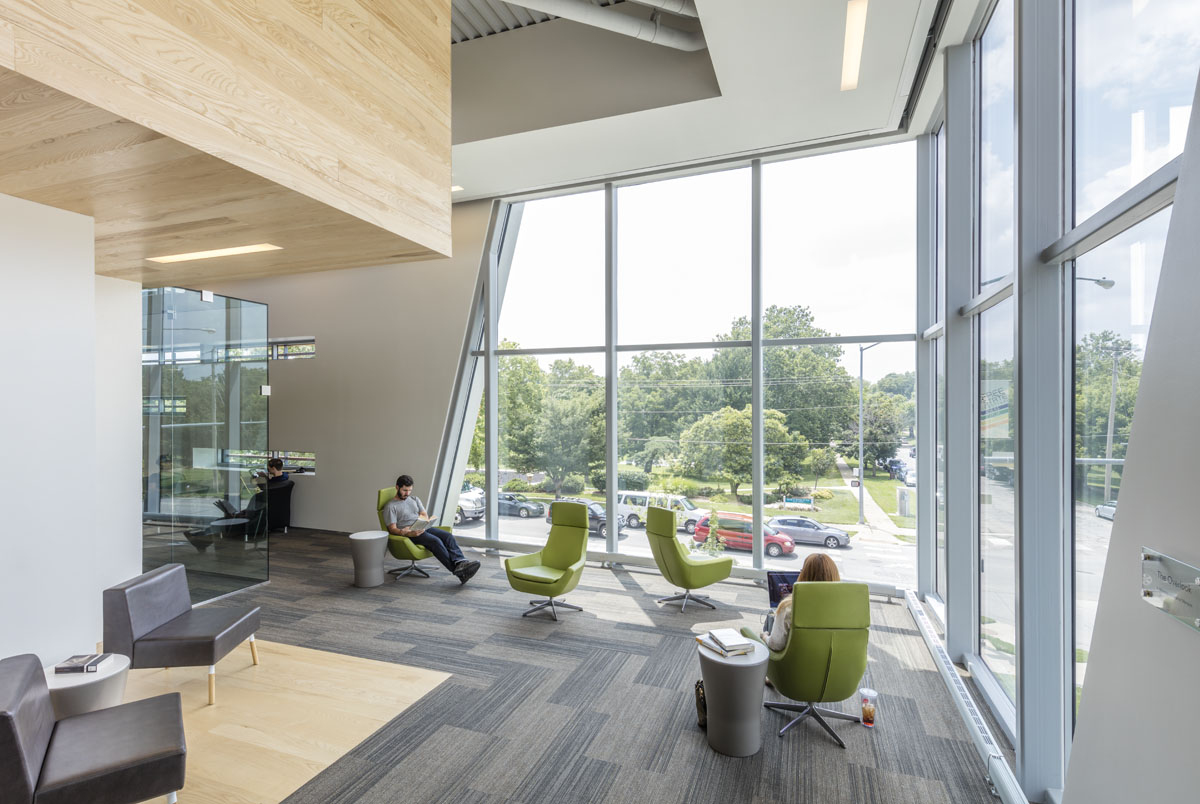 The community has taken to the new library, with usage increasing by more than half.