In Touch with a Smarter Future

As of last month, travelers catching an American Airlines flight out of New York’s JFK airport have a new option for killing time before their boarding call: an 8-by-12-foot digital display, conveniently located between security and the departure gates, that lights up and announces “Welcome to the Smarter City!” every time someone walks within six […]

As of last month, travelers catching an American Airlines flight out of New York’s JFK airport have a new option for killing time before their boarding call: an 8-by-12-foot digital display, conveniently located between security and the departure gates, that lights up and announces “Welcome to the Smarter City!” every time someone walks within six feet of its huge, colorful screen.

Passersby who are suitably enticed to check out the gizmo will find an interactive touch-screen display showcasing IBM’s recent foray into large-scale, digital-technology-driven solutions for smarter, more livable cities. Specifically, users will be able to explore six neighborhoods of a hypothetical city, and learn about the various smart systems that IBM has imagined for them—things like coordinating police and fire department responses to emergencies by shared data systems, or centralizing health-care information to allow citizens easy access to their medical records. Bright and cheery touch icons lead the way to fancy animations, impressive graphs, and videos of mayors telling you how IBM solutions have transformed their cities. 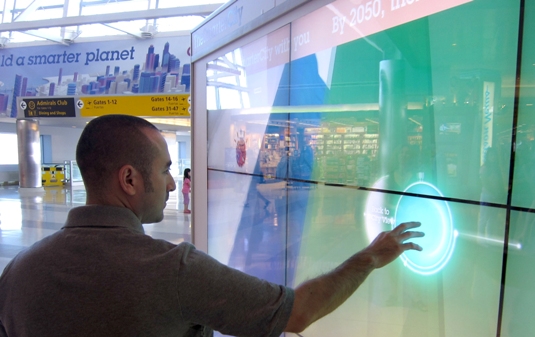 Nifty stuff—but since when has IBM cared about smart cities? The JFK kiosk is just the latest manifestation of a project that has been going on since last year—and part of a broader shift for the company, which over the last decade has moved away from business-to-business tech solutions toward smart mega-systems geared for cities or even the entire planet. We’re talking massive overhaul here, changing the way city departments have functioned for years, so it will take some selling. Besides, a few of these smart solutions have raised eyebrows. Intervening in the public-safety sector proved especially thorny—for some, connecting street cameras up to a centralized system had a distinct whiff of Big Brother about it. IBM probably realized that it had a little more convincing to do, and so the new display is a preliminary effort to reach out to the person on the street—or rather the affluent, influential traveler in the airport terminal.

So far, the display, designed by the ad agency Ogilvy & Mather, has been well-received by travelers. Two weeks after it was inaugurated, at least 6,000 people have paused to interact with the screen, most of them taking the time to explore a couple of neighborhoods fully and to watch the accompanying videos. But exactly how this will translate into popular support for IBM’s mammoth undertaking is unclear.

And, as well designed as the display is, there are a few missed opportunities. A ticker exhorts you to send a text message to IBM, but all that does is send you a reply with the URL of the project’s Web site, instead of drawing you into a longer relationship with the project. Testimonials from city officials and experts abound, but the voices of everyday people are completely absent. The highly abstracted visuals further add to a sense of disconnection from the real world.

But, to its credit, IBM seems to have understood that influencing policy makers isn’t enough, and that consensus for even the biggest ideas must be built from the ground-up. In that sense, the new display at JFK is a small step in the right direction. At best, it might change your mind about how your city should operate. At worst, it will make killing time at the airport a little more bearable.