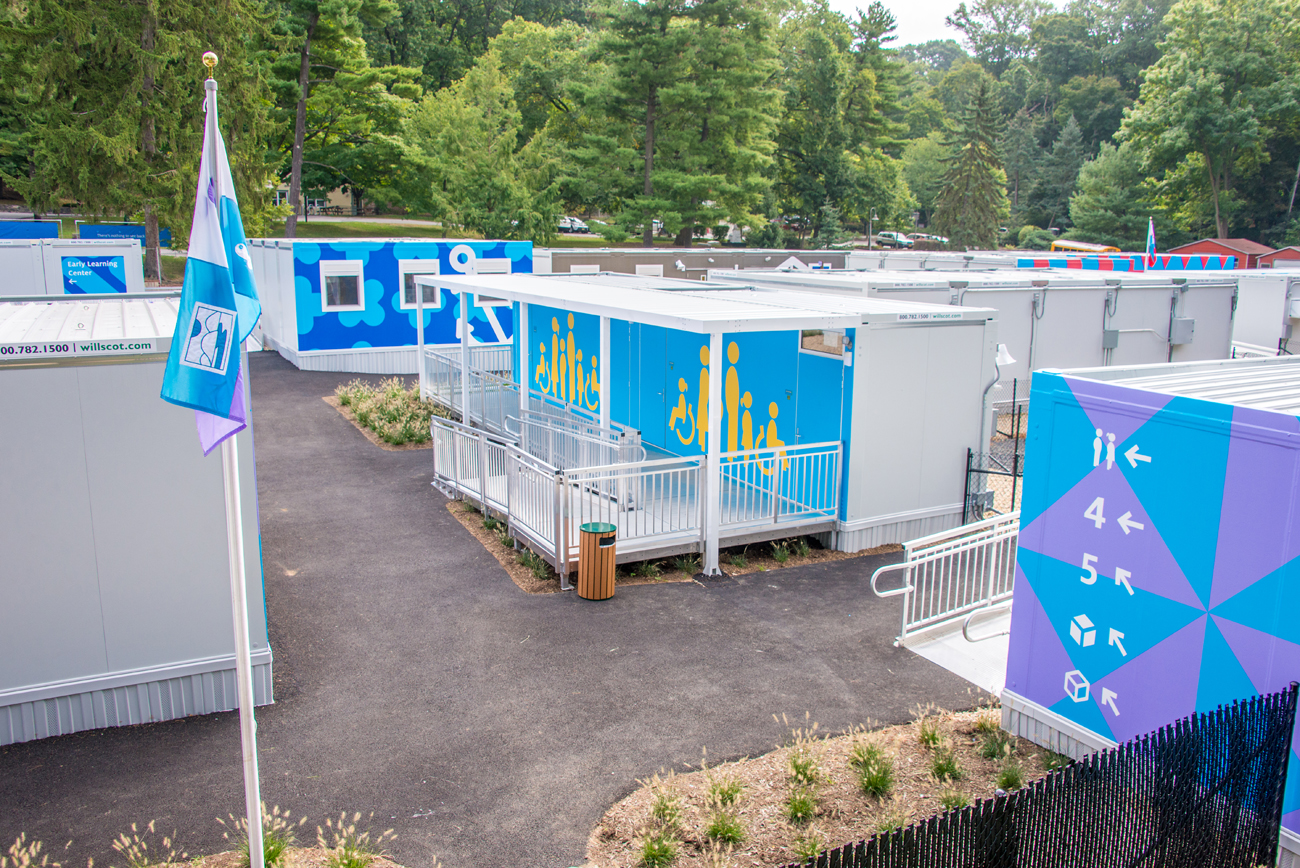 Temporary architecture often takes the form of ill-planned, flimsy structures equipped with only the barest amenities. But for Riverdale Country School in the Bronx, New York, “makeshift” meant a chance to experiment and play.

While its new state-of-the-art Upper Learning Building, designed by New York–based Architecture Research Office (ARO), was being built down the road, Riverdale challenged the architects to conjure up an inspired temporary space for the school year. Taking design cues from Wes Anderson’s 2012 coming-of-age film Moonrise Kingdom, they transformed 13 rented box trailers into the Learning Complex, a colorful temporary campus installed at the edge of the school’s playing field for some 180 third-, fourth-, and fifth-grade students.

“I felt that this could be an amazing opportunity for experimentation about space,” explains Riverdale’s head of school, Dominic A.A. Randolph, a Harvard-trained educator and a leading voice in the education innovation movement, which responds to students’ needs in the digital era and argues for a learner-centric approach to spaces. “The way we handle architecture [in schools] is often not very well thought out.” Randolph has been infusing the school’s curriculum with design-thinking smarts from his decade-long collaboration with IDEO. “The notion of prototyping in schools is rare—and it strikes me as weird,” he says.

For an entire school year, Riverdale’s students and teachers, as well as the project’s designers, immersed themselves in the “learning experiment,” reveling in the creative possibilities of their temporary encampment. The project’s design team, led by ARO, Open, and the Rockwell Group, used the Learning Complex as a veritable full-scale prototype to test ideas even as Riverdale’s permanent building was taking shape.

The first thing ARO tackled was the school’s layout. For the first time, Riverdale’s students and teachers were grouped in three-classroom clusters to bring them closer to their peers at the same grade level. While this strategy is now common in many schools, grouping by grade level had not been possible at Riverdale given the odd layout of its old school building. “We mimicked the organizational concept of the new building in the Learning Complex,” explains architect Kim Yao, ARO principal and co–project lead. Following the propinquity principle, the designers hoped that the improved space configuration might kindle collaboration, friendships, and a stronger sense of belonging among students and teachers at the same grade level. “They’re simple but fundamental goals for the school,” Yao says. 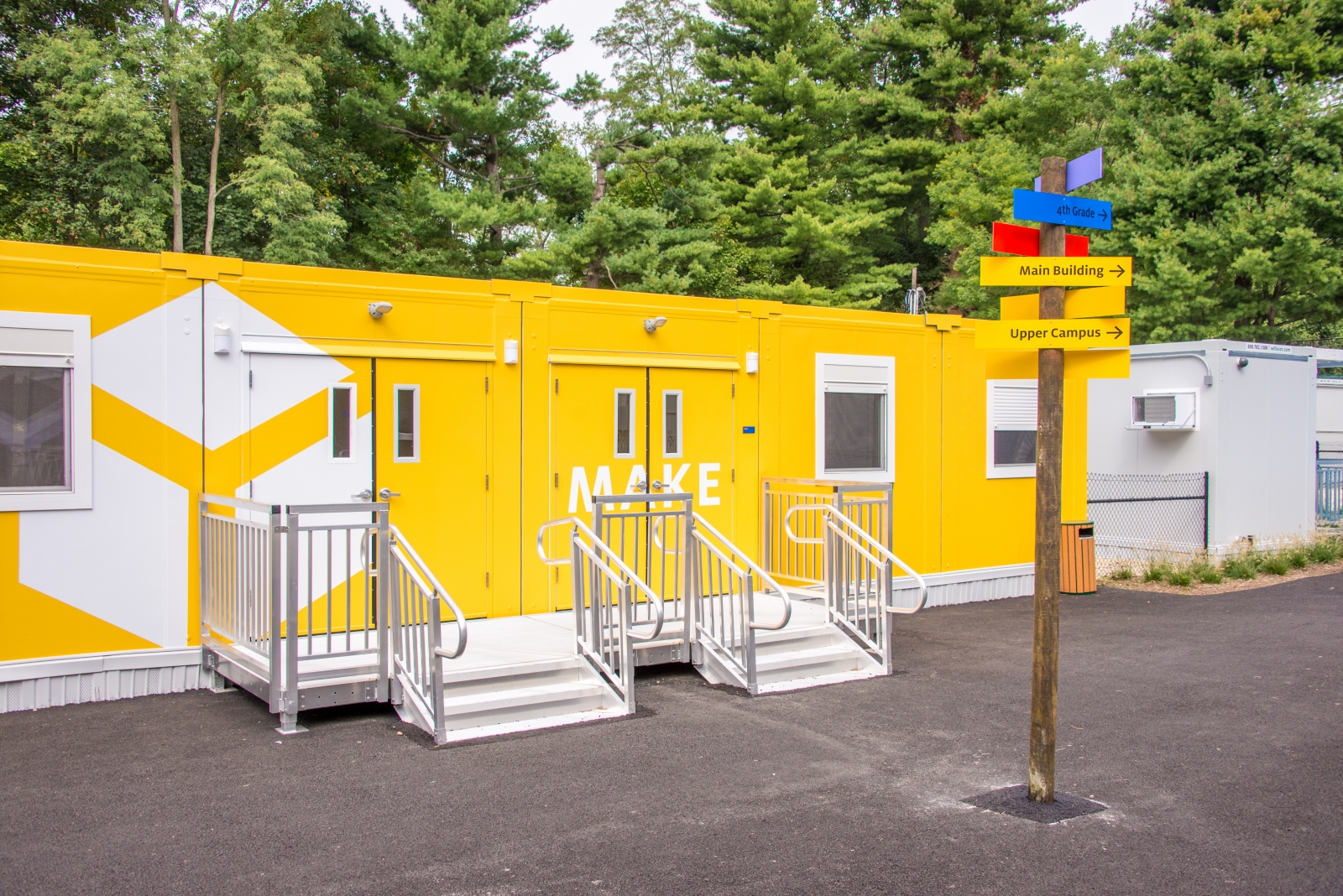 To reinforce the idea of a shared identity, the designers thought to involve the kids in shaping their temporary campus. During a fun voting process conducted by Open, which was tapped to develop the project’s graphic identity, kids chose colors, patterns, and motifs to decorate the facades of the plain Williams Scotsman classroom trailers.

“With structures that are kind of ad hoc, you can have a lot of fun with things we can never do on the side of a permanent building,” says Open founder Scott Stowell. “When the results of the votes came back, we could not have predicted them. They’re very funny and interesting,” he adds. The winning motifs included a cartoonish turtle, a molecule, an anchor, an emoji peace sign, and a river to represent the Hudson River, which flows by Riverdale’s campus.

“Having kids get engaged with the graphic system of this conceptual temporary campground of sorts was part of the plan,” explains Yao. “Rather than it being this big inconvenience this school year, we really tried hard to show the kids, ‘OK, you’re the kids who will have this opportunity that no one else has ever had or will ever have again in this school.’”

Thoughtful planning of outdoor spaces was also an important feature in ARO’s design. Inspired by the school’s prime location in “the woods within the city”—as New Yorkers call the affluent Riverdale neighborhood—the architects treated the patches of ground between trailers like the future corridors of the soon-to-be-completed permanent Upper Learning Building. They prototyped efficient “circular spines” and walkways, emphasizing the students’ connection to the school’s scenic outdoor areas. 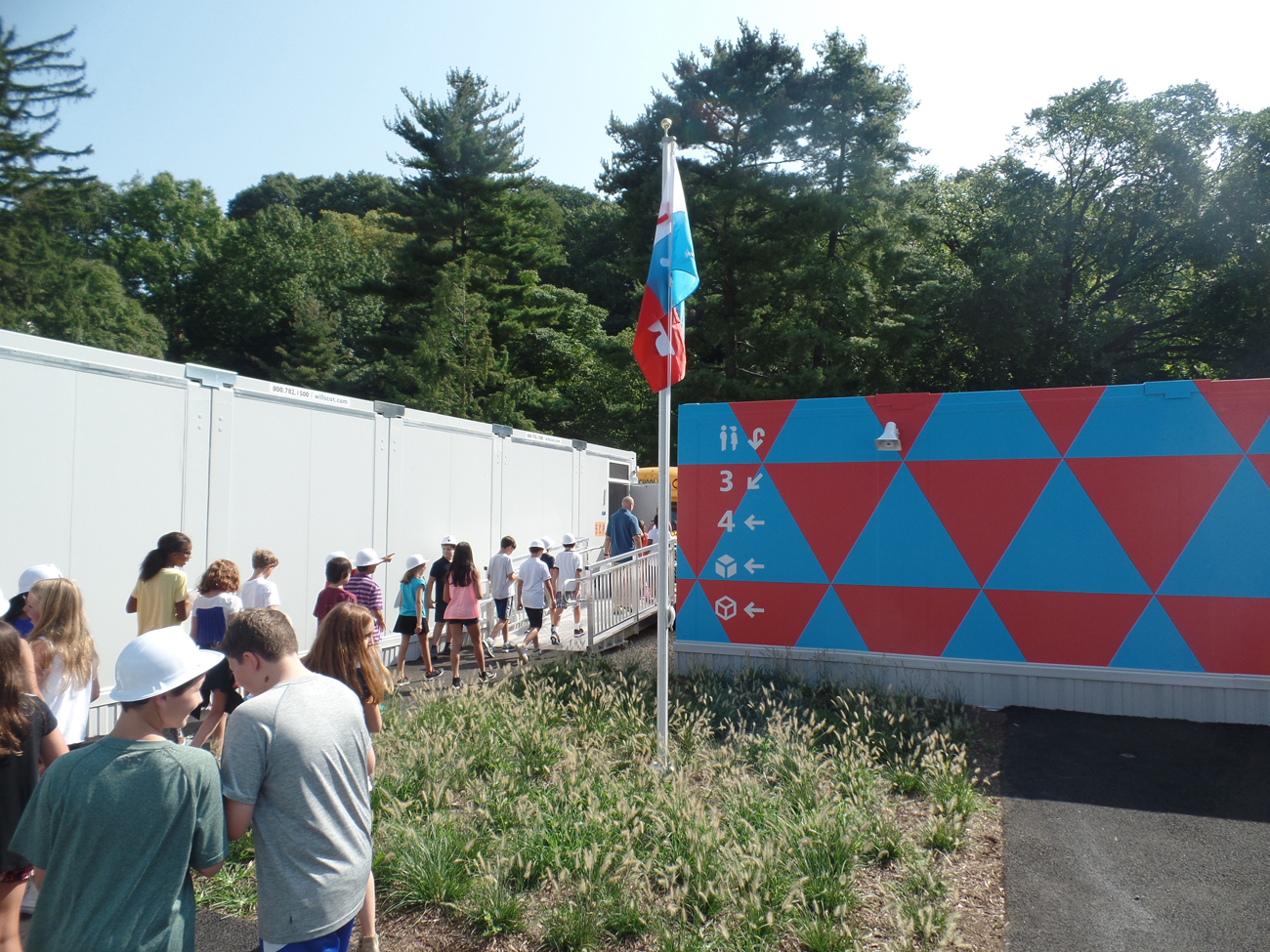 For a whole year, teachers and students used the colorful trailers of the complex as they intended to use their new school building—including flexible classroom layouts.

And at the heart of the Learning Complex were two creative labs with opposite personalities. The MAKE studio was a fully decked-out makerspace with every tool imaginable, from paints, sparkles, and stickers to drills and table saws. Over the course of the year, the students embarked on ambitious craft projects like making a PVC-pipe organ, a detailed diorama of the Hudson River, and a geographically accurate model of Bunker Hill to deepen their understanding of the American Revolution’s first major battle. Fifth graders also had a hands-on lesson in empathy-driven product design as they constructed special cardboard reading easels to help first graders. The project was inspired by 2015 MacArthur Fellow Alex Truesdell, who founded an organization making custom-fit furniture for children with special needs. The maker mentality of building and learning has proved so compelling for students and teachers that a replica of the MAKE studio will be installed in the permanent building.

Opposite the makerspace was a near-empty room called the LOOK space. Intentionally left blank or “unprogrammed,” the studio was used for impromptu group powwows and brainstorming sessions. As Randolph describes it, “it’s become a multiuse meeting room. It’s great to have that kind of space in the new building, too.” The school’s theater department has also made full use of the blank studio, using it as a backdrop for video productions, reconfiguring the space for any type of recording or performance.

From day one, with a charming bugle-call flag ceremony that welcomed the students at the beginning of the school year, to the last day at the campground last April, the Learning Complex met with universal affection from the school community. “Everybody loves it so much that I now have this anxiety—I hope they like the real building!” jokes Yao.

Everyone was indeed sad to see the special space cleared away, but the lessons from the Learning Complex remain with Riverdale’s students and teachers and are enshrined in the new building. 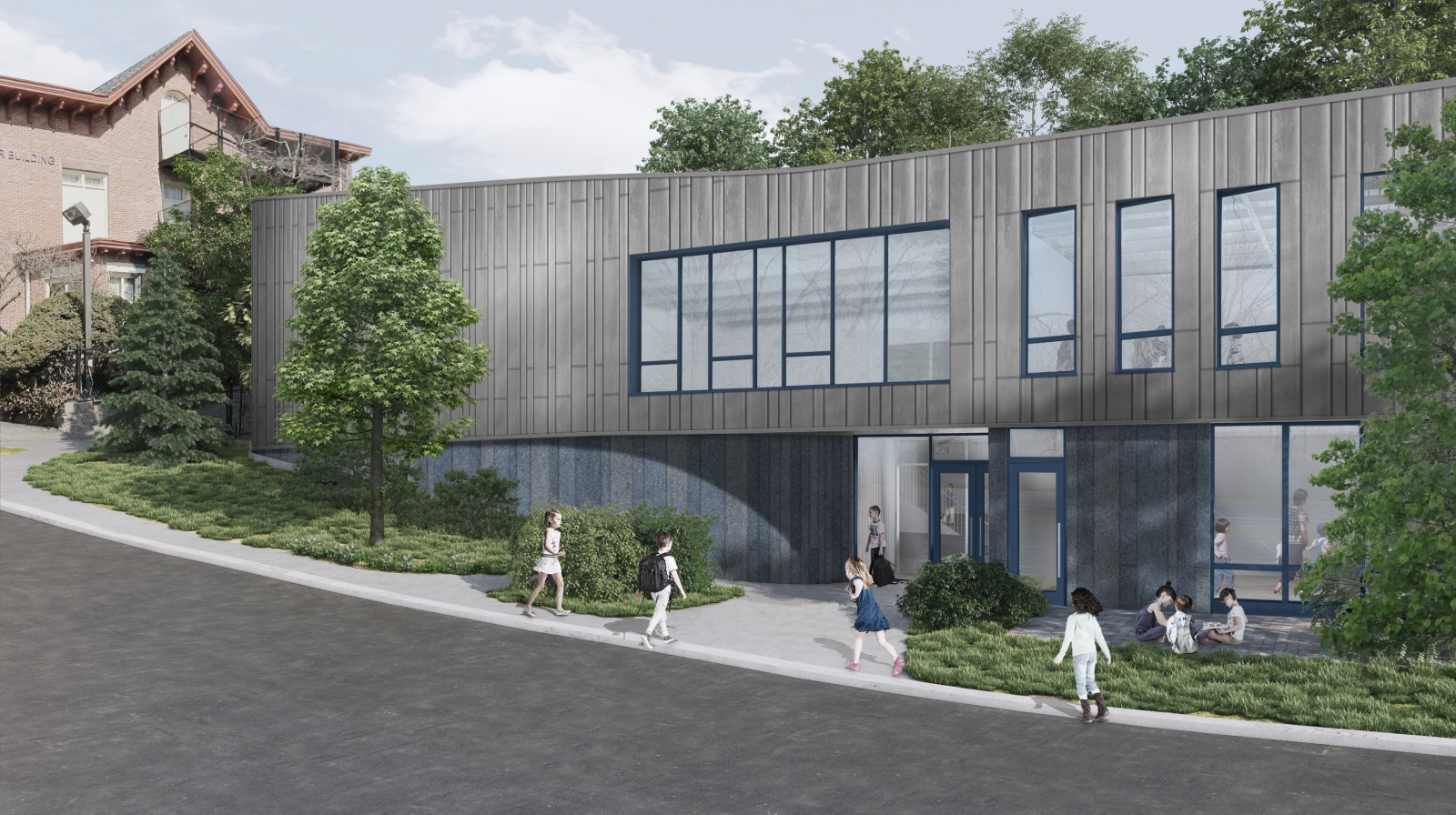 A number of facilities in Riverdale’s new two-floor, zinc-and-concrete Upper Learning Building correspond to ideas honed in the Learning Complex.

In a walk-through of the nearly completed 23,000-square-foot building slated to open this month, Randolph points to the refinement of some concepts prototyped in the Learning Complex. He notes the seating outside classrooms, pinnable boards, and shelves along corridors to encourage gathering, as well as large windows in classrooms that offer vistas of the surrounding woods to every seat in the room.

Like the LOOK studio, Riverdale’s new theater is an airy blank box with flexible seating but no permanent stage. “The old theater space used to be this proscenium stage,” recalls Randolph. He explains that the year’s practice with an unprogrammed multipurpose room allowed the teachers and students to practice the creative use of space and even expanded their repertoire. “I feel that the drama department is now primed to use that. Now they’re more excited to embrace more dynamic, impromptu performances.”

Randolph says that their vision is to use every surface and architectural feature as a teaching tool, from the choice of tactile surfaces to the sustainability information about the building printed on the walls like museum-wall text. “The in-between spaces are handled as carefully as the actual classroom,” he says. He is particularly keen about a row of skylights that will double as real-life science demonstrations for Riverdale’s young learners.

Surveying the rented trailers being cleaned and stripped of their colorful siding, Randolph says the exercise over the past year will help teachers and pupils make the most of the new facility. “I hope the Learning Complex was useful in how they understand and use this building.” 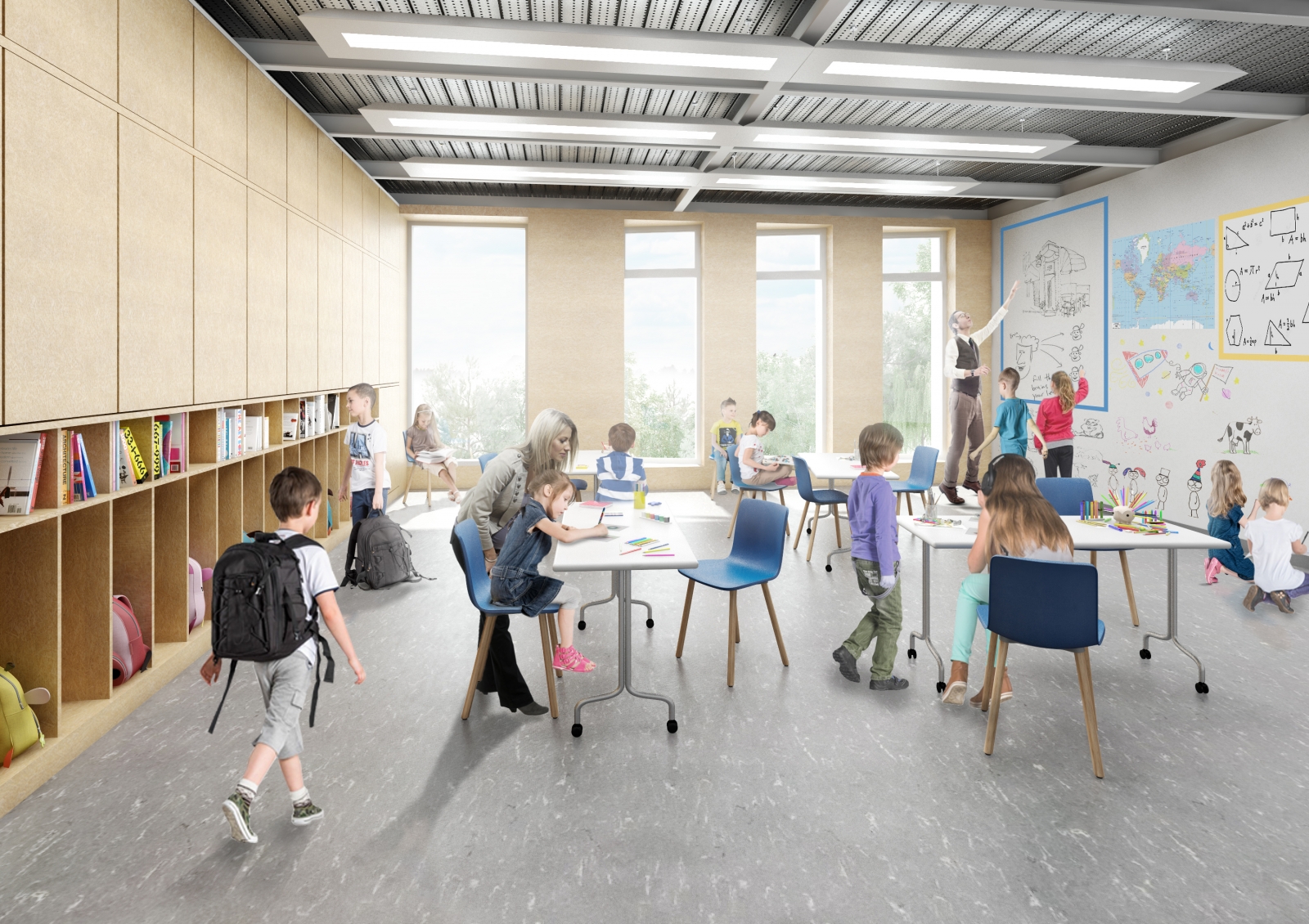 Classrooms in the Upper Learning Building will be flexible spaces, with a vital connection to the outdoors—with large framed views through the windows, and direct access to the patios, the green spaces outside, and the Hudson River beyond.