Science-driven design often has two goals, to address practical needs either through creating or advancing new technologies. The results can be tangible objects or a set of tools. At UCLA’s Center for Embedded Networked Sensing, (CENS), researchers are attempting to fulfill both of these goals. What’s even more interesting is that instead of simply using […]

Science-driven design often has two goals, to address practical needs either through creating or advancing new technologies. The results can be tangible objects or a set of tools. At UCLA’s Center for Embedded Networked Sensing, (CENS), researchers are attempting to fulfill both of these goals. What’s even more interesting is that instead of simply using 3D tools, these teams are developing new 3D tools and models, as well as new physical devices.

Take the Seismic Group at CENS. Their purpose is to predict earthquakes, eventually. It’s fitting for UCLA to undertake this task since California is well known for its severe tremors. But the truth is that earthquakes occur around the world. In fact, many of the projects being studied by the Seismic Group are based at active sites elsewhere. This dispersion allows the researchers to compare data from multiple test sites, ensuring accuracy while offering the benefits of their findings to their subject sites.

The group’s multidisciplinary approach involves computer science, electrical engineering, civil engineering, and earth and space sciences. Triangulating the expertise of each research field addresses the complexity of issues involved in earthquake prediction. How do they do this? By recording, sensing, mapping, and predicting the movement of plates and large buildings, smaller shocks and aftershocks, and eventually predicting main shocks and their impact. Here’s how the group describes its activities:  “Modern understanding of the earthquake source is that an aftershock sequence is a time-compressed version of long term seismicity. If there are repeatable predictive behaviors before an event, an aftershock zone is where we are most likely to measure them. By knowing the time and location of a large aftershock, as well as giving warning, we can instrument buildings and infrastructure to measure structural failure during strong shaking.”

One project maps slabs beneath the South American Plate in Peru. Dubbed “Peruse” for the Peru Subduction Experiment, this project combines teams at UCLA with their counterparts at Caltech, the French L Institut de Recherche pour le Développement, and Instituto Geofisico del Peru. 50 detection stations, spaced at predetermined intervals, are set up to collect movement data. This information is combined with topographic and gravity data. The goal is to pinpoint earthquake activity in the area more accurately, as well as to produce 3D topographic models of the entire region. 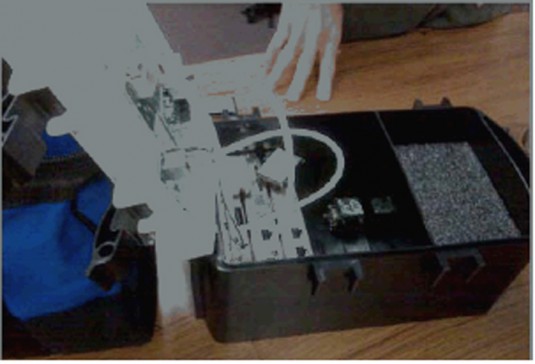 The ShakeBox project focuses on measuring the “structural response” of buildings and bridges after earthquakes have occurred. It uses wireless sensor networks (WSN), which until now have had limited practical applications because of limited processing capabilities, storage, and communication bandwidth. In response the team has designed the device to collect data and then use their ShakeNet, a network that monitors structures after earthquakes, to distribute that information. ShakeBox corrects for the limitations of similar devices, including a reliance on conventional radio communication as well as problems with time coordination, crucial for ensuring that the recorded data is accurate across a particular region. Thus the team addresses problems by designing a system with a weatherproof exterior casing that can be mounted anywhere, an internal power source, a system to compress data to deal with limited bandwidth, and they have devised a time-synchronization system that doesn’t rely on either GPS or USB. The resultant sensing system can more accurately record and distribute data for both emergency responses and future research.

The impact of such research is clear. Regions in South America, Southeast Asia, the Pacific islands, as well as the American Midwest, recently suffered devastating earthquakes. Many of these regions have both high population density indexes and less advanced trauma- and emergency-response systems in place and as such would be especially good candidates for these advanced technologies.