On the Road with the Rudy Bruner Award: Inspiration Kitchens Chicago

Following our site visit to Via Verde in New York City, we headed west to brisk yet sunny Chicago to Inspiration Kitchens – Garfield Park, submitted by its founder and sponsor, Inspiration Corporation Inc. The restaurant is located four miles west of the Chicago Loop in East Garfield Park, across the street from the 185-acre Garfield Park and one block from the Garfield Park Conservatory. Opened in 2011 the facility, located in one of the city’s most distressed neighborhoods, is a nonprofit, social enterprise that provides healthy, free meals to the working poor as well as workforce training. 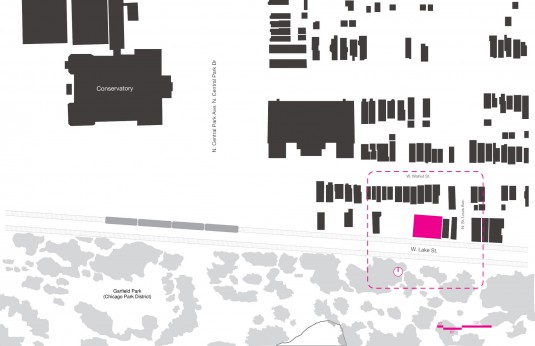 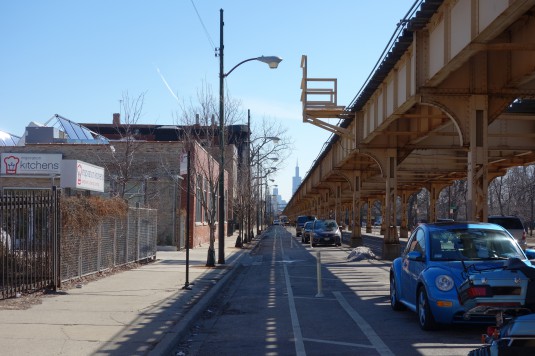 View looking past the restaurant toward the loop

Among the smallest of the 2013 Rudy Bruner Award finalists in size, Inspiration Kitchens – Garfield Park, like Congo Street Initiative and Via Verde, is a LEED Gold certified project and shares the intent of encouraging healthier urban living and sustainable development. During our two days on site, we met with Inspiration Corporation staff representatives from the community and city agencies, the design team, and program graduates to learn more about the project. We also sampled the food, enjoying three meals at the restaurant along with other diners.

Inspiration Kitchens’ restaurant, kitchen, and offices are housed in a single-story, 7,315-square-foot former factory alongside the Chicago Transit Authority’s elevated Green Line. Designed by Wheeler Kearns Architects, the renovated brick structure has a light and airy interior that takes advantage of daylight pouring in from skylights and large windows. The main dining room includes exposed brick walls and tables, and built-in benches and paneling made from salvaged wood. Large windows face the street and were designed to maximize transparency among the restaurant, kitchen, and community at large and to minimize sound transmission from passing trains. The project features an energy efficient kitchen exhaust, a solar thermal hot water system, and an onsite rainwater retention system as well as bike racks and shower facilities. 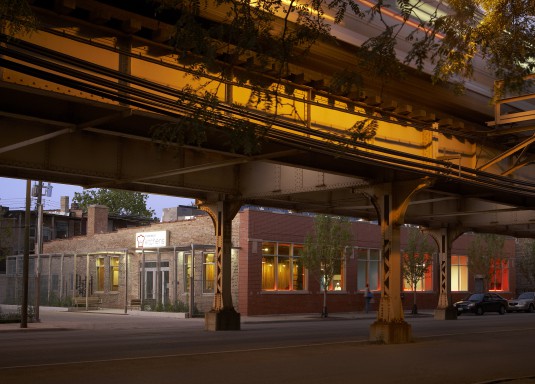 Large windows open up the former warehouse to the neighborhood.

The property includes a small parking lot and garden that, along with another community garden, grows produce used in meals prepared by the kitchen. The gardens and meals are intended to offer a healthy dining alternative in a community with little access to fresh food. The project’s sit-down restaurant offers a “Southern-inspired” menu of affordable, high quality meals prepared by graduates of the food service training program. They are available to market-rate paying customers and to local, low-income residents and families at no cost via a “Guest Certificate” program. Inspiration Corporation partners with local community organizations to distribute the certificates to residents who use them to pay for meals in the restaurant. 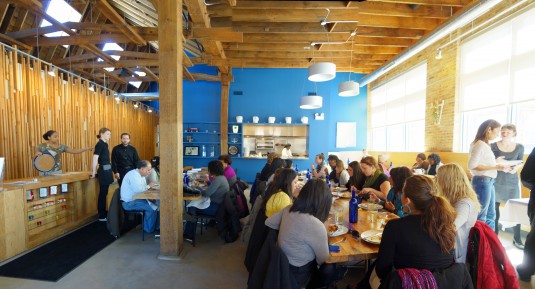 Founded by Lisa Nigro, a former Chicago police officer, Inspiration Corporation offers employment, housing, and support services to help those affected by homelessness and poverty move toward self-reliance. Under its aegis, Inspiration Kitchens offers an intensive 13-week job training program that enables homeless individuals, ex-offenders, and low-income persons to obtain employment in the food industry. The organization has provided a restaurant-style meals program since 1989 and operates another restaurant and food service training program in the city’s uptown neighborhood. 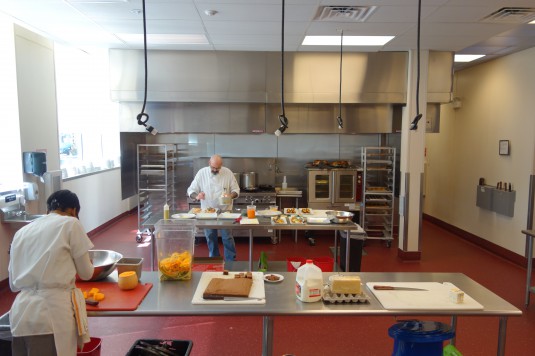 Activity in the kitchen is visible to passersby on the street.

The idea for the Garfield Park restaurant emerged as part of Inspiration Corporation’s 2006-2010 strategic plan that prioritized expanding services to the city’s west side. The organization solicited input from the community, public officials, nonprofit, and philanthropic leaders and targeted East Garfield Park as a place where its services could yield the most impact. Inspiration Corporation and its design team then worked with Garfield Park Conservatory Alliance and LISC Chicago’s New Communities Program – East Garfield Park to convene a series of community meetings to gather input that informed the design of the building and restaurant. 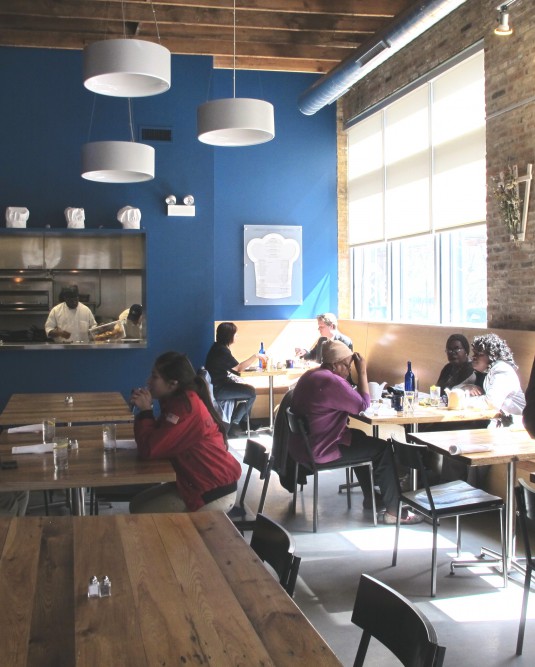 Funding for the nearly $2.5 million cost of purchase and construction was raised through a Catalyst Campaign that included a significant gift from a private donor and additional support for ongoing operating costs and an operating reserve. The project receives annual support from the City of Chicago Department of Family and Support Services. Inspiration Kitchens is one of seven “model kitchens” that are part of Catalyst Kitchens, a national network of organizations with a shared vision to empower lives by providing job training and quality food service, and revenue generation through social enterprise. While a bit off the beaten track, the Garfield Park restaurant has garnered local attention, including awards from AIA Chicago, Chicago Association of Realtors, Richard H. Driehaus Foundation, Urban Land Institute Chicago, and USGBC Illinois. 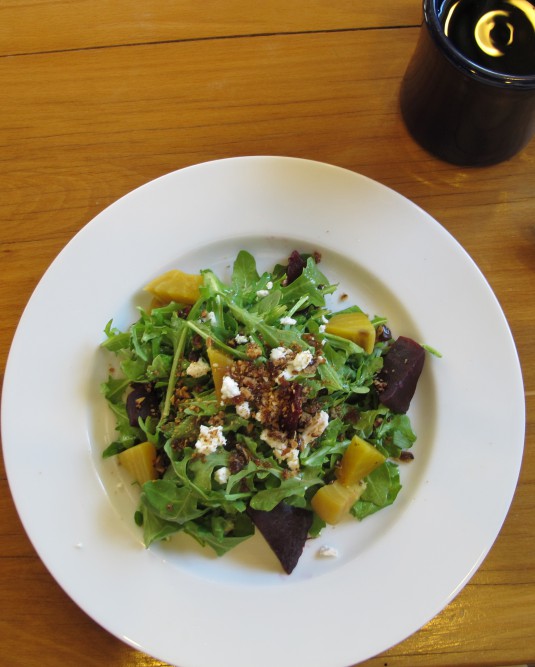 Dishes such as this beet salad feature fresh ingredients.

Anne-Marie Lubenau, AIA, is director of the Rudy Bruner Award for Urban Excellence (RBA) for the Bruner Foundation in Cambridge, Massachusetts. An architect and advocate for educating and engaging people in design of the built environment, she is a graduate of Carnegie Mellon University and was a 2012 Loeb Fellow at the Harvard Graduate School of Design. This series of posts, written and curated by RBA, focuses on placemaking in American cities. Upcoming blogs will offer a detailed look at the 2013 award selection process and site visits, case studies from past award winners, and highlights from events such as the Bruner-Loeb Forum.