Our Cups Runneth Over

There’s nothing quite like the lure of alcohol to drag New Yorkers from their homes on a cold, wintry night. That, at least, is the conclusion one might draw from the capacity crowd that showed up last Thursday evening in the basement of the Museum of Arts & Design for a lecture on the history […]

There’s nothing quite like the lure of alcohol to drag New Yorkers from their homes on a cold, wintry night. That, at least, is the conclusion one might draw from the capacity crowd that showed up last Thursday evening in the basement of the Museum of Arts & Design for a lecture on the history of the drinking vessel. Jennifer Scanlan, the curator of the current exhibition Cheers! A MAD Collection of Goblets, took a short and punchy detour through several thousand of years of boozing history, from the soused Classical Greek to the modern American lush. A summary: apparently, alcohol and sex have a long and well-documented relationship. Who knew?

One of the first images was of an ancient Sumerian couple in flagrante delicto, with the woman bent over and sipping beer through a long straw. Scanlan noted, “It’s possibly associated with a religious theme—I’m serious!” (There were titters.) “And it’s possibly also associated with prostitution.” As the slides went on, Greek satyrs danced across psykters (early bulbous wine coolers). There was the familiar scene of a toga-wearing youth vomiting as his friend looked on. Passing quickly through the Roman introduction of glass vessels (flavor doesn’t leach, liquids don’t leak), Scanlan landed on a bowl-like device from the early Middle Ages whose upside-down design required the drinker to quaff the liquid inside before setting it down. “Maybe the beginning of shot glasses?” she mused.

The sixteenth century, excitingly, saw the rise of the drinking game. Scanlan showed a puzzle cup from 1515 in which the wine would follow a circuitous and unpredictable route, and a windmill cup from 1570, which featured spinning blades that acted as a stopwatch. A little later on, the pass glass—tall, with notches going up the side—demanded special dexterity and timing: if the drinker didn’t drink exactly to the line, he would have to continue to the one below it. Spin-the-bottle had a precursor in an early-seventeenth-century clockwork drinking toy depicting the Roman goddess Diana on a silver stag; whoever the device pointed to would be obliged to drink from the deer’s head.

After the talk, the audience filed over to a table in the back, where sommeliers from Hudson Cafeteria had selected a Malbec and a Chardonnay for free tastings, and explored the goblets on display with a newfound curiosity. The exhibition’s pieces, many specially commissioned, filled a glass vitrine lining one wall of the basement. (When MAD relocates to Columbus Circle later this year, they will be moved to the new building’s lobby; see our article from last July about the design of the museum’s new home.) Dale Chihuly’s presence was strongly felt; apart from his own designs, two goblets actually portrayed the famed Washington-born glass blower. Both showed Chihuly’s trademark mass of curls, but, curiously, they differed on the placement of his eye patch. William Bernstein had it on the left side, while Lucio Bubacco seemed to think (erroneously) that it was on the right. There was no debauchery in evidence (cubed cheddar cheese seems to have a mollifying effect), but the sliced papaya was pretty wild. 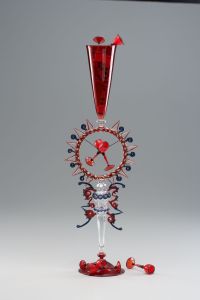 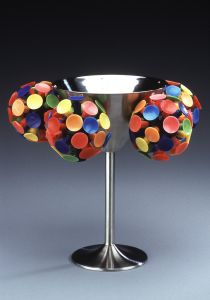 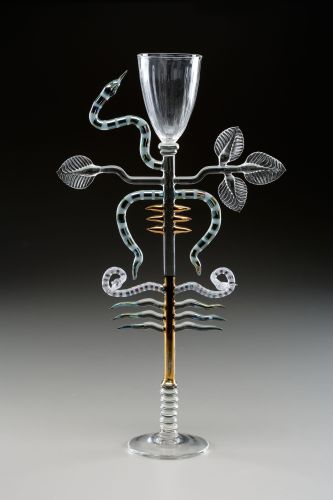 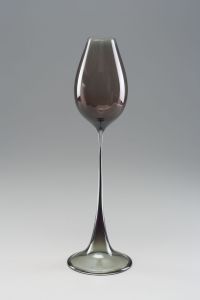 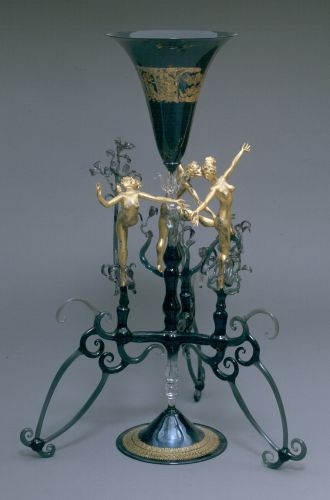