Reclaiming the City for Its People

A rendering from PALO Arquitectura Urbana’s proposal for La Boca, a working-class neighborhood in Buenos AiresThe Institute of Transportation and Development Policy (ITDP) celebrates its 25th anniversary this year with an ambitious new exhibition at the Center for Architecture, in New York. A year in the making, Our Cities, Ourselves presents positive, sustainable urban visions […]

A rendering from PALO Arquitectura Urbana’s proposal for La Boca, a working-class neighborhood in Buenos Aires

The Institute of Transportation and Development Policy (ITDP) celebrates its 25th anniversary this year with an ambitious new exhibition at the Center for Architecture, in New York. A year in the making, Our Cities, Ourselves presents positive, sustainable urban visions for ten cities around the world. Developed in close collaboration with local architects and policy makers, the visions are the true successors-in-spirit of such urbanist dreams of yesteryear as Futurama, but with one big difference—the automobile is conspicuously absent.

“Our cities are constantly engaged in a game of catch-up with transportation technologies that were developed with no reference to their form,” the architecture critic Michael Sorkin said in a roundtable discussion that preceded the exhibition opening last week. (Sorkin’s re-imagination of downtown Manhattan is one of the projects on display.) With city transport responsible for about a quarter of the world’s greenhouse gas emissions, the problem is obviously not just one of urban form. And things are only going to get worse: Over the next decade, 95 percent of urban growth will be in Asia and Africa alone, in cities that seem determined to replicate the car-centric model that has proven so disastrous in the developed world. Norman Garrick, a member of the national board of the Congress for the New Urbanism (CNU), quipped that his hometown of Kingston, Jamaica, is actually striving to be more like Miami. It is not easy to counter a cultural mindset where owning a car is a matter of pride.

Our Cities, Ourselves is meant to provide some alternative visions. “As China and India become increasingly motorized, we need to show them that technological ‘fixes’ are not the only way to solve ecological problems,” Walter Hook, the executive director of the ITDP, argued at last week’s  roundtable. “This is our effort to dream those dreams.” For this grand exercise in dreaming, the ITDP picked ten cities that were already showing some willingness to innovate: Ahmedabad, India; Budapest; Buenos Aires; Dar es Salaam, Tanzania; Guangzhou, China; Jakarta, Indonesia; Johannesburg, South Africa; Mexico City; New York City; and Rio de Janeiro. Each of these cities has a distinctive urban culture, a unique history that has shaped it, and, therefore, a different set of problems. But in each case the ITDP and its local partners were looking to provide city dwellers with a friendly, stimulating environment to replace the old model of urban design that was essentially created for cars.

Some of the alternatives are truly fantastic, such as Budi Pradono Architects’ space-age-meets-organic wonderland for Manggarai, a key transit hub in Jakarta (above). The blown-up rendering in the exhibition feels unreal, but the issues it addresses are all too real: an explosion in the number of cars, un-crossable streets, and a complete lack of pedestrian pathways. The other projects on display seem modest by comparison. For Ahmedabad, HCP Design and Project Management re-imagined a congested historic neighborhood, replacing choked, narrow paths with dedicated bus lanes and a public plaza. Budapest simply needed re-connecting with its waterfront on the Danube—a task that the architects, Varos-Teampannon and Kozlekedes, hope to achieve by reviving old tram systems and burying a defunct waterfront road. 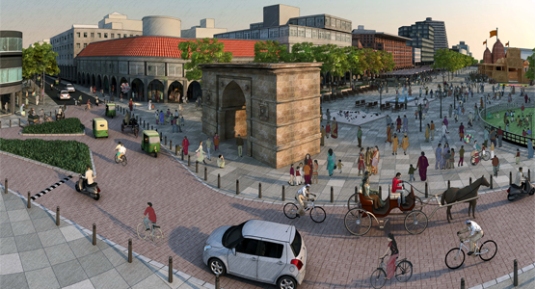 The differences in the scale of the projects are probably the best proof of the earnestness of the exercise. From its experience in helping set up Bus Rapid Transit systems in Ahmedabad and Johannesburg, the ITDP knows only too well that not all cities have the same tolerance or capacity for change. Sometimes smaller transportation fixes make the most sense; the exhibition includes a new load-carrying rickshaw developed in India and a better engineered version of the Indonesian pedicab, called a becak. But it also confronts the big picture, providing a set of “10 Principles for Sustainable Transport” formulated by Hook and the renowned urbanist Jan Gehl. Apart from encouraging good pedestrian infrastructure and public transportation, the list exhorts urban planners to “Get Real”—i.e., preserve the local natural and cultural assets of each community—and to “Make it Last” by building for posterity. 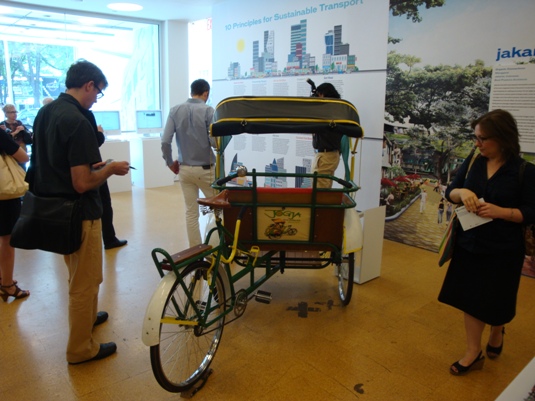 An Indonesian becak on display at the Center for Architecture 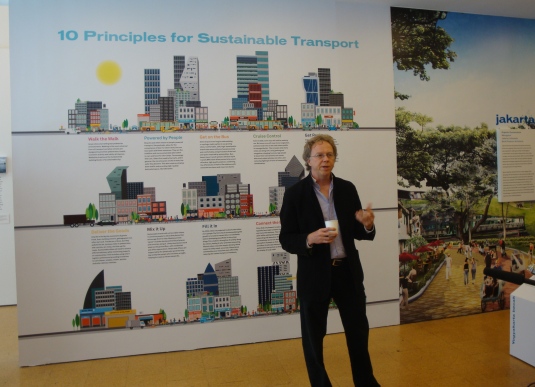 In all, Our Cities, Ourselves manages to strike a very persuasive balance between the utopian dream and the actionable plan. Changing mindsets and weaning cities away from a dominant automobile culture will be an uphill task whether it is in America or Indonesia. With luck, as the exhibition travels to each of the ten cities over the next year, its clever blend of optimism and pragmatism will convince local planners and policy makers to become catalysts of change—or, at the very least, to find better role models for urban growth than Miami and Detroit.