The Janus House looks to both the past and the future. 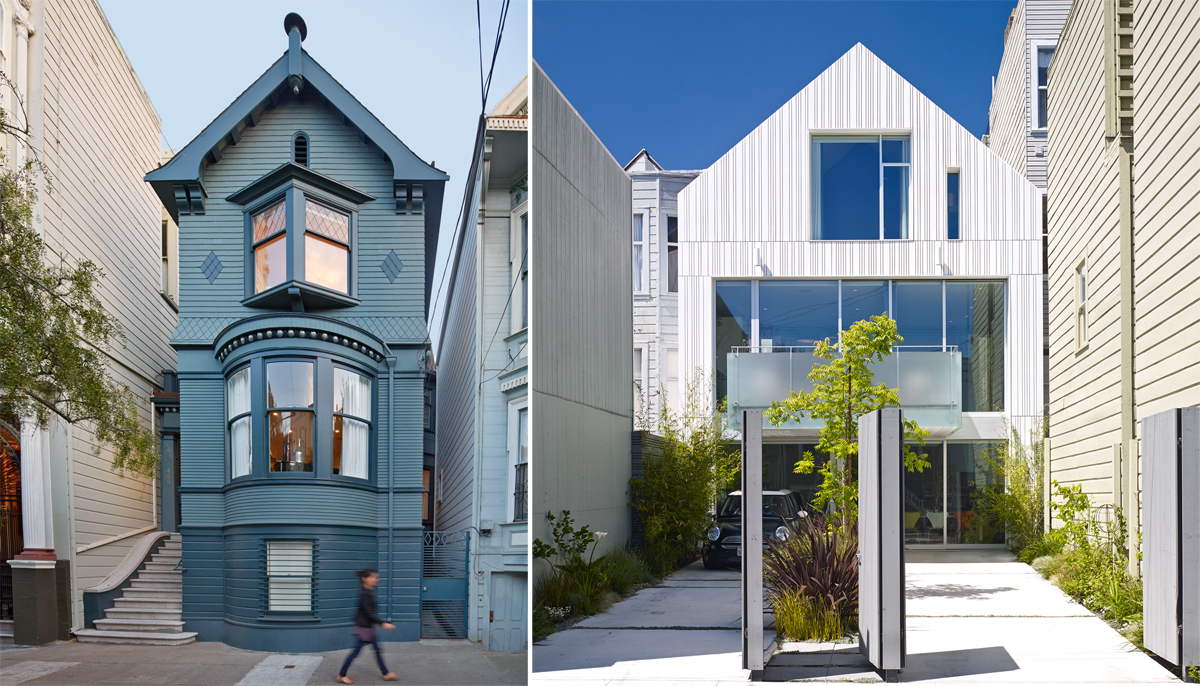 The Kennerlys’ response to historical renovation was two-faced—one facade of the Janus House (above, left) retains the home’s nineeteenth-century look while the other (right), clad in recycled plastic and fac- ing a car park in the back, is resolutely contemporary.

If you are well-versed in Ovid, you’d know that Janus is the Roman god of beginnings and transitions, the namesake of the month of January, and often depicted with two faces looking in opposite directions. So at face value, the Janus House in San Francisco, a pre-1900 home renovated by Owen and Serena Bowen Kennerly, works well with the mythological allusion.

The front is a polite, blue Victorian tucked neatly among its bigger and more ornate neighbors. Its second story oriel leads to a high gabled roof, its bay window overlooks a formal street lined with trees, and a terrazzo forms a front stoop, giving off the appearance of a quintessential San Francisco row house.

The back half is sleek, minimalist, and more in touch with the “post-punk bohemian” atmosphere of Lower Haight. White syncopated Azek (a recycled plastic) panels reach up toward the tall trianglular gable, the gaps between them a twist on traditional Victorian clapboard siding. A beautiful steel-framed deck cantilevers out from the second story and a big retractable glass wall makes the back of the house a welcome sunspot. “It is deﬁnitely very striking. It’s a facade with depth, more than just a surface. It’s a zone of space, stacked up like the layers you would see on an ocean liner,” Kennerly says. 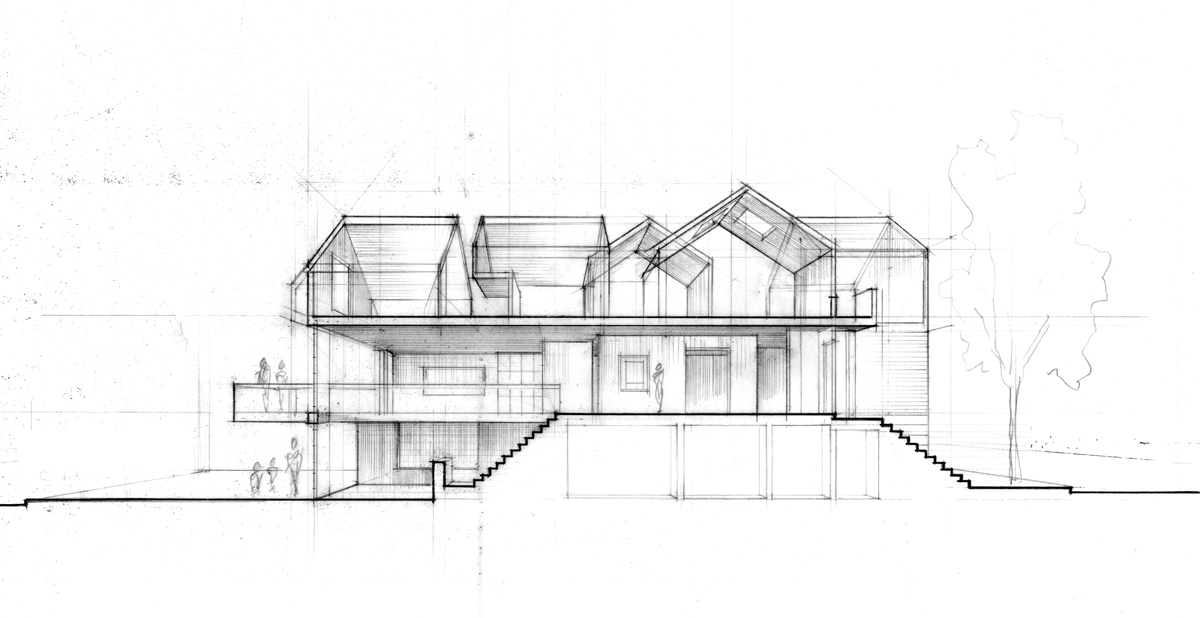 The house in section: The bottom level contains a common creative space; The middle level is an open living area with no doors and framed by the original steel structure (visible below); The upper level is carved into individual rooms for the members of the family.

The architect pointed to Bath, England, not Roman mythology, as the initial inspiration for the interplaying facades. “We wanted to keep the original integrity of the house,” which had remained relatively untouched since it was built (a date unknown because of the 1906 earthquake and ﬁre), “while opening the back end to something more innovative and more interesting,” he says. With Paul Rudolph’s work in mind, Kennerly and his team designed a house of transition.

Externally, the transition is obvious—from front to back. When considering the interior, Kennerly felt that homes that mix traditional and modern styles between rooms could be very jarring. “Instead, the transition occurs between levels,” he says, “a shift in lifestyle ideas between top and bottom.”

The idea for the main ﬂoor was to create an open space with the intimacy of a home. The wide rooms have two entryways and no doors between them, allowing the unimpeded ebb and ﬂow of family life. Steel beams run across the white ceilings and walls like a metal ribcage, holding up the new shape while protecting the old Victorian heart.

The bottom level embraces the creativity of the family—there is a small homework station, bookshelves with novels and board games, and a chalkboard wall that is shared by the art studio garage. On the top ﬂoor,
Kennerly made room for the family of ﬁve’s idiosyncratic personalities.  Each space has a different feel: one with a modern over-loft, the other with a barn loft and spiral staircase, the master bedroom with a magniﬁcent burnt-orange standalone wall.

But why a house of transitions? “It just made sense with the way they would live,” Kennerly says. Family life is always in transition—the two girls will eventually be in high school; in the blink of an eye the high schooler will be coming home from college for the weekend. This home is a place where book reports will become midterms, and nows will become remember-whens. And, through it all, the two faces of Janus will keep watch. 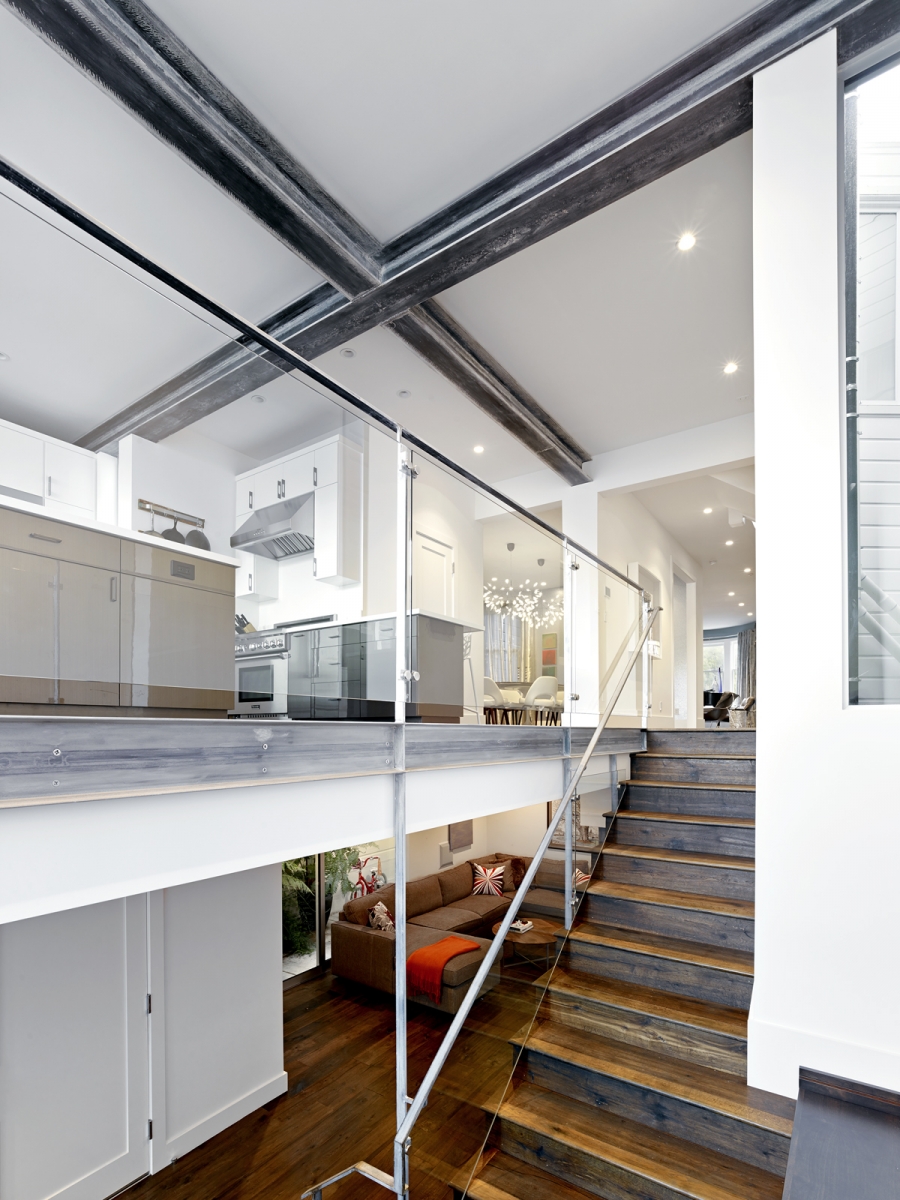 The interior of the house has a bottom-to-top gradation of shared and personal spaces.