The Green Team Part 6: The DIRT on Holiday Plant History

Fun Facts to Light Up Your Holiday Season!

We interrupt our Tree Tagging series to bring you this special post…Our Green Team wanted to share some of the more interesting holiday plant facts we’ve uncovered so you can impress your family, friends, and colleagues while sipping on a poinsettia (1/2 ounce Cointreau, 3 ounces cranberry juice, and a champagne float) and enjoying a handful of chestnuts (Castanea sativa) at your festive upcoming gatherings.

Evergreen trees have been a symbol of the season since the sixteenth century, but the Germans were not likely thinking about the evergreen tree market as a booming winter business. Approximately 30 million trees are sold over the holidays each year in America. Where do all of these trees come from?  The bulk of the U.S.’s crop (98 percent, to be exact) comes from tree production farms, with Oregon topping the list of acreage dedicated to holiday trees. In 2007, the total farmed acreage was equivalent to nearly 40  New York Central Parks!

The Mystery of Mistletoe

Much like an overeager paramour kissed under the mistletoe, the seeds of this plant (Viscum album in Europe and Phoradendron serotinum in North America) “stick” to a host plant after being transported by birds. Mistletoe is parasitic and lives off a variety of tree species by extending a proboscis-like root structure into a branch, through which it pulls nutrients and water. This sapping of nutrients can weaken the host plant and occasionally results in death. Due to its parasitic nature, mistletoe can only be cultivated by seed. So, be careful who you kiss this season, or you might find yourself with a draining new attachment of your own. 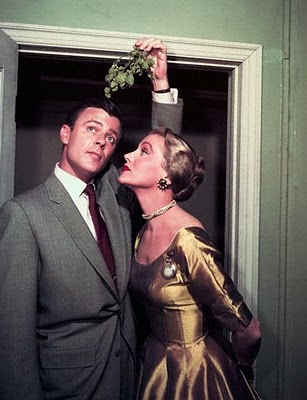 Royal ambassadors in ancient Rome were known to carry mint sprigs in their pockets, because the aroma of peppermint (Mentha x piperita) was thought to prevent a person from losing his or her temper. Today, peppermint oil is used in a variety of home remedies, mainly as a calming agent to soothe an angry person or upset stomach. Remember to have your peppermint candy cane in hand to keep your cool while holiday shopping!

The holiday tradition of ugly sweaters wouldn’t be nearly as irritating if it weren’t for their scratchy wool. When Australian sheep farmers started planting non-native species of clover (Trifolium sp.) in the 1940s, they observed a heartier clover crop, but at the cost of decreased sheep flock sizes. It turned out that the more vigorous, non-native clover contained an endocrine disruptor that lead to the sterilization of the sheep and therefore,  notably reduced flocks. The clover’s self-defense mechanism, while extreme, is certainly something to ponder over a glass of eggnog at your yuletide family function. 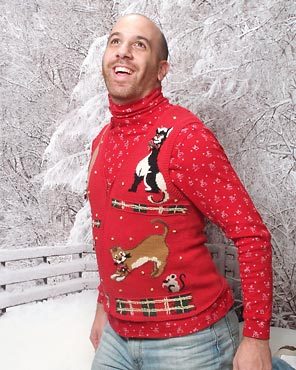 Your Daily Dose of Pine Sap

When winter holidays come around, chapped lips usually aren’t far behind. The solution? Seek the nearest pine tree for a dose of sap! The sap generates a protective coating that retains body moisture, which aids in making your lips kissably soft for meetings under the mistletoe.

The Darkest Day of the Year

As the shortest and darkest day of the year, the winter solstice definitively marks the changing of the seasons. Certain plants respond to day length (or more appropriately, night length) in direct ways, as evidenced by everyone’s favorite fall bloomer, the chrysanthemum. Have you ever wondered why chrysanthemums bloom so late into the cold season? It is because they are photoperiodic or “long-night” plants, meaning that they will only begin to flower if exposed to a critical amount of darkness. Buds begin to form on the mum after June, when nights become increasingly longer, leading up to the winter solstice.

Poinsettia (Euphorbia pulcherrima) is known for its red, white, and green holiday colors.  Did you know that the red, white, and sometimes pink tops of the plant are not actually flower petals, but bracts? Bracts are the uppermost leaves of the plant. The flowers are actually quite small and located in clusters between the bracts. Similar to the poinsettia, the “flowers” of many dogwood trees, which boast a popular bloom marking the beginning of spring, are also bracts. This includes the flowering dogwood (Cornus florida) and the Kousa dogwood (Cornus kousa). When the winter frost breaks, look at the center of the four white or pink bracts of the dogwood to spot the species’ small cluster of flowers. 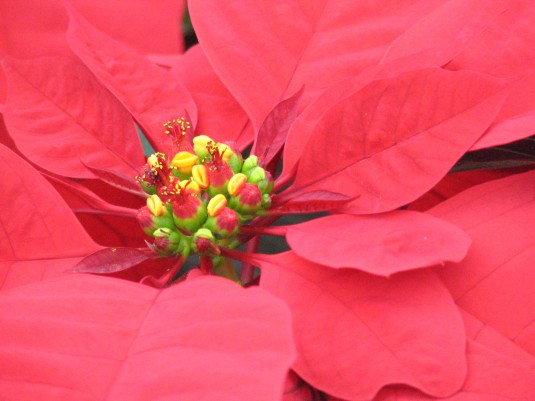 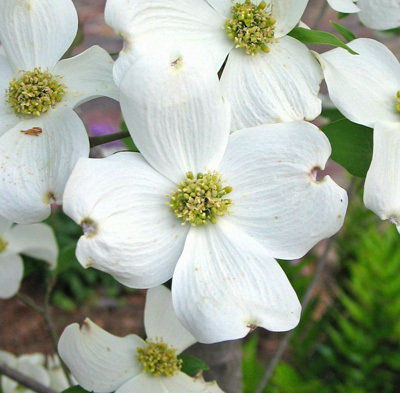 The Sweet Smell of Cinnamon

We often use cinnamon during the holidays to spice our eggnog or season the dreaded fruitcake. Do you know that cinnamon sticks are actually curled quills from the dried bark of evergreen laurel trees in the genus Cinnamomum? Egyptians were known to use cinnamon oil for the mummification process, and it has also been used for embalming due to its pleasing aroma. Two varieties of cinnamon, Cassia and Ceylon, are commercially produced in Indonesia and China and are often what we find at grocers today. 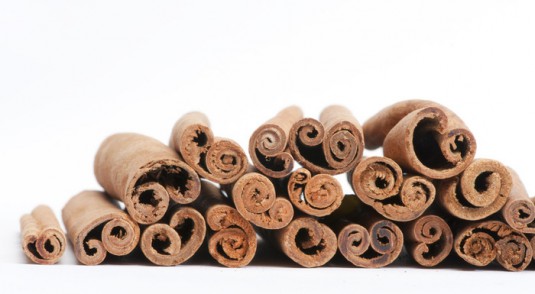 Chestnuts Roasting on an Open Fire

In 1946, Nat King Cole was the first to croon “The Christmas Song,” with its lyric about chestnuts roasting on an open fire, but we bet he didn’t know that chestnuts are an excellent source of minerals. An abundant amount of potassium is found in chestnuts, which helps to lower heart rate and blood pressure. So, before spending the holidays with the in-laws, snack on a handful to help maintain your blood pressure…and perhaps have another handful afterward! 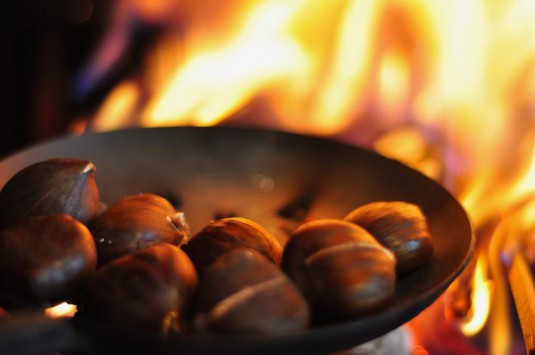 So, while you are sipping on your cocktail of choice at a rollicking party or simply sitting next to the tree this year, do remember these fun facts associated with your favorite holiday traditions. To kick off the New Year, the Green Team will return to the nuts and bolts of the landscape architecture world, when we will let you in on the intricacies of moving plant material from field to site.

Terrie Brightman, RLA, ASLA is a practicing landscape architect at Mathews Nielsen Landscape Architects in New York City with over eight years of professional experience. Since receiving her BLA from The Pennsylvania State University, she has worked on riverfronts in Pittsburgh, private residences in California and Florida, a sustainable community in Turkey, and multiple public parks, plaza and waterfronts throughout New York City, most recently Hunts Point Landing.

Lisa DuRussel, RLA, ASLA, LEED AP is a Midwestern transplant, avid coffee drinker, soils enthusiast, and practicing landscape architect in New York City. Since receiving her BS and MLA from the University of Michigan, she has worked on numerous urban revitalization and cultural landscape projects in the New York and Chicago areas, including the Governors Island Park and Public Space project.

Zeina G Zahalan, ASLA joined Mathews Nielsen in January 2012. She holds a bachelor of science in landscape architecture from Rutgers University. While pursuing her degree, Zeina worked extensively on streetscape and community garden designs for Community Development Corporations in New Jersey. She is the recipient of the Roy deBoer Travel Grant, the American Society of Landscape Architects Council of Fellows Award, the New Jersey American Society of Landscape Architects Honor Award, and the New Jersey Past President’s Award. This is one in a series of Metropolis blogs written by members of Mathews Nielsen Landscape Architects’ Green Team, which focuses on research as the groundswell of effective landscape design and implementation. Addressing the design challenges the Green Team encounters and how it resolves them, the series shares the team’s research in response to project constraints and questions that emerge, revealing their solutions. Along the way, the team also shares its knowledge about plants, geography, stormwater, sustainability, materials, and more.