‘The Little Prince’ and Le Corbusier

What does the modernist architect have to do with the children’s classic?

On October 22, 1929, a French architect got on the inaugural flight of the Aeroposta Argentina, a pioneering airline service that flew from Buenos Aires to Asuncion del Paraguay, flown by a French co-pilot. The act of flying would deeply influence the creative output of both passenger and pilot.

The former, of course, was Le Corbusier. The latter was Antoine de Saint-Exupéry, later to be famous as the creator of The Little Prince (1943), the well-beloved tale of a planet-hopping, fox-befriending, flower-loving space child.

An ongoing exhibition at the Morgan Library and Museum in New York is titled The Little Prince: A New York Story but turns out to really be about Saint-Exupéry. It’s a gorgeously tactile show. The author created multiple versions of every illustration in the book in watercolors that dampened and buckled the fidelity onion skin paper he worked with. He wrote nearly 30,000 words in all, in sentences that seem to unravel, stagger, stumble, and then simply scrawl off the page.

As one walks from one sepia-toned framed page to another, the sentimentality of it all is overwhelming. It’s hard not to get emotional about this tortured man and the fascinating worlds he inhabited—inside his head, in New York society, and in the fictional planets in his book. The near-mysticism of the wall texts guarantees goose bumps. Sunsets are mentioned 44 times in the book and Saint-Exupery disappeared after flying off into a sunset in 1944, at age 44. 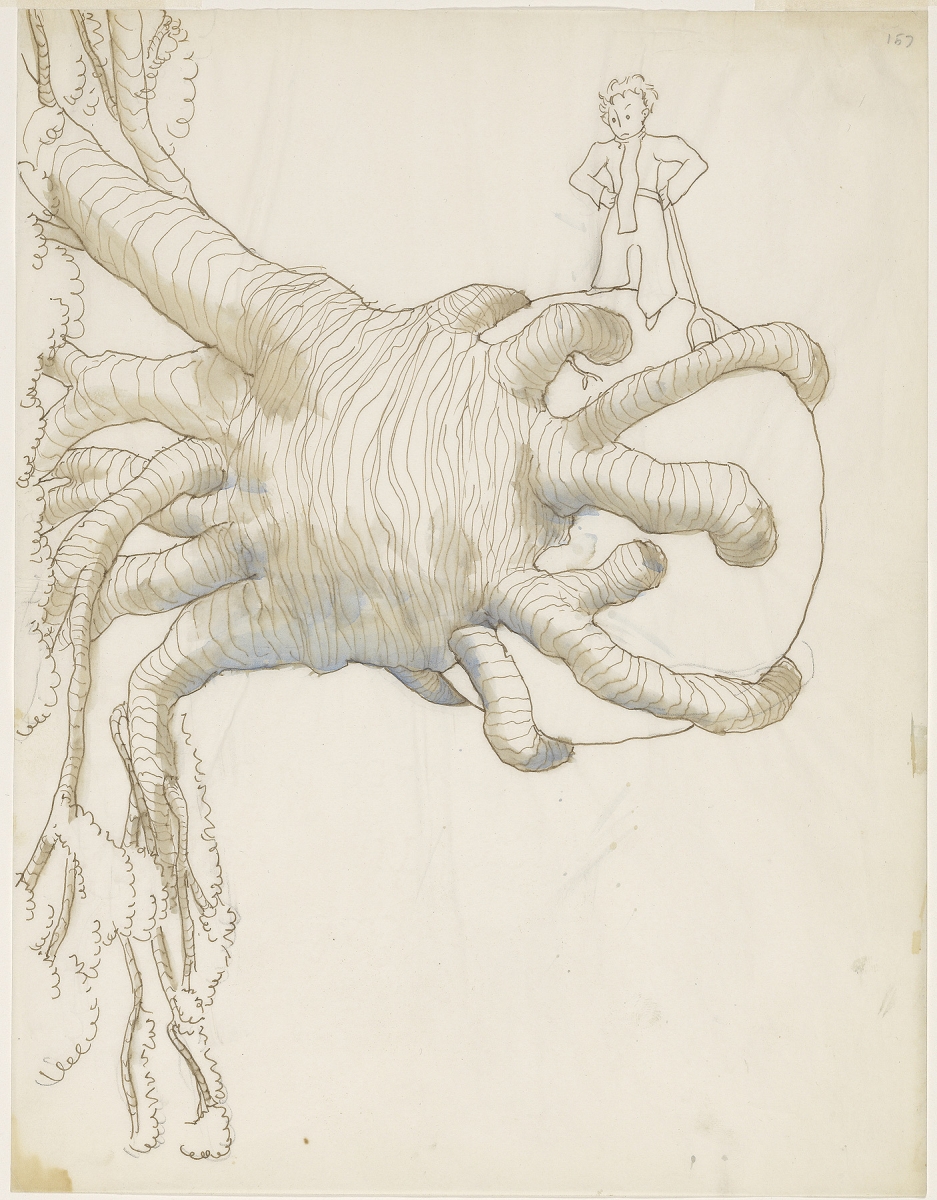 The aviator’s tenuous connection to architecture history is elbowed out of this exhibition by the more colorful details of his life (flying missions in North Africa, advocating for the Jews in Vichy France, hobnobbing with the Lindberghs) but it does make for an interesting counterpoint to Saint-Exupéry’s world-view.

Le Corbusier’s primary takeaway from air travel was a new way of seeing. Writing in his book Aircraft (1935) he says: “During the publication of L’Esprit Nouveau [the famous aesthetics journal the architect founed with the artist Amédée Ozenfant] I used with a timely impatience the phrase ‘Eyes which do not see ! …’ and in three articles I cited as evidence, steamships, automobiles, and airplanes. The point then was that our eyes did not see. . . . Did not see the budding of a new feeling for plastic beauty in a world full of strength and confidence. But today it is a question of the airplane eye, of the mind with which the Bird’s Eye View has endowed us; of that eye which now looks with alarm at the places where we live, the cities where it is our lot to be. And the spectacle is frightening, overwhelming. The airplane eye reveals a spectacle of collapse.”

One of the reasons for this change in attitude—which no doubt influenced Le Corbusier’s urbanist ideas—is that between L’Esprit Nouveau and Aircraft, he actually got into a plane, with Antoine de Saint-Exupéry. 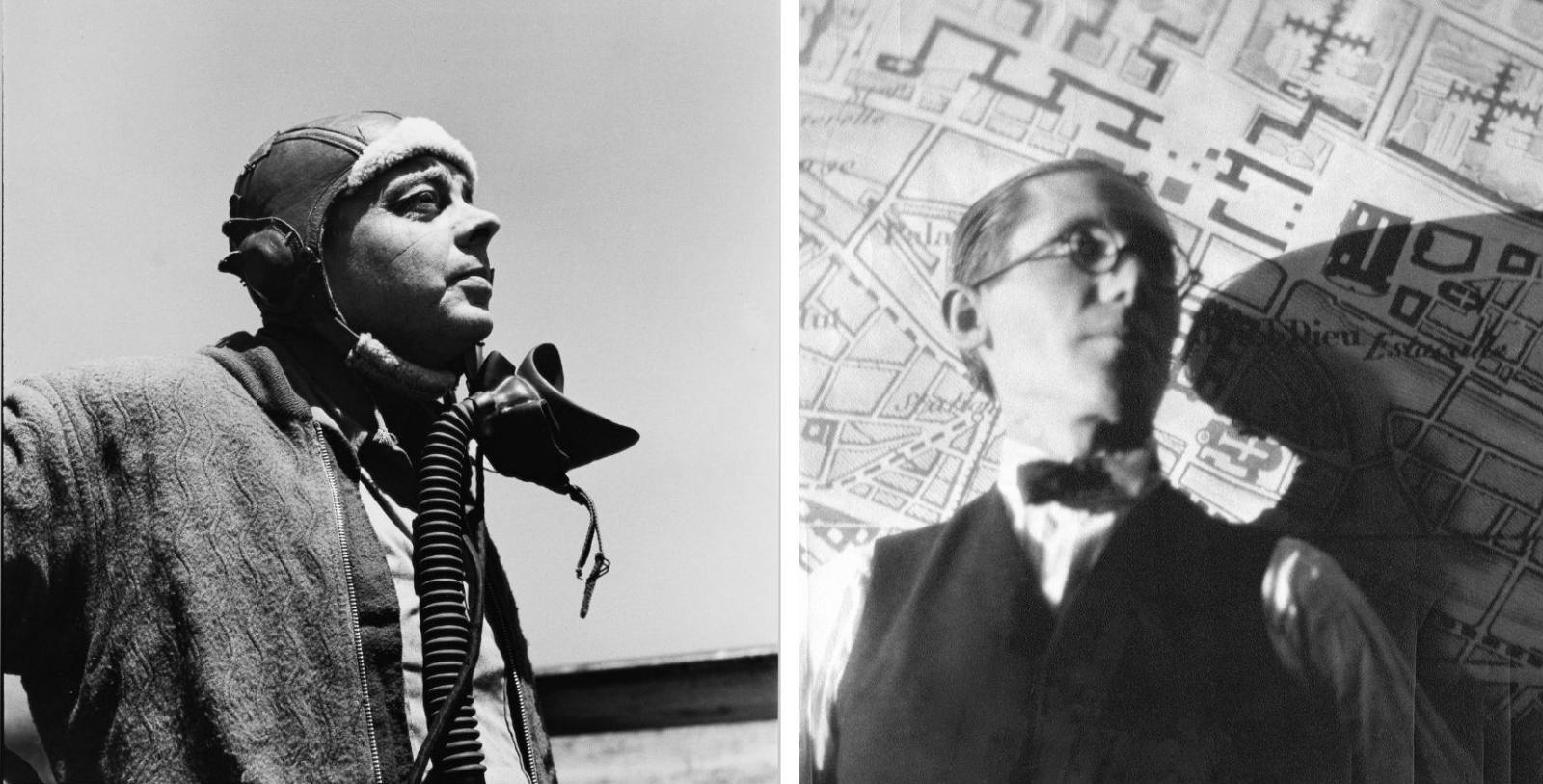 In The Little Prince, Saint-Exupéry insists again and again that there are some things that just cannot be seen. A helpful wall text in the exhibition states just how many times, and in how many different ways, he states this central idea. A drawing of a hat could just as well be a drawing of a boa constrictor that has swallowed an elephant. Seeing a city from a bird’s-eye view may not be the best way of planning it. In any case, it is clear that for Saint-Exupéry the experience of flying was about looking up at the stars, not down at the war-torn world he might have to land in.

The architect and the author might also have disagreed about the role of technology in this world. Le Corbusier’s machine metaphors are well known—“A house is a machine for living in” being the most famous. Saint-Exupéry, who had seen war from up close, wasn’t quite as happy with gadgetry or industry. The little prince visits a number of planets in the book, all inhabited by unhappy, unsatisfied people. One such planet that Saint-Exupery created, but later removed, was inhabited by an inventor whose contraption can fulfill any desire. The prince is rightly suspicious of this kind of “push-button bliss.” 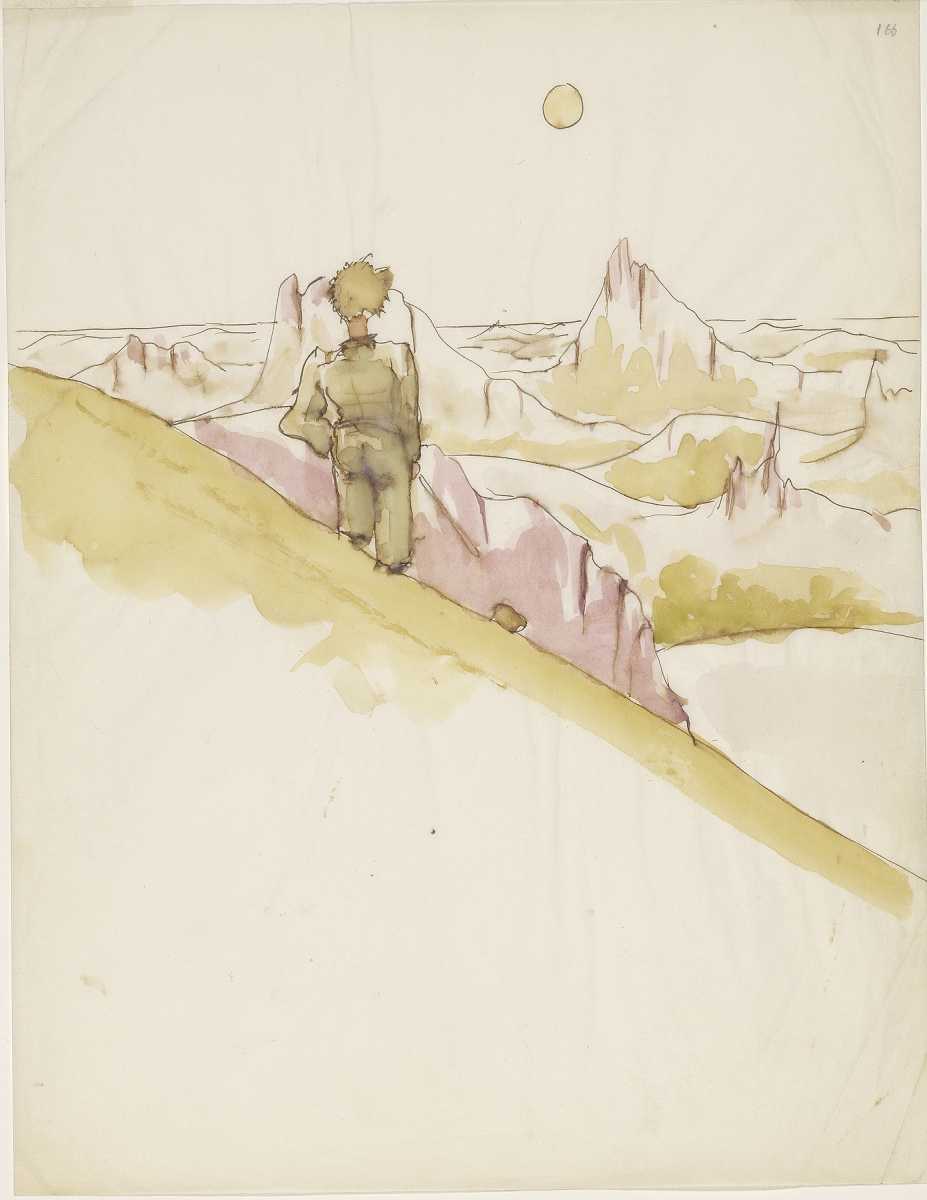 Despite these differences, the passenger and the pilot were united by their love of drawing. Le Corbusier’s 1929 flight resulted in beautiful sketches and plans for Montevideo and Sao Paulo, while Saint-Exupery had been drawing to express himself long before he embarked on The Little Prince. In some sense, the book itself, with its sketches of planets and deserts, of walls and strangers, can be seen as a journey towards the final, perfect drawing of the perfect place. It’s not much more than a landscape suggested by two lines, and a star in the sky, with the note: “I, who don’t know how to draw, have created the most beautiful drawing in the world.”

The Little Prince: A New York Story is open now at the Morgan Library and Museum and runs through April 27.