The Southern Porch That Knows no Bounds

An investigation of the roles the Charleston piazza plays in historic Southern architecture.

The Charleston piazza could easily hold the title for most regionally recognizable architectural flourish. Before talking about its impact, though, many might ask, “What is the Charleston piazza?” In its simplest sense, it is a porch. But for generations of Southerners it was and is so much more than that. Like many other porches it became another room beyond the confines of traditional walls for families to bond, entertain, and live. According to Carl Lounsbury, the senior architectural historian for the Colonial Williamsburg Foundation, the archetype for the Charleston piazza came from the Chesapeake region where an early example can be found at the College of William and Mary. The term was borrowed by the English from the Italian word meaning “open space” and eventually made its way to the new world with the rest of the colonial architecture. The final step to create the truly unique Charleston piazza was a result of city planning. The residential lots between the 1730s and the American Revolution were very narrow in the city, resulting in deep houses that were not very wide. “Gradually, the construction of piazzas along one of the long sides of the houses made it possible to reorient the main entrance into the house… through a gate onto the piazza and then down the porch to the doorway in the middle of the house where the stair passage was located. This made for a more private house with little direct access from the street–more restrictive–more private,” said Lounsbury. 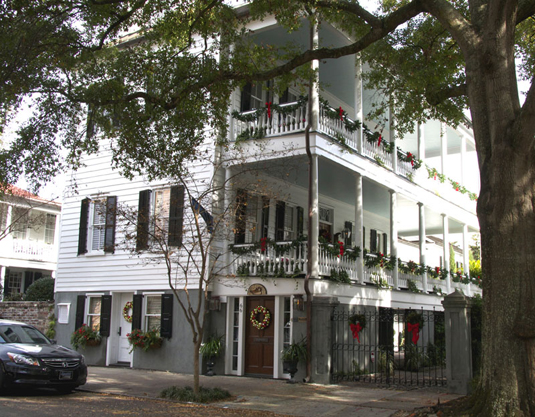 The piazza has not been left in the past, however. One local architect who specializes in historic buildings, Jonathan Thompson, LEED AP, of Thompson Young Design, has not forgotten its use as a sustainable design element. “In my opinion, the piazza as we know it evolved based on the long and narrow lot configurations of Charleston and it’s orientation to the south or west, along with its well-conceived width and height, serves to protect from the high summer sun and invite the lower winter sun,” said Thompson. Though piazzas are harder to find on modern feats of architecture Thompson said that the large overhangs of the Barcelona Pavilion by Mies Van Der Rhoe could be interpreted as a modern representation of the design principles of the piazza. 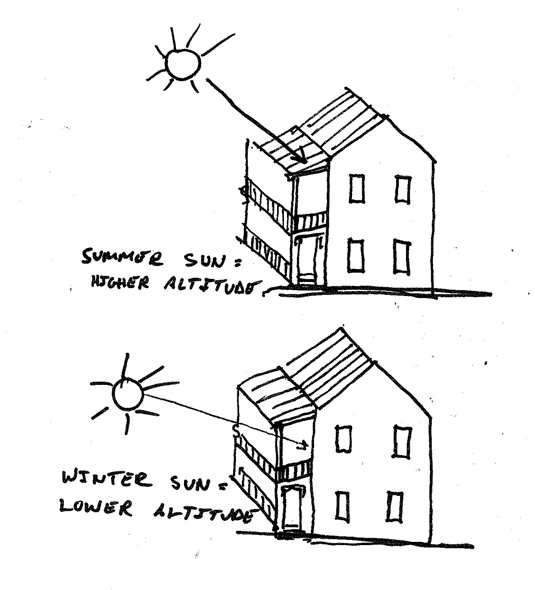 The piazza deserves a cultural and practical resurgence as both an homage to its historic relevance, but also because of the energy efficiency it can provide in relation to the sun’s path and its ability to enhance the human circulation of the increasingly cramped living spaces of the urban landscape. Yes, central heating and air has somewhat negated their original purpose, but rare is the air conditioning unit that can mimic the natural comfort that comes from feeling a summer breeze on the nape of one’s neck. The piazza has one further use that cannot be empirically identified as the rest can: warding away spirits. The ceilings of traditional piazzas are painted what is known as “Haint Blue” seemingly to mimic a sky, but with darker implications. The particular hue is said to keep away wicked supernatural elements. It may come from local Gullah culture, according to Thompson, but he did not dare try to explain further. Whatever the case, be you scientific minded or a little superstitious, the particular brand of piazza Charleston offers is a versatile design element that could be a great component of design in and out of the contemporary South. For more information on the history of Charleston you can also contact the Historic Charleston Foundation.

Rémy Thurston is a recent graduate of the University of Georgia’s Grady School of Journalism and Mass Communication earning a degree in magazine journalism. He currently works in publishing as an acquisitions editor. You can follow him on Twitter @remjb7. Photos by Rémy Thurston, sketch by Jonathan Thompson.