Hammering continues and excitement builds as the Biennale’s opening draws near.

With the public opening only days away some pavilions are almost finished while others still show no signs of activity. Those that didn’t get sidetracked by last weekend’s Regatta Storica or the Venice Film Festival have managed to finish on schedule. For the most part, the curators have finally stopped putting the finishing touches on every detail; no more meditating over the aesthetical importance of an inch as if their careers depended on it while workers remain precariously perched atop ladders, leaning to the point of falling yet still holding on, with only one question, “su o giu’” (up or down). 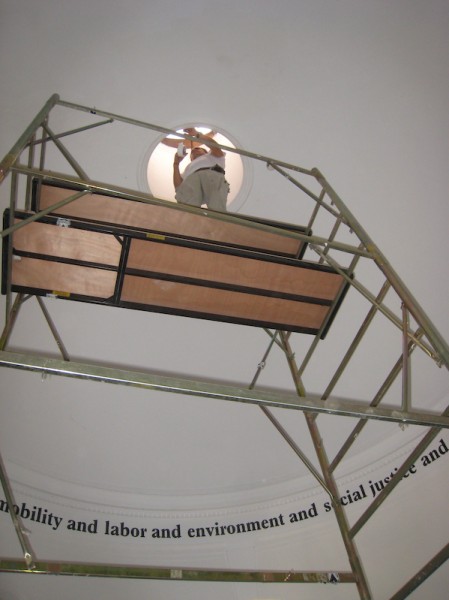 Applying the finishing touches within the American Pavilion 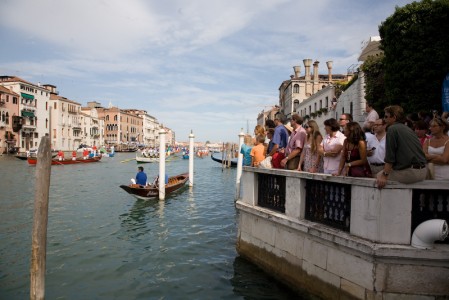 Spectators along the canal at the Regatta Storica 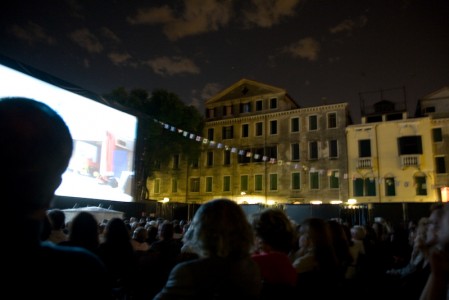 An outdoor cinema at the film festival

The Taiwanese have finished working and sleeping on their structures and they seem content having taken over most all of the transitional spaces of the Giardini. Their constructions continue to surprise and delight as well. The plastic containers are now the walls of what appears to be a giant flesh colored ball and other assorted inflated items that are extraordinarily out of proportion and once you get past the various phallic associations appear to be a sort of giant fun zone. Only time will tell but one thing is for sure, the lights they placed in the structures have a fantastic effect as night falls and will be a delightful addition come daylight savings time in the fall. 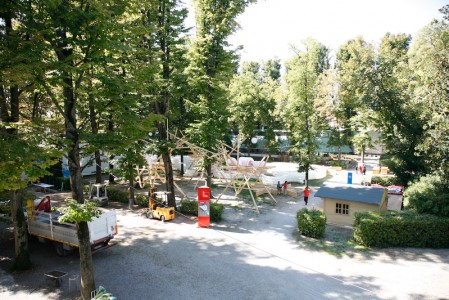 Overview of Giardini showing the Taiwanese installations (above) and one of the impressive incandescent structures at night (below). 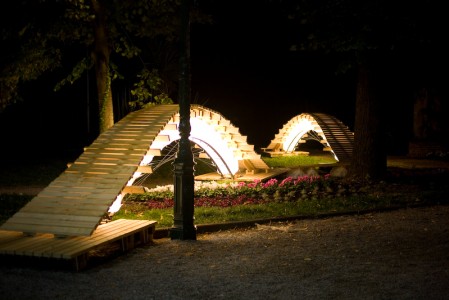 Unfortunately, the Australian Pavilion seems to grow more yellow every day. An early preview the other evening revealed that apart from the blinding exterior, the interior is fantastic and with approximately 300 models and a real slide show (That’s right, no powerpoint). They have real slide projectors creating sort of a cave of images as you enter that then opens onto the downstairs space of this field of models perched on steel rod pedestals almost resembling a field of sunflowers. If they can manage to make it through the next few months without jamming or breaking, the interior could be one of the best of the exhibition. But back to that color…It seems that a paint company is one of the sponsors to this year’s exhibition and created this new yellow color in their product line called “Abundant” (the name of the exhibition) so the curators were blessed with an endless supply of the paint and felt up to the challenge of proving that there is such thing as too much of a good thing. Their bags and graphics however seem to prove that the color can be used well…in moderation. But at least the Australians are finished. 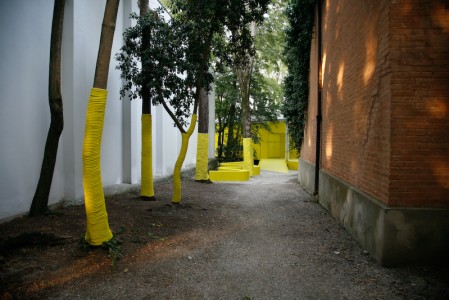 Yesterday the Serbians had a pavilion full of ipods but no batteries; the Uruguay Pavilion was open with a note that all their catalogues were held up in customs; the Japanese reportedly finished in the wee hours late last week; the Canadians were reportedly seen wielding saws a mere 20 minutes before their opening; and lastly, there is some strange mirror clad building floating out behind the Canadian Pavilion that is still being constructed. Maybe they are hoping that with the mirrors no one will notice that the building really exists as it blends seamlessly with the canal/ lagoon water surrounds. 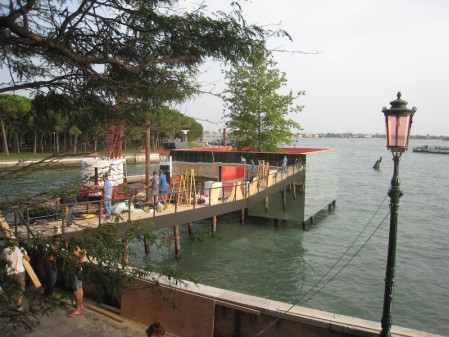 The ongoing construction of the mirrored building in the lagoon
Photography: Eric Holm

Now is the time to open the doors and welcome the Big Whigs, press or the super VIPs. Many are making the rounds; shaking hands handing out opening invitations. It’s the moment that determines who’s who in the world of exhibitions. Most pavilion curators don’t know each other yet they come bearing invitations only for the curators. If a worker so desired, they could simply say they are a curator and be given the golden ticket of party invitations. There was even supposed to be a boat for the right invitees to take them to Casa Malcontenta (a Palladian Villa) for a Zaha dinner. Among the other special parties out there are Robert Ivy’s (Editor in chief of Architectural Record) drinks near Accademia, both the American and Australian Pavilion’s parties on the rooftop terrace of the Peggy Guggenheim Museum located on the Grand Canal and Aaron Betsky’s birthday party. As for this blogger, I’m headed to a party for the Japanese Pavilion on a boat that plans to cruise around the lagoon. If you don’t hear from me again, I will be treading water off the vaporetto stop of Sant’ Elena.