Via Verde: a Game Changer in Urban Development

Designing for a community provides hope for the future. 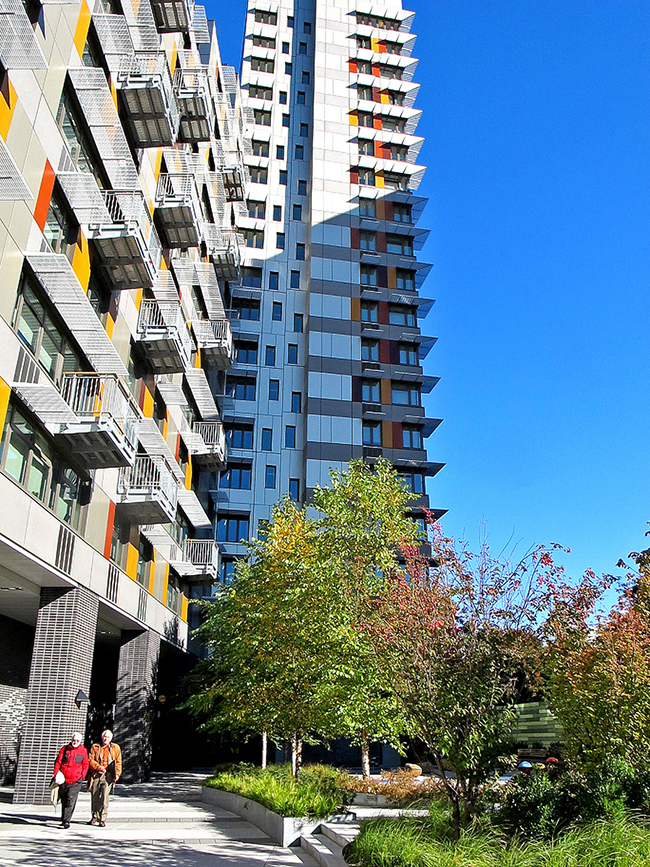 On the day I visit, I’m told that the ﬁrst crop of apples was picked in the Bronx this fall and delivered to residents at Via Verde. The orchard that produced this seasonal bounty grows on one of the green roofs set into this inspiring mixed-use, mixed-income housing complex that, among other things, is bringing hope to a neighborhood in the South Bronx that was once known for urban decay, crime, and despair.

I watch the 20th-ﬂoor community room ﬁll up, preparing for a panel discussion on how this exemplary project came to life, on the necessity for bringing together different specialists, all of them using their skills and connections. The panel embodies the familiar term “it takes a village” to get anything worthwhile done. In addition to the many accolades that it has already received in its young life, Via Verde is about to receive the 2013 Rudy Bruner Award. I look out from the generous corner windows to a neighborhood that sparkles in the October sunshine, watching the colors of autumn shimmer below while planes ﬂy overhead. But in this well-insulated room, we aren’t aware of the noise.

The man at the center of the celebration is Jonathan F.P. Rose, the developer behind Via Verde, and a Metropolis 2014 Game Changer. Rose is the ﬁrst to give credit to all his collaborators, including Phipps Houses, the not-for-proﬁt developers, owners, and managers of affordable housing in New York; the two design ﬁrms, Dattner Architects and Grimshaw Architects, responsible for a scheme that’s being studied around the world; the New York City chapter of the American Institute of Architects (AIA) and its efforts to engage its membership to give their creative all to affordable housing. (An invited competition held by the AIA and supported by the New York City Council, the New York Department of Housing Preservation and Development, and the New York State Energy Research and Development Authority, is largely responsible for launching this landmark project.)

Clearly the collaborators accomplished what they set out to do: “…pursue the development of a built housing prototype that draws inspiration…[as well as incorporates] issues of affordability, sustainability, transferability, and viability,” notes the New Housing New York Legacy Project website. That goal has been accomplished with ﬂair, elegance, and empathy. Everyone in the room agrees. One attendee calls Via Verde a “game changer.” Everyone has a glow that morning, from the banker who helped ﬁnance it, to the young neighborhood resident helping to cater the event. Such joy can come only from overcoming odds, accomplishing something of value, being part of a larger community. The memorable design has come to symbolize all their efforts; its enduring mark is certain to be felt for generations to come.