The trio, who worked together on the 2012 Serpentine Pavilion and 2008’s Bird’s Nest, have collaborated again—this time for an eerie installation exploring the menacing role surveillance plays in our urban lives.

If Jacques Herzog, Pierre de Meuron, and Ai Wei Wei had had their druthers, they would have taken a jackhammer to the thick brick walls of the Park Avenue Armory. The trio wasn’t contemplating some sort of radical reconstruction or act of protest. Nor were they enraged with the cultural institution—in fact, quite the contrary, as Herzog de Meuron has been cordially overseeing the Armory’s rehabilitation for the past few years.

The architects and artist had merely wanted to make the entrance to their latest installation, Hansel & Gretel, as seamless with the city as possible. As a compromise—one that no doubt greatly relieved the building’s administration—the collaborators instead chose an unobtrusive service door on Lexington Avenue, not the tall, imposing Park Avenue doors.

And so you enter Hansel and Gretel, normally enough. But the sense of normal very quickly dissipates. You traverse a long hallway that brings you closer and closer to utter darkness. As you wait for your eyes to adjust, faltering slowly up an inclined slope, you become aware of the low hum of drones somewhere overhead. Once the surroundings reveal themselves, you realize you’re in the Armory’s 55,000-square-foot Drill Hall. But the iconic trussed ceiling isn’t visible. You only see those buzzing drones circling above and, ahead of you, a sea of people curiously twirling about, or outstretching limbs, or crouching on the ground. 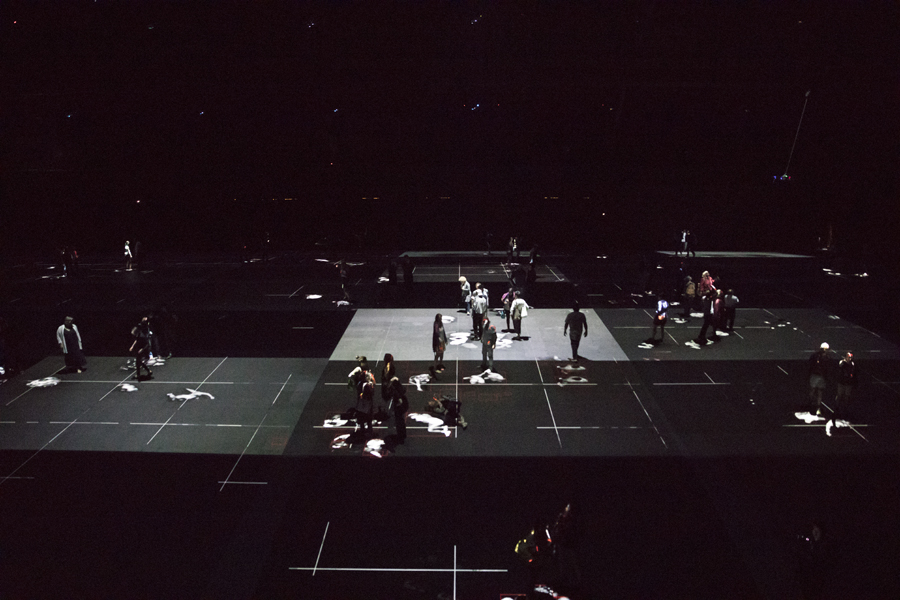 The experience of Hansel & Gretel is a purposeful sequence of spatial conditions, one designed to hammer home the extent to which so-called public space is monitored. And both he and his collaborators insist that it could only be done in this setting, in this city.

They aren’t part of the exhibition (although it’s hard to shake the feeling they could be), but rather your fellow exhibition goers. They’ve figured out the game you see—the drones above are finding them, targeting them in a red box of light, capturing their images, and projecting those images on the floor like ghostly imprints. It’s fun, insidiously so. You find yourself joining in, posing for pictures for an anonymous, all-seeing drone. As de Meuron explains, the exhibition is meant to provoke both “joy and fear.”

When the joy wanes, you wander through the massive space to the exit, where an usher explains that you will walk around the building, and up that main Park Avenue entrance into the head house, to experience part two. Entering into the harsh daylight feels anti-climactic, like that empty moment when you exit the movie theater. The magic is broken.

By the time you reach the exhibition’s second half, you realize the convoluted journey there was entirely the point. The moment you enter head house, a 19th-century space of oak woods and exceptionally tall ceilings, you’re confronted with a huge screen projecting a live stream of the Drill Hall, where you were just moments ago. To your left and right, screens on the wall show black-and-white images of faces captured. Tables designed by Herzog de Meuron carry iPads, which offer more opportunities to find your face among the images taken, or to survey those currently experiencing the Drill Hall. You have entered the monitoring hub, where the surveyed become the surveyors. The setting is terrifyingly civilized—like the banal pleasantness of the Stasi Headquarters in Berlin.

But while the placement of the exhibition is oh so purposeful (even the projected lines on the Drill Hall floors are in fact meant to echo the Manhattan grid), the power of this installation has little to do with its urban context. It is rather the experience itself, the juxtaposition of dark seduction and the chilling awareness of the extent of our surveilled lives, that makes Hansel & Gretel well worth a visit. And frankly, depressing though it may sound, it’s an experience that would hold just as much relevance in any city in our increasingly networked, sensed, data-mined world.

If you liked this, you may want to learn more about Herzog de Meuron’s transformation of the Park Avenue Armory. 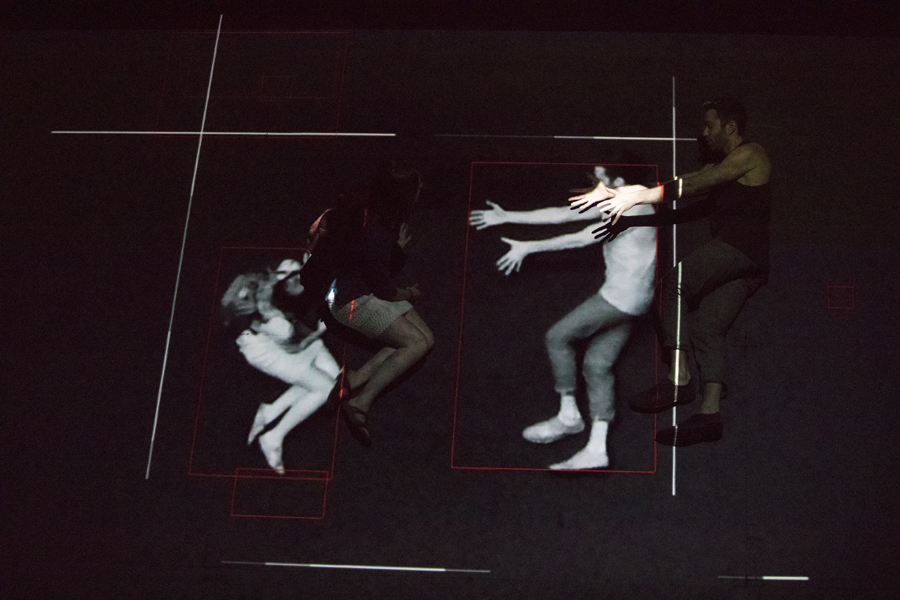 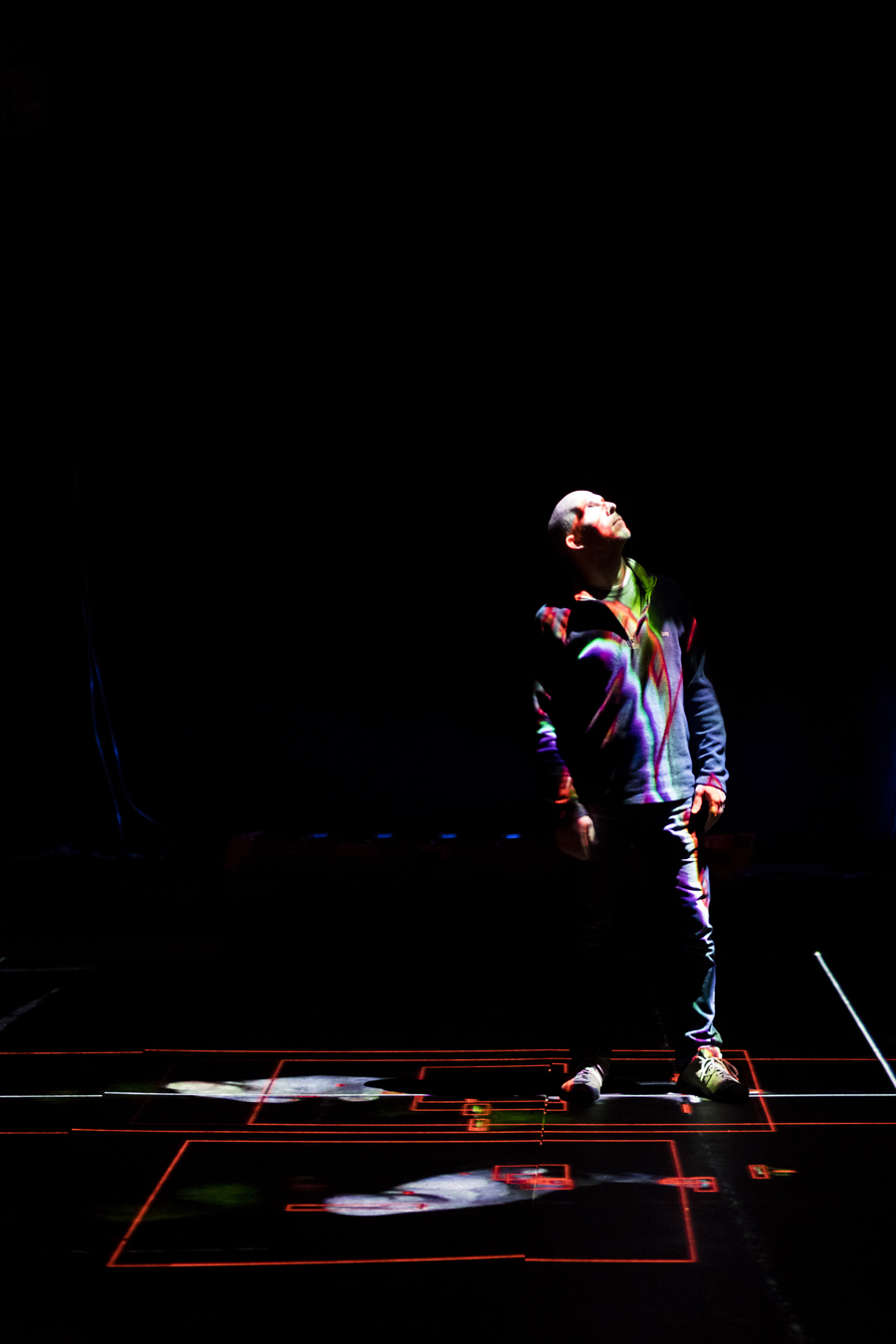