Baby, You Can Drive My Car

Five points on what we can expect from a driverless world

The future of driving is changing, rapidly. So declared John Eddy in his persuasive keynote presentation at last month’s “Designing a Driverless World: The Future is Now” panel. The event, which was co-sponsored by Urban Land Institute Minnesota and the Science Museum of Minnesota (SMM) in Saint Paul, and held at the latter, saw a lively discussion about driverless technology and how it might change the fabric of our cities. Eddy, a principal at Arup in San Francisco, led the proceedings—which also featured opening remarks from SMM president and director, Dr. Eric Jolly and Patrick Hamilton, respectively—with  a stirring talk, in which he diplomatically disabused his audience of any preconceived notions about what a driverless world might look like.

For Eddy, there isn’t a shortage of motivating reasons for building such a world. A lower accident/death rate, fewer if any traffic jams, and a less polluted environment are all obvious pluses. The talk highlighted how Google’s widely publicized prototype driverless cars have logged over six million miles, incurring only three accidents—one of which, Eddy noted, was the fault of a human driver. “Cars don’t hit people, people hit people,” he quipped. “So why not get out of the business of driving?”

The search-engine giant recently announced that it will begin testing a new fleet of driverless cars on public roads in Silicon Valley this summer. Meanwhile, Uber has hired 50 scientists from Carnegie Mellon University’s Robotics Institute and the National Robotics Engineering Center, with plans to build a new research facility near Carnegie Mellon’s Pittsburgh campus. Isolated from the watchful eyes of Silicon Valley competitors, the center will prototype and develop the technology for driverless transport.

All of which is to say, the geist is here. Germany is reserving part of the autobahn for testing driverless cars. And Ford CEO Mark Fields predicts driverless cars will be on American highways within five years. Eddy took issue with Field’s 2020 date, arguing that driverless cars will have entered the market by 2018. They’re availability to consumers, however, might be more limited.

That’s because “the minute a driverless car is available, Uber will snap them up,” Eddy wrote in a post-presentation email. “As will every taxi company, livery service, etc. because of the cost savings without the driver, as well as the ability to have a uniformly high-performing service, which is a problem today with human drivers at the helm.”

To clarify, there are notable differences between driverless cars and the more ubiquitous notion (and reality) of autonomous driving vehicles. The technology behind the latter typically includes adaptive cruise control, emergency braking, drowsy-driver technology, and blind-spot detection. In other words, the would-be navigator still sits in the driver’s seat of these cars, where they need only tap the wheel every so often and steer the broader strokes. (Rarely, if ever, do they have to touch the pedals.) In March, Elon Musk, chief executive of Tesla, announced plans for a new automated highway-driving system, called Autopilot, that would power its Model S sedans. Mercedes, Audi, Infiniti, Honda, and Chevrolet already have cars with autopilot capabilities for driving on major roads, and other manufacturers such as Volvo and Cadillac are in hot pursuit.

With driverless cars, on the other hand, there is no driver and no steering wheel. There’s just the passenger, the vehicle, and the road. 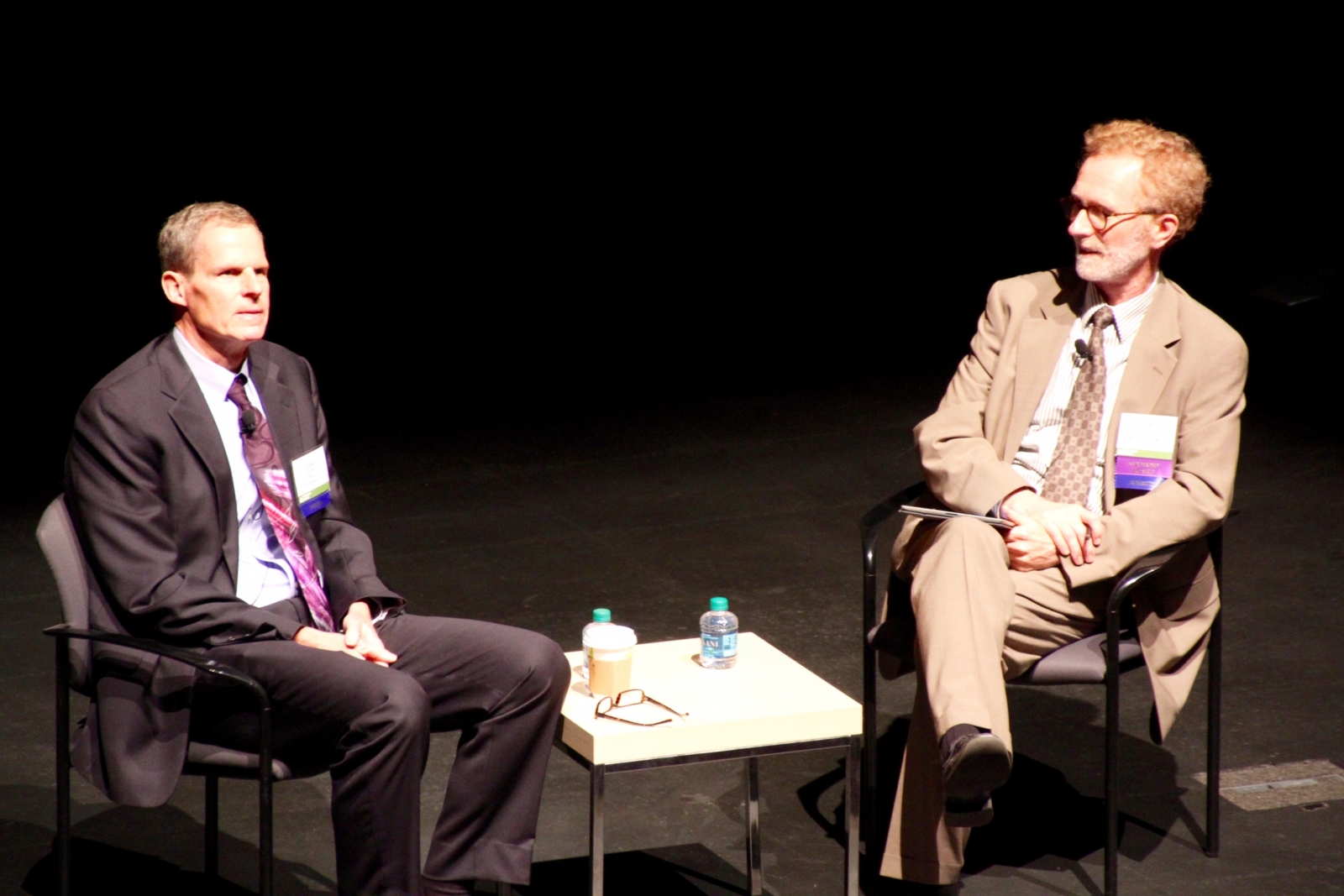 John Eddy (left) and Tom Fisher in discussion following the former’s presentation, “Designing a Driverless World: The Future is NOW!”

Eddy’s succinct talk raised many questions, some of which were addressed in a subsequent Q&A with Tom Fisher, the new director of the Metropolitan Design Center at the University of Minnesota, and the former professor and dean of the College of Design. “Driverless cars will bring the biggest disruption to the auto industry since its inception, as it goes from selling product to selling mobility services,” Fisher said. The effects will be disruptive, plain and simple, as the auto industry and its attendant enterprises are irrevocably reconfigured or changed completely. Or as Eddy more plainly put it across: “If you are an auto attorney or an auto insurance provider, look for another job.”

Driverless cars will affect everything from oil corporations to our cityscapes—including all those streets, concrete ramps, and asphalt surfaces—to car dealerships and auto mechanics. This can spell doom for companies unwilling to adapt, or those not doing so fast enough. (Eddy noted that it is much harder to modify an existing Prius or Lexus than develop a new autonomous vehicle.) And what about personal ownership of driverless cars? Eddy assured his audience that owning and maintaining a driverless car would exceed the financial reach of most, except for the very rich.

“I, for one, never expect nor want to own one, as many of the benefits for me that driverless offers are eroded if I’m the owner,” he said. “Cost savings due to higher utilization, doing away with purchased parking/garage, not responsible for upkeep, access to the latest driverless technology—these are all things I want, but can’t have if I own one.”

Other questions are unanswerable at present. Could driverless cars increase urban sprawl and will city streets be busier? Would the rise contribute to an increase in obesity, as Fisher suggested? How will driverless cars affect other transit systems like buses and light rail transit? Will teenagers—and adults—still have sex in cars?

Five Takeaways from “Designing a Driverless World: The Future is Now”