How do you convince 49,000 students, faculty, and staff at Indiana University (IU) to turn off lights and computers, to walk up stairs instead of taking the elevator, and to turn off the water a minute or two earlier in the shower? How do you convince an entire community to become more aware of their daily energy use and the importance of conservation?

It was the seventh time the IU Office of Sustainability has undertaken the task of hosting a multi-week Energy Challenge since 2008. But this year we did something new. In a nation-wide effort, we joined the second annual Campus Conservation Nationals (CCN) that sets out to achieve massive reductions in electricity and water consumption at colleges and universities. CCN was an undeniable success, reducing collective electricity consumption by 1,791,640 kWh (1.8 GWh).

Each Energy Challenge the IU Office of Sustainability hosts an Energy Challenge Parade to drum up support. Complete with a marching band, costumes, and banners, supporters stop outside a building while students are in between classes.

The three weeks in which IU participated in the CCN are now over, as are the weeks of IU’s own, internal Energy Challenges. We can breathe easy for a moment and take a break from our relentless marketing campaigns and meter reading trips. We can revel in seeing that every category in IU’s Energy Challenge—academic buildings, residence halls, apartment buildings, and Greek houses—have achieved reductions in both water and electricity use. This astonishes me and I am happy with the fruits of our labor. What now?

The Energy Challenge posters have been removed and stored away until next semester. No longer are students greeted with energy-saving tips as they attend classes or return to their residences. In fact, most students have left Bloomington for the summer, not to return until August, if at all. Are our moments of respite in between Challenges only preparing us to start from scratch in a few months time?

Lucky for us, humans are not so fickle. In the summer of 2011, after IU had already hosted five campus-wide Energy Challenges, our Office of Sustainability undertook an analysis of electricity and water consumption in all buildings that had participated in the Challenge, dating back to the first one in the spring of 2008. We looked at the savings during each month-long Challenge as well the trends during the months in between.

The results were astonishing. The five Energy Challenges themselves had saved over 2.57 GWh of electricity (no small feat), but the savings went far beyond this. In the 10 months of the year when there was no Challenge taking place, campus buildings reduced electricity use by over 6.86 GWh from 2008 and 2011! The students, faculty, and staff at IU had, knowingly or not, changed their consumption behavior.

In their 2010 book Switch: How to Change Things When Change Is Hard, Chip and Dan Heath lay out a fascinating groundwork for inciting change. Two concepts of theirs struck me as something we have been successful in achieving during our Energy Challenges:

First, we have “shrunk the change.” We do not ask participants to stop using coal power in a state where 96% of electricity is generated from coal or to stop emitting greenhouse gases altogether. Instead, we ask them to turn off their computer monitor when not in use or to use a desk lamp instead of an overhead light. It is easy to be skeptical of such seemingly small gestures. Yet, it has been proven time and again that this is how we can encourage individuals to generate large change. 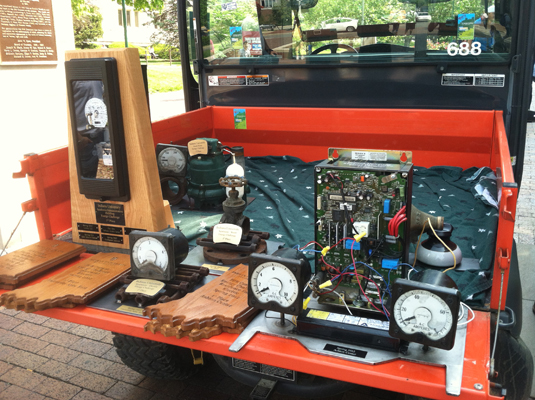 Energy Challenge winners receive traveling trophies fashioned out of scrap meters and other hardware found in the physical plant’s scrap metal pile. Winners also receive a wooden plaque made from storm-damaged trees to keep permanently in their buildings.

Second, it is not enough to show line graphs of projected rises in global temperature or to display charts depicting the average American’s resource consumption compared to the rest of the world. Instead of simply communicating the consequences of our actions, we must also promote a campus-wide identity, stating that we are the type of people who care about such things. This, of course, goes beyond the scope of the Energy Challenges themselves. But I am joyful that students now know what the IU Energy Challenge is without me explaining it to them. Our community now identifies with the Challenge as something important to them—even if only for the sake of winning a trophy.

And so for the time being, we may rest easy, knowing that we will continue to reap the benefits of our labor for the foreseeable future.  And we may be invigorated by the knowledge that our current and future efforts will bear fruit for much time to come.

Nolan Hendon is a Master of Public Affairs (MPA) and Master of Environmental Science (MSES) student at Indiana University’s School of Public and Environmental Affairs (SPEA) studying Energy and Sustainable Development. As the Utilities Conservation Intern with the IU Office of Sustainability, he was involved in the promotion and operation of IU’s Energy Challenge and IU’s participation in Campus Conservation Nationals (CCN).