Karim Rashid’s Garbo at 20: Does It Still Hold Up?

Karim Rashid’s iconic trashcan debuted 20 years ago. Does its message still hold up? 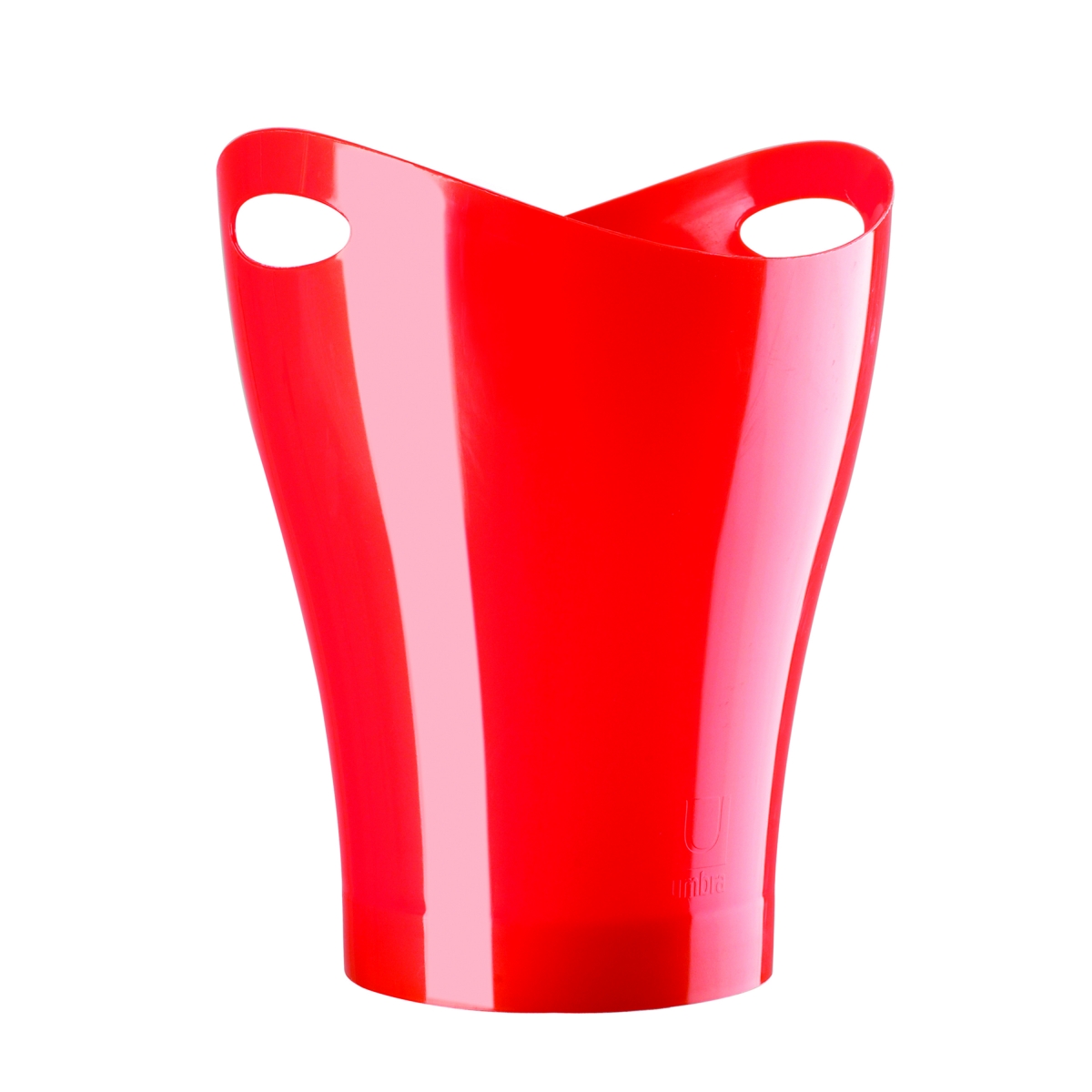 When it was released in 1996, the Garbo’s wanton form and glamorous pedigree (derived from the allusion to actress Greta Garbo) made waves for making trash sexy.

Chatting recently with an industrial designer friend about household objects, Umbra’s Garbo trashcan came up. The wastebasket, along with its miniature sister the Garbino, is in its 20th year of production. With more than seven million sold, the curvy plastic receptacle made trashcans sexy and established Karim Rashid, the Garbo’s designer, as a fresh and adventurous voice in household products. My friend, let’s call him Aldo, said he didn’t get it. The shape, the curvature, the high-intensity color palette, all for him made the can into an ostentatious object that imposed itself on spaces rather than accommodating them. “Besides,” he went on, “what does it tell me about the world? What is it about?”

Surely there must be something about this thing, I thought, that has made it into a ubiquitous, brandless classic, on par with those orange-handled scissors (by Fiskars) and that insulated flask (by Thermos). As far as trashcans go, it works, just as it brings contour and color to interiors that, by and large, lack variety in those departments. And yet, with so many sold, and its status as a design icon assured by inclusion in the Museum of Modern Art’s permanent collection, the can clearly captured something of the zeitgeist.

The ubiquity of Garbo prompts scrutiny. As Aldo seemed to question, does the design’s commercial success imply that it has attained that proverbial holy grail of good design? Or, to push back, do things need to be “about” anything? Can’t they just work well, deliver beauty, and employ fabrication techniques that are gentle on resources? Why task objects with the imperative to comment, to reveal something, to talk? If all the things spoke, our thing-filled worlds would turn loud and cacophonous. To stand in awe and commune with a chair, or to contemplate the questions posed by a hammer, is in many ways antithetical to things. A thing, after all, wants to be used, and for that, it should probably shut up.

Of course, the Garbo does speak, at least to Rashid. In a 2008 Los Angeles Times profile of the Garbo, the designer cooed about how the celebrated can invokes the glamour, elegance, and curves of its Hollywood icon namesake. With the Garbo being “seductively round, [and] wider at the top than at the bottom,” and having a “wide, beautiful, inviting mouth to gracefully accept waste,” disposal almost becomes an erotic act. The handle cutouts, positioned above the lower edge of the bin, ensure that “a person lifting this basket, even when it’s full, would never come in contact with its contents.”

The Garbo is every bit a product of this world; it just seems to be oblivious to it.

A beautiful and complex romance it may be, but the question—of what, if anything, is the Garbo about—lingers. In a 1998 story about the can, Rashid boasted of the Garbo’s multiple uses, from umbrella stand and vase to champagne bucket. It is also worth noting that almost no publicity photos show the trashcan in an interior setting or even anywhere near trash; instead, it seems to exist mostly on seamless white backgrounds—an ideal form floating in a pristine virtual space. It might promise to rescue our interiors from drab convention, but the can appears to lack any genuine engagement with our world. The Garbo is, apparently, squeamish about its own essence: waste.

On this topic, the can, indeed, “never come[s] in contact with its contents.” The Garbo and Garbino are products of the 1990s, when the popular perception of waste and its ecological impact was still a bit abstract, if not naive (environment=good, trash=bad). Back then, the harsh reality and implications of global warming still hadn’t quite reached critical mass; municipality-scale recycling efforts remained nascent and unevenly distributed, while corporate environmental policies were just coming into vogue (the boardroom hippies at Apple announced their first environmental policy in 1990). Viewed within this context, the Garbo and its fabulous disappearance of trash into a generous, feminine form may be tolerated as an unfortunate relic from the environmentally drowsy ’90s.

From today’s post–Inconvenient Truth vantage point, however, with the Pope calling for a thorough reckoning of our relationship to the planet, and the leader of the free world rejecting a trans-continental oil pipeline, Rashid’s “sexy trash” shtick seems cringeworthy, garish even. In early design meetings, the designer proposed that the can be translucent, passing diffused light through its torso. Umbra, which manufactures the Garbo, thought the idea too radical: “Who wants to see their own trash?” co-founder Paul Rowan remembers being asked. Garbage is indeed unsightly, but as its global volume grows, getting it out of view becomes evermore cumbersome. In 2013, China announced that it would no longer buy American trash, citing the low quality of our sorting. In the meantime, the international carbon-offsets market—essentially a planetary “trashcan” for emissions established in 1997 (around the same time the Garbo was hitting stores)—increasingly looks to be a failure, run amok by the machinations of swindlers and speculators. Whether we think of trash as refuse or chemical byproduct, the issue is dire, not only because the volume is so immense but because our strategies still seem to favor hiding our waste, whether in esoteric carbon-counting mechanisms, developing countries, or curvaceous canisters. Perhaps to really look at garbage is precisely what we need.

It’s a product of the 1990s, when the popular perception of waste and its ecological impact was still a bit abstract.

And so, the Garbo—an injection-molded piece of polypropylene—appears to lack self-reflection. Responding to consumers’ concerns about Umbra’s heavy use of plastics, the company experimented with a host of biodegradable, vegetable-based plastic substitutes, as well as additives to standard plastics that dramatically speed up the degradation process should the material end up in a landfill (likely, since only 9 percent of plastics were recycled in 2012). Is it possible that the Garbo has something to say about our messy world after all? Rowan clarifies over email: “Umbra has launched various sustainable initiatives—one being bio-degradable—however soon after, this was withdrawn due to opposing opinions on the effectiveness of the additive.” These days, he says, only the black can is made from recycled material; “other colors are virgin polypropylene.”

The Garbo, then, remains pure, unsoiled by our trashy world, but it also becomes suddenly complex and curious: a trashcan that’s uninterested in trash, conflicted, in an existential vacuum. How can a thing so seemingly aloof from its essence attain such acclaimed status? As an emblem of good design, the Garbo feels hollow, or at least compromised. Another design classic, Braun’s Sixtant Electric Shaver brought few technical innovations to the market in the 1960s, but, like the Garbo, sold millions of units. Its success can certainly be attributed to form (sleek, black, and to the point), implying a sterile intimacy, with shaving imagined less as a moment of personal grooming and care, and more like something to be done quickly and efficiently for the sake of an employer. Still, when the first model of the Sixtant debuted in 1962—the year the United States sent John Glenn into orbit around Earth—the face shaver made palpable commentary about modern men and their role in society. A 20th-century man, the Sixtant seemed to say, was a technologically dependent subject in service to the institution.

Of course, like the Braun shaver, the Garbo is every bit a product of this world; it just seems to be oblivious to it. “The face of Garbo is an Idea,” wrote the cultural critic Roland Barthes, reflecting on Greta Garbo’s countenance. For Barthes, the perfect essence embodied in her visage completely transcended Garbo’s physiognomy, and even her persona, all without reference to “any reality except that of its perfection.” The Garbo is after something similar, imagined from the start less as an object of utility and more as a rarefied icon. Certainly it functions, in several different capacities even, but this is incidental. What the Garbo ultimately stands for, in fact its entire reason for being, is its own perfect form, expressed within a singular iconography. If, as Barthes famously wrote elsewhere, a truly transcendent art seeks the “exhaustion of content by form,” Rashid’s can leaves us to parse trash and meaning. The Garbo, after all, is not a thing. It’s an idea.