Toll booths, traffic cones, and other Los Angeles’s urban detritus provided the material basis for architects Laurel Broughton and Andrew Kovacs’s 2014 Gallery Attachment installation. The folly explored the architectural potential of quotidian objects—or, as Kovacs prefers, “the debris of modern civilization”—through their “re-composition and de-saturation,” painting them entirely white and assembling them into various monochrome towers in a Chinatown parking lot.

The collaboration lives on at the historic Bradbury Building’s Gallery All, the site of the USC School of Architecture-sponsored Errors, Estrangement, Messes and Fictions exhibition. White dollhouse-sized trinkets representing the Gallery Attachment project feature alongside examples of Broughton and Kovacs’s individual works and those of L.A. studio First Office, co-founded by Anna Neimark and Andrew Atwood.

Under the paradoxical heading “early career retrospective,” the decidedly uncurated show (the exhibits were chosen by the architects themselves, then displayed seemingly haphazardly on one expansive carpeted table at the center of the gallery) explores the theme of early influences in a young architect’s career, which inevitably includes the work of peers and friends.

Elsewhere on the elevated carpet, Broughton and Kovacs’s divergent practices retain an apparent fascination with the architectural qualities inherent in the mundane. Broughton’s “Legs” project imagines two skyscrapers as a pair of male and female mannequin calves on which the patterns of their clothing—checkered trousers for him, fishnet stockings for her—provide the fenestration.

A scale model that Kovacs designed as a master plan in miniature for a high-minded Los Angeles dog park is an assemblage of his collection of small objects: plastic palm trees for kitschy ambiance, yellow toy fire hydrants arranged into a grid that evokes Chris Burden’s 2008 “Urban Light,” and archways of tiny tires that provide an obstacle course for small dogs. (There were also grass ziggurats, a pool modeled after that of Philip Johnson’s New Canaan estate, and a hilly terrain inspired by the landscapes of Roberto Burle Marx. Consider the proposal’s rejection a real loss for the dogs of L.A.)

Interspersed throughout are white scale models of Neimark and Atwood’s collaborative projects, both built, as in the Suprematism-referencing Four Houses of Pinterest’s San Francisco HQ, and theoretical, as in Zoopol, an animal city of buildings that protrude zebra stripes and giraffe spots.

Three of the architects featured taught architecture together at USC (Kovacs began collaborating with Broughton after he started teaching at UCLA in 2012) before splitting off to other local institutions, and so the show as a whole serves as a kind of reunion, says USC director of undergraduate programs Hadrian Predock, who organized the show.

“I thought ‘early career retrospective’ was an appropriate oxymoron and curatorial strategy,” Predock explains. “I don’t place so much weight on ‘retrospective’ as having to reflect a lifetime of work. It really just means to look back on a particular period in time,” whether that point was 30 years ago, or in this case, three. 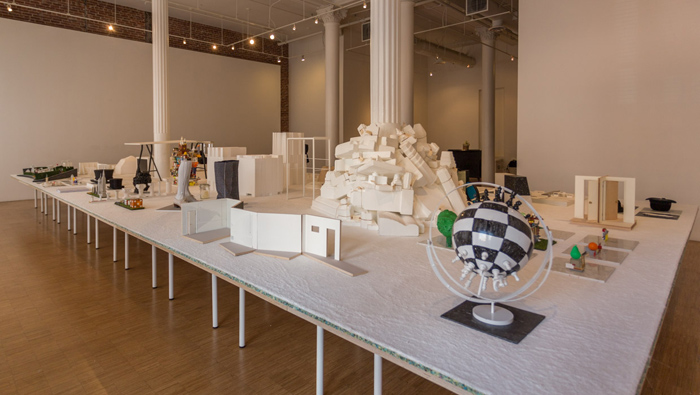 The works on show were conceived in the last few years and are thematically linked by a playful handling of scale, an emphasis on fictional scenarios, and an affinity for the color white. 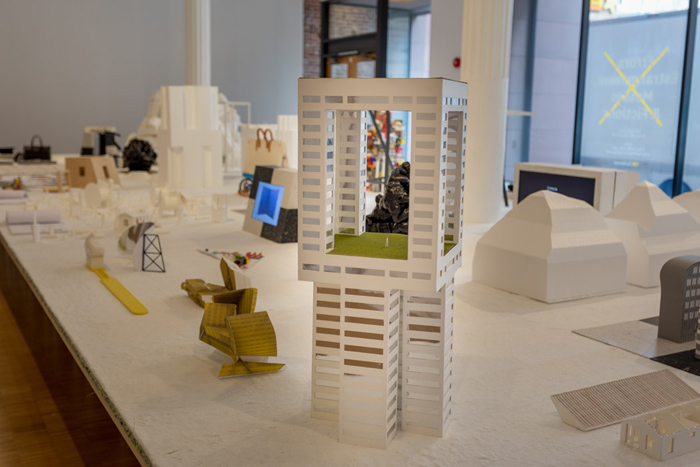 Kovacs’s proposal for a tower involved a method of collaging that he has documented on his wildly popular microblogging site, Archive of Affinities. 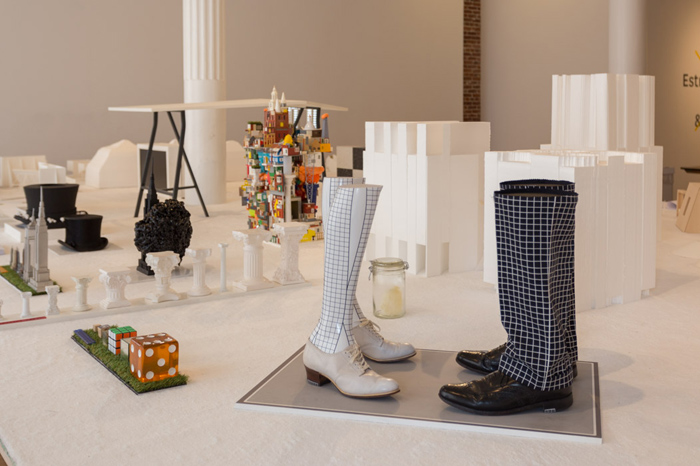 Broughton’s “Legs” project imagines two skyscrapers as a pair of male and female mannequin calves on which the patterns of their clothing provide the fenestration. A lecturer at the USC School of Architecture, Broughton runs a design studio, Welcome Projects, known for its collection of cartoonish handbags and accessories. 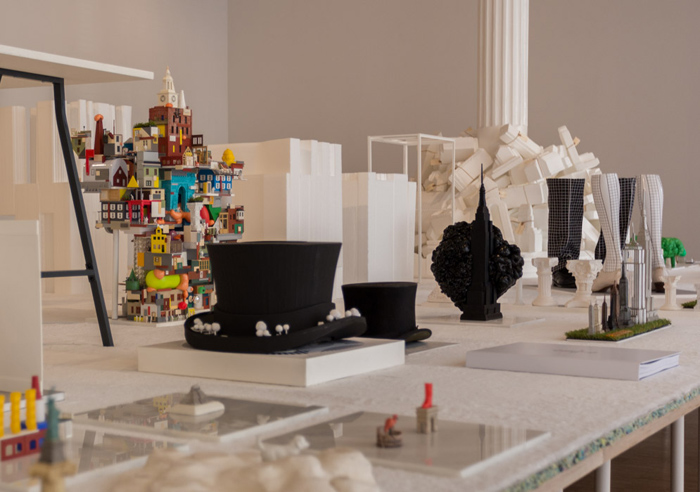 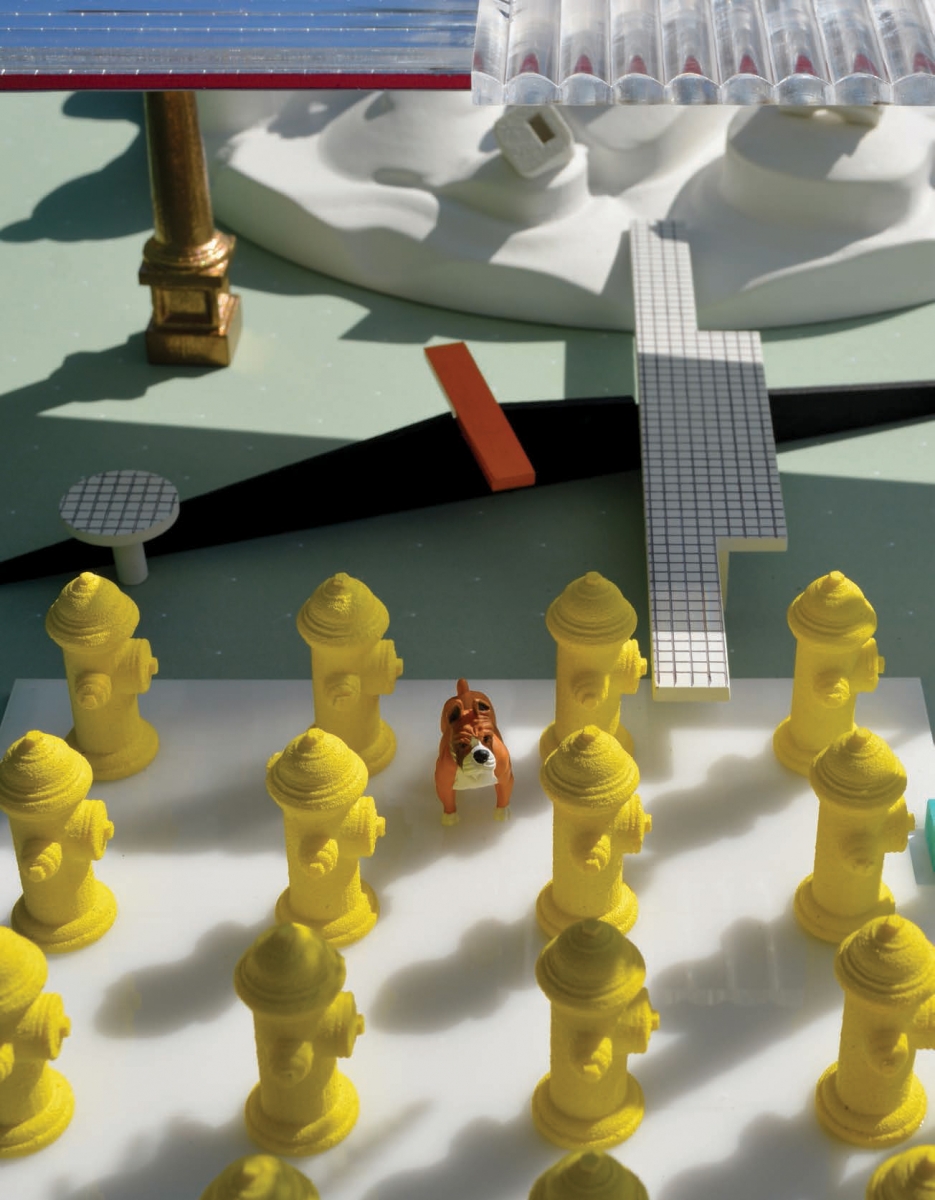 A proposal for a dog park, by Kovacs, is included in the show. The park’s design incorporates elements from the last century of “paper architecture.”