New Retrospective Glimpses the Man Behind the Maison de Verre

With the help of VR and other technology, the Jewish Museum’s ambitious exhibition on Pierre Chareau reveals a splendidly idiosyncratic life and work.

Rendering highlighting exhibited sofa and chairs, designed by Pierre Chareau, in the virtual reality context of the grand salon of the Maison de Verre.

Pierre Chareau was an architect whose buildings have almost all been demolished; an interior designer whose designs have all been remodeled; and a film set designer whose films you cannot see. These are not the most auspicious circumstances on which to mount a retrospective, but an ongoing exhibition at the Jewish Museum, imaginatively designed by Diller Scofidio + Renfro (DS+R), attempts it nonetheless.

Chareau, who is best known for his one surviving building, the Maison de Verre in Paris, defies neat classification. Without any sort of architectural training, he worked briefly as a furniture designer for a British firm then struck out on his own, creating an idiosyncratic corpus of furniture, interior designs for life and cinema, and even several homes.

He emerged amidst many different rising aesthetic channels—from which he borrowed and emulated—without ever belonging to any. As exhibition curator Esther da Costa Meyer notes in a catalogue essay, Chareau had “an unparalleled ability to hold seemingly incompatible uses in tension: rare woods, prohibitively expensive and polished to enamel-like surfaces, juxtaposed without transition to rough-hammered components in wrought iron.” In a single piece, opulent fabrics could sit next to machine-age metals; in a room, plush sofas could be paired with harsh tables. He melded products of the factory and the artisan as if they were natural, or at the very least, unavoidable companions. Da Costa Meyer characterizes his work as a “confrontation with the very discontinuities of an era in which craft was giving way to assembly-line production,” and it often gleefully denies the contradiction.

His pluralist ethos unfolded quickly over a condensed time frame—only about 13 years—in a career curtailed twice, first by the 1929 worldwide economic crash that robbed Chareau of most of his clients, then by the imminent Second World War that robbed him of his Parisian home. As a Sephardic Jew, Chareau, with his wife Dollie, fled Paris ahead of the German invasion and set out for New York. They brought portions of their estimable art collection, often selling pieces to sustain their new life in America. Pierre Chareau: Modern Architecture and Design, the first U.S. exhibit on the designer, reassembles some of that collection, along with a variety of furniture pieces, many of them on loan from the Centre Pompidou.

The Maison de Verre notwithstanding, Chareau’s design legacy lives on in his furniture pieces, of which a fair number survive and are well-represented at the Jewish Museum. While individually arresting, these pieces, ranging from velour sofas to amaranth and iron desks to alabaster lamps, are inadequate in their isolation; they do not make for a full reading of a man whose professional title was “ensemblier”—a term more euphonious and inclusive than “interior designer.” Chareau did not seek to merely fill space but to shape entire environments. Architect Liz Diller, remarking on the exhibition design, underscored this facet of Chareau’s designs: When removed from their original configurations, the pieces “lose their relationship to space, to architecture, to function.” They become, Diller added,“truly orphaned.”

It’s illuminating to see a large collection of Chareau’s work assembled physically in one place, an experience otherwise impossible outside of the Maison de Verre.

In order to avoid this displacement, the designers looked to the period rooms at the Met, which for Diller can “transport museum visitors in time and space.” These, however, would be practically impossible to replicate in the small galleries at the Jewish Museum, and so DS+R’s expedient was virtual-reality headsets—not to supplant but to accentuate reality. Chareau’s furniture pieces are arranged in four clusters in an inner gallery, which turn into immersive panoramas once the visitor dons a headset. These recreate the garden and a room at the Maison de Verre. The effect, like most virtual reality, is mesmerizing if not exactly transporting—more akin to stepping into one of the gaudy pochoir or gouache prints of Chareau’s ensembles than into the actual rooms themselves. Still, the approach succeeds in providing a sense of just how uniquely Chareau arranged domestic life.

The interior of the adjacent gallery features Chareau’s furniture, which doesn’t require VR embellishment to impress. These pieces are prodigiously varied, sometimes elementarily stark, sometimes unapologetically sumptuous. They’re also occasionally confusing. (Diller: “Chareau was always a hero of mine when I was in school—I could never quite figure him out.”) There are Art Deco elements, vague Japanese influences, traces of Chippendale—you could name hundreds of influences without ever quite summing up his catalogue. Da Costa Meyer notes Chareau’s masterful touch both working with and combining “exotic woods such as amaranth, ebony, rosewood and Macassar.” He was more than happy to fell both rare forests and rare beasts in his designs—ivory and sharkskin crop up, but metals are also legion.

“Kinetic” is a term often applied to Chareau’s furniture: some move and many look as if they’d like to. He had no interest in segregating programmatic functions. For instance, he would hitch a phonograph to a desk like a sidecar, attach swiveling tables to bookcases and sofas, even add adjustable leaves to a smoking table. Nothing was too small for Chareau’s meticulous design attentions, as these and other examples in the exhibit show. Letter holders, ashtrays, a fruit display stand—all these everyday items fell within his purview. His lighting pieces are especially remarkable. Most, in fact, forsake lampshades altogether for sculptural alabaster arrangements that diffuse light.

But on to the Maison de Verre, here innovatively represented beyond the typical tired triangulation of photos and models. One room features a map of the house’s lower level on the floor, and a moving double-sided screen above. The screen moves back and forth over the map, displaying the vertical dimensions of whatever portion of the house it’s over, with rooms outlined and colorized to attract attention.

Projections on other walls feature actors navigating through and using these highlighted rooms in very practical ways. It’s somewhat like Peter Greenaway’s installation art (complete with some near-nudity), producing a very welcome and almost hypnotic sense of how this odd building works.

One real merit of the video installation is how it furnishes a clear sense of the constrained process of movement within the building. You enter as a guest would via a series of right-angle turns, then up through the house to the second-floor grand salon. Other rooms lurk semi-concealed in plain sight. Expectations of modern austerity, which the house’s famous frosty glass-brick facade suggests, are undone as the camera moves through that brick to reveal a decadent interior. It’s very strange and tremendously appealing. Kenneth Frampton wrote in an essay on the home that its “discordances in style and scale have a surrealist feel to them,” an impression certainly accentuated by the strange modern technologies deployed here to see them.

(It’s no surprise that Chareau worked as a set designer on a number of films, principally with avant-garde director Marcel L’Herbier, work represented here by stills and design sketches. L’Inhumaine, which also utilized Robert Mallet-Stevens as a set designer, recently became available on Blu-Ray in the US and is worth seeking out.)

Otherwise excellent, the actual exhibit does somewhat neglect Chareau’s singular work in a forgotten nook of design: ceilings. Chareau’s own are carved, layered, angled, and relentlessly manipulated to echo, emphasize, or contrast with, the volumes of rooms beneath. It’s difficult to think of a designer who’s provided more imaginative reasons to look up (happily the exhibit’s catalogue provides numerous examples of this work).

It’s exceptionally illuminating, not to say magical, to see a large collection of Chareau’s work assembled physically in one place, an experience otherwise impossible outside of the Maison de Verre. This would be an accomplishment even if the only curatorial intervention had been opening packing crates, but it’s especially gripping to see Diller Scofidio + Renfro’s efforts to provide simulacra of original arrangements. What emerges from these experiences is a sense of Chareau’s talents, talents which—much like his unusual, unexpectedly harmonious designs—are more than the sum of their parts.

Pierre Chareau: Modern Architecture and Design at the Jewish Museum in New York is now open through March 26. 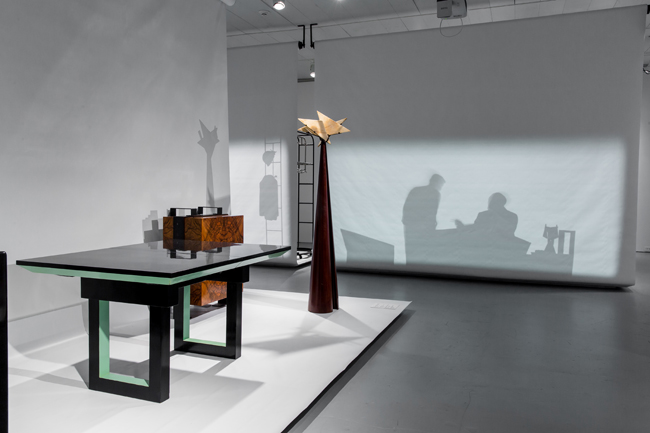 An installation view of the exhibition Pierre Chareau: Modern Architecture and Design. The exhibition design was executed by Diller Scofidio + Renfro. 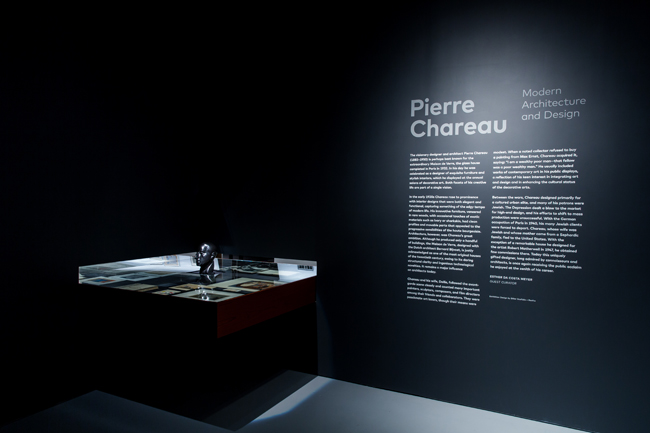 Chareau is largely remembered for his Maison de Verre in Paris, but his legacy also rests on a series of splendidly diverse furniture designs. 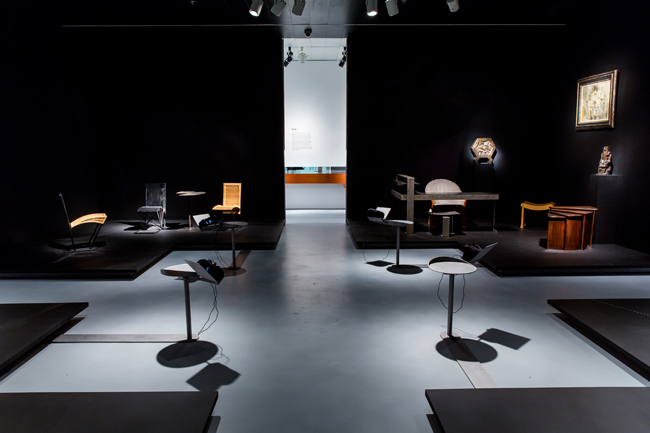 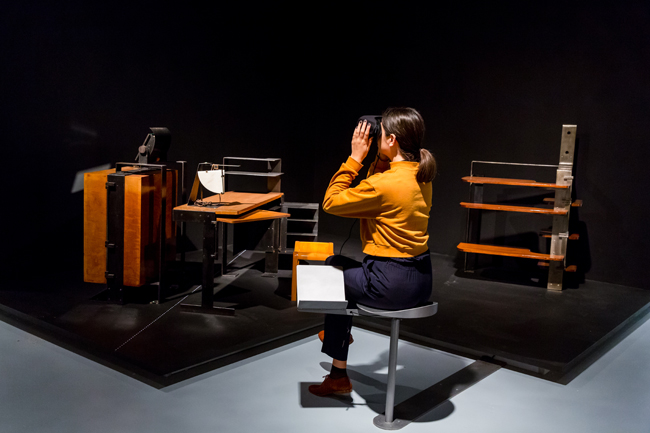 DS+R’s exhibition design employs VR to put the visitor inside the eclectic rooms Chareau designed to show off his furniture pieces. 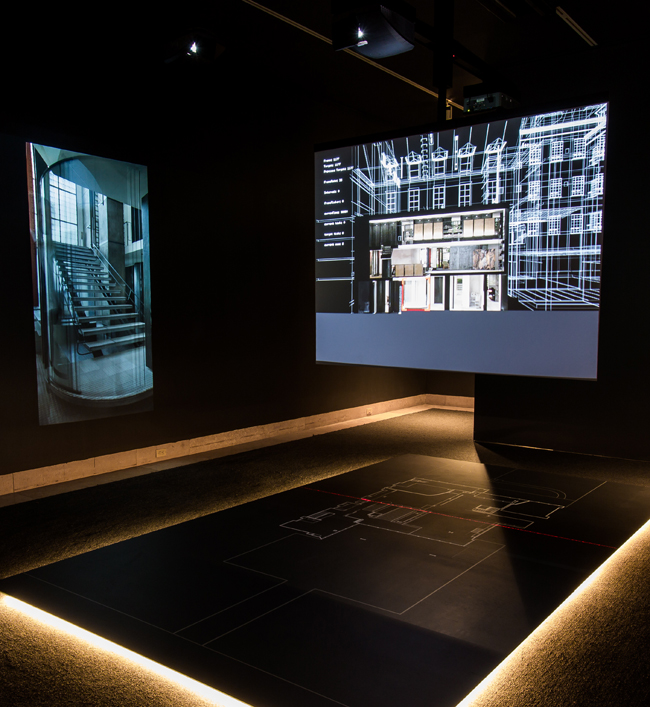 When it comes to the Maison de Verre, the show uses video and scanning technologies to bring the famous—and famously difficult-to-visit—house to life. 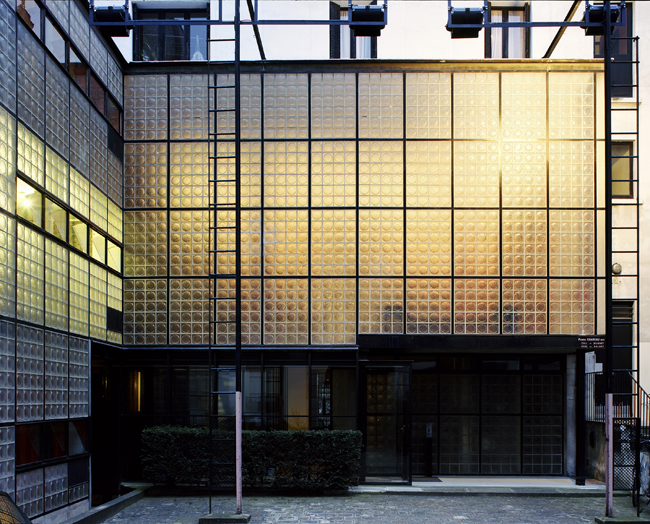 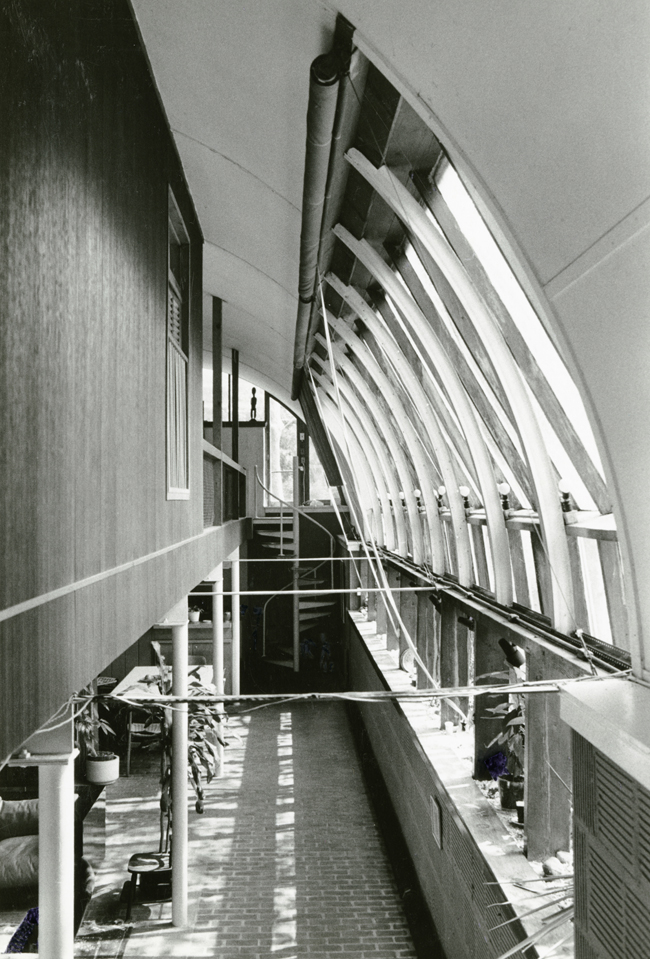 The second-floor balcony of the house that Pierre Chareau designed for Robert Motherwell in East Hampton, New York, 1947. 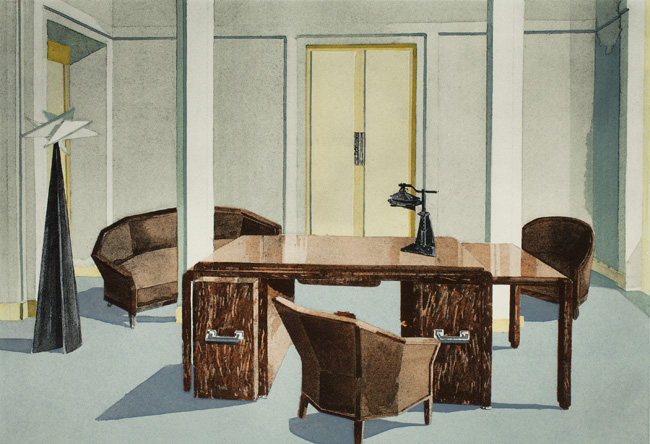 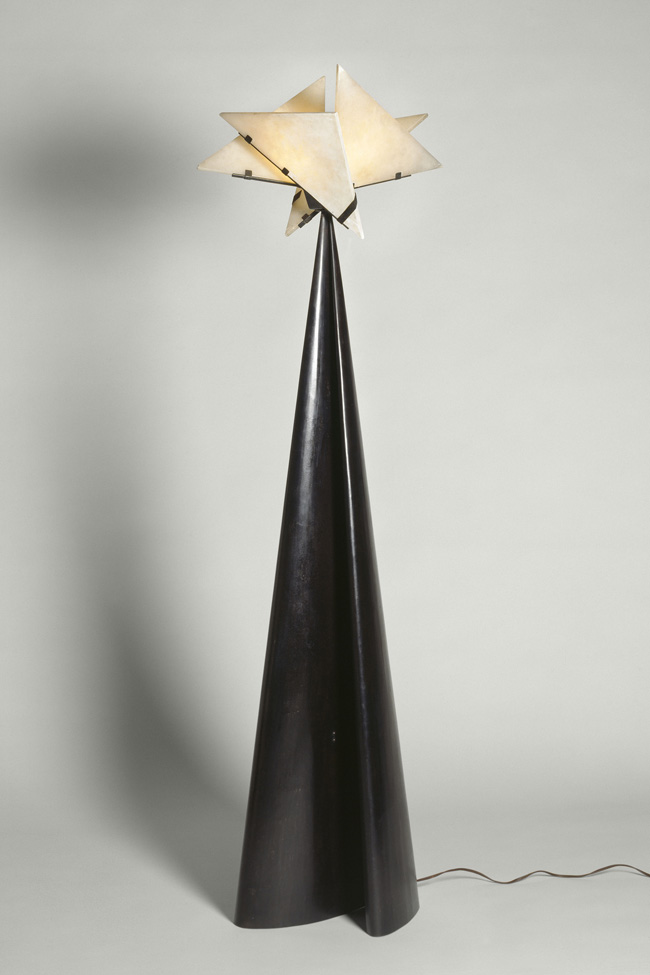 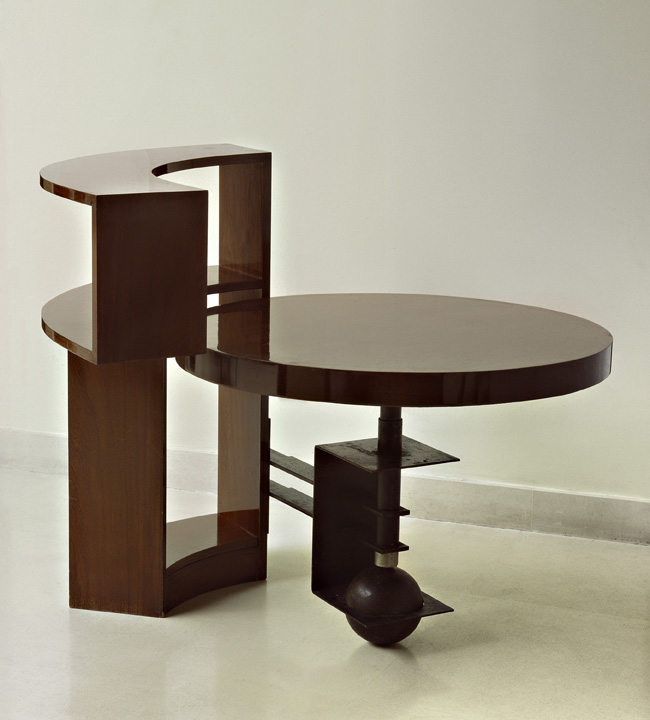