At the Guggenheim, On Kawara Fills Wright’s Rotunda with Silence

“On Kawara—Silence” presents a rare—possibly final—chance to see so many of the artist’s paintings in one place.

Paintings from On Kawara’s “Today” series

Would On Kawara have immortalized the date that his posthumous exhibition opened at the Guggenheim? After all, the famously reclusive artist would likely have declined to attend the show’s preview and reception despite residing in New York. Yet, surely his practiced hand would not have betrayed the significance of the date, whose letterforms and numerals he would have inscribed in a close approximation of Gill Sans or Futura on a flat field of hand-mixed pigment.

Regardless, the day will soon assume the anonymity of the others in Kawara’s celebrated “Today” series of paintings. Long a touchstone of conceptual art, the series came into being on January 4, 1966; the Japanese-born artist continued producing the paintings until his death last summer. The premise of an artwork that bears only its date of production is simple enough, but it’s hardly a case of “once you’ve seen one, you’ve seen them all.” On the contrary, On Kawara—Silence presents a rare—possibly final—chance to see so many of the paintings in one place.

Even so, curator Jeffrey Weiss insists that this impressive survey of some five decades of practice is not a retrospective; Kawara’s open-ended exploration of time is at once more ambitious and more granular than the designation allows. Islands in time though they may be, the canvases are complemented by the newspaper from the memorialized day in question, the latter assuming the dimensions of a folded broadsheet. Both are preciously packaged in cardboard boxes that add a time-capsule element to the proceedings. (These accompaniments, on view at the Guggenheim, are not always exhibited alongside the paintings, lest the prolix printed matter detract from the laconic purity of the otherwise unmoored paintings.)

If the “Today” series represents the open-endedness of an ellipsis as opposed to a full stop—the fact that 150 of them are on view sounds impressive until you learn that there are nearly 3,000 of them in total—the peripatetic artist also produced a number of self-contained yet invariably deterministic series. As far as conceptual art goes, Kawara’s work has a certain repetition-based brand of cross-disciplinary appeal. Beyond the impeccable hand-lettering, graphic designers might also be interested in the “I Am Still Alive” series of telegrams, in which Kawara’s gnomic missive is somehow incidental to each of the broadly geo-specific documents (note the mid-century Western Union logo). Similarly, the postcards that comprise Kawara’s “I Got Up” series bear only a timestamp of when the artist awoke and a postmark, but offer a deconstructed flipbook worth of architectural vignettes on their obverse. Neatly arrayed in circumnavigable panes, the cards disclose visual evidence of the other end of the dialogue, at least geographically. Slight variations suggest that Kawara bought them in bulk, while the presentation here evokes a storyboarded grid of architectural marvels—the UN headquarters is among Kawara’s favored protagonists—and wider cityscapes alike.

But these serendipitous associations are what might be called “data exhaust” today, merely the observable symptoms of Kawara’s chronic obsession. In “100 Million Years,” the rank of concrete-colored binders reads more like a Judd-esque sculpture than a row of filing-room fixtures, a readymade with hundreds upon thousands of layers of content but only surfeit as its meaning (the pages within are printed with the titular number of years, typewritten by Kawara). Conversely, a pre-printed, poster-sized 100-year calendar serves as a kind of registry for the “Today” paintings, annotated with pips to indicate those days in which he spent up to seven hours completing them.

As in a crime of omission, we can only wonder as to what externalities might have distracted Kawara from fulfilling his duty on the days not represented.

More telling, perhaps, is the title of the exhibition. Like a misplaced “@” sign trailing the austere mononym Silence, the spiral “logo” comes across as a blunt metaphor for time, but germane as a subtle allusion to Wright’s space. Insofar as the intermittent “Today” paintings transform Wright’s masterpiece into a three-dimensional (albeit impractical) calendar, the spiral illustrates a characteristically plainspoken suggestion that the continuous ramp embodies the concept that time can be both linear and cyclical, even as it flattens the space into a single, ever-inclined path. (The uppermost ramp winds back the clock with paintings from each year, from 2014 back to 1966, an unusual gesture contra the narrative not only of the exhibition but of the architecture itself—a slight misstep from Weiss.)

In this sense, Kawara, who was involved in the planning of the show, is more amenable to Wright’s original vision than other artists who have intervened throughout the building’s storied history. Thomas Messer, Museum Director from 1961–1988, famously likened Wright’s design to the “the circular geography of hell” (dramatically reinterpreted in Matthew Barney’s conquest of the atrium in Cremaster 3), but recent interlopers have subverted the antagonism of the abyss by filling it—perhaps to the chagrin of the architect, who intended for it to remain devoid of art.

Nevertheless, Wright would have appreciated the apotheosis of this instinct, in 2013, when James Turrell transformed the rotunda into a concentric, ombré-suffused oculus in the site-specific installation “Aten Reign.” The blockbuster exhibition simultaneously revealed and concealed the skylight—restored to Wright’s original conceit, by Grimshaw Architects, in 1992—as though the virtual vertex of the inverted cone had been turned inside-out. 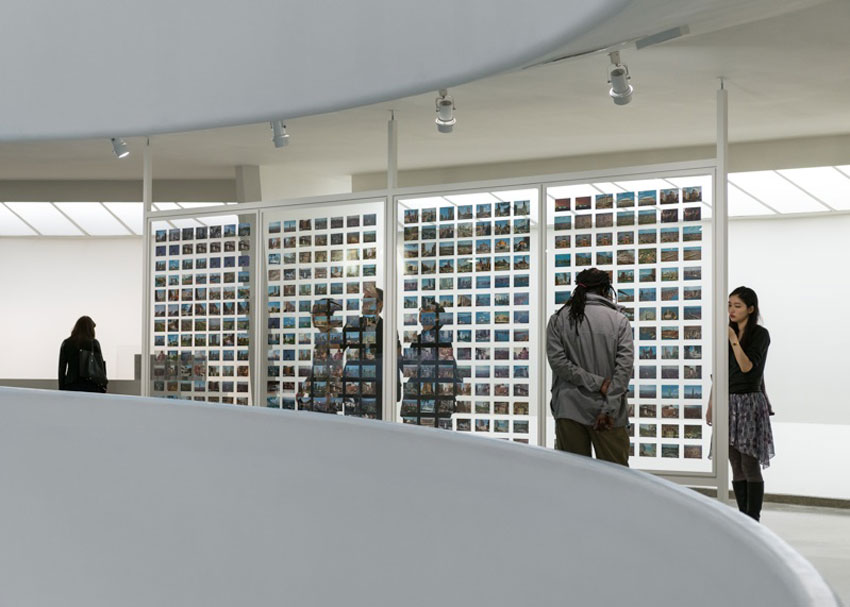 The “I Got Up” postcards on display at the Guggenheim

So too does Kawara honor Wright’s sacred architecture, the homage further removed by a degree in the dimension of time as opposed to space. Indeed, Weiss relates that Kawara had long dreamed of exhibiting the “Today” series along the prescriptive plan of Wright’s Guggenheim, its roundabout seriality a mute rejection of the modernist rectilinearity as the conventional container not only for art but people as well.

The content of the paintings, in turn, is unimpeachable, artless—at once transparent and opaque, to paraphrase Weiss’s remarks—to the effect that Kawara’s reliance on natural language is immaterial. Rather, the dated paintings (another unavoidable pun) endure as evidence of ritual, the series, a testament to self-discipline even as it transcends both the human hand and our ineluctable condition. As in a crime of omission, we can only wonder as to what externalities might have distracted Kawara from fulfilling his duty on the days not represented, since he destroyed canvases that had not been completed intra diem.

If the fact that On Kawara—Silence opened just six months after Kawara died is coincidentally yet eerily symmetrical with the Guggenheim’s opening six month’s after Wright’s death in 1959, it’s also worth noting that the “Today” series falls short of its silver jubilee. The work defies the half-century mark as an easy byword or a bound, but the beauty of the series is precisely that it need not be perpetuated to exist in perpetuity. The proverbial writing is on the wall, but Kawara was never counting down the days so much as ticking them off, one by one, as time marches ever onward—and, in the Guggenheim, upward.