In Paris, a Celebrated Place for Protest Gets a Quietly Radical Facelift

Paris’s historic center for dissent, Place de la République, gets an expansion and an update. 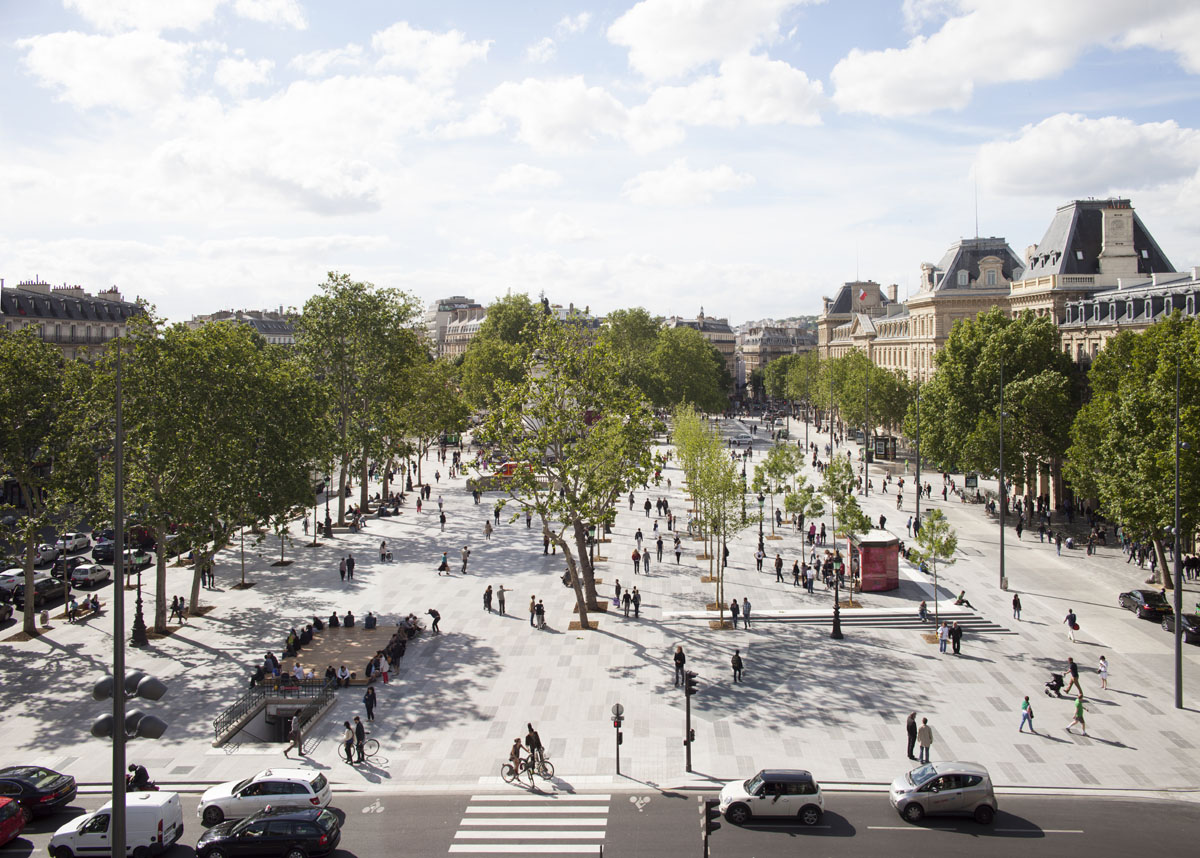 In Paris, rituals of political discontent are traditionally celebrated on Place de la République. It is a favorite kick-off point for the countless marches that define democracy in the French capital. But before taking to the street in a slow-moving procession, crowds block traffic all around the esplanade, creating a gridlock that can cripple the city from Sacré Coeur to the Opéra. Meanwhile, citizens get to unfurl banners and shout slogans. It’s legal, good, clean fun.

Two young architects, Pierre Alain Trévelo and Antoine Viger-Kohler, from the TVK agency in Paris, won the competition in 2010 to redesign the esplanade. A messy worksite for three years, the new Place de la République is at long last fully operational. But Parisians have yet to take the measure of the transformations. The angry strikers can still meet there—and they do—but they can no longer prevent others from going about their business. The venue proposes a new model for participative democracy: an all-inclusive rather than obstructive approach.

Have the architects betrayed the rebellious spirit of the place?

At the center of the plaza was a massive bronze statue on a monumental pedestal, a symbol of the French Republic. Inaugurated in 1883, it stood in the middle of a hub, on a traffic island, surrounded by cars angrily negotiating the tight circle. The statue is still there, in the same spot, but no longer at the center of it all, controlling the geometry of the space. The architects have extended the plaza behind it, not in front of it. They have marginalized the 31-foot-tall allegorical figure, working behind its back, so to speak.

It was a radical choice—a move intended to deinstitutionalize the plaza, effectively changing its symbolic orientation. Where people used to gather under the watchful eye of an authority figure—the statue—they now come and go peacefully, as they please. 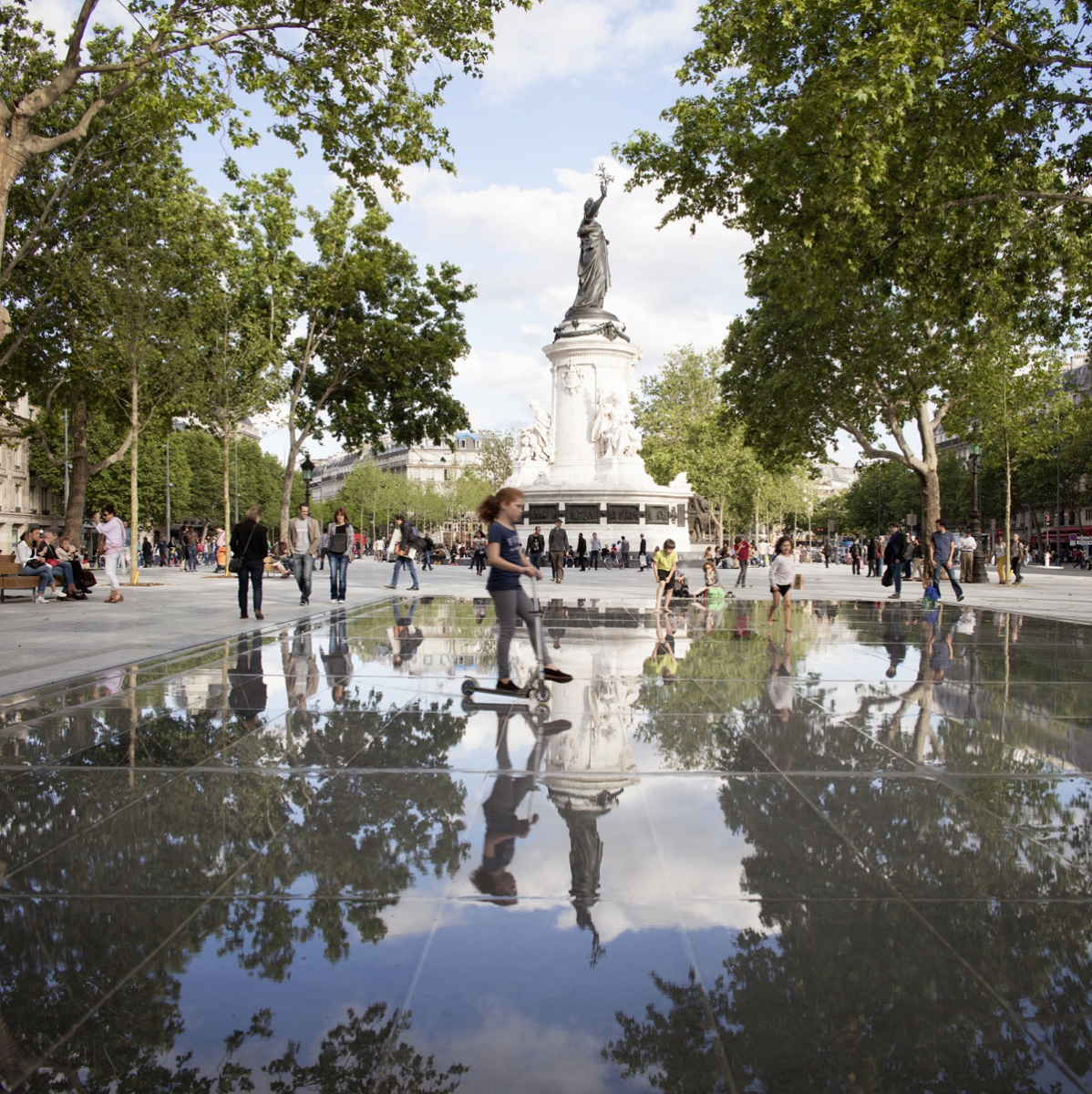 The “new” plaza now extends behind the historic statue that previously occupied its center.

“The statue still functions as a rallying point for various political groups,” says Trévelo. “But the presence of demonstrators no longer excludes other activities on the site. Skateboarders, tourists, old people, kids with parents, and workers on their lunch break can coexist with activists defending a cause.”

Today, the sparsely planted plaza is a vast patchwork of gently buffed concrete blocks, smooth as a sand beach at low tide. It is a gleaming emptiness that reflects the Parisian sky. The emphasis is on horizontal lines. The huge Northwest-Southeast rectangular esplanade, as long as the Eiffel Tower is tall, feels limitless, its perimeter seemingly receding into the distance through a slight haze.

At one end, next to an inch-deep mirror pool, a flat, glass-enclosed pavilion with a sweeping cantilevered awning serves as a café. At the other end, a low wooden platform provides a communal seating arrangement. On the backside—the sunny side—two shallow terraces compensate for the slightly convex profile of the plaza. For flâneurs in search of privacy, these two enclaves are observatories from which to survey the scene.

Have the architects betrayed the rebellious spirit of the place?
Each section of the plaza is modulated to adapt to different usages and events, from concerts to tournaments. In one area, old-fashioned outdoor board games can be rented for free. In another, people sit on steps and open their laptops. The monument—restored, refurbished, and repurposed—acts as belvedere. Around its pedestal, transformed into a viewing stand, couples dance day and night, ballroom style.

Quietly, the architects have achieved a paradigm shift. They’ve replaced the model of the Panopticon prison, in which a centrally located watchman keeps inmates under constant surveillance, with another model, in which the control is in the hands of residents, users, and taxpayers—a kaleidoscopic entity.

It has worked out, so far. Since the reopening of Place de la République in June 2013, there has been only one instance of police intervention, during a pro-Palestinian demonstration in July 2014 (the protest had been banned, an exceptional measure that had angered many). Otherwise, the plaza is a regulation-free zone. There are no barriers, no fences, no railings, no keep-out signs: climbing, jumping, skateboarding, roller skating, bicycling, dancing, picnicking, drinking, kissing, sitting, sleeping—you name it—is allowed. Miraculously, absence of rudeness is the only unwritten rule. 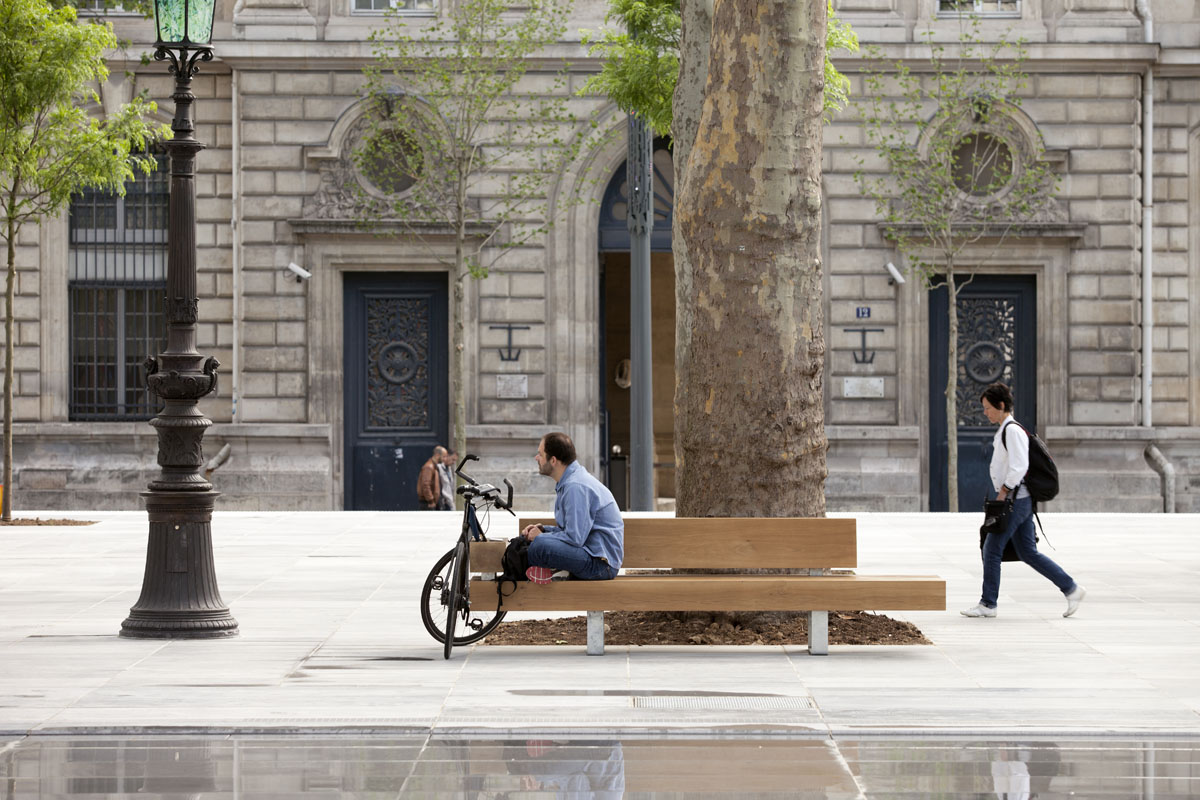 A cyclist watches Paris go by as he sits a while on one of the new benches installed in the plaza.

“Public spaces are messy,” says Trévelo. “We know that. We chose solid and sustainable building materials that can take the beating, are easy to clean, and can be replaced without difficulty.” He believes that quality is among the most cost-effective security measures. In France at least, people instinctively respect things that are well designed, well-built, and well-maintained— the Continental version of the broken-windows theory.

Still, antisocial behavior cannot be eliminated. French philosopher Michel Foucault, author of Discipline and Punish: the Birth of Prison, the famous 1975 treatise on the mechanisms of surveillance, reminds us that the concept of freedom breeds its opposite: “The ‘Enlightenment’, which discovered the liberties, also invented the disciplines,” he noted. The idea that you can’t have freedom without strict law-enforcement measures has often been invoked to justify the war against terrorism and the culture of surveillance prevalent today.

But there are pockets of resistance to this notion—particularly among urban planners and architects—Trévelo and Viger-Kohler included. Restrictive security norms are not the inevitable price we must pay for living in a democracy, they contend. Trying to lower risks by segregating different activities is the wrong strategy. A better alternative is to create opportunities for multimodal interactions between groups and entities. 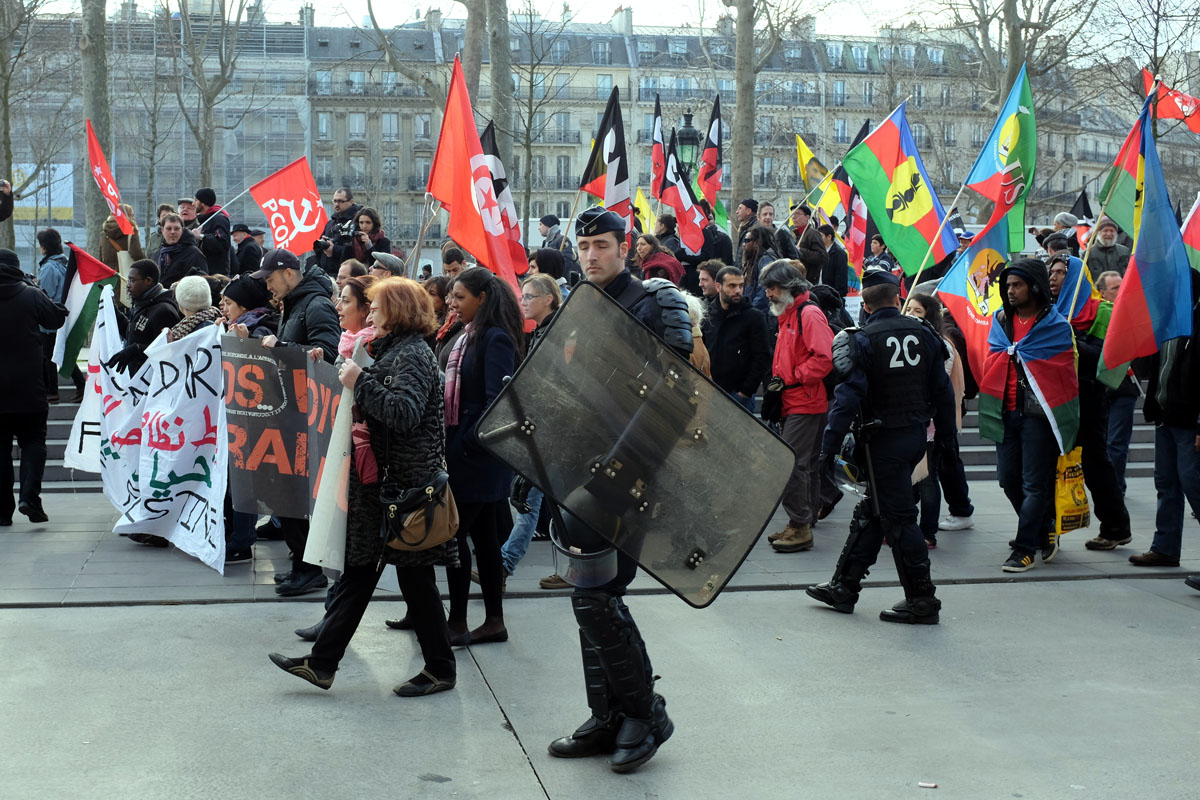 The architects cleared the main space of the park to accommodate protests.

In this spirit, they convinced the city to restore two-way traffic on three sides of the plaza to lower the level of frustration of drivers (and reduce their antagonism toward pedestrians). For the same reason, they opposed measures designed to curtail the number of cars. On the far side of the esplanade, they created a special slow lane, allowing motorized vehicles to share the pavement with foot traffic. They fought to ensure that bicycles could circulate freely among skaters and strollers. They designed access ramps for delivery trucks, minimizing their inconvenience in the eyes of the public.

Each proposal was motivated by a desire to decompartmentalize the use of space. “Our idea was to create an open-ended, programmable esplanade,” they say. “We can’t predict how technology will evolve and transform usages, but we can try not to foil future developments. The public venues we designed act as thresholds between now and henceforth. Our work is unfinished, on purpose. We wouldn’t want it any other way.”

There is no shortage of skeptics in Paris to denounce the gentrification of Place de la République—the gentrification of protest, no less. I was one of them—my first reaction, when driving by last fall, had been annoyance, like when a favorite secondhand bookstore is replaced by an overpriced sandwich shop. Mine is the woebegone generation: Things we didn’t even know we liked are taken away from us all the time.

My disenchantment was put to the test recently when I walked across the wet esplanade on a rainy day. I expected a wind-swept plaza, but discovered an enclave of equanimity. Each step I took lifted a weariness from my shoulders. I felt free, elated even. I began to skip. No one was watching me.