A new play fictionalizes the events that led to the demolition of the original Pennsylvania Station.

A scene from the play The Eternal Space, which dramatizes the events that led to the demolition of the original Pennsylvania Station.

Justin Rivers isn’t an architect, but he knows what it is to demolish a building. The playwright’s new work explores an event that began the preservation movement in the United States: the destruction of Penn Station in 1963. Rivers never walked through its great concourses but the events of 9/11, and a chance encounter with a book documenting the station’s untimely end, struck a profound chord. How did the New Yorkers of 1963 react to the loss of such a beautiful fixture of Manhattan? “A building so large and beautifully executed, to me, was bound to leave an emotional residue in the same way the glaring absence of the Twin Towers did on the skyline of New York,” Rivers says. After that initial interaction, “The play instantly took form.”

The Eternal Space revolves around two characters, Paul Abbot and Clyde Baldo, debating the fate of Penn Station. The former is a construction worker-turned photographer recording the demolition, the latter an English teacher. Abbot is fascinated with the works of the avant-garde and can’t connect to the vanishing Beaux-Arts transportation hub; while Baldo can’t accept its destruction. However, a “third character” is omnipresent on the stage: a trove of more than 1,000 never-before seen photographs document the station’s dismantling before the audience’s eyes. Gathered from no less than five photographers, these images are both background and centerpiece. 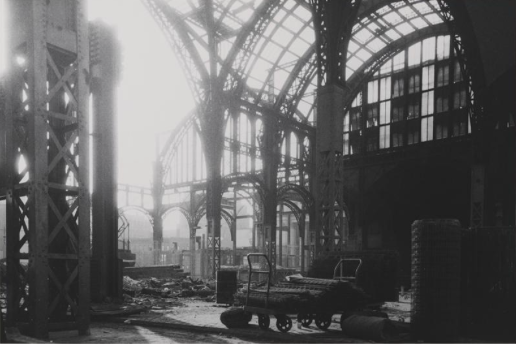 The visuals chart a journey to the past that will inevitably speak to the present. The events surrounding the Folk Art Museum, freshly wiped clean off 53rd Street, remind us of the powerful forces that shape New York City and all urban landscapes.  As the play progresses, the station slowly disappears into rubble and barren ground. Rivers describes his writing as blueprints, but instead of a building to be built, they detail a show to be methodically demolished. “So it’s reverse architecture,” Rivers says. “The play breaks down the two characters emotionally while breaking down the physical space” they inhabit—all at the same time.

To learn more about the play, running until November 6, visit its Kickstarter page or website.