Can “Oyster-Tecture” Actually Save Our Cities?

Oyster-tecture is one of several emerging practices that are shifting the way we think about infrastructure. The old ideals behind public works projects were focused only on enhancing people’s lives. Oyster-tecture provides needed services to people while also fostering vibrant, healthy ecosystems. The result is a more affordable, resilient, longer-lasting underpinning that surpasses New Deal-style […]

Oyster-tecture is one of several emerging practices that are shifting the way we think about infrastructure. The old ideals behind public works projects were focused only on enhancing people’s lives. Oyster-tecture provides needed services to people while also fostering vibrant, healthy ecosystems. The result is a more affordable, resilient, longer-lasting underpinning that surpasses New Deal-style construction. The technique can be applied at the small-scale such as in a single city, estuary, tidal river or bay or at the large-scale to aid an entire region, metropolitan area or megalopolis. In this part of my oyster-tecture series, I explore both scales to highlight the benefits of each and demonstrate how they are interdependent. The next post will go on to evaluate the viability and costs of developing infrastructure based on oysters.  Oyster-tecture is a big idea. It could save millions of jobs, generate billions of dollars in revenue, and protect coastal communities from ecological and economic collapse, and maybe even save the world.

I shouldn’t say oysters could save the world. They can’t, but they could save the majority of the East Coast and the Gulf of Mexico. They could also save the West Coast and most of the northern coast of Europe…and maybe even the coastal areas of the Mediterranean Sea, and probably a few parts of Asia too—so, not the entire world, but a large portion of it.

Not too long ago, there were trillions of oysters in and around the brackish waters of every estuary throughout the eastern seaboard of the United States. Literally, they were growing atop the shells of trilions upon trillions of other oysters that came before them. Today, they are all but extinct in 85% of their American historic range. A few wild clusters, a handful of restoration projects, and some oyster farms are all that remain of this once mighty dynasty of invertebrates.

The collapse of the oyster population is the result of only a few hundred years of overharvesting, pollution, and pathogens.  With their disappearance goes the motley group of benefits they freely provide. When the first Europeans “discovered” America, they found a land surrounded by crystal clear waters from Maine to Florida. These waters were crystal clear because oysters filtered every drop of that flowed into them. Oysters are incredible filtration organisms. One little Crassostrea virginica (the eastern species) is able to filter 4 gallons of water per hour. That means 10,000 oysters can filter 1½ Olympic-sized pools everyday. Imagine what trillions could do.

Clean water means a healthier fish habitat, which means healthier schools of fish. When you have lots of thriving fish, you have rich food sources for other animals like birds, larger fish of prey, and mammals (including homo sapiens).  Oyster reefs are the ideal habitat for a long list of game and anadromous (fish that migrate to and from seawater to freshwater) such as Spottailed Bass, Gray Snapper, Southern Flounder, Summer Flounder, Spot, Sheepshead, Striped Mullet, White Mullet, Silver Perch, Blueback Herring, American & Hickory Shad Short Nose & Atlantic Sturgeon, White Perch, and Striped Bass (to name a few). These aquatic creatures depend on the lagoons, tidal basins, and marshlands within the estuarine habitats in which oysters grow. Oysters act as the keystone species in these environments holding together a massive amount of biodiversity. Along with the fish, birds, and mammals they support, oysters also sustain 300 species of invertebrates such as shrimp, crabs, clams, snails, and worms as well as aquatic flora. 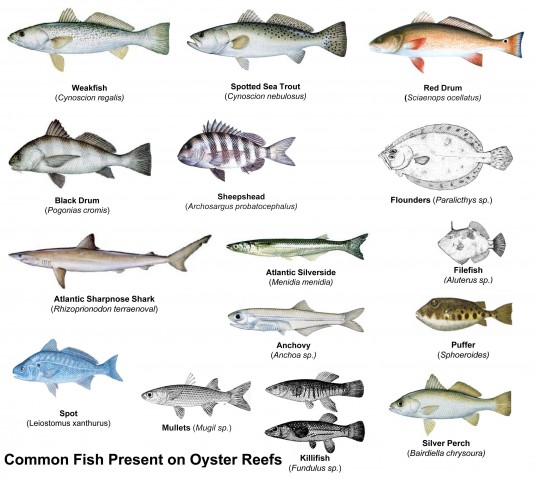 Healthy estuarine habitats are great for carbon sequestration, making them a natural climate change mitigation strategy. They protect shorelines from erosion and storm surges during hurricanes and other weather events. This keeps crowded coastal communities safe. Some studies show that oysters even clean the air.

These benefits come free, as long as there is a strong population of oysters— which is not the case today.  Their absence means that game fishing is at risk. Recreational anglers spend billions of dollars on their sport every year on the East Coast alone. 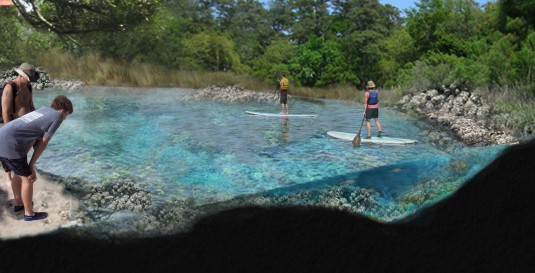 Cases of hypoxia (also known as dead zones) are being found in the open waters of the Atlantic Ocean such as Long Bay, off the northern coast of South Carolina. The most recognized dead zone is in the Gulf of Mexico – it has now grown to the size of Massachusetts. Hypoxia occurs when dissolved oxygen in water is reduced to a level detrimental to aquatic organisms and typically results in fish kills. Hypoxic events are partly due to contaminated storm water pouring into the streams and rivers that converge into the oceans, but they are also due to oyster populations disappearing. As an infrastructural element, oyster-tecture would play a large role in reversing these negative effects, while spawning the benefits at the same time.