"Sukkah City," A New Film on an Old Tradition

Can Biblical rules be re-imagined by modern architects?

Since its New York premiere, Viewings of Sukkah City, Jason Hutt’s 2013 documentary about an experimental sukkah-architecture competition held in Union Square, has inspired copycat competitions from Portland to St. Louis. But until now, viewings of the film had been limited to festivals and architecture schools. On March 24, Hutt’s film saw a wide release on iTunes and DVD, via First Run Features. In case you missed it the first time, here is our review.

Joshua Foer, author of the best-selling Moonwalking with Einstein, spent many a childhood afternoon watching home-improvement shows, and found enough inspiration there to buy a table saw with his bar mitzvah money. Each fall, his family would celebrate sukkot, a week-long Jewish harvest holiday commemorating the 40 years Israelites spent wandering the desert after their exodus from Egypt, by building a traditional sukkah outside their house. As he grew up, the ritual began to wane until, as an adult and living on his own, Foer decided to build one of the small, temporary dwellings for himself.

Soon after, he partnered with Roger Bennet, co-founder of the cultural organization Reboot, to sponsor a sukkah architecture competition in hopes of rekindling this ritual for himself, and to inspire architects and designers to re-imagine the structures while still following their Biblical rules. He also wanted to see if they could build contemporary sukkahs capable of relating the ancient meaning of the holiday. According to Foer, five percent of Jewish-American households assemble sukkahs today, mostly built from kits; Babak Bryan, one of the architects who entered the competition, agrees that “most of them are pretty boring.”

A week spent in a sukkah commemorates the impermanence of life during the 40 years of Jewish wandering through the Egyptian desert; the improvised structures are taken down at the end of the holiday. As Foer says in Jason Hutt’s Sukkah City, a documentary on the competition, their ephemerality is meant to help you understand your own. “By leaving the comfort of a solid roof and dwelling in something that is literary temporary,” he explains to the contest’s jury, before deliberations begin, “it forces you to confront that the things that you have are not permanent, and the ways in which you yourself are not permanent.” 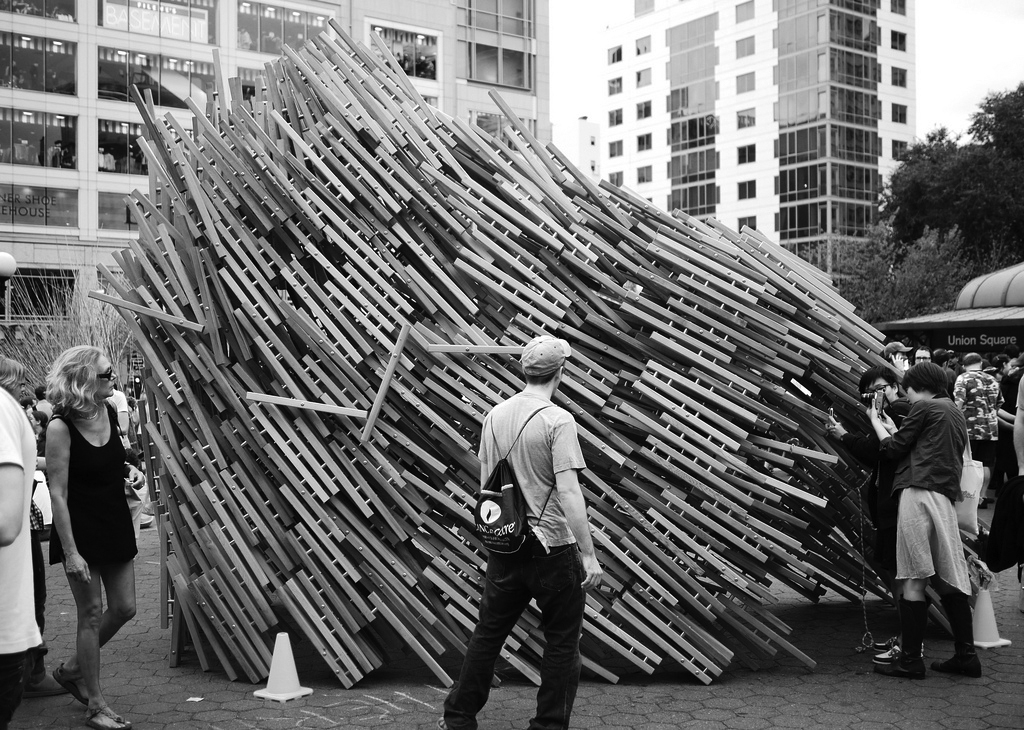 The star-studded jury of architects, designers, and critics attracted 600 submissions, some of which came from groups who had started out unsure of what a sukkah was, or had seen one only in passing. Hutt’s film, his third documentary, follows jury-room deliberations and internal arguments about which 12 entries should be selected for construction and their eventual transportation and assembly for a weekend exhibition in Union Square, as Foer oversees the process. The most successful entries find open-endedness in the traditional rules. One submission resembles a furry sphere; another is made almost completely from of wire.  One was inspired by an incredible mosque its architects saw in a Somalian-refugee camp in Yemen, constructed with sheets of cardboard woven together into walls and a curved roof.

Eventually, the sukkahs have to meet their toughest judges—the public.  At Union Square, Hutt documents observant Jews struggling to determine whether the experimental structures fall within the holiday’s regulations (they mostly agree that they do), as well as teenagers, families, and the usual mix of New York’s urban public coming into contact with a mix of Jewish tradition and the ability of experimental architecture to express ritual, history, and imagination.

The film begins a small national tour with a Union Square homecoming on September 22, when there will be a public screening. Additional screenings are scheduled for September 23 and 24 at the JCC in Manhattan, followed by a Q&A with some members of the competition’s jury and winning architects.

Alex Carp is an editor for the McSweeney’s Voice of Witness book series and a reader at Guernica magazine. Find Alex’s work at his website.