The High and Mighty Phragmites

The plumes of the mighty Phragmites australis.

In an earlier Green Team post, we discussed the role that landscape architecture and urban design can play in New York City’s effort to control its rat population. Now, we turn our attention to another nuisance species prevalent in NYC and East Coast urban wetland areas: Phragmites australis.

If you’ve visited New York or New Jersey’s marshy edges, you’ve no doubt seen the amber plumes of Phragmites, or common reeds, blowing in the wind. In many places, they might be all you see, as once Phragmites gets a foothold in a wetland, other species struggle to compete and quickly die out. By directly eliminating the bio-diversity of plant life in an area, this reed also destroys the habitat of many insects, migratory birds, fish, native mammals and water fowl.

According to the USDA, the non-native variety of Phragmites is thought to have first appeared in the United States in the 1880s, brought on the ballast of ships arriving from Europe. The plant can reach a height of 15 feet, spreading vigorously through a network of stolons that grow above soil, rhizomes that grow within the soil, and through seed dispersal. Prior to the arrival of the non-native Phragmites, there was a native variety, Phragmites australis ssp. Americanus which, though rare, can still be found growing today. Typically smaller and less aggressive, the native genotype is difficult to distinguish from the invasive.

In addition to its fast growth rate, what makes this reed powerful is its ability to thrive in a wide range of environments. It can grow in freshwater, brackish water, alkaline and acidic water,  wetland buffers, and drier upland areas. The only conditions that somewhat challenge Phragmites are deep standing water and strong wave and current action that causes the reed to break. In freshwater, Phragmites can be part of a healthy wetland community if its expansion is kept in check by other species. However, always a threat, this indomitable reed will take advantage of any ecological site disturbances. In brackish wetland environments, very few native plants can compete, especially when excess nutrients in waterways from CSOs, fertilizers and other sources allow Phragmites to grow rapidly.

It’s almost impossible to eliminate Phragmites without addressing the larger site issues that allow Phragmites to proliferate. Peter Del Tredici points out in his article The Flora of the Future that Phragmites is “an indicator of impeded drainage and as such, is a symptom of environmental degradation, not its cause.” The trouble is, if we don’t control these stands, we are essentially allowing the reed to continue its expansion as each plant contains large amounts of seeds that take flight in the wind or are transported by wildlife between November and January. 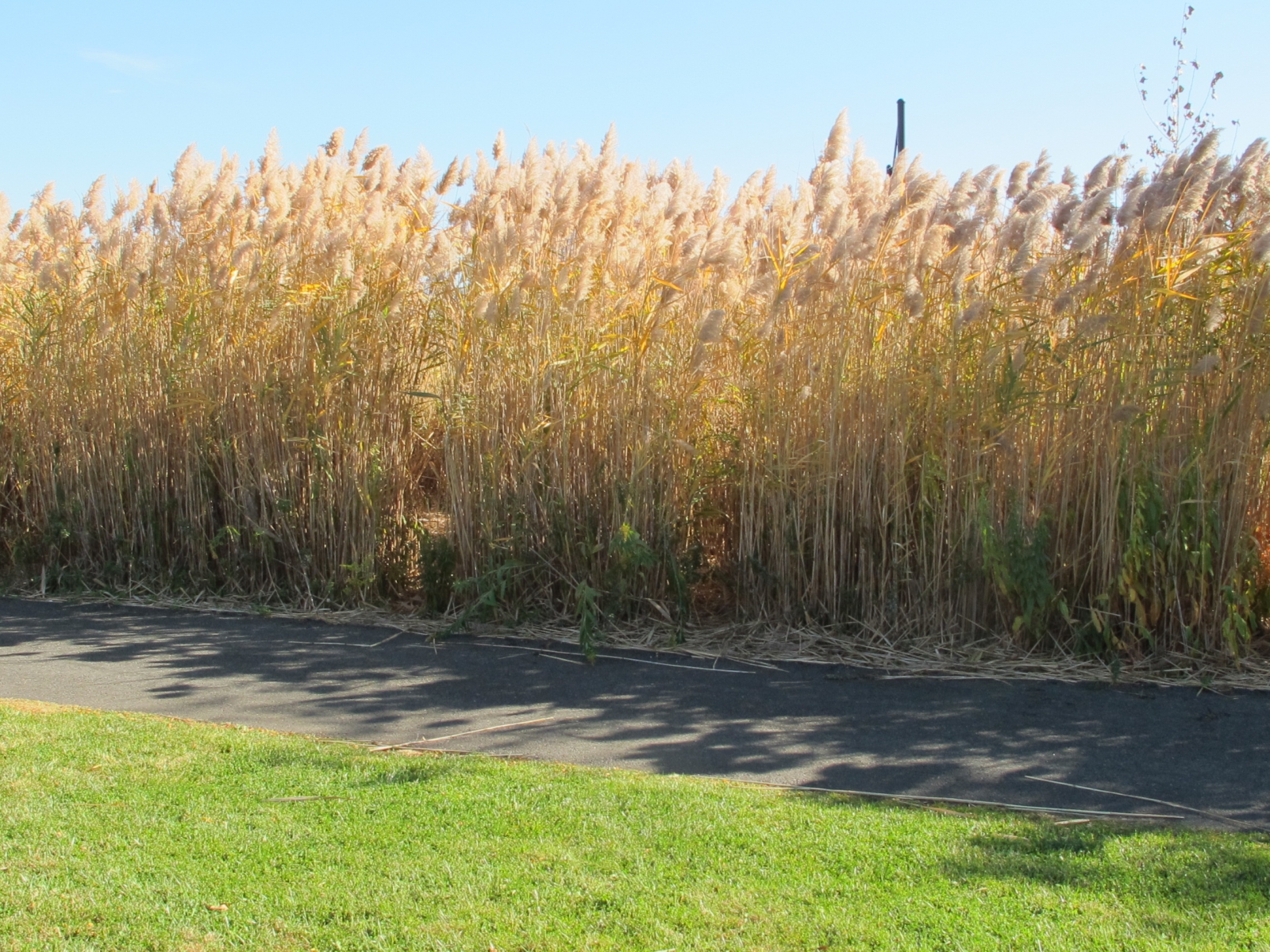 A stand of Phragmites growing in a New Jersey waterfront park currently held back by an asphalt walk.

The key to control is prevention. As landscape architects, there are numerous best practices we can employ on sites vulnerable to Phragmites invasion. During the design phase, ensuring proper drainage is essential. Unless the project is in a wetland or designed to retain water, grading and drainage can be used to create drier upland conditions that do not favor Phragmites. If the project is in a wetland, maintaining deeper water levels or allowing tidal flux to function can help to create a healthy site condition. Abrupt transitions from dry upland areas to wetlands will also help reduce its habitat. And finally, shade, paving, and grass can be used.  Shade will help inhibit the growth of Phragmites while hardscape set on top of a well-compacted subgrade can slow the advance of below-ground rhizomes, and regular mowing of turf grass can exhaust the energy of invading Phragmites culms.

During construction, soils that contain Phragmites rhizomes should be carefully handled and disposed of off-site. Minimizing the exposure of bare unplanted soil helps prevent seeds from germinating. In Phragmites prone sites, we encourage owners to develop a monitoring and rapid response protocol so that small stands can be controlled and eradicated early before they spread. Maintenance staff with proper training and herbicide licenses can expedite this process. 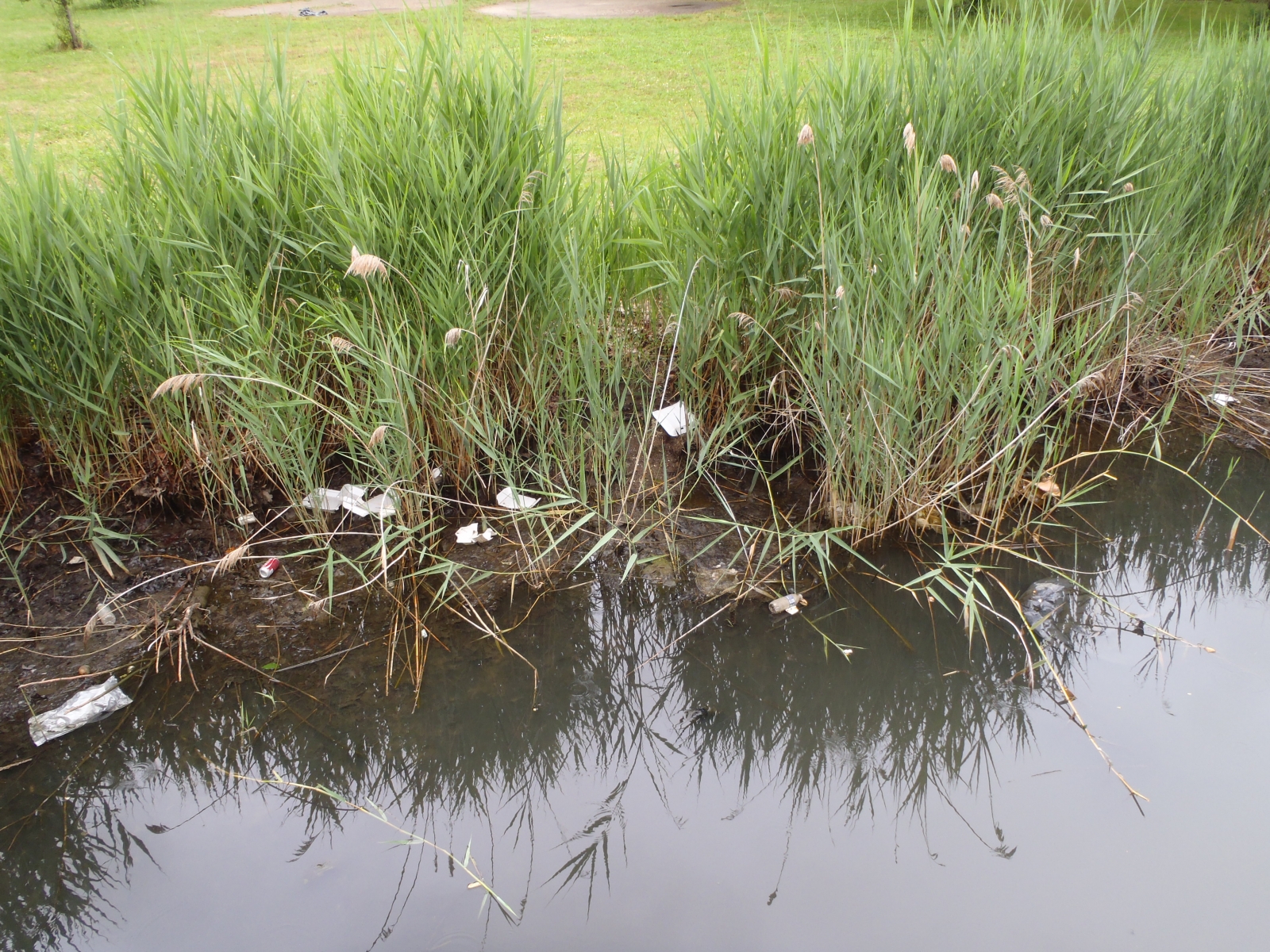 What can be done if Phragmites has already moved into a site? When we encounter it growing on a site, we look for management techniques that match a client’s financial and staffing resources. One of the first things to establish before selecting a management strategy is the stability of the wetland and the rate of the reeds expansion. Through regular site monitoring and measuring, and if resources allow, the use of tools such as GPS and GIS software, wetlands can be inventoried and the growth of Phragmites can be mapped.  These maps are valuable to land managers and maintenance staff who are charged with documenting spread and efficacy of treatment measures.

The Nature Conservancy reports numerous successful management strategies that can be put in place once it has been determined that a stand is expanding. These methods include controlled burns, manipulation of water levels, the use of herbicides, manual cutting, and covering with plastic and even grazing. And because Phragmites is averse to deep standing water and wave action, when conditions permit, flooding and tidal marsh restoration are other management options. The management strategy selected is dependent on the size of the stand, the time of year, the larger site context and the personnel available. The goal of these techniques is to control and slow spread and limit expansion, because if site conditions are favorable for its growth and these larger site conditions are not remedied, Phragmites will likely find its way back. The reality is that projects in Phragmites vulnerable sites will likely need to manage the plant during the lifespan of the project.

While the dominance of Phragmites may be inhibiting the bio-diversity we desire from our wetlands, all is not lost! The reed is still providing important biologic functions such as sediment stabilization and the absorption of pollutants and excess nutrients common to these degraded areas.

Johanna Phelps, RLA, is a Senior Landscape Architect at Mathews Nielsen Landscape Architects in New York City.  Since receiving her MLA from the University of Pennsylvania in 2004, she has worked on urban design projects in Manhattan, Brooklyn, and Philadelphia, and multiple campuses including Haverford College, Brooklyn College, University of Pennsylvania, and Rockefeller University. From skateboarders to Phragmites to rats, Johanna is interested in the evolution of urban spaces and their occupants.