The Life, Death, and Rebirth of Urban Cemeteries

The Green Team on the restoration and preservation of historic churchyards

Our last post focused on the restoration of New York’s oyster reefs as a way to improve the local ecology in the wake of storm events and climate change. Now, we turn our attention to an urban need of another kind—the restoration and maintenance of historic cemeteries as vital open spaces as cities grow nationwide.

Last fall, Designboom organized a competition, “Design for Death Architecture” in which participants were asked to examine cultural traditions for burial and memorialization as they relate to cemetery archeology. The customary colonial and early American burial practice held that the deceased be interred in plots adjacent to a church. However, by the eighteenth century, churchyard burials became impractical and were considered a public health hazard as the density of cities increased and epidemic outbreaks became more frequent.

With the growth and expansion of cities in the nineteenth century, it was not uncommon for churchyard burial grounds to be relocated or built over. A number of notable locations in New York City such as Washington Square Park, Union Square Park, and Madison Square Park have succumbed to this once accepted practice. By the twentieth century, local and federal laws were enacted that made disinterment for development purposes a cumbersome legal process. Today, many of these former burial sites are protected and landmarked as significant historic sites. Mathews Nielsen is currently working on the ongoing restoration of one these, St. Paul’s Churchyard, on Broadway in Lower Manhattan. 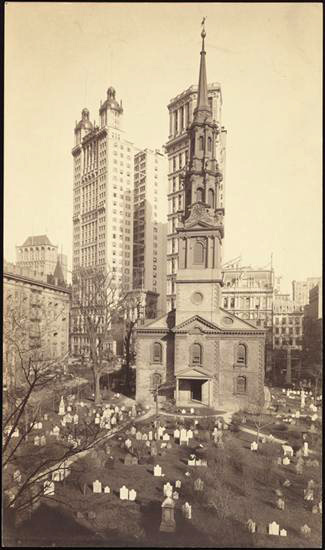 Built in 1766, St. Paul’s was the site of the worship service prior to George Washington’s inauguration. More recently, it played a significant role in the events on and after September 11th. Located directly across from Ground Zero, the chapel served as a refuge for hundreds of volunteer workers during the eight months of debris removal. Today, because of its proximity to the World Trade Center Site, St. Paul’s has also become a popular tourist destination and is visited as part of the 9/11 memorial tour, receiving more than three million guests a year.

The physical, environmental, and topographic conditions at St. Paul’s combined with the increasing popularity of the site have resulted in severe soil erosion and compaction. These were further exacerbated by numerous existing site problems, including dense tree canopy cover, aging plant material, non-functioning irrigation systems, and lack of proper maintenance.

Evaluating the existing drainage and pedestrian-use patterns revealed a comprehensive breakdown of the stormwater and circulation systems. Approaching the landscape’s function as an interconnected natural system, we were able to develop a comprehensive intervention to address both erosion and sediment control, while also making circulation improvements. 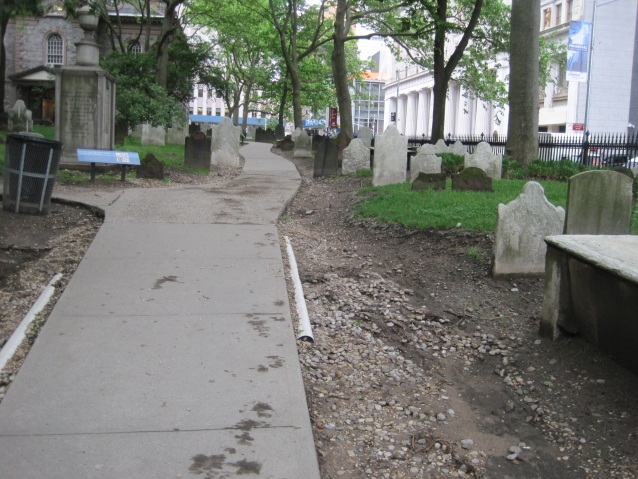 Site conditions at St. Paul’s Churchyard: heavy erosion due to compacted soils, use patterns, and loss of vegetation.

Restoration measures had to be minimally invasive due to the unique nature of the churchyard as both a cemetery and a landmarked site. Tackling the soil compaction issues posed a particular challenge because of the sensitive nature of the landscape and subsurface conditions. Typical methods for increasing permeability proved unusable as the use of mechanical equipment might unearth human remains. As a result, soil decompaction was completed by hand, and to a maximum depth of three inches. By installing check dams with vegetative cover along the major stormwater channels, the velocity of water was slowed, reducing runoff that contributed to erosion issues.

Subsequently, we addressed bare soil on slopes that were subject to extensive erosion. At these locations, erosion control measures including a coconut fiber mat and fiber mesh were installed with plant material for stabilization purposes. These mats degrade over time and actually help to improve soil quality through the introduction of organic matter.

To prevent further erosion and restore the churchyard to its original verdant character, a specialized mix of shade tolerant, quick-germinating seed was developed to stabilize the shaded ground plane. The tree canopy was evaluated by a certified arborist, and mature trees were pruned to allow for increased sunlight to reach the new ground cover. 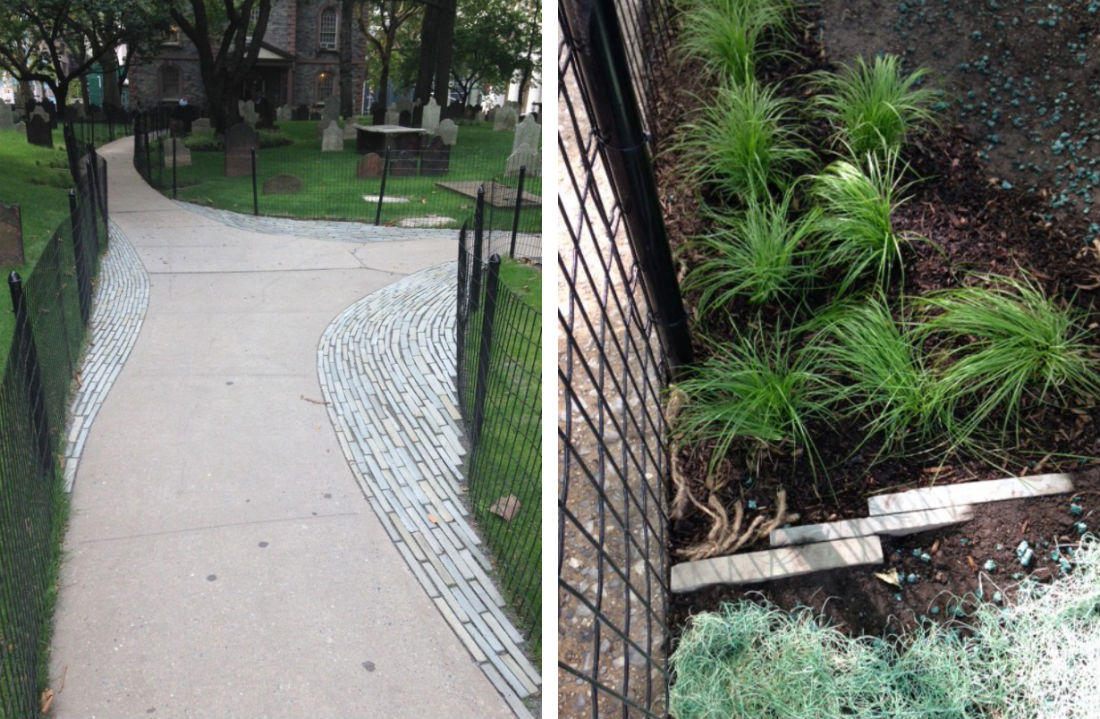 Site usage was closely studied to determine where paving changes could reduce wear and tear on the landscape. The initial idea was to increase the narrow three-feet-wide paths to accommodate more visitors. However, due to the location of the grave-markers adjacent to the pathway, increasing the width of the path was not possible. Instead, we designed a network of bluestone “rumble strips” to increase the width in areas of highest use.

The integrated restoration process of St. Paul’s Churchyard is nearing completion. By recognizing the interconnectivity of landscape components in this fragile landscape, the design team was able to restore the churchyard in a respectful manner through a site-specific approach to soils, vegetation, and use.

In our next Green Team post, we will explore another tourist activity common in New York City—kayaking. Stay tuned!

Heather Fuhrman, ASLA, is a fearless baker, marathon runner, and practicing landscape designer at Mathews Nielsen Landscape Architects in New York City. Since receiving her MLA from the City College of New York in 2008, she has continued to pursue her interest in brownfield reclamation and waterfront restoration efforts in the urban landscape. She has worked on a number of large scale waterfront projects, brownfield opportunity studies, and stormwater mitigation projects.