From amber waves of grain to grandma’s “sweet potatoes,” the Green Team unravels the history of the Thanksgiving Landscape.

This is one in a series of Metropolis blog posts written by members of Mathews Nielsen Landscape Architects’ Green Team that focus on research as the groundswell of effective landscape design and implementation. Addressing the design challenges the Green Team encounters and how it resolves them, the series shares the team’s research in response to project constraints and questions that emerge, revealing their solutions. Along the way, the team will also share its knowledge about plants, geography, stormwater, sustainability, materials, and more.

As we prepare to sit down and stuff our collective faces, let’s take a little time to fill our brains before we fill our bellies. In preparation for the marathon shopping day that is Black Friday, Americans will spend Thursday carbo-loading with stuffing, biscuits, and pie alongside traditional turkey, gravy, and cranberry sauce. So, gather ’round the table, and feel free to share these Thanksgiving facts and figures with your family and friends.

I Yam What I Yam, Right?

Yams and sweet potatoes are often referenced interchangeably, but the two are actually unrelated, distinct species of root vegetables. Native to the Americas, sweet potatoes (Ipomoea batatas) are available in a range of hues, with the orange variety most commonly referred to as “yams.” However, yams actually originate in tropical regions of Africa and Asia and are the tuber of vines in the family Dioscorea. Sweet potatoes are dicots and more closely related to Morning Glory than to the monocot yams. The confusion about these is thought to stem from the misidentification of them by Africans in America during colonial times. This association was perpetuated in our culture by the USDA, which requires that the orange variety of sweet potatoes be identified as “yams” alongside their sweet potato labeling. 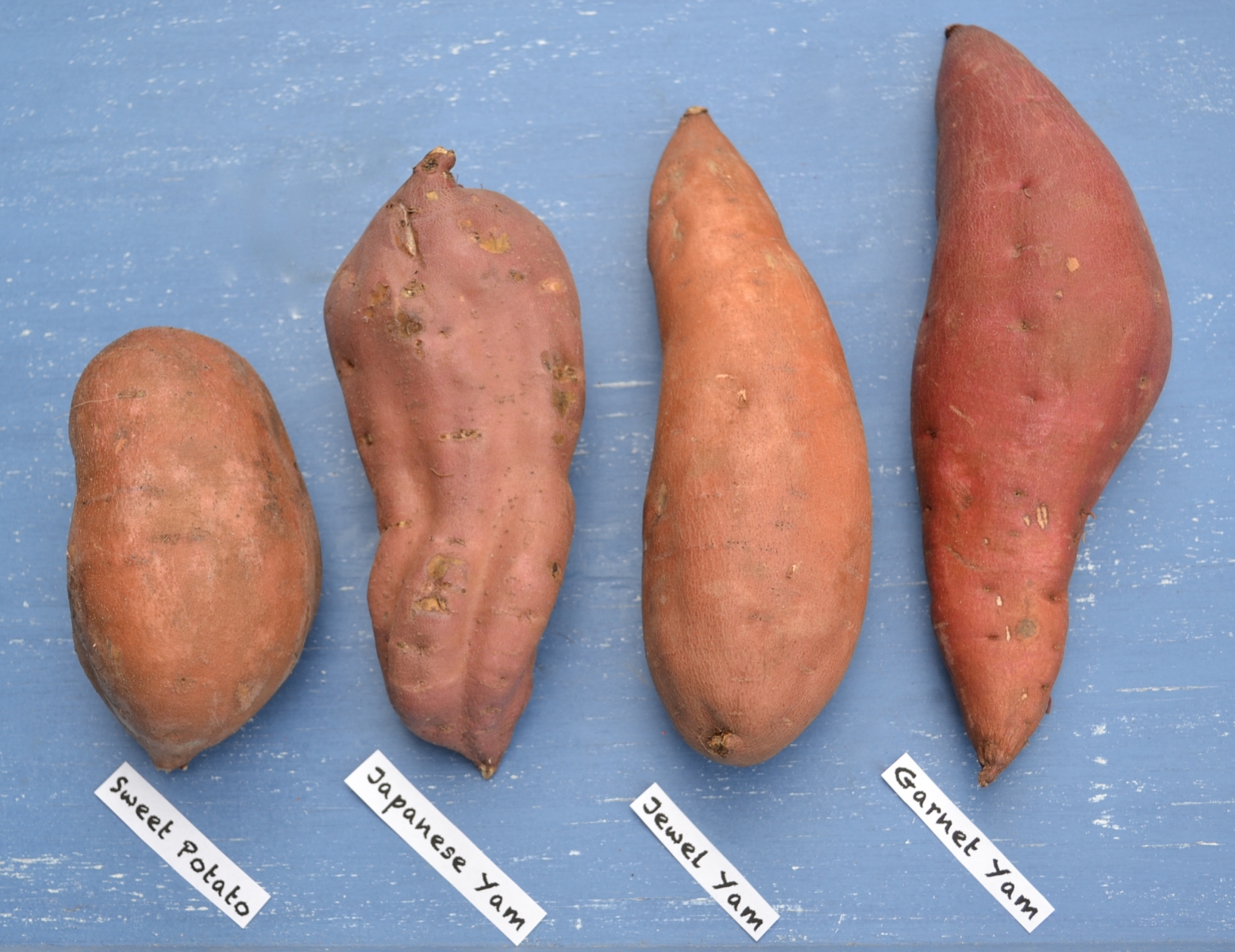 While turkey plays a key role in Thanksgiving celebrations, the “turkeyfoot” plant is another recognizable seasonal feature. More commonly known as “big bluestem,” Andropogon gerardii is a tall, warm season grass with striking fall form and color. A major food source for the American bison, it is a Midwestern native prairie grass that is also used for erosion control, conservation, habitat restoration, and accent planting in native gardens. The common name is a reference to its recognizable 3-prong seed heads. The blades of this grass turn a seasonal bronze color in the fall.

The seasonal color variation and texture of Andropogon geradii (left) make it a popular species in native gardens. The seed heads resemble a turkey foot (right), giving it its common name.

The Mayflower, an icon of American history, is the ship that delivered the pilgrims to Plymouth Rock, but it was not intended to make the trip alone. As reward for its successful arrival in the New World, the ship became the namesake for the native North American species, Epigaea repens, with the common name “mayflower,” a plant that was plentiful in the region.  A ship with an equally botanical moniker, the Speedwell, was to accompany the Mayflower to the New World, but was deemed unseaworthy shortly before the scheduled departure from England. There are hundreds of Speedwell varieties (genus Veronica) native to the Northern Hemisphere. In North America, however, introduced species tend to become weedy, if not invasive. Maybe it’s best that the Speedwell was deterred from its voyage.

Courtesy New Hampshire Garden (l) and Down the Garden (r)

Everybody Loves a Parade

Inaugurated in 1924, the Macy’s Thanksgiving Day Parade is now in its 87th year. On November 28, 2013, an estimated 3.5 million spectators will line the streets of New York as inflated superheroes and cartoon characters pass overhead. Preparations begin the night before, when the city removes traffic signals, streetlights, and anything else that might get in the way of the oversized balloons, each handled by 50-70 volunteers. It will take 75 sanitation workers and 15 officers from the Department of Sanitation to clean up the nearly 40 tons of debris produced by the crowd. 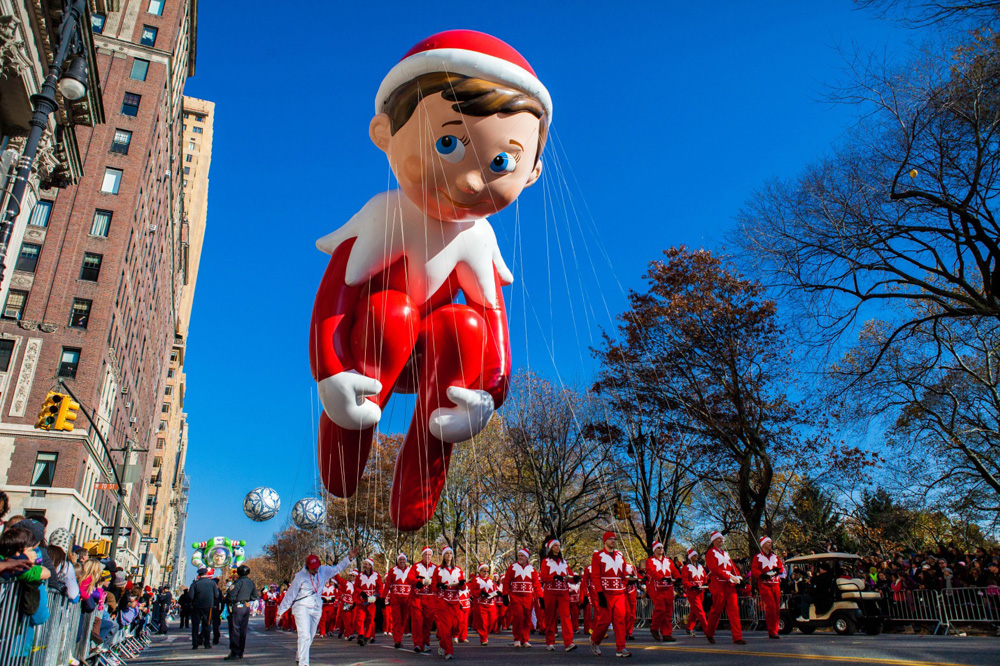 Elf on a shelf floating down Central Park West.

What would Thanksgiving be without the scents and flavors of the traditional baking spices of nutmeg, cinnamon, allspice, mace, ginger and cloves? These dried seeds, berries, roots and bark are the essence of pumpkin pie. Nutmeg and mace are actually two different parts of the same plant, Myristica fragrans, native to the Banda Islands of Indonesia. Nutmeg is the inner seed of the tree’s fruit, and mace is the bright red lace-like covering over the seed. In addition to flavor, nutmeg has long been prized for its medicinal properties and was even used to ward off the plague. Today, it’s used as an anti-bacterial and anti-inflammatory agent as well as a digestive aid. Opinions differ on whether nutmeg or mace is the more robust of the flavors, possibly because of the fact that nutmeg loses its flavor quickly after being ground. So, for the most flavorful nutmeg, buy only whole seeds and grind them yourself, right before using. 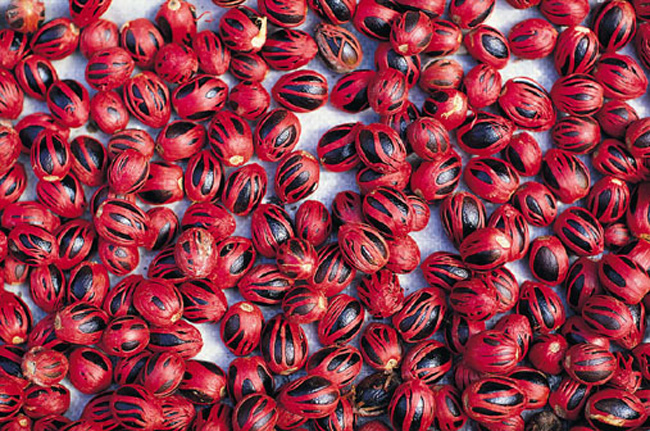 Myristica fragrans – the source for both mace and nutmeg.

Pumpkin pie has been a traditional item on the Thanksgiving menu for hundreds of years, but how did it become associated with this holiday? Pumpkin-related seeds, like squash, date back to 7000 BC in Mexico. Cucurbita varieties (belonging to the cucumber family) are native to North America. When the Plymouth Plantation settlers arrived, they observed Native Americans roasting and boiling pumpkins to help restrain their hunger. In an effort to make the pumpkins’ flavor more appealing, settlers sliced off their tops, scooped out their seeds, and filled them with an array of spices, honey, and milk before cooking. These stuffed gourds became America’s first pumpkin pies. 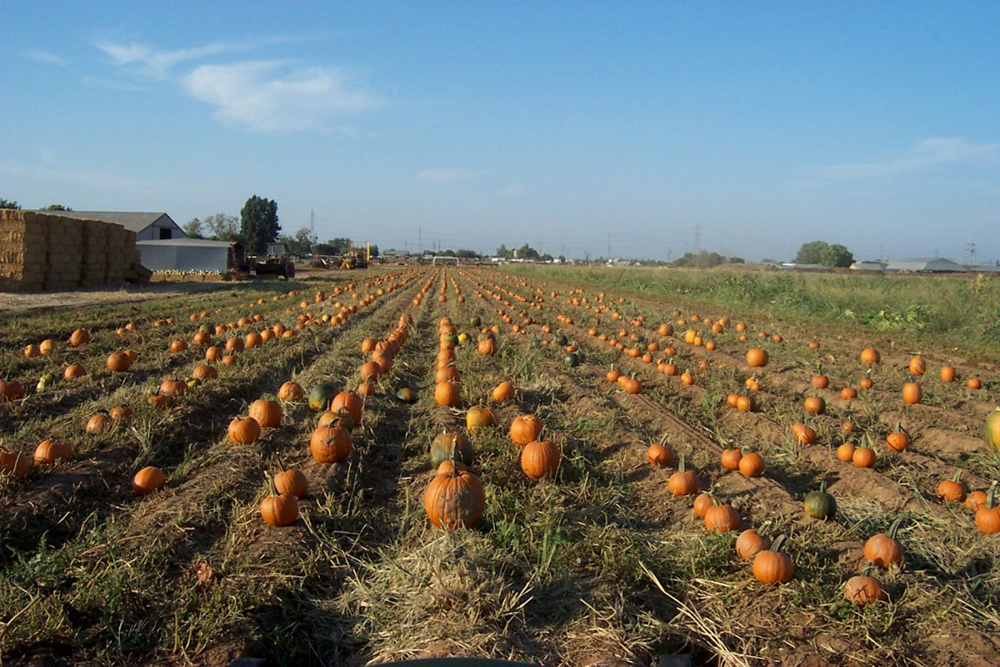 Pumpkins ready to be harvested.

Cranberries, Vaccinium oxycoccos, are a native fruit that grow wild in wetland areas.  They require a unique soil condition consisting of layers of organic material and sand. Native Americans were the first people to enjoy this fruit as a food source, as well as to use it as a natural dye for clothing and rugs. Long before scientists understood the health benefits of cranberries, Native Americans used them for their medicinal value and also created a survival food, pemmican, comprised of venison and mashed cranberries. Cranberries are typically harvested in the fall by flooding the bogs where they grow and allowing the berries to rise to the surface for easily accessible collection. During Thanksgiving week 80 millions pounds of cranberries (about 20 percent of all cranberries grown) grown in the United States, are gobbled up by Americans. 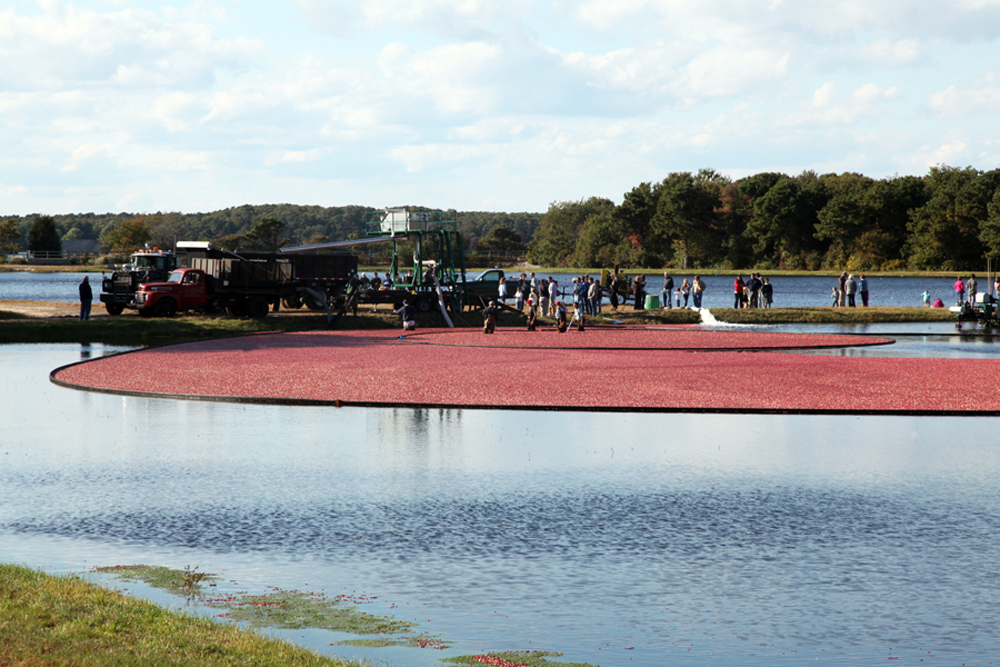 Cranberry harvesting in the Pine Barrens of New Jersey.

Whether you celebrate this Thanksgiving with colorful parades or football games, daylong feasts or shopping marathons, there are plenty of holiday traditions for which to be thankful.

In our next Green Team post, we will revisit our theme of digital landscapes, taking you on a tour of a recently built project that uses mobile technology as a way to experience the natural world. Stay tuned!

Terrie Brightman, RLA, ASLA is a practicing landscape architect at Mathews Nielsen Landscape Architects in New York City with nine years of professional experience. Since receiving her BLA from the Pennsylvania State University, she has worked on riverfronts in Pittsburgh, private residences in California and Florida, a sustainable community in Turkey, and multiple public parks, plaza and waterfronts throughout New York City.

Johanna Phelps, RLA, is a landscape architect at Mathews Nielsen Landscape Architects in New York City. Since receiving her MLA from the University of Pennsylvania in 2004, she has worked on urban campus projects in Manhattan, Brooklyn, and Philadelphia, a botanic research institute in Texas, and a public plaza in Bilbao, Spain.