The View from PSFK 2013: How Technology Will Change Us & Our Cities

PSFK 2013 centered on the connections between humans and technology

As Neil Harbisson lifted a red sock up to the end of the narrow, black device extending from the back of his head, a note sounded. After a moment he set down the red sock and reached for a blue sock, this one playing a different note as he brought it to the sensor suspended over his forehead. Repeating the gesture several times, new notes sounded for each different sock – he was playing a “color concert”. Although Harbisson cannot see colors, the device attached to his head, known as an eyeborg, allows him to perceive them through the frequencies they emit, including many which are not perceptible to normal human eyes. The performance was a fitting end to the 2013 PSFK Conference, a day of talks, panels, and presentations centering on the latest in technology, design, and brand innovation.

Much of last week’s PSFK conference, which took place April 12th at the Museum of Jewish Heritage in Lower Manhattan, centered on the connections between humans and technology, and how advances in technology are changing how we relate to the world. Other major topics of the day were strategies for successful branding, and several plans to reshape New York City for the better in the coming years. Harbisson, who in addition to his concert was also the day’s first speaker, explored the possibility of augmenting human senses with technology, similar to how he has done. He believes that, in a way, we are all handicapped in that our natural five senses do not allow us to perceive the full range of inputs from around us. Through the use of technology, our range of perception can be expanded and our awareness increased. His group, the Cyborg Foundation, works to help people augment their senses through technology, as well as advocating on behalf of cyborgs like himself. 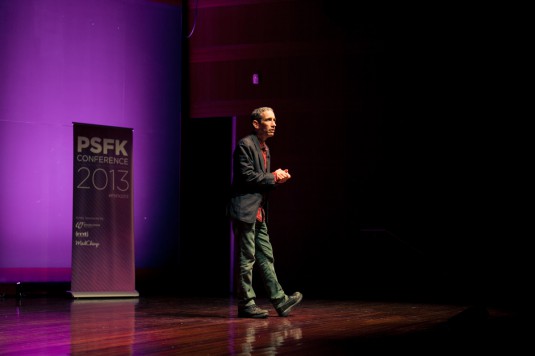 Media theorist Douglas Rushkoff had a less optimistic tone concerning the role technology is playing in society. His talk outlined the main ideas of his new book Present Shock, which argues that much of technology’s advances have created a world of interruptions, and have drawn our attention too much to the immediate moment at hand. The repercussions of this, he argues, range from the decline of narrative storytelling in all forms of media, to the rise of dangerous financial trading focused on short-term profit and economic growth. Abigail Posner, head of strategic planning at Google, also mentioned the everyday distractions of the Internet, but saw them as a positive factor in our lives. Her belief is that the visual web allows us to find wonder in the everyday, and bring happiness to ourselves by sharing it with others. Posner explained that the visual web is so appealing because it “lets us see the world for the first time again with new eyes.” With this in mind, she outlined a framework for creating viral marketing content on the web. Some of her strategies include “finding the mundane and making it wondrous” (think the popular “Will it Blend” series for marketing blenders), and creating content that becomes better when shared. 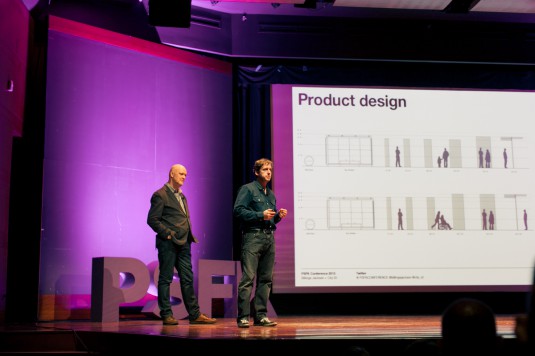 Mike Rawlinson and Eoin Billings present their new wayfinding system for New York, which is being gradually installed across the city.

Several presenters showed up with their visions for improving the city of New York. Mike Rawlinson of City ID and Eoin Billings of Billings Jackson Design presented a project they collaborated on to create a new wayfinding system for the city. The signs they worked on will soon be appearing across the New York, and are designed to be a simple, consistent visual framework for navigating the city. The straightforward design of the maps focuses on identifying nodes, landmarks and other common reference points to make them as user friendly as possible. The first of these signs are now being installed in a few locations, but far more are planned for the coming months and years. In light of Harbisson’s presentation, it struck me that these future iterations of the system may want to look into moving beyond the purely visual, and extending their utility to the visually impaired community. 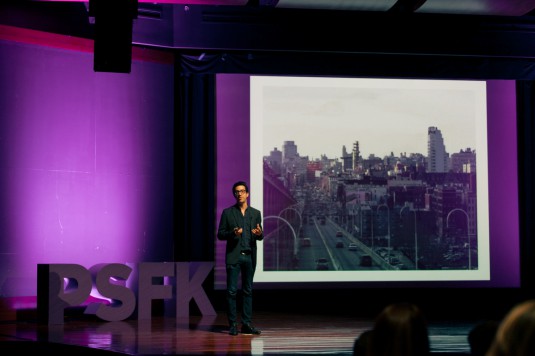 Dan Barasch gives an update on the development of the Lowline.

Another NYC project, with bigger challenges ahead before it can be realized, came from Dan Barasch, co-founder of the Lowline. His idea for creating an underground park on the Lower East Side has been gaining significant traction in recent months, though several pieces still must come together before the Lowline can be made reality. A recent warehouse exhibition proved the feasibility of the sunlight-directing technology that would make the park possible. The next step, Barasch says, is to continue building community support and to gain official access to the proposed site. The conference also proved big on branding strategy talks. Many prominent figures from successful new companies relayed the lessons they learned from their startups. Etsy’s Matt Stinchcomb briefly touched on how the company’s goal to “re-imagine commerce in ways that build a more fulfilling and lasting world” has resonated with their users and small businesses. Neil Blumenthal, founder of Warby Parker, emphasized the importance of building a brand narrative, combined with providing quality and service. He realized that his customers first and foremost care that the glasses they buy look good on them, and secondly they want good value and service. By combining this with a philanthropic mission (for every pair sold, a second pair of glasses goes to someone in need), Warby Parker has created a brand that customers want to talk about with those around them. According to Blumenthal, half of the company’s growth has been driven by word of mouth. 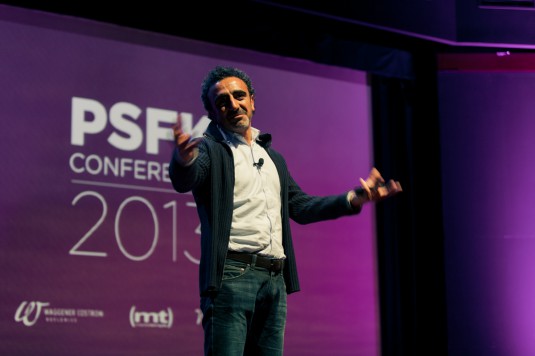 The final keynote speaker, Hamdi Ulukaya of Chobani yogurt, was a refreshing reminder that not all successful businesses are coming from hip, New York-based 20-somethings. Ulukaya, a Turkish immigrant, recounted the story of his company’s rise to success. Beginning with the purchase of a dilapidated yogurt factory in 2005,  was able to successfully turn Chobani into one of the most successful yogurt companies in the world. He credited his success to the combination of a great brand mixed with a strong sense of community. Most importantly Ulukaya says, his brand was able to succeed because, from the beginning, it has continued to look forward. Ulukaya’s talk, like the rest of the conference, was decidedly optimistic in tone. The day was about improvements; in technology, innovation, art, and infrastructure. The lingering feeling I came away with was that everyone present – every speaker, panelist, and attendee – was looking towards the best future possible. Photos courtesy Catalina Kulczar, PSFK.