CreativeMornings began seven years ago, when Tina Roth Eisenberg of Swissmiss began gathering the creative community of New York for breakfast and a short talk once a month.

Organizers of CreativeMornings, a breakfast lecture series for the creative community, from around the world gather onstage after a Steve Powers Creative Mornings talk at MOMA.

In 2008, Tina Roth Eisenberg – known to many through her popular SwissMiss blog – invited friends to informal gatherings once a month in New York. She also brought in designers to give inspiring talks to the group over coffee and pastries. Seven years later that simple concept is the formidable organization, CreativeMornings, with designers and other creatives in 130 cities from New York to Mumbai to Santa Fe to Guadalajara providing monthly doses of inspiration, caffeine, and community to over 13,000 attendees worldwide. CreativeMornings has been described as TED for Design Wonks and a monthly campfire for designers and has seen speakers ranging from such prominent figures in the design world as David Kelley of IDEO, Debbie Millman and Michael Beirut to urbanism writer Alissa Walker and local architects Chris McCray in Austin and Alan Maskin of Olson Kundig in Seattle.

I spoke with Tina (a recovering graphic designer) and CreativeMornings’ Chief Happiness Officer Sally Rumble (a recovering industrial designer formerly with Smart Design and Quirky) about the need for a global guild of creative types, other than existing institutions like the AIA and AIGA and why, in our digital age, offline connections are more important than ever for designers.

Rebecca Greenwald: You’ve described your desire for CreativeMornings to be the unofficial global guild of the design and creative community. Why do you think the need for this kind of organization exists and how is it not being served by existing more traditional institutions like the AIA, AIGA, ASID, ASLA, etc?

_: I think the most important part of this vision is that the silos of creativity as we’ve had them up until now need to break down. The beauty of CreativeMornings is that when I attend one of these events I might sit next to any kind of creative professional or aspiring/would-be creative professional and that’s the thing that really gets me excited. So when I say a global creative guild, I mean for it to be as open, inviting, inclusive and accessible to all creative types as possible.

What I’m envisioning years down the road is us serving as the rolodex of the creative world, where we’d have a global database of companies and individuals to easily connect, find and engage with one another. We’d also have a variety of events and ways to get together in the creative industry. We are starting to do this in New York with our ‘Field Trip’ prototypes to creative firms throughout the city. 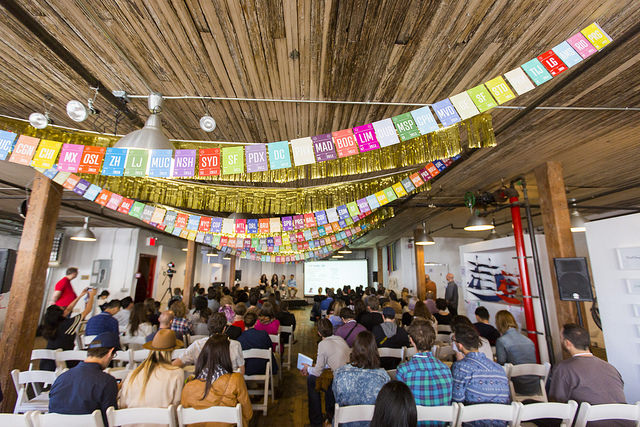 RG: Clearly there’s a hunger for designers to build meaningful connections in person but maybe feel like their existing options are limited or aren’t tailored to their needs. Why do you think so many designers in so many cities around the world are donating their time completely pro bono for the sake of creative community?

SRumble:  I’ll start with what I hear the most when I interview with potential hosts who want to start a chapter in their city. Nine times out of 10 the answer to my question to them of why they want to start it in their city is because they want to create a space for everyone who considers themselves creative to come together and meet each other and get inspired and form community, and that’s the piece that’s missing from the city they currently live in. They always talk about the way the design and creative community in their city is siloed by design discipline. It’s incredible to me to see this answer so often, and because I’m hearing it from creatives worldwide there’s obviously a need.

I think about a lot of factors that contribute to this particular need for a common space. Part of it has to do with the fact that more and more people, especially designers, are hybrids – they’re not just a graphic designer or an industrial designer or an architect, they’re a combination. I think you can have a multitude of skill sets and be creative in lots of different ways so why limit that to just one discipline and just attend your AIGA or AIA event when you can come to CreativeMornings and meet a bunch of different creatives who are skilled in all kinds of disciplines and industries and then get inspired by someone who might be talking about something totally random and that might in turn inspire your work somehow? Because at the end of the day the creative process is the same no matter what discipline you’re practicing. So even though CreativeMornings started out with a graphic design and UX-focused community, it’s really branching out because people want to feel like they belong to something because they consider themselves creative, whatever that means to them, and they don’t want to be limited by one discipline; they want an open door. And that’s kind of a beautiful thing. 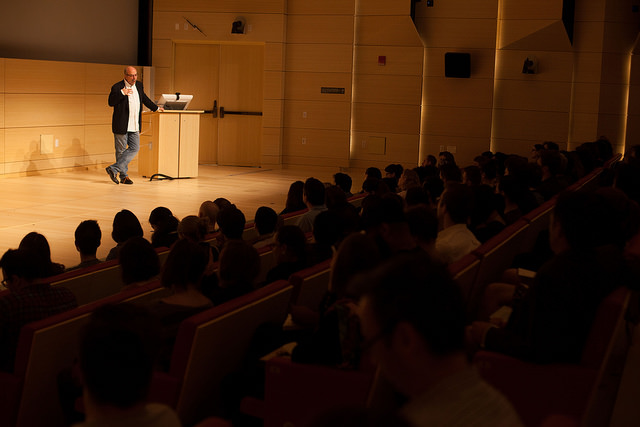 David Kelley speaking at a CreativeMornings event at the New School

RG: All of these creatives around the world who host these events have almost become design diplomats of sorts, both within their own community and across other chapters elsewhere.

TRE: I totally feel like CreativeMornings volunteers and especially the hosts are our ambassadors to their communities and of this larger mission that everyone is creative and the importance of creativity in a well-lived life. I always am amazed when we get the application videos from prospective hosts around the world because they are such a love letter to their city.

It always makes me feel like I need to call up their mayor and tell them to check these people out and what they’re doing for their city. It’s really impressive that we’ve managed to have such an interesting group of creatives and designers around the world working on this— entrepreneurial, creative, smart people that value human connection over money. Just finding all these people that are not just traditionally business minded but are driven to represent their city and that see such importance in community and creativity is so cool.

I feel like the CreativeMornings tribe gives me a lot of hope that the world will at some point be a peaceful place. It sounds cheesy. This is the first time ever in my life that I believe there could be world peace if we just keep spreading that trust and kindness and inclusivity that I feel is happening within CreativeMornings.

SR: I would also say there’s a lot of inter-city travel between chapters and that makes me so happy because why not travel to another city where you know the host in that city is having a similar experience to you by virtue of being a part of this CreativeMornings community to get together, compare notes, and learn from each other in person? 200 creatives from 30 countries around the world came to Brooklyn last Fall for our first summit to do just that. I don’t think anything beats that. Our former COO Kevin just completed three months of traveling around the world staying with designers and creatives in places from South Africa to Peru to Sydney to Prague entirely through this network we’ve developed.

And in terms of being creative ambassadors for their own communities, I think, from my research interviewing prospective hosts I’ve learned from many of them that there’s a recognition that comes with being a host in some cities that they didn’t anticipate. They get recognized on the street, they meet people they never thought they’d meet, they have access to people and information and resources and incredible venues around the city that they never thought that they would have. It’s all the beautiful, unexpected things that come with building a community. Just when you think you know and that you have a handle on it, there’s always this element of surprise.