Wetland Restoration: A New Driver for Development in China?

Instead of draining a wetland to help build a city, AECOM is filling and restoring one.

The bird viewing corridor is designed to blend into its surroundings, and to reduce impact of pedestrian traffic on bird habitat and activity.

In China, when it’s time to build a new city—and it’s always time to build a new city in China—there’s usually a clear loser to be pitied: the landscape that gets leveled and paved over. At the moment, the Chinese government is trying to direct the greatest urban migration in human history: 250 million rural migrants in the next decade or so alone. Toward that end, the world’s most populous nation used more concrete in three years than the Unites States did in the 20th century, much of it to eradicate coastal wetlands. (The World Wildlife Fund estimates that in the last 40 years, half of China’s coastal wetlands have been claimed by development.)

Too often we assume that grayscape infrastructural investments must come at the expense of idle wilderness, as a necessary stage of evolution for any developing nation. But at Weishan Wetland park, the preservation of native ecology is considered a critical economic development strategy.

Weishan Wetland Park in the northern China province of Shandong will support the development of the 50,000-person “New Southern Town,” to be built just beyond its northern border. Instead of draining a wetland to help build a city, the park’s designers at AECOM are filling and restoring one.

Completed in 2013, the $42 million park is 15 square miles, and situated in the largest lake wetland area in Asia. Working with the local government, AECOM’s mission was to restore degraded wetlands into a landscape that attracts eco-tourists, hosts environmental education, and works as a vast, natural filtering system for the polluted waterways that feed into the site. Drax Xiong, AECOM senior ecological planner, says this increased environmental awareness came from “the government and other developers’ understanding of the benefits from building a better environment, which will also raise the land value.” Indeed, since the park opened, neighboring urban areas have seen property values increase by 400 percent, according to AECOM.

Weishan Wetland Park is meant to be both an accessible amenity, giving the public access to pristine wetlands’ flora and fauna, and a carefully managed barrier, cleaning water and filtering pollutants that flow in from urbanized areas to the north before they can enter Weishan Lake at the southern end of the park. “By maintaining the existing wetland functions, improving entertainment and service facilities, and providing wetland science education and eco-tourism, we support the development of the city,” says Lian Tao, AECOM project director. “This is a holistic approach we adopted to enable nature and human settlements to thrive.” 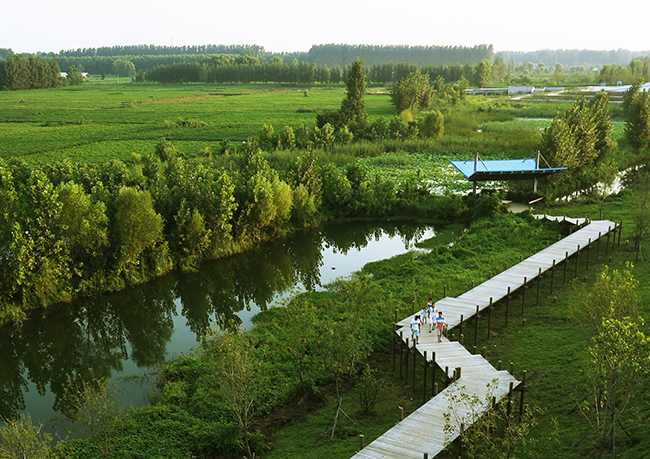 By increasing the types of local flora and fauna, the site is restored into a robust diverse landscape suitable for outdoor science education.

The park has come online as China is taking a wider look at how it develops water infrastructure. As CityLab reported in November, the government has proposed building 16 “sponge cities” that will use porous, green landscape features that absorb, clean, and drain water without relying on inflexible concrete solutions.

Most of the pollution that damaged the wetlands came from fertilizer and pesticide run-off used in agriculture. A full suite of bioswales, rain gardens, and treatment wetlands work at removing phosphorus and ammonia from the soil. Riverbanks are protected from erosion by willow branches wrapped around timber piles in a revetment fence. Given time, they’ll grow and sprout, locking barriers in place. AECOM’s project contains more than a half-dozen landscape types (poplar groves, lily-filled wetlands, reed marshes), all native to the site. The park now balances expansive horizons of orderly, tilled agricultural fields with wild, naturalistic experiences of nature, as if visitors are welcomed up to the edge of civilization and invited to cross back and forth. Grey herons and egrets flit about lotus flowers, cattails, pampas grass, and Japanese buttercups.

One of AECOM’s main design challenges was finding a way to get visitors into the park’s wet, marshy landscapes with dry socks while still protecting the sensitive ecosystem. There’s a network of electric car paths, but where solid ground is absent, locally-sourced wooden boardwalks slice through the wetlands. Angular and sharp, they let tourists hover over the undisturbed landscape. (The design won a 2015 ASLA Professional Award.)

These pedestrian paths, placed on rails that take you into, but not among, the park’s most dramatic moments, also express something of the ambiguous relationship between the modern Chinese eco-tourist and the primeval rural landscapes that are being urbanized out of existence. It’s a prescribed and voyeuristic way to experience nature, and this sense of voyeurism extends to the park’s neighbors as well—part of the wetlands project included restoring some of the agricultural fields within the park, and tourists are encouraged to “see how farmers use centuries-old methods” to grow their crops, says Tao. Eco-tourist voyeurism seems educational and progressive when you’re Instagramming ducklings navigating their way through a pond of water lilies, but when the theme park ride stops to gawk at people earning a living, their way of life gets uncomfortably fetishized. Something like Iowa’s kitschy but celebrated Living History Farms, sans historical re-enactors. Are these traditional farmers interesting because they’re more adept at working within the constraints of the wetland’s ecosystem, or because their way of life is now an obsolete museum showcase?

China’s historically rapid dislocation from its agrarian past means that any contact between urban and rural dwellers (even if it’s superficial) is better than socio-cultural apartheid. It’s fantastic that AECOM and the Chinese government are finding ways to get urban dwellers into curated natural landscapes. But the best solutions for China’s urbanizing future might do the opposite of this. Instead of bringing tourists into the countryside, they’ll let ecological awareness of the natural cycles happening in the marshes seep into New Southern Town (and other cities) like Weishan Wetlands water through the reeds. 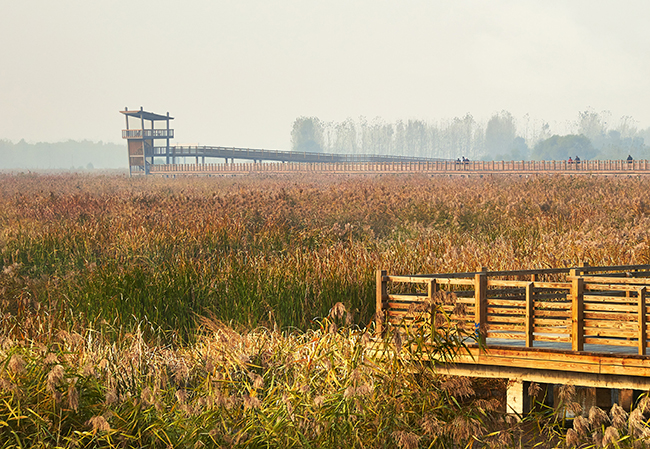 A network of timber boardwalks and viewing platforms weaves across the site, providing ample opportunities for diverse landscape experiences through reed beds and poplar groves. 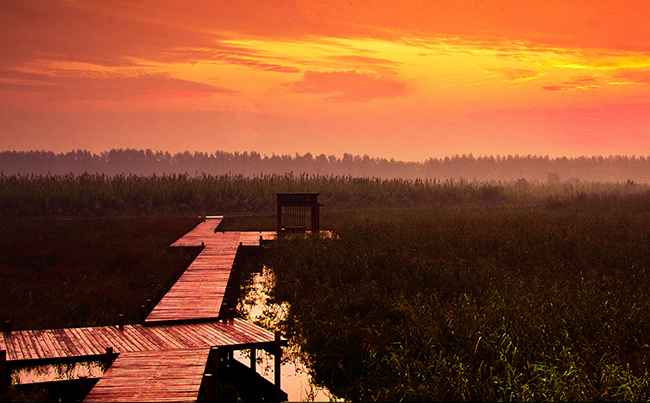 The timber decks are constructed out of locally sourced materials, as part of the project’s low-impact design strategy. 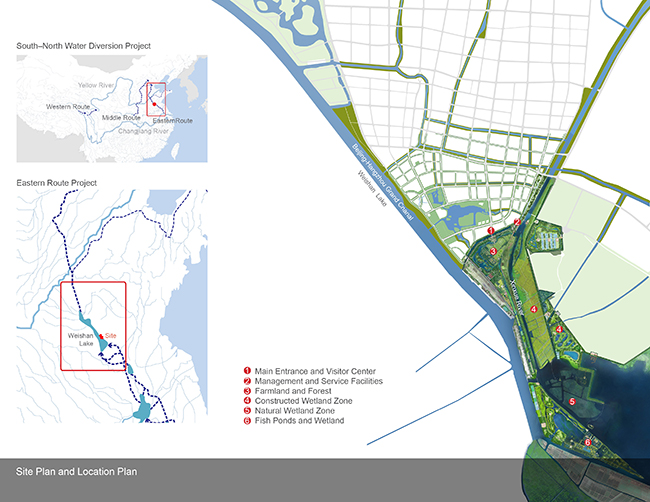