Will 2017 Be Mexico City’s Watershed Moment?

The CoRE Urban Forum brought international experts and local actors together to catalyze change in this pivotal moment in the city’s history.

Mexico City is by and large a 20th-century city. Despite its founding by Aztecs in 1326, the majority of the city’s expansion occurred in the 80-year span after 1905. In 1985, a massive earthquake put the city in crisis; people, and resources, left the city in droves, setting off decades of disinvestment. But in the last five years, people, and resources, have started to return. The potential repopulation of Mexico City’s core is a tremendous opportunity for the city—it could jump start a new wave of dense, sustainable, and livable development.

This potential was the central focus of the CoRE Urban Forum, which took place in the capital earlier this month. Bringing together international experts in urban planning with local developers, politicians, and activists, the forum focused on the revitalization of one particular area surrounding the Paseo de la Reforma, the city’s largest and most developed commercial boulevard. The event did an excellent job of bringing public and private stakeholders together, as well as outlining the challenges and opportunities facing the city in terms of mobility, zoning, and public space. However, it did not spend nearly enough time focusing on realistic solutions for ensuring the city center develops equitably—in a way that would not just make it more accessible to young, middle-class Mexicans, but also to lower-class and indigenous Mexicans who have been consistently excluded from the city’s development. 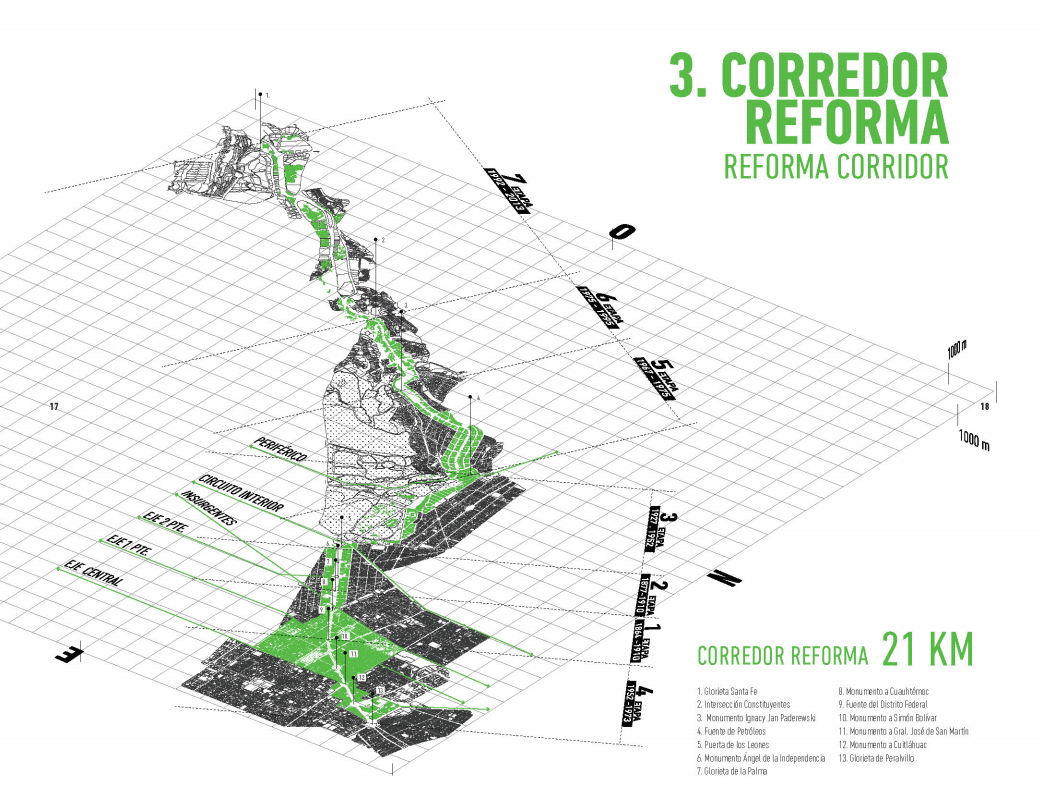 One of Mexico City’s first challenges towards making the city center a more equitable and livable place, as the forum panelists repeatedly pointed out, is solving the car crisis. The urban fabric has been shaped for cars, not people, and is today bearing the consequences of that Modernist dream. Despite an extensive public transportation system used by 72% of the population, cars put the city in a stranglehold every single day. There is some hope for change (a recent study by the Gehl Institute reports a high use of bicycles from a diverse swath of users, despite the lack of biking infrastructure), but the city has essentially incentivized private transportation, even revoking a car tax two years ago. It has also failed to connect public transportation systems, contributing to their inaccessibility and inefficiency.

To meet this challenge, Michael Kodransky, global research manager for the Institute for Transportation & Development Policy, argued for a shift away from the “paradigm of a minimum model” to that of “a maximum model.” In other words, rather than requiring a minimum number of parking spaces, the city must begin mandating a maximum number of parking spaces allowed. “If density is going up you have a potential ridership for public transport,” Kodransky explained. “A city is a solution to a transport problem. Parking minimums are not allowing the solution to blossom.” 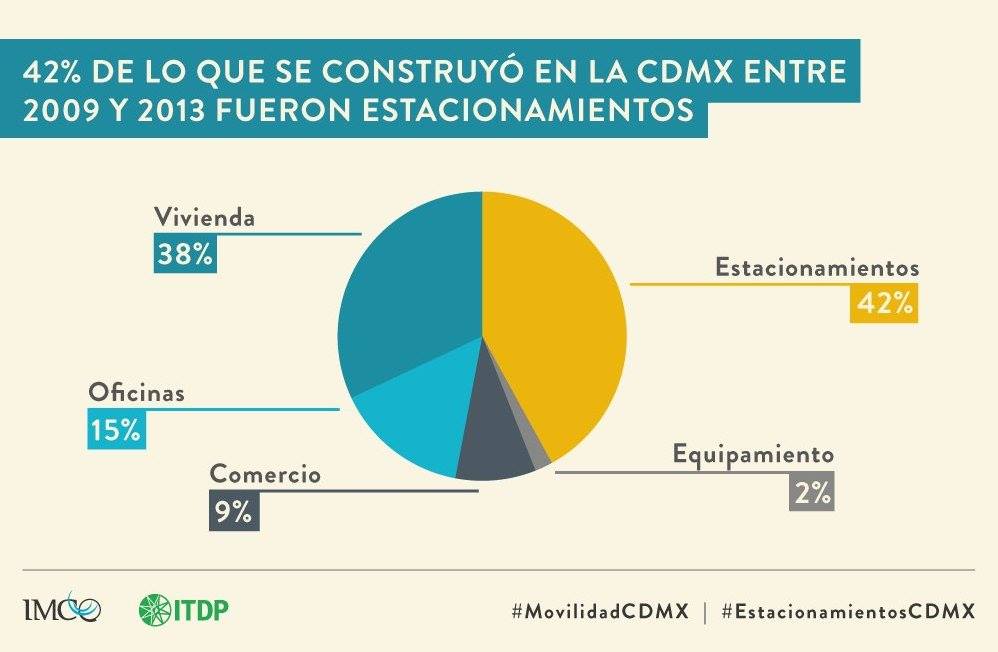 Of course, the major reason that Mexico City’s streets are inundated with cars are the 15–16 million people who commute hours into the city each day. If the city is successful in its plans to draw people back to the center, inhabitants could walk or bike to work—a game-changing idea.

The city center has considerable amounts of abandoned building stock that could quite easily be converted into housing, and indeed, this is already beginning to happen. However, development in Mexico City has been notoriously uneven and inequitable. As Gehl Architects’ associate director Camilla Richter-Friis van Deurs noted in her presentation, Mexico City’s developers have treated sites as isolated, revenue-generating lots, rather than as parts of a greater urban tissue. The result has been housing projects (mostly for the middle or upper classes) with windowless facades; they prioritize security and privacy, but turn their backs on the city. As Richter-Friis van Deurs put it, the central question facing the city is “How do we make the core ‘sticky’—a place where people want to stay and engage?”

According to Mexican architect Tatiana Bilbao, mixed-use buildings interspersed with human-scale public spaces will be key to attracting younger citizens, who will hopefully plant roots in the city. “There are few people living in the city center today, but that’s going to change. Public space is activated by people who live around it. It’s an extension of domestic space—and it should be. It’s vital for the city to think of the human scale.”

Enrique Martin Moreno, architect and co-organizer of the forum, pushed this concept even further: “The challenge is to repopulate the city with a new population of younger citizens that favor mixed-use, mixed-income, highly-dense neighborhoods with short commutes, providing amenities and family-friendly public spaces where they can build communities and exchange ideas.”

But herein lies a danger. Until now, displacement has been less of an issue in Mexico City than in other cities. After all, 80% of people own their own homes in Mexico City. Nevertheless, the forces of gentrification could easily push vulnerable long-term residents out as prices rise. Walk around the streets of “cool” up-and-coming neighborhoods such as La Condesa and Roma, and you’ll see large posters declaring “Desarollo sí! Desalojo no!” (Development, yes. Displacement, no.)

Mexico City should ensure its city center develops with bike lanes and public spaces and mixed-use buildings. But if it focuses too much on attracting upper- or middle-class younger citizens, who appreciate (but don’t require) mixed-income housing, the city could easily fall into old traps. The focus, and indeed what should have been the focus of the forum as well, should be on mandating that these neighborhoods develop in such a way that low-income residents can stay—and reap the benefits. 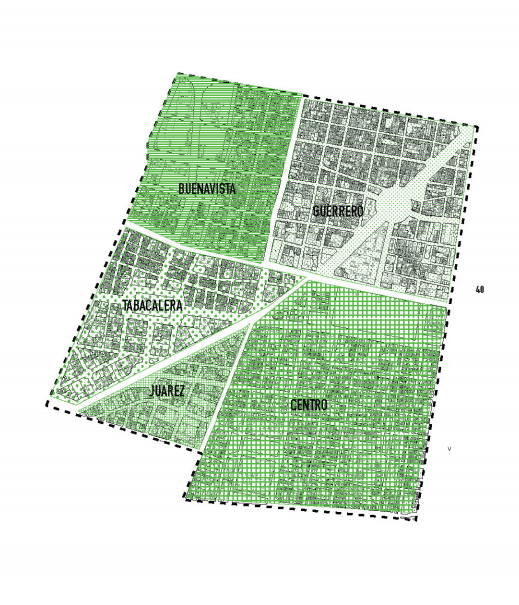 The Core Urban Forum focused on this area, including parts of five separate neighborhoods, in Mexico City’s “core.” 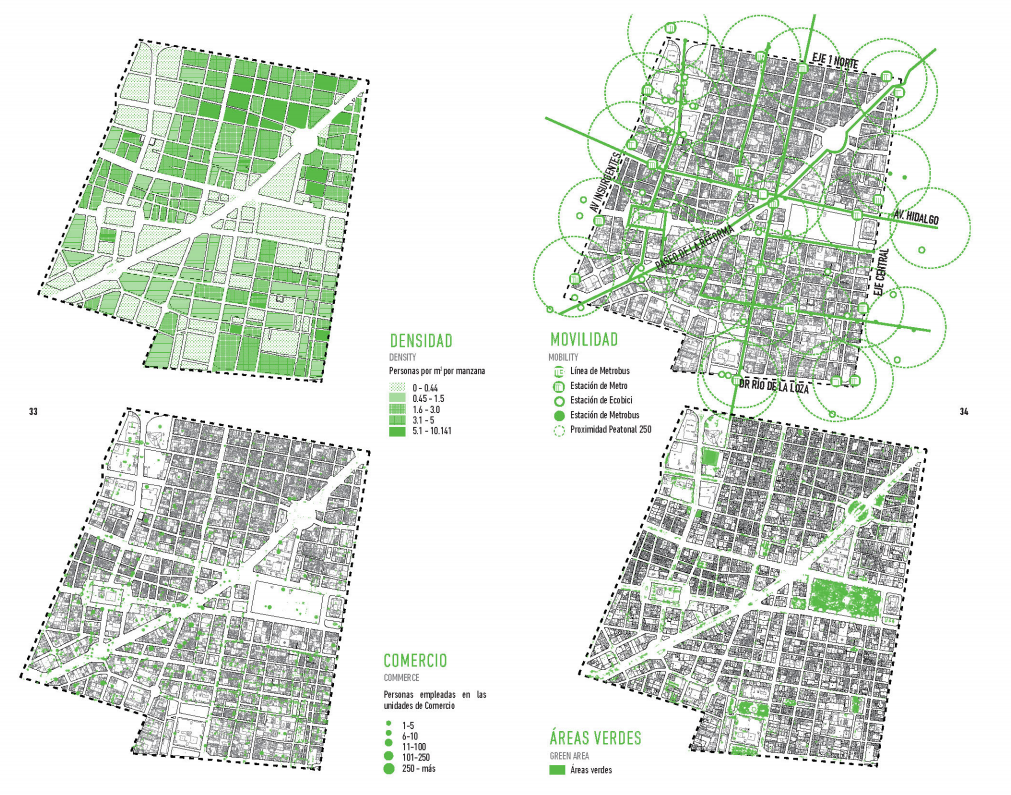 This diagram shows the density, commercial spaces, transportation, and green spaces in the area.