Social housing is threatened with demolition nearly everywhere it exists. Two architects have pioneered a strategy for saving these important public assets and the communities that live in them. 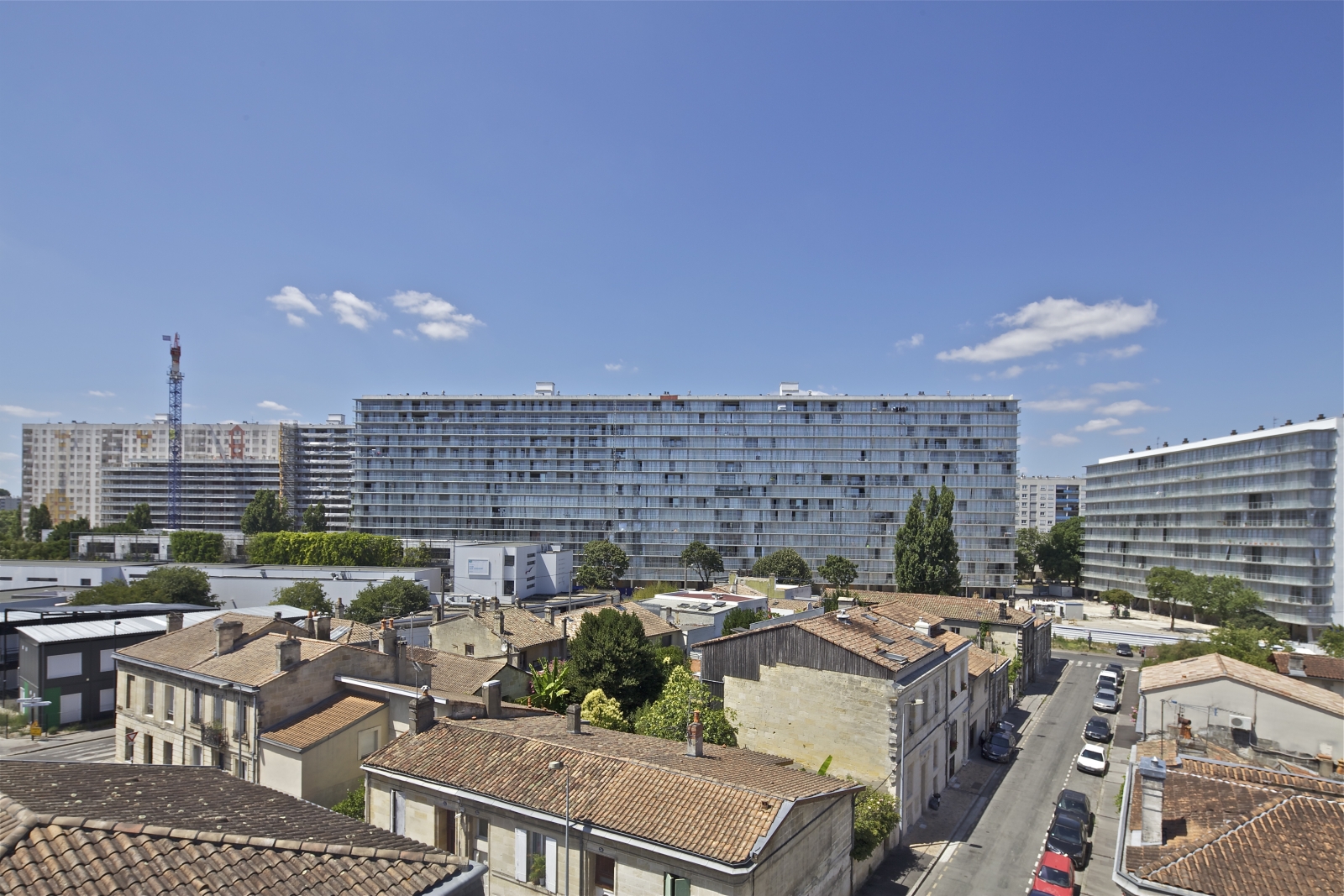 Though many lessons remain from architects Anne Lacaton and Jean-Philippe Vassal’s first project—a modest straw-mat house constructed on a sand dune along the Niger River in 1984—the structure itself does not. As they wrote, “Searching for and deciding upon the site took six months, the building work two days. The wind took two years to destroy it.”

Now in charge of a Paris-based firm notable for several significant public buildings and extensions of tall urban housing blocks, Lacaton and Vassal, 60 and 61, respectively, continue to learn from that fragile house in Niger. Only instead of treating uncertainty and environmental contingencies as liabilities, the architects have put observation, open-endedness, and “freedom of use”—as they called it during a Harvard Graduate School of Design lecture last March—at the center of their practice.

In 2004 Lacaton and Vassal, with architect Frédéric Druot, authored PLUS, a study-cum-manifesto that challenged an initiative by the French government to raze a significant part of its long-vilified postwar social housing stock and build new—and, no doubt, smaller—dwellings at great expense. Their alternative approach is encapsulated by an exclamation: “Never demolish, never remove or replace, always add, transform, and reuse!” And over the past five years, Druot, Lacaton, and Vassal have had the chance to test their conjectures in reality, transforming Modernist housing in Paris, Saint-Nazaire, and Bordeaux. At each site, cramped and dim apartments have been opened up to light, air, and previously unimagined uses through interventions that exploit the buildings’ height and the potential of their interior spaces: new elevators, improved plumbing, and inhabitable glass facades that capitalize on views. The architects understood that to stand a chance against the winds of fickle consumerism and ideological whitewashing, this cultural heritage had to be true to its modernity; it had to evolve.

Lacaton and Vassal met as students during the late 1970s, and though their career roughly tracks the rise of Postmodernism in architecture, the pair has rejected that movement’s essential claim: Modernism’s termination. While they make work that is unreservedly critical, they’ve mostly shunned the rituals of their profession’s heady set. Through buildings more so than books, they have advanced a set of ideas, a theory of architecture not divorced from use and inhabitation, from life. They don’t rattle off the names of de rigueur philosophers or prattle on about “the future of architecture.” They haven’t done a TED Talk. And yet their work is more urgent than that of most of their peers, since they are advocating for buildings that would otherwise be demolished. 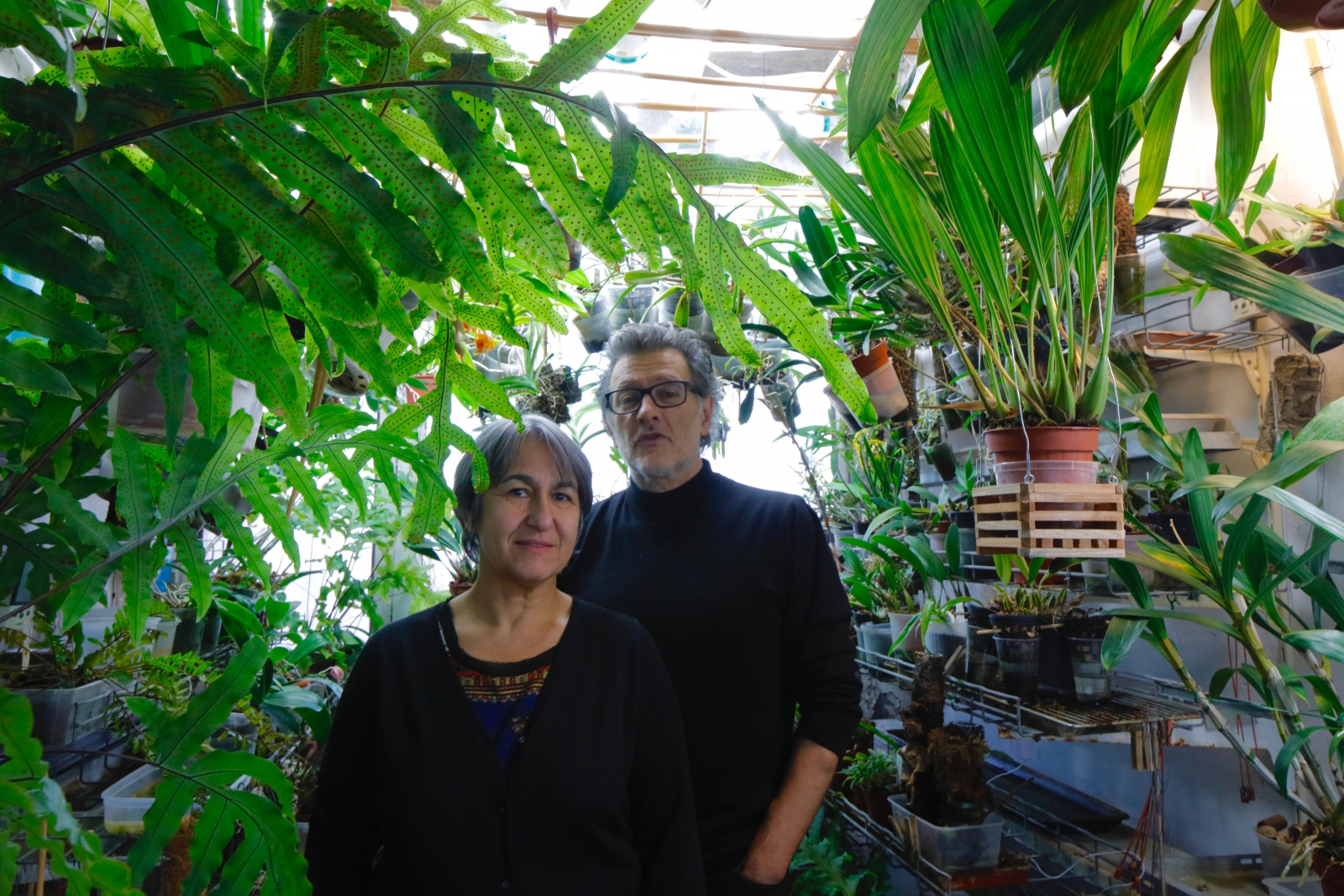 Lacaton and Vassal’s transformation method, which they and their collaborators Frédéric Druot and Christophe Hutin have undertaken previously in Paris and Saint-Nazaire, revitalizes languishing public housing blocks without decanting their inhabitants.

The architects have called the French capital home since 1999, the year they were commissioned to install a temporary contemporary arts center within a monumental remnant of the 1937 World’s Fair (due in part to their successful “soft” renovation, the Palais de Tokyo is now a permanent institution). Prior to that, for more than a decade they maintained their office in Bordeaux, designing small homes, a public square, and several unsuccessful competition entries. They took walks, too, and on one frequent route developed a curiosity about the horticultural vernacular. “We were really interested in the kind of space that these greenhouses made, a kind of well-being when you are inside,” Lacaton recalled one afternoon last year inside their sixth-floor office, a former industrial space in the 17th arrondissement. “Because the structure is light, you don’t feel the weight of the architecture—you feel free.”

The day before I met up with Lacaton, I visited the new architecture school in Nantes that the firm completed in 2014. Using economical construction techniques and the winter-garden approach they’ve honed over two decades, the architects were able to create nearly twice as much space as the client demanded. Large, double-height spaces remain unprogrammed, enclosed by polycarbonate panels that are free to be moved by students and faculty. When I remarked at how extraordinary the views were, Lacaton fended off my intimation of a compliment: “We didn’t invent the view; the building just had to look at it.”

Beginning in 1993, with a residence they designed for a local Bordeaux family on a tight budget, Lacaton and Vassal started to incorporate adaptable and inexpensive greenhouse construction techniques in many of their projects. The front half of the steel-frame structure contains two levels of conditioned living space (bedrooms, bathrooms, kitchen, and common areas), and the back half a double-height winter garden enclosed by corrugated polycarbonate and outfitted with operable ventilation panels. Plywood bifolds separate Maison Latapie’s two environments, allowing the compact house to transition with the weather and the whims of its occupants. What Niger made the architects sensitive to—climate, site, the life cycles of buildings—they were able to, with the discovery of greenhouses, turn into a staggering kind of interior space, neither inside nor outside, at least as we typically understand those terms.

Today, a 15-minute drive from Maison Latapie, it’s possible to see how indispensable winter gardens have become to Lacaton and Vassal for the past 23 years. Here, within a 150-acre postwar housing complex of some 4,000 apartments known as Grand Parc, their firm is transforming three 1960s housing blocks, in collaboration with Druot and architect Christophe Hutin, with strategies first laid out in PLUS. Along the south facades of the two 16-story buildings and the east and west facades of the 11-story building, freestanding, precast-concrete structures have been erected, extending the floors of 530 apartments by 12.5 feet. One unit at a time, the weathered concrete walls encasing puny punched windows are being sawed away. Within the new floor-to-ceiling openings, sliding glass doors are fitted, permitting access to private winter gardens and a shallow balcony separated by reflective thermal curtains and sliding polycarbonate panels. Elsewhere in the buildings, new elevators have been installed and mechanical systems and bathrooms have been updated. Before work concludes early this spring, ground-level entranceways will be improved.

In financial terms, the renovations cost roughly half as much as building new apartments (about €65,000 per unit). But there are other kinds of benefits to this evolutionary model. Residents are not displaced, and their apartments receive more expansive views— some of the best in Bordeaux (a five-floor height restriction is imposed on new construction). And the winter gardens, which improve the buildings’ thermal performance, redefine the existing living spaces by creating connections between rooms and helping regulate their temperature. They add a question mark, too: The inhabitants of each apartment must ask, “What exactly should I use this space for?” Photographs by Philippe Ruault, who has collaborated with Lacaton and Vassal since shooting Maison Latapie, reveal the plurality of responses. Some use the spaces for eating, and others have filled them with lounge chairs and couches. Almost always there are plants, real and fake. Still, it’s hard to say what exactly
these spaces are. 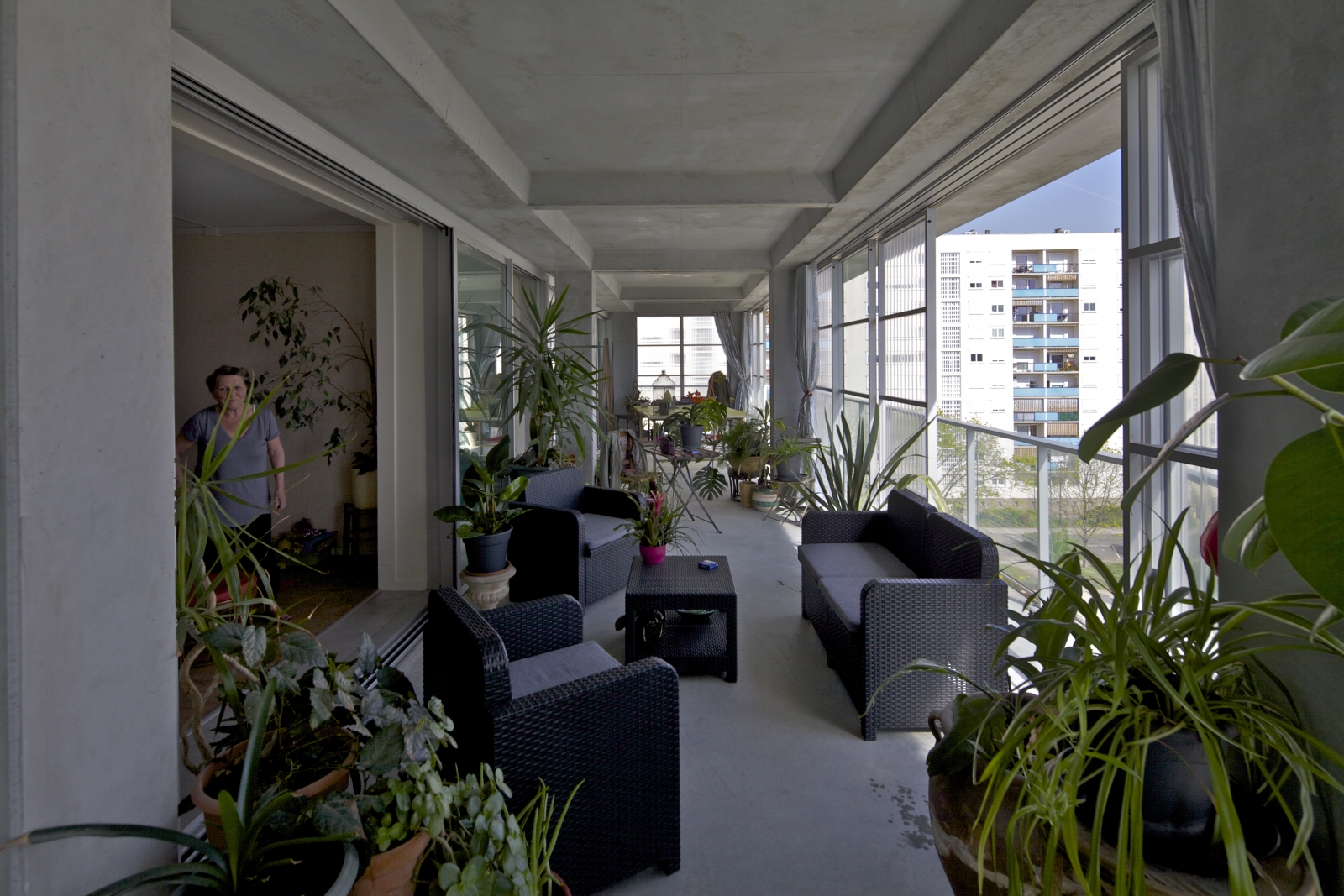 In Bordeaux, Lacaton and Vassal have refurbished 530 apartment units while augmenting the tower blocks with winter gardens, generous balconies, security systems, and new facilities. The project will be completed later this year.

Though significantly larger in scale, Grand Parc builds off Lacaton and Vassal’s 2011 transformation of Tour Bois le Prêtre, a 17-story apartment tower in Paris that earned the architects their first attention in the United States (a New York Times article and a spot in the Museum of Modern Art’s 2010 exhibition Small Scale, Big Change). But Lacaton is especially optimistic about the Bordeaux project. “It really shows the level of interest in transformation as a system,” and not, as too many considered Bois le Prêtre, “just a clever method of renovation.” Lacaton and Vassal’s work is susceptible to misunderstanding. Its departure from conventional expectations of use and comfort—winter gardens, for instance—can seem whimsical, naive. And the deployment of greenhouse materials and unfussy detailing can seem like a willful aesthetic of the cheap.

The mere mention of that last word can turn Lacaton, otherwise relaxed and measured, defensive. (She prefers “inexpensive.”) But that reaction might not be so unreasonable, considering that the redefinition of value and reappropriation of language are critical to Lacaton and Vassal’s practice in general and their approach to housing in particular. “It’s unclear, this question of bringing more luxury into living spaces when you are building public-subsidized housing,” she says, invoking a word most think is exclusive to the wealthy. Defying decision makers—frequently private real estate developers—who consider the low and middle classes to have “enough,” the architects always insist on doing more.

If the pressures of neoliberal austerity can be said to be both economic and psychic, it is prescient that Lacaton and Vassal combine systems thinking and sensitivity, pragmatism and pleasure. Whereas an environmentalist might see the housing transformations as ecologically mindful, a socially engaged activist might view them as more just, or a penny-pinching bureaucrat might call them cost-effective, Lacaton and Vassal are foremost concerned that they make better architecture. Or, more accurately, change the quality of life—a purposefully open-ended phrase that Lacaton explains as a “big amount of little questions.” Such as: How much should a glass door reveal? Can you open that door and put a chair outside? Can you have lunch on your balcony? More and more, Lacaton and Vassal liken what they do to a filmmaker’s work: building a composite out of fragments, creating a frame around actors. “For us,” Lacaton says, “the strengths should not come from the form or the complexity of the architecture, but much more from the capacity the space can produce for life, for relationships.” 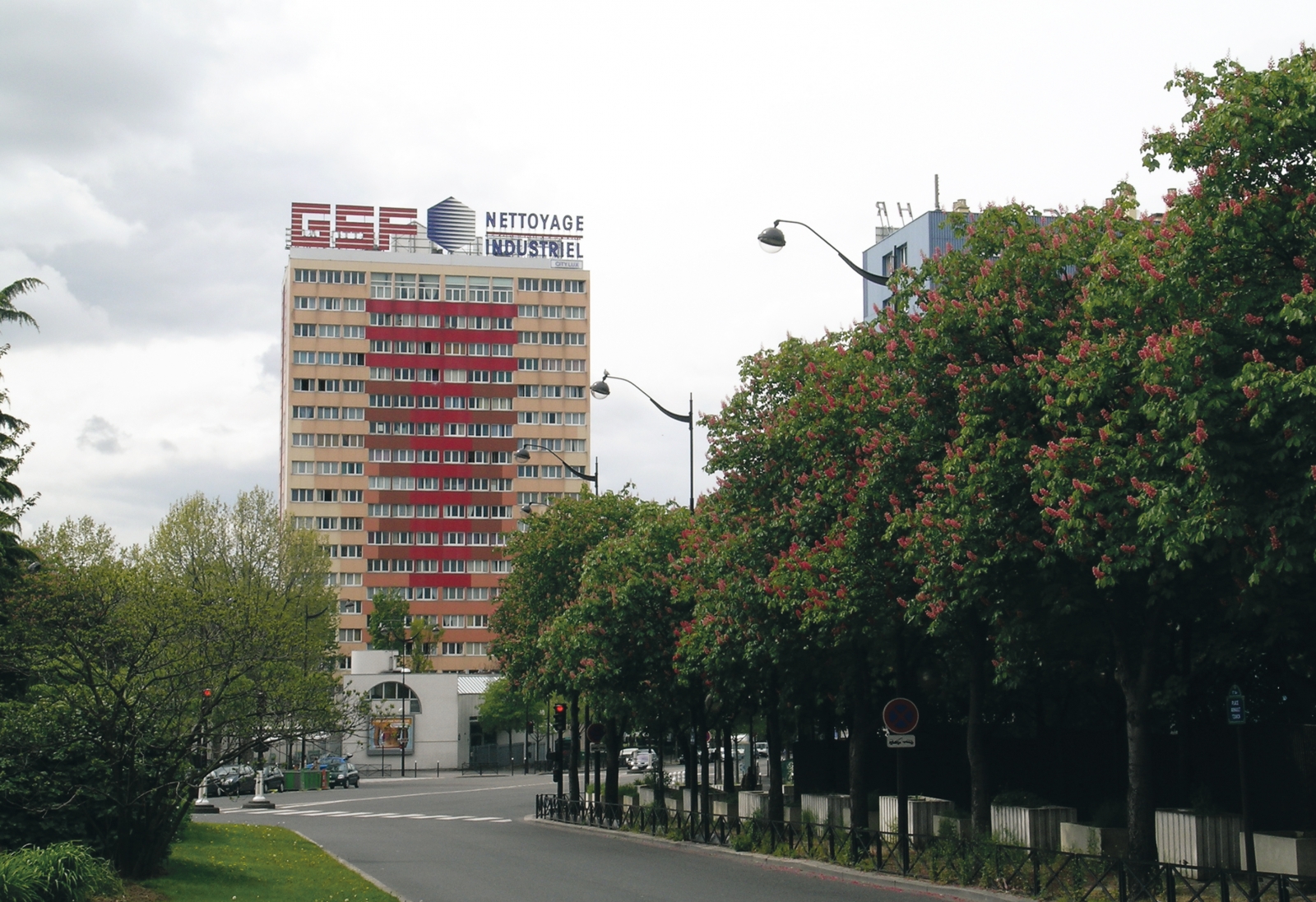 The Tour Bois le Prêtre (2011) was a breakthrough for the architects (above the tower’s “before” condition). 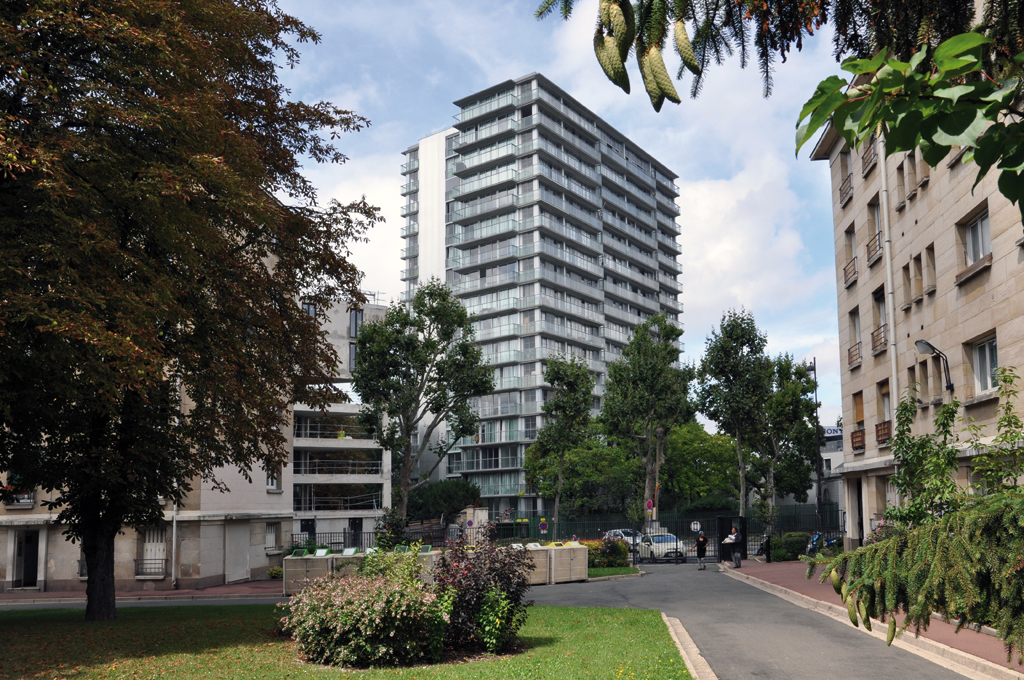 Designed with Frédéric Druot in reaction to a government initiative to demolish many of the housing blocks in Paris’s suburbs, the project was proof of Lacaton and Vassal’s concept, which they had first formulated in the 2004 manifesto PLUS. 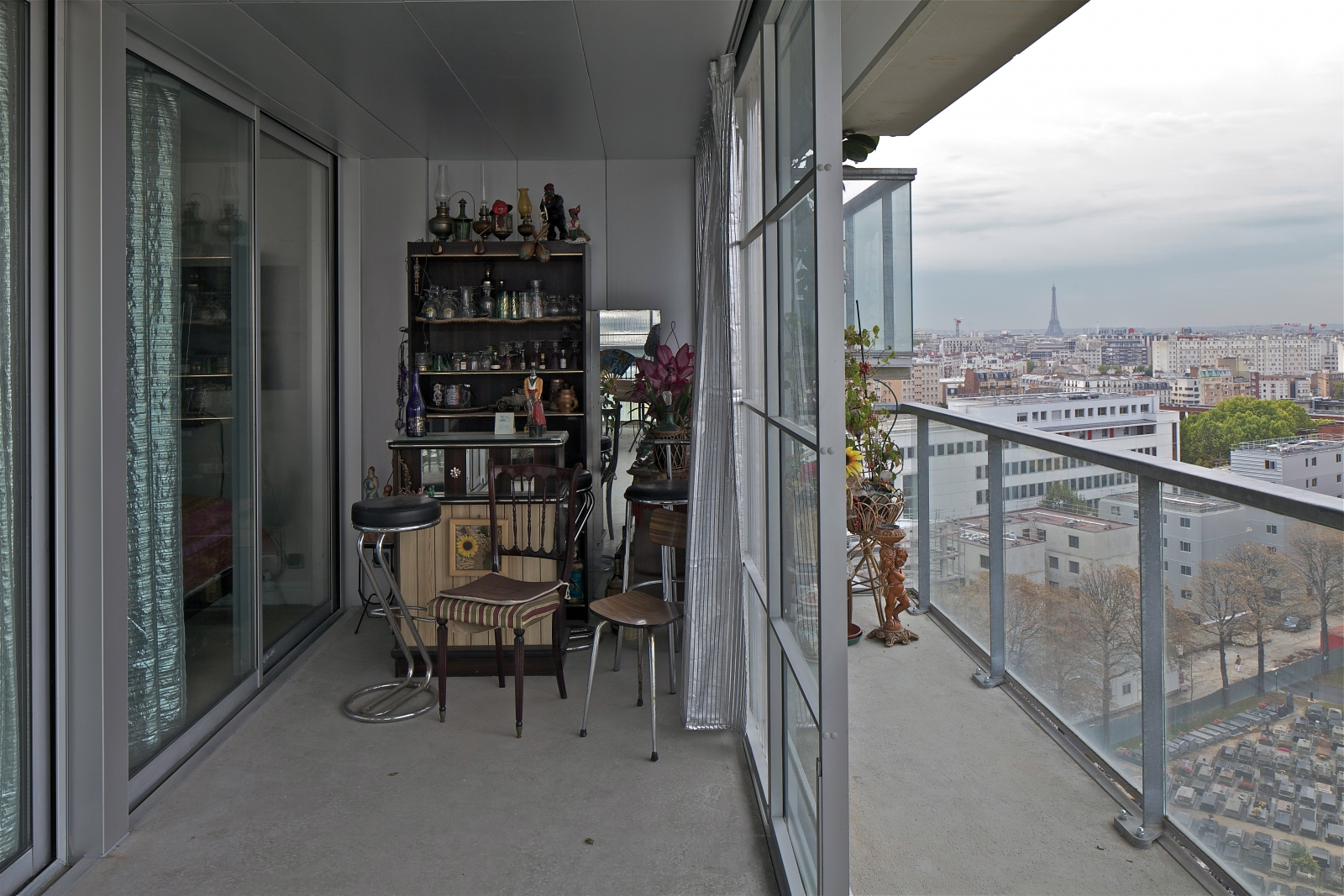 One of the “transformed” apartment units in the Tour Bois le Prêtre. “We worked very seriously on this situation and arrived at the decision to defend these buildings,” Vassal explained at the Harvard lecture. “[We said] instead of demolishing, just add something to them!” 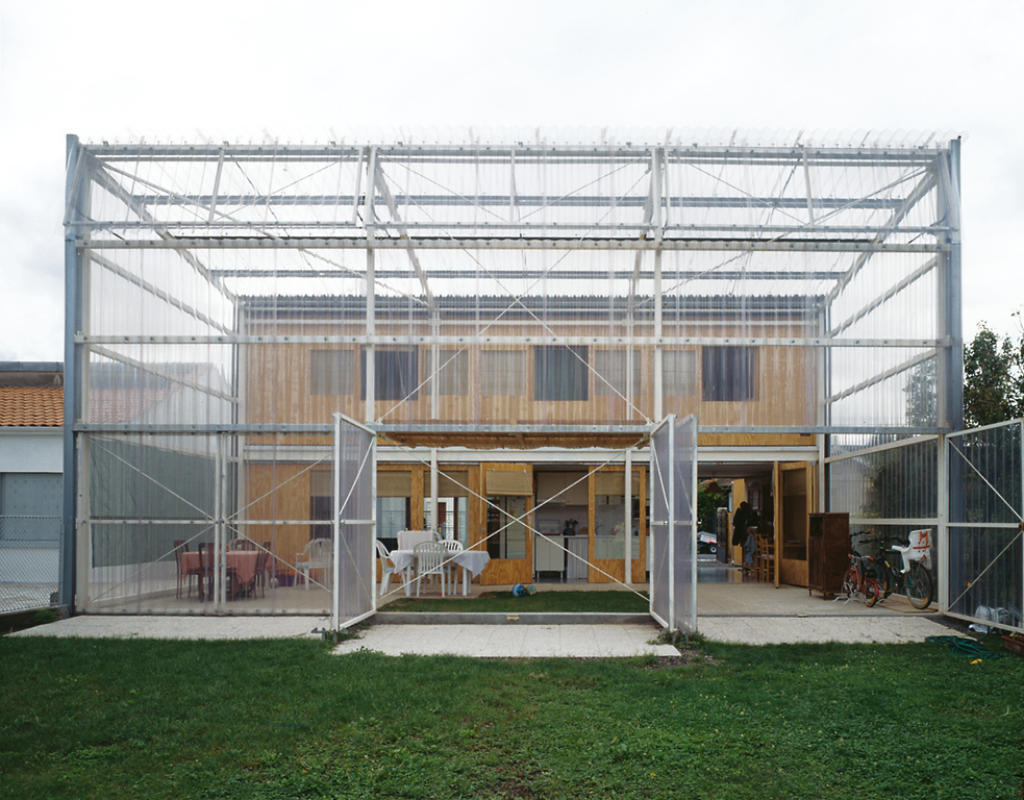 Completed in 1993 and just a 15-minute drive from Grand Parc, Maison Latapie is an exquisite study in using cheap materials such as corrugated metal and plywood. “Cheap is more,” Vassal said in a lecture at the Harvard Graduate School of Design last year. Their goal then and now, he added, is “to use economy in order to do the maximum—to increase freedom and living possibilities for families that don’t necessarily have much money.” 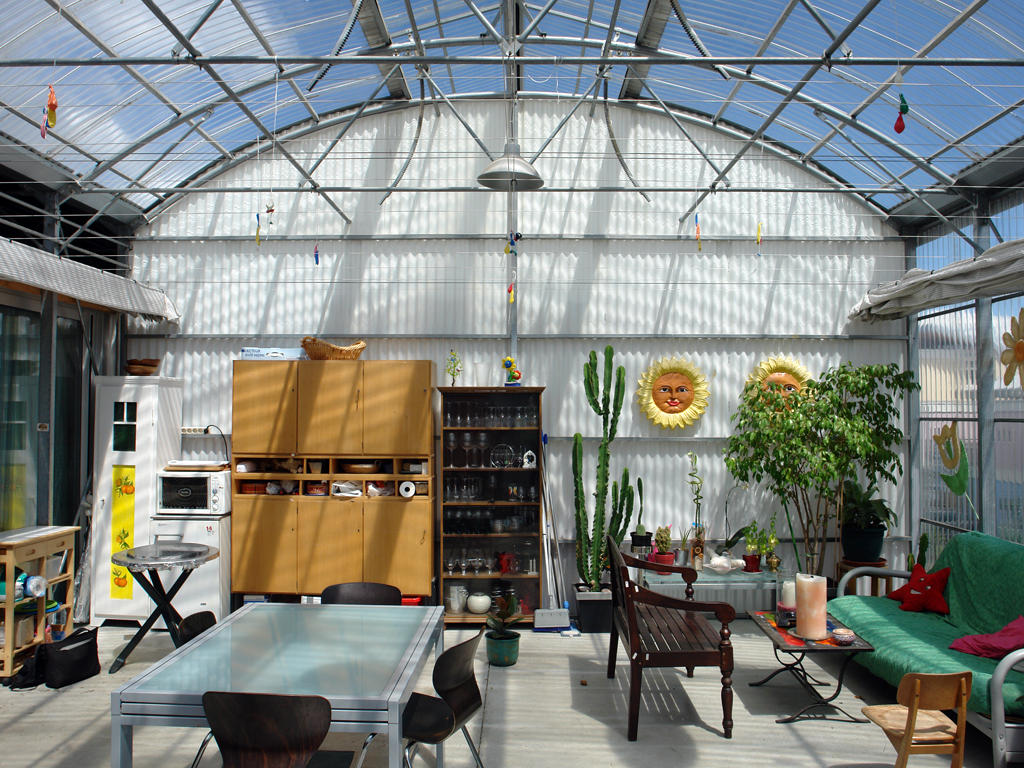 Just as crucially, the house first explored a typology that Lacaton and Vassal had become fascinated by: the greenhouse. This obsession, deployed fragmentally at Maison Latapie, led to the design of the Cité Manifeste in Mulhouse, which was completed in 2005. 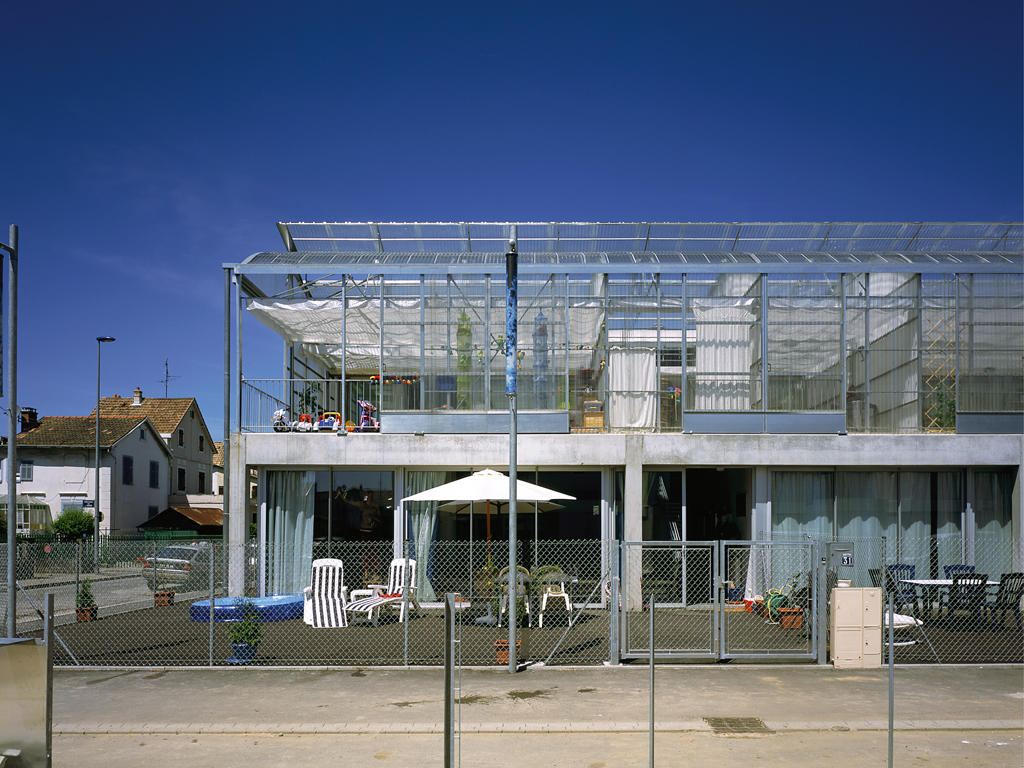 Here, the greenhouse constitutes the main organizing principle of the housing complex.

See the rest of this year’s Game Changers here.