Good design needs relentless advocates. Through their stores, exhibitions, lectures, and mentorship of new talent, the founders of Luminaire have been quiet but forceful patrons for four decades. 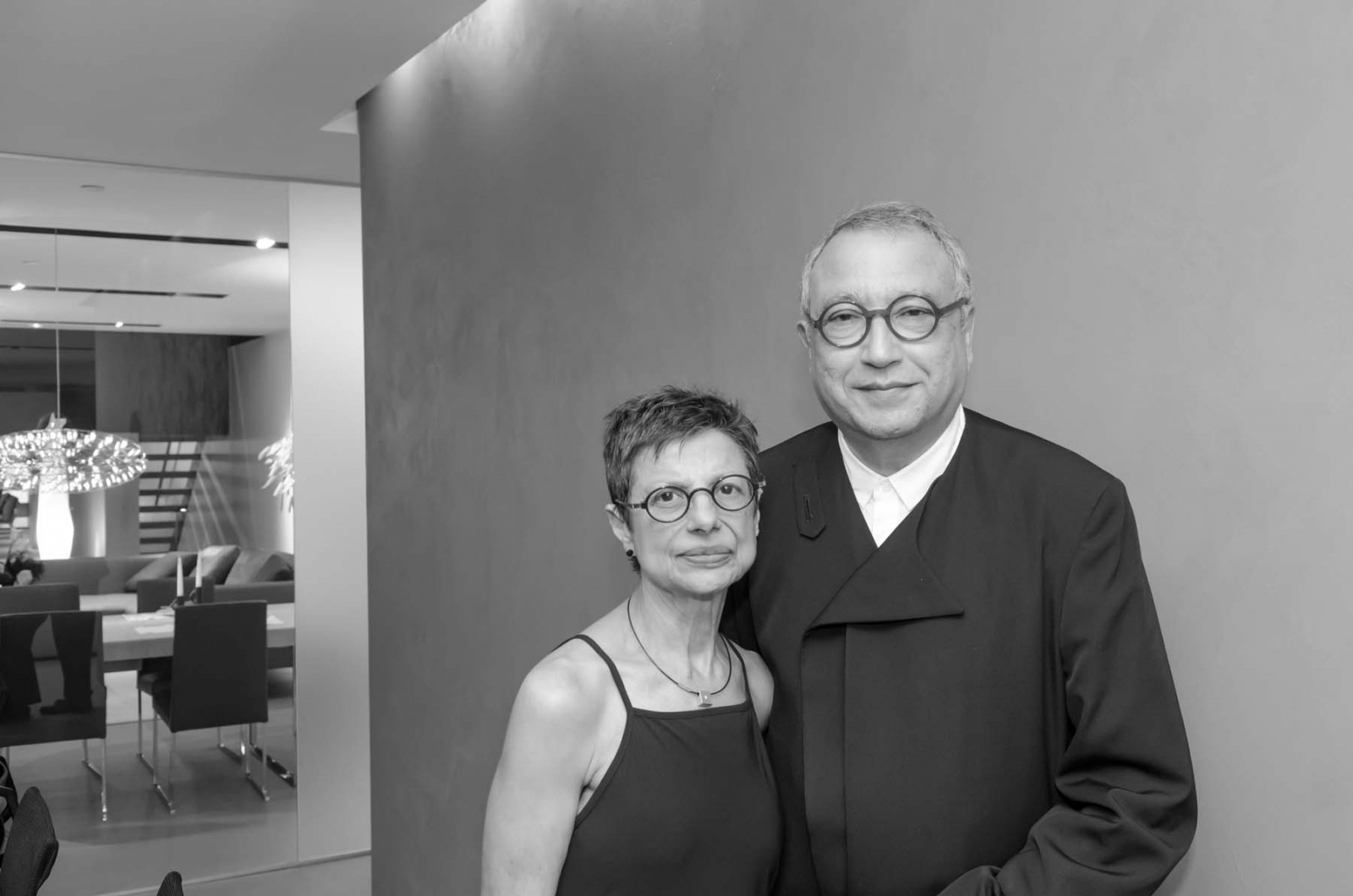 Nasir Kassamali speaks very softly, yet when he talks, it’s clear that you need to listen. For more than 40 years now, he has been an innovator in the showing and selling of design, which he does with a quiet, determined passion—one might say obsession. Luminaire, the retail company that he and his wife, Nargis, founded not long after they moved to Miami, has played a pivotal role disseminating design to Americans, along with South Americans and Europeans, and, really, collectors and consumers all over the world.

Testimony to this abounds: Ask the eternally innovative lighting designer Ingo Maurer about Kassamali, and the response is near-poetry, or at the very least, a bit of elevated prose:“Nasir, when he walks the aisles of an exhibition or when he comes to our showrooms in New York or Munich, is always dressed in black. In spite of all that black, he appears as a light. There is so much light around this guy, and he has illuminated and inspired so many people. His perception of good and bad is remarkably developed.”

Nasir and Nargis Kassamali arrived in Miami in November 1973 with little beyond their dreams and aspirations. Of Indian descent, they had emigrated to Canada from Africa. The two met when they were university students in Kenya, then went off to study in Denmark. “There were no museums in Nairobi,” Nasir recalls. “I’d only seen Jacobsen or other designers in photos, so right after we landed, we ran straight to the museum.” 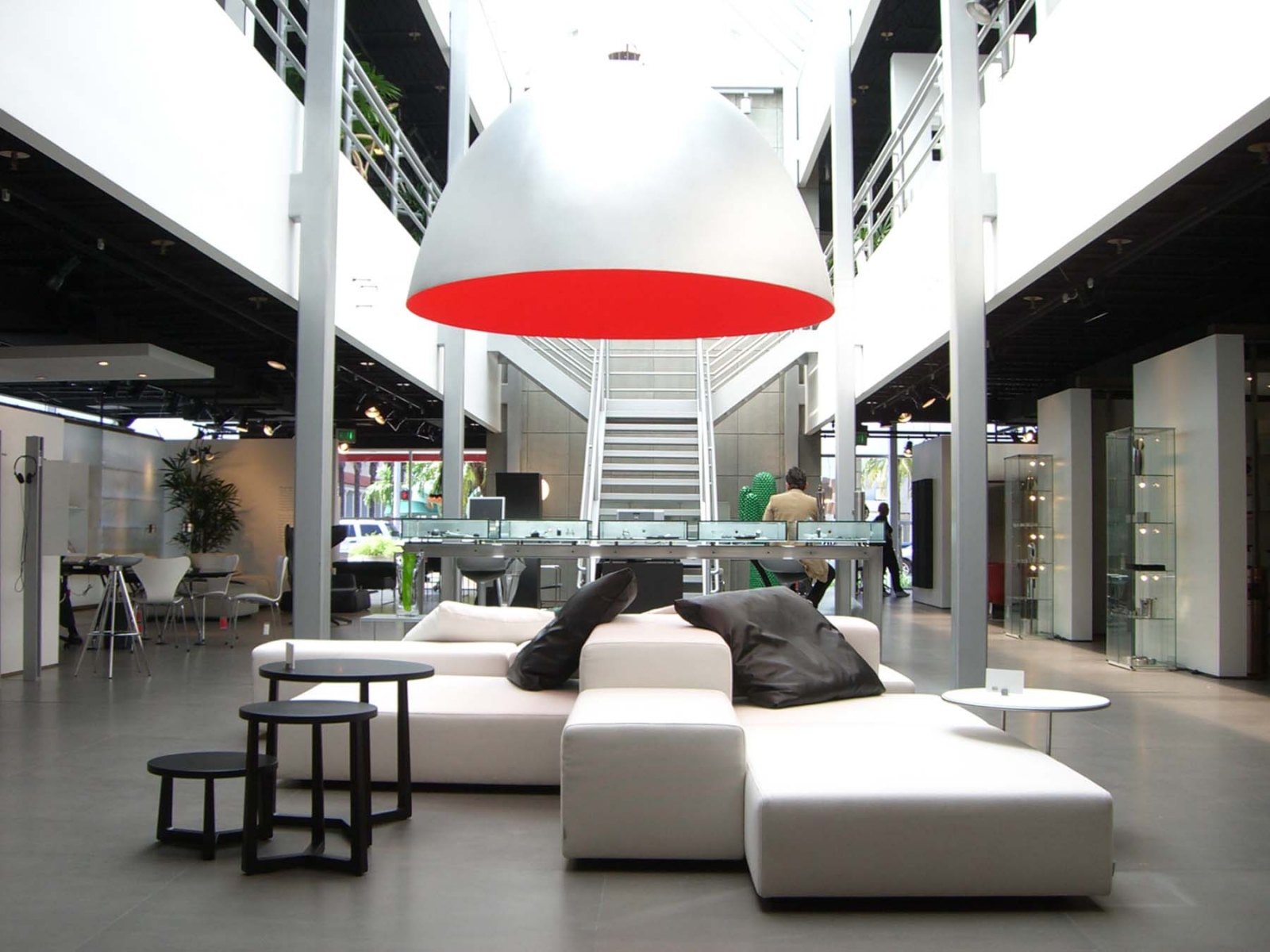 The Luminaire showroom in Coral Gables, Florida, before the recent renovation. An XXL Dome lamp by Ingo Maurer hangs above Piero Lissoni’s Extra Wall sofa for Living Divani. Both designers have a long relationship with the Kassamalis.

Then came travels and marriage, and eventually, Miami. They founded Luminaire—which they initially thought would sell only lighting—with “no credit, and no car,” Nargis recalls. The kiosk at the Mall at 163rd Street was refitted by Nasir with supplies from the local Lindsley Lumber Company. When their first stock arrived at the Port of Miami, they had to rent a truck to pick it up themselves. But they had a purpose, and it carried them. “From the start,” says Nasir, “we were focused on telling stories to the client, telling stories about good design.”

The year 1974 was a time of “green refrigerators, green stoves—avocado green,” Nargis recalls. Despite the lingering influence of Knoll and Herman Miller, good design was somehow considered to be the province of Europeans. It was this misconception that Luminaire took on. “Design is certain principles,” says Nasir, “and they don’t belong to a particular place.”

Initially, business was slow. One day, a customer showed a particular interest in the Ra lamp designed by Piet Hein in 1931. The curious customer was a professor of architecture at the University of Miami, and soon other architects and interior designers began to visit Luminaire, also sending in their clients with plans. The Kassamalis were armed with catalogs, ready to order and expand their business. 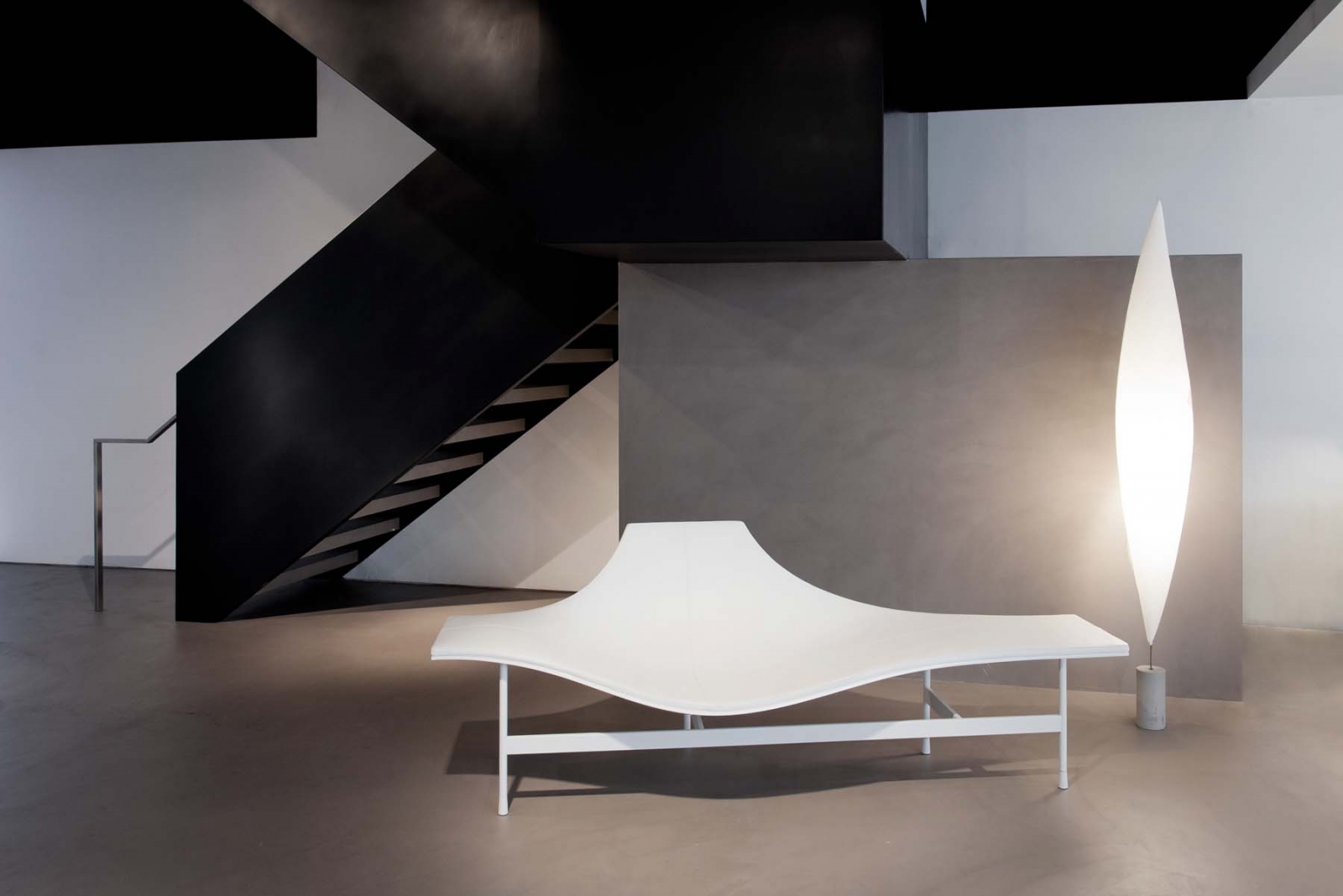 Luminaire marked its 40th anniversary by refurbishing its showroom last December, based on concept sketches by Piero Lissoni. Under the minimal staircase are a WO-TUM-BU 3 lamp by Ingo Maurer, and Jean-Marie Massaud’s Terminal 1 armchair for B&B Italia.

In 1984, Luminaire moved the business southwest to Coral Gables, and the Kassamalis opened two additional stores, both of which closed within the year. They built a family—they have two grown sons, one a physician and the other an entrepreneur— and eventually a house of their own, modern, of course. “We were crazy,” confides Nasir. “Yes, we were crazy,” Nargis agrees, affably.

That same year, a corner building on a prime site in Coral Gables became available, and they bought it, hiring Mateu Rizo Associates to design the building. Five years later, Luminaire opened its first full-fledged showroom, this one in a timber loft building on West Superior Street in Chicago. (“Chicago became my baby,” says Nasir.)

Kassamali is as much an educator as an entrepreneur. He has fiercely pursued good design by instructing and advocating, turning customers into converts. The Miami developer David Martin—who has in recent years commissioned Bjarke Ingels, Rem Koolhaas, and Rene González to design condominium towers—is one such convert. “His passion and discipline for great design permanently changed my life,” Martin says, noting that Kassamali was a mentor who has not only taught him to create environments that enhance people’s lives, but also “to go through an in-depth analysis of behaviors and psychographics to make informed decisions.” 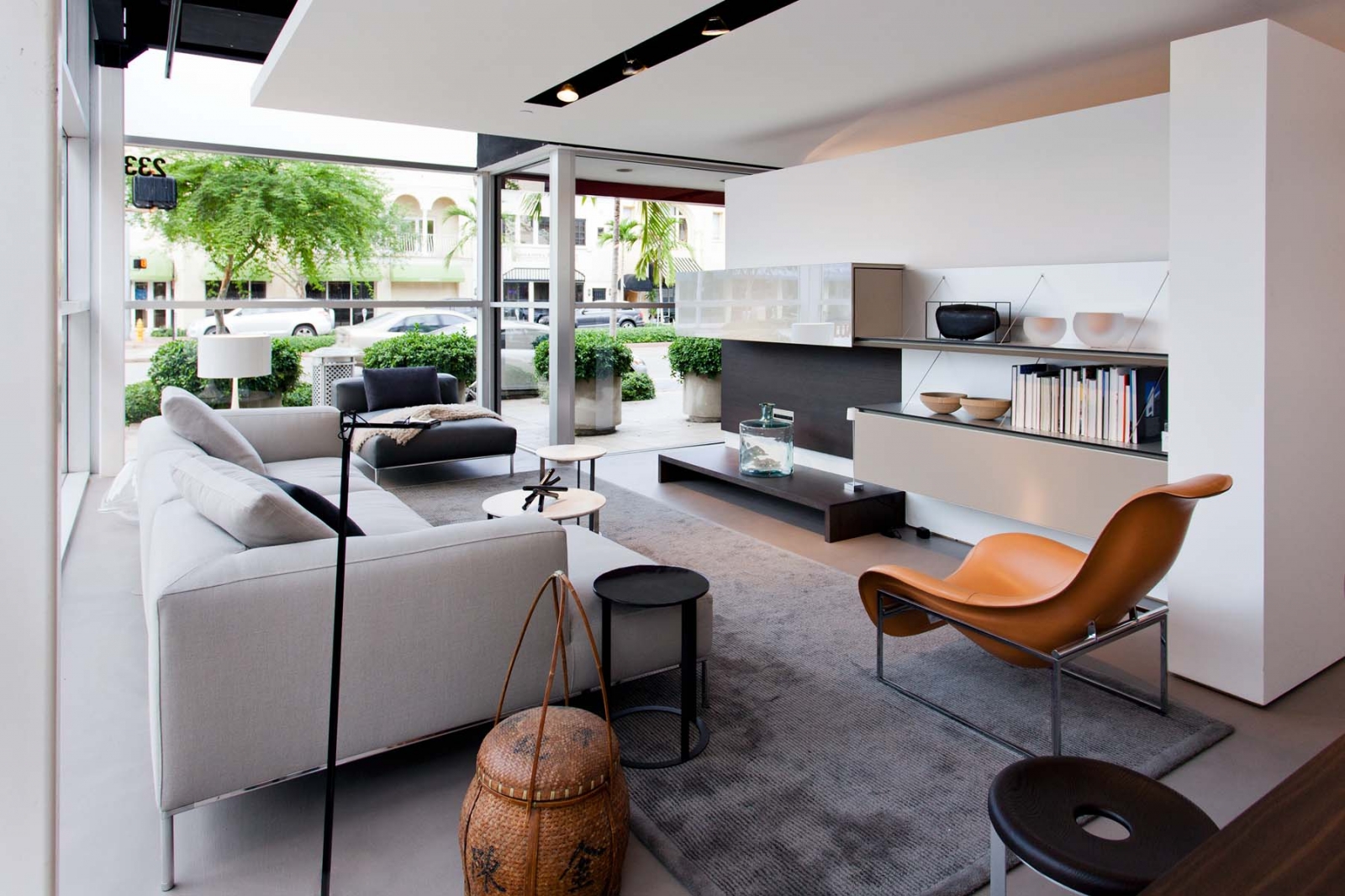 B&B Italia has its own in-shop floor in the newly redesigned Luminaire showroom. The wall unit shown here is Pab, by Studio Kairos. The Mart Relax armchair and Frank side table were designed by Antonio Citterio.

In the early 1980s, when Luminaire was confronted by the fact that most of the then-best-known Italian furniture lines were tied up in exclusive distributor agreements, it turned to Giulio Cappellini, whose products were neither known nor sold in the United States. Among the first pieces sold at Luminaire was Cappellini’s Columbia cabinet system; in 1986, the store introduced the Thinking Man’s Chair by Jasper Morrison.For Cappellini, the Kassamalis are “a reference point for contemporary design in America and around the world.”

It was in that period, Nasir says, that the center of design (and production, really) moved to northern Italy. “My early days in Milan were fruitful,” he recalls. His quest brought him to Fontana Arte, Stilnovo, Artemide, and others. “We were able to curate a collection that was at a very high level, but was not as well-known.” Others followed, and by 1989, Luminaire represented a high quotient of the world’s most important furniture design companies. In 1987, Luminaire was the first U.S. dealer to import B&B Italia, and, last December, it opened a dedicated B&B Italia monobrand space on the first floor of its Coral Gables operation, coming almost full circle from those early days in Milan.

The list of designers who have lectured or shown their work under the auspices of Luminaire—in both Miami and Chicago—is a veritable who’s-who. The Kassamalis introduced Ingo Maurer lighting to an ever-adoring general public; recent showcases have included Naoto Fukasawa, Omar Arbel, and Piero Lissoni. 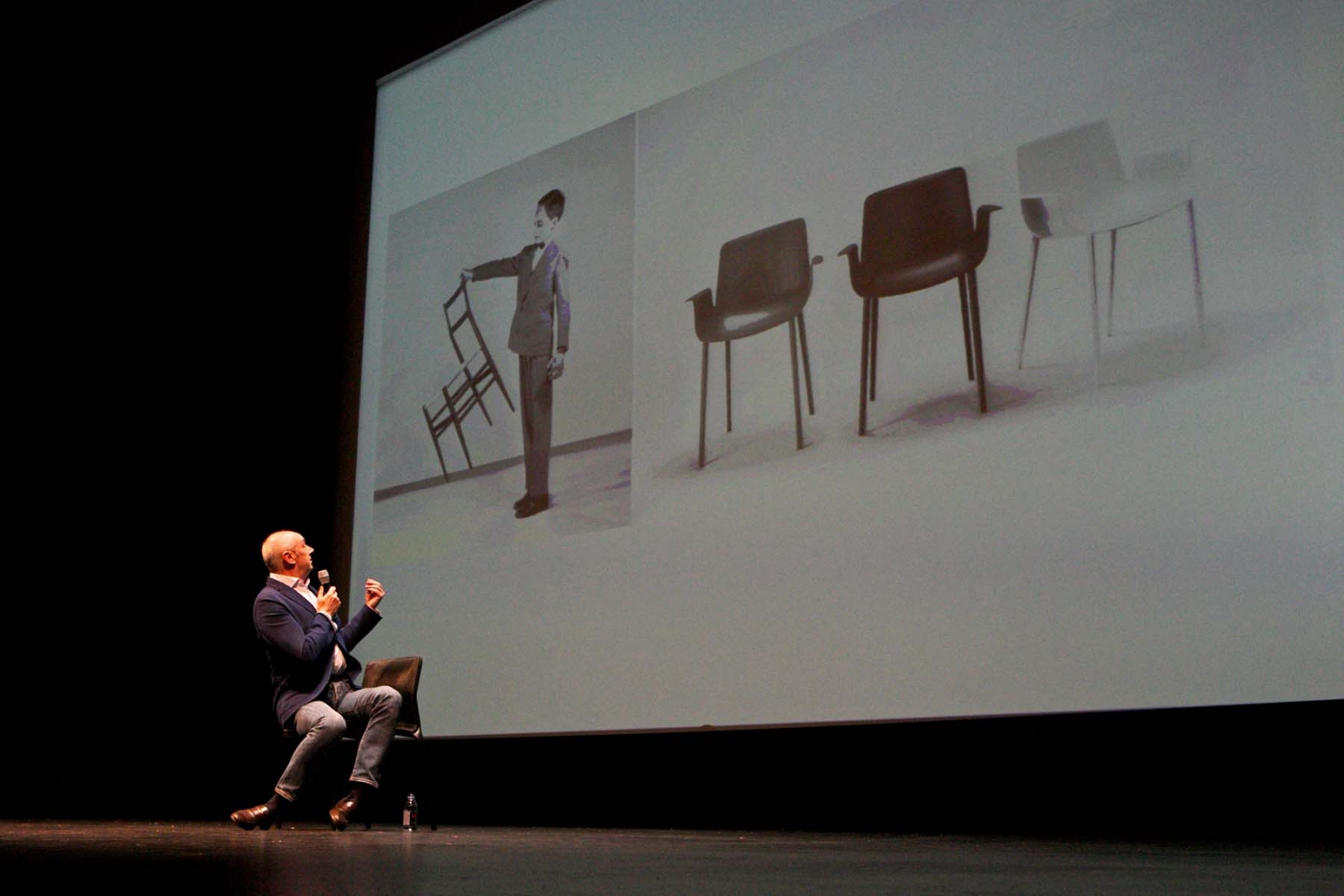 Over the years, Luminaire has mentored and showcased many designers, both upcoming and well-known. Last May, Lissoni (pictured) gave a special lecture at Chicago’s Museum of Contemporary Art to celebrate a display of his work at the Luminaire store.

It is not only the famous, or even the near-famous, who are on the Kassamali radar. Nasir is a familiar figure at the Salone Satellite in Milan, which exhibits works by young designers. He has been a juror, but even when he is not officially judging, his observations carry weight. One year, for example, he and Nargis spotted a very young Japanese designer, a recent Pratt graduate, and invited her to create an exhibition in Miami. “Nasir is like my father in the design world,” says the up-and-coming Nao Tamura. “He has these sharp eyes that can see everything. He makes me want to keep up the best work possible.”

This last quality, the restless quest to find new designers, which in turn means new ways to see the world, characterizes the Kassamalis and Luminaire. “Nasir has always innovated and brought interesting designers to the forefront, no matter how young or well-known they may be,” says Giulio Cappellini. “It takes an extraordinary intuition to recognize outstanding products, and he often took a risk in presenting a preview in North America. In his way of working, everything is perfect, nothing is left to chance. Nasir always manages to surprise us.”