The plug-in craze of the experimental architectural groups of the 1960s spawned mostly paper fantasies. In Slovenia, one scheme—by the architect Sasa Machtig—was actually realized. 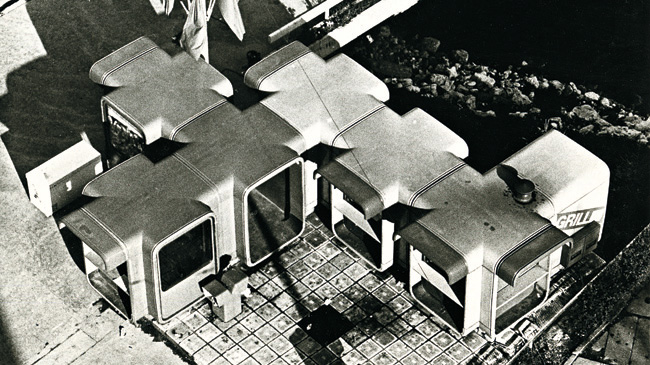 Slovenian designer Saša J. Mächtig conceived the concept for the Kiosk K67 project half a century ago, but its ideas of indeterminacy and open-endedness remain relevant.

Even in relative old age, the Kiosk K67—a shape-shifting system of modular fiberglass structures—keeps active. A kiosk in Kromberk, Slovenia, in the former Yugoslavia has become a beehive. Another, used by a Bosnia and Herzegovina food vendor, has received a masonry addition. In Ljubljana, a kiosk that formerly sheltered parking lot attendants now supports an automated ticket machine.

These may not have been adaptations the Slovenian designer Saša J. Mächtig had in mind when he first conceived the K67 50 years ago. But accounting for all of them would have been impossible. In theory, the system permitted unlimited configurations and variations. By the time production stopped in 1999, around 7,500 units of the K67 had been manufactured. While most remained in Yugoslavia, some were exported abroad—among other places, to Poland, Japan, New Zealand, Kenya, Iraq, the former Soviet Union, and the United States. Around the world, they were adapted to uses ranging from border patrol stations and ski lift ticket booths to retail and fast-food stands. No one is really sure how many are still in use today, or what other kinds of folksy, improvised alterations have been made to them, but among the greatest pleasures of the kiosks is their endless capacity to surprise. The K67, a recent retrospective of Mächtig’s work at the Museum of Architecture and Design in Ljubljana managed to restore its original brilliance. And it did so without suppressing the deviations. As the show’s curator Maja Vardjan writes in her catalogue essay, what distinguishes the K67 is “its position between architecture and industrial design, embeddedness in the framework of a modern city and society, the rituals of daily life, and, last but not least, its persistent capacity to reinvent itself.” While the visionary architectural schemes of the 1960s and 1970s may inspire wistful longing (What could have been!), the K67 kiosks, even as they disappear from view, provoke a question: Why have they persisted for so long?

The 75-year-old Mächtig’s life and work are bound up in the transformations of Yugoslavia, from its status as a nonaligned nation with a system of self-governing socialism after 1948 to its breakup and the subsequent Balkan wars during the 1990s. Born in Ljubljana in 1941, he entered the design profession as a first wave of modernization—marked by processes of mass production, industrialization, and urbanization—was concluding. At the same time, features of the market were being integrated into a planned economy. These changes presented opportunities that Mächtig was well prepared to tap.

Studying at the Ljubljana School of Architecture in the early ’60s, Mächtig enrolled in Course B, an interdisciplinary program that, in its brief, two-year existence, would influence a generation not only of architects but also industrial and graphic designers. Orchestrated by Edvard Ravnikar—the leading Slovenian architect of the postwar period—and modeled on the Bauhaus and the Ulm School of Design, the curriculum consisted of what are today pedagogical commonplaces: a combination of theoretical inquiry and concrete projects, with an emphasis on analysis, research, and experimentation. Updating Ernesto Rogers’ famous statement about an architect’s activity extending “from the spoon to the city,” Ravnikar urged students to consider “the smallest consumables to regional spatial solutions.” Mächtig would make this philosophy his own. Rather than design, say, products one week and master plans the next, he used the K67 to bridge different scales and disciplines, from industrial to urban design, simultaneously. 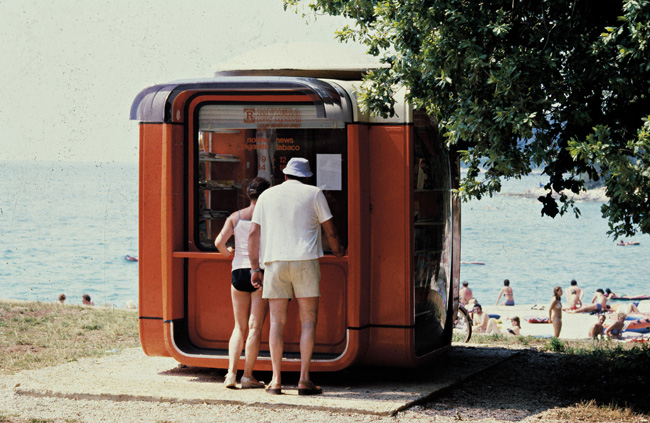 It was by chance, while securing approval for his first independent project—a translucent reinforced-polyester canopy for a café in Ljubljana—that Mächtig learned of city planning officials’ desire for new kiosks. On his own initiative, he prepared a design, embracing new industrial materials and the logic of mass production. By his assessment, the existing structures (used as tobacco shops and newsstands) were treated too much like small houses in their conceptualization and construction. Presenting the K67 project for the first time, Mächtig offered a revised set of precedents: “In its modern interpretation the kiosk allows the possibility of growth and change, in purpose perhaps similar to Scandinavian cupboard systems and in terms of design to automotive bodywork.”

Mächtig’s initial scheme consisted of five primary load-bearing elements, plus accessory equipment: two types of canopies, and interior design elements like shelving systems, light fixtures, and window blinds. A full-scale prototype— colored bright red for shock value—was completed in 1969. The following year, after the K67 was featured in Design magazine, Emilio Ambasz, then a MoMA design curator, inquired about adding it to the collection. A delay in shipment foiled a plan to hoist the bulky units into the museum through a window, so when Mächtig arrived for the opening of a show of recent acquisitions in December 1970, he found the two-unit K67 not in the gallery but in a more public setting—outdoors, on the 53rd Street sidewalk.

The K67 is a model for engaging abstract processes by precise, concrete means.

Had it been a second-generation model, produced after 1971, the kiosk would have been whisked through the museum doors. Unlike the original monolithic units, the newer cross-shaped structure, composed of separate ceiling and floor shells and four corner posts, could be disassembled. The structure, measuring eight feet in all directions, supported secondary elements like doors, vending and convex windows, and blind I-panels. Occasionally, Mächtig even developed special customizations for particular functions, such as fast-food preparation.

A restless designer and deft businessman, he believed the K67 system, if it was to remain commercially viable, needed to evolve with changes in user habits and notions of comfort, as well as advances in industrial processes. Exhaustive prototyping was therefore imperative. “That was the message I got from General Motors,” Mächtig recalled recently of his encounter with the automobile company’s important Technical Center in Michigan, which he toured following the MoMA exhibition. “I saw how they developed certain parts of the car, then tested, and then put things together.” 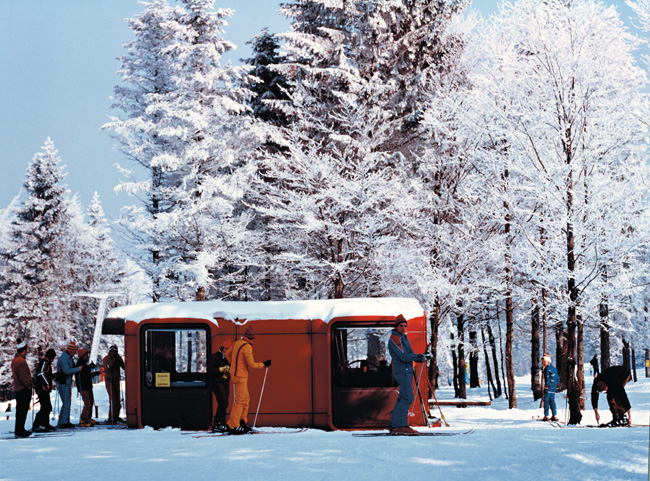 Mächtig would eventually extend ideas of the K67 to designs for waste bins, public telephone booths and hoods, information display cabinets, a bus stop shelter system, and recyclable-waste containers (except for the phone booths, all were mass-produced to varying extents). According to Vardjan, this street equipment, together with the kiosks, “shapes an intangible infrastructure through small scale and number.” Remark- able as individual works of industrial design, they reached their full potential only in context, as participants in their environments. Influenced by Christopher Alexander and Kevin Lynch—whose writings were introduced to Mächtig by Ravnikar—he considered how the street equipment shaped human perception. “A regular waste bin is more than an element that serves to keep the city clean; it is a means to design public space,” Mächtig wrote in 1977. “A well-placed bin can conclude a journey, mark a change of direction, demarcate two areas through a rhythm of identical elements and more.” In Lynchian terms, the kiosks were nodes, consolidating and generating activity.

But can design that thrives on sensitive siting survive the whims of urban change, inevitable and unceasing as it is? Mächtig’s designs maintain a paradox at their heart—they pursue regulation and indeterminacy in equal measure—but also a unique durability. While the K67 kiosks were not intended to exist in isolation, the qualities of their design on the level of the single, self-contained unit are a hedge against rapid extinction. Observing the K67’s current status in postcommunist countries, the critic Owen Hatherley remarked that it suggests “some possible ways around the dichotomy of desperate vs. corporate.” Indeed, the K67—by averring the opposition between objects and systems, hardware and software, the part and the whole, the top-down and the bottom-up—is a model for engaging abstract processes by precise, concrete means.

Compared with the fantastical plug- ins of Archigram and the Metabolists, the K67 may seem mundane. But today, now that impermanence, open-endedness, and interactivity inform solution- oriented endeavors from incremental housing to small-scale “tactical” interventions to emergency shelters, the pragmatism of the K67 is particularly relevant. In his career-long devotion to, and continual reassessment of, extremely focused problems, Mächtig offers another, more patient way to be a designer. Since 2003 he has been developing a new generation of kiosks, and soon user testing will begin. As Mächtig knows well, “you always have to listen.”