The Pallet House, a project first conceived as an entry for Architecture for Humanity’s transitional housing competition, has come to fruition. The goal: to create a low-cost shelter for victims who lost their homes in natural disasters or war. The result: a charming, $2,000 – $2,500 makeshift bungalow that features a multifunctional table and sitting […]

The Pallet House, a project first conceived as an entry for Architecture for Humanity’s transitional housing competition, has come to fruition. The goal: to create a low-cost shelter for victims who lost their homes in natural disasters or war. The result: a charming, $2,000 – $2,500 makeshift bungalow that features a multifunctional table and sitting area, a sleeping loft, benches and counter space, roof access, bathroom and shower area, window sill plant-holders, and a floor that extends to create a small outside deck. Tack on a doorman, and you have more amenities than most apartments in New York City.

I-Beam Design, a New York-based architecture firm, recently completed construction of their Pallet House–a 500 square foot dwelling unit composed of 100 re-used shipping pallets. The structure took approximately one week to construct and was built as a collaborative effort on the part of Azin Valy and Suzan Wines—owners of I-Beam—as well as generous members of the New York community including contractors, carpenters, friends, students, and even a past client of the firm. 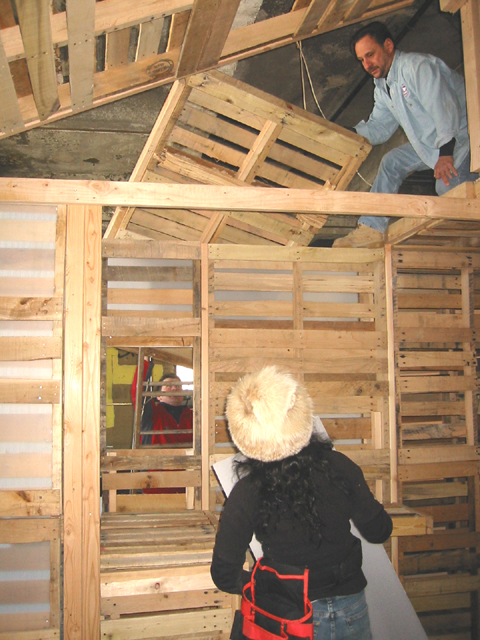 While originally intended to aid returning refugees in Kosovo after their land and homes were decimated by war in 1999 – 2000, these houses could be utilized in any emergency. The structures are designed to be shipped in flat-packed boxes containing instructions, pre-assembled pallets, a nail gun (and nails), electric and circular saws, and a matte knife—the only objects necessary to construct them. With this “Lego set” construction, as Valy describes it, the units can be adapted depending on the needs of the family. The duo are currently experimenting with corrugated-plastic wall panels, and Styrofoam insulation for future versions. 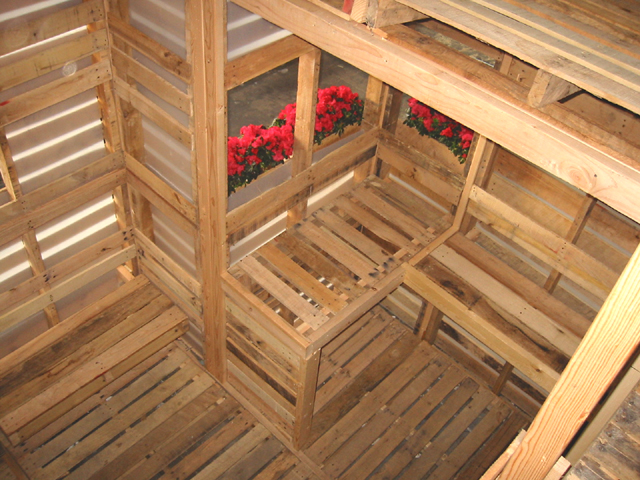 The view to the kitchen from the sleeping loft
The Pallet House’s flexibility does not stray far from I-Beam’s conceptual underpinnings. In past commissions, Valy and Wines created storage units that also function as stairs, couches, and other transmutable elements. The Pallet House is similarly fluid, dynamic, and attentive to its inhabitants; but most importantly it offers a grounding shelter to a family in flux. 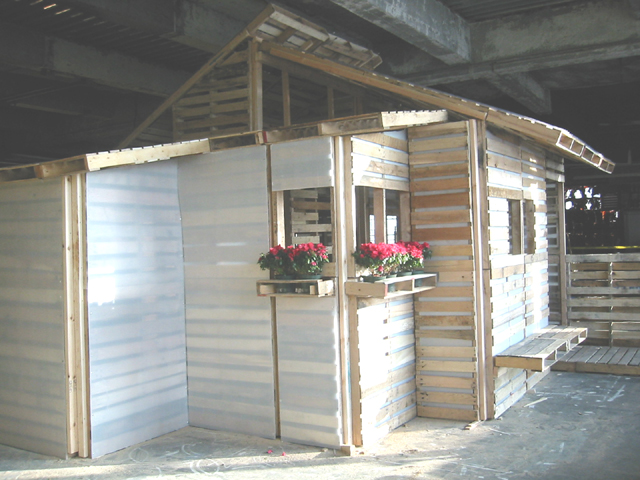 If you happen to be part of the design swarm at Milan’s Furniture Fair next week you’ll have the opportunity to see this project in person. Two new Pallet Houses will be constructed in Milan: one at A House for All, an exhibition at the Architecture Triennale (which will be up through October) and a second house in front of the Duomo.

I-Beam intends to auction off the NY-built Pallet House to interested organizations and will donate a portion of the proceeds to a humanitarian effort. Contact I-Beam for more information.

Pallets were donated by by Pallets Unlimited, Inc. and contractors that volunteered time include Metropolitan Mason, Jimmy Di Domenico, and Mario DeNucci.