All Together Now: Part IV

Sunday, December 18, 2011. Installation day at the Donald E. Long Juvenile Detention Center. After a grueling series of rigorous design sessions, seemingly endless debates over major priorities and tiny details, and days of triumphs, disappointments, dust, sore muscles, festering frustrations, egos, ideas, and an uncountable number of small, stunning moments of resolution and grace, here we all were, together, staring over a jumbled pile of bookcases, drop cloths, and to-do lists at a looming 4:00 pm deadline. 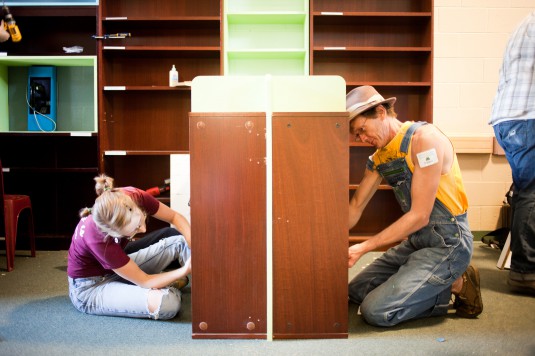 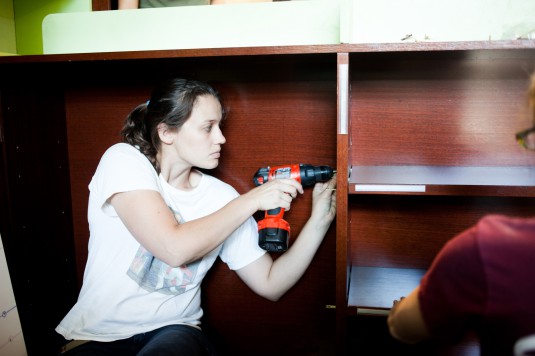 Configuring (above) and assembling (middle and below) the modified, relocated bookcases 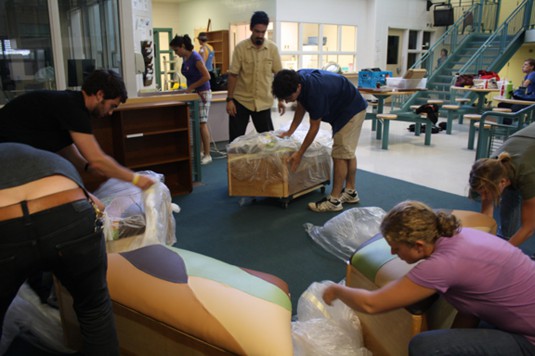 Delivering and setting up the reading circle seating 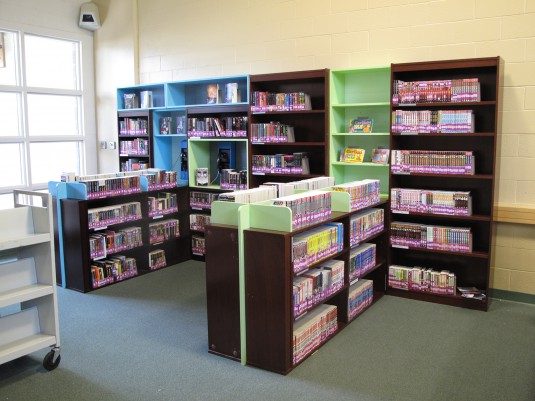 The bookcases, complete with books 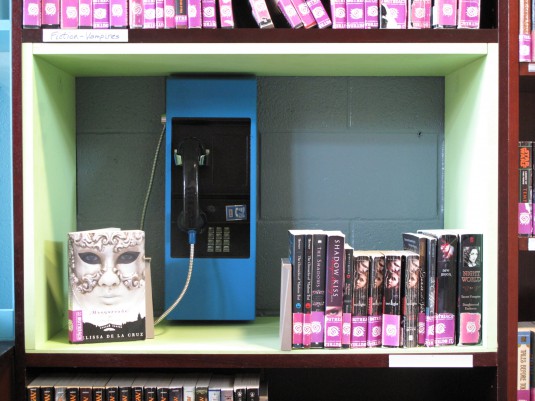 Only ten days before, we had been nervous strangers. Each of us had brought our idiosyncratic set of skills and experiences to the table, yet in our short time together, we had learned to speak the same language. We built a library, but we also carefully, laboriously, and sometimes painfully built a community, by hand.

Looking back now, I can see that the entire design-build experience was really about building trust. As new MFA students, we had to learn to trust the people who would be our colleagues and mentors for the next two years. As designers and makers, and as representatives of our new program, we had to be worthy of the trust being placed in us by an unlikely group of stakeholders.

Everyone involved in this ambitious project assumed some level of personal and professional risk, and we all hoped to prove that the risk was justified. And so we all committed ourselves to the project. Over ten days, relationships formed, security rules were relaxed, friends made donations, perspectives shifted, and everyone worked, and worked some more. Each of us, at some point in this process, took at least one step beyond what we thought was possible so that by the end, instead of expecting disappointment and restrictions, we all learned to trust our ability to create real solutions.

During the building phase of the project, the AC+D students worked in small, largely independent teams of 3-5 people, each focusing on a major component of the overall design. This was possible because the early round-robin design process had embedded the key ideas and overall vision of the larger group within the work each team was executing. Members of the paint team didn’t know the finer details of the bookcase team’s installation plan, but they did understand our general strategy and its connection to the overall design intent. 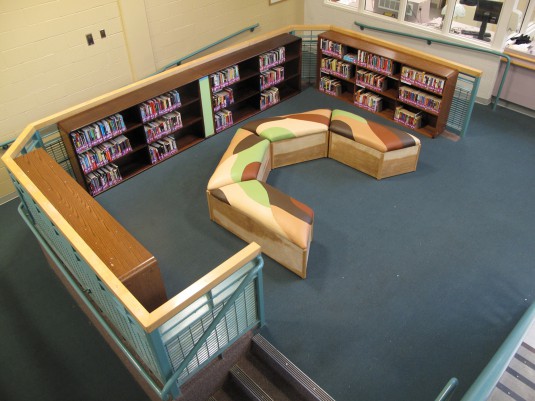 The reading circle and bookcase surround 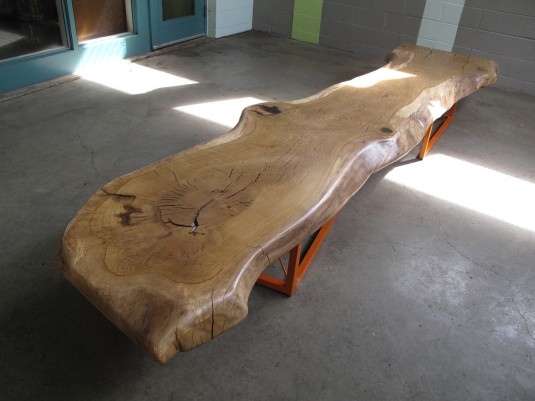 The oak slab bench in the outdoor court 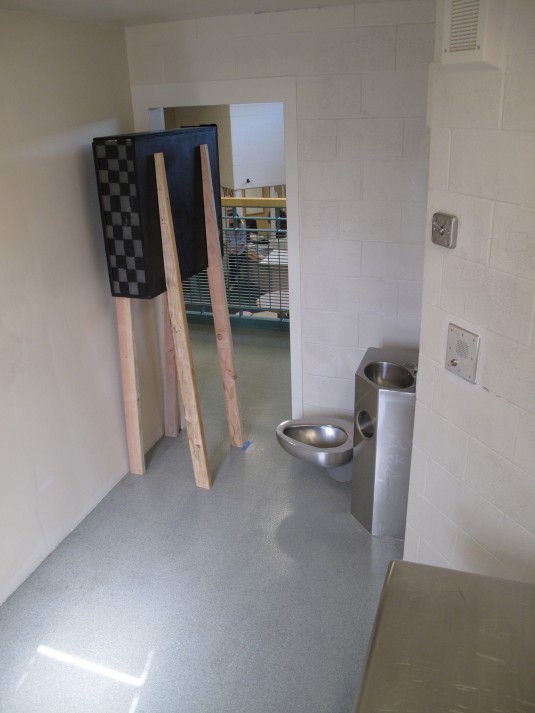 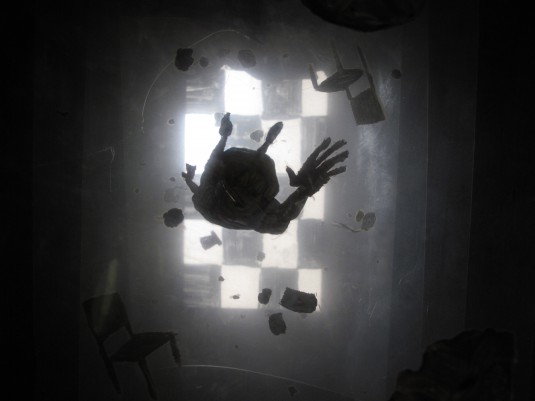 Installation day looked like chaos. But it felt like working as part of a very determined, many-armed creature. Except that this implies a single head controlling all the action. In fact, we were all acting toward a common goal, each individual decision working together because we were all driven by the logic of a unified strategy. Even as I frantically joined bookcases together, I understood what needed to happen before the reading circle benches could be put in place in another part of the room. When I needed help drilling holes for shelf brackets, I knew who was likely to be available, because I understood the scope of each team’s work. When it came time to fasten the bookcases to the wall, handing off this task to someone from the seating team required little explanation because we all understood the requirements and restrictions that had gone into deciding how this connection would be made.

During the opening ceremonies, Supervisor Kevin Hunking remarked that walking through the space the previous day, he couldn’t imagine how we’d pull it off in time. What’s perhaps most telling is that, despite what must have looked to him like an impossible mess of tools and debris, his next thought was that he trusted us to do what we’d said we would do. In fact, we heard nothing about his doubts until after the ladders and paint cans and screw guns had all been carted back out through the long hallway, past two guard stations and three security doors to our waiting cars, and the room had filled with librarians, administrators, faculty and county dignitaries.

I don’t think we fully understood the impact of what we were doing until it was all over. Of course, we understood, that this experience was a required component of our education. And some aspects of what the project had to address were clear from the beginning. All of us were affected by the dark, cramped reality of the old library and the overwhelming oppressiveness of the space in its original state.

After meeting with residents of the Long Center, none of us made another design decision without hearing their voices in our minds.

I do think, however, that our perspective was in some ways limited to the space of that room until the exchanges that occurred during the ceremony at the end of installation day. The unspoken need that really found a voice on that final day came from the dedicated public servants who had worked to make this project possible, and on whose daily lives our work will continue to have an impact long into the future. One by one, they stood up and spoke to the assembled group about gratitude, hope, possibility, and expectations met and exceeded. Slowly, it became clear that, like the kids they serve, these folks are accustomed to being neglected by their community.

As students, we had all come here because it was required of us. Later we become committed because the work was so obviously right and good and needed. What we didn’t understand in the beginning was the shocking rarity of such an engagement and the support it got from beyond the walls of the detention center. Of all the things we constructed together, it is the real, ground-tested, tangible nature of this community connection that showed us our power, as designers, to create lasting change.

All Together Now: Part I

All Together Now: Part II

All Together Now: Part III

All Together Now: Part V

All Together Now: Part VI

Coren Rau (along with Meghan Morris and Kyla Mucci) is a 1st year student in the MFA in Applied Craft and Design, offered jointly by Oregon College of Art and Craft and Pacific Northwest College of Art.