On June 20, British architect Sir David Chipperfield took center stage at a ceremony in Barcelona to officially receive the much-coveted European Union Prize for Contemporary Architecture – Mies van der Rohe Award. Aside from having the longest name imaginable—henceforth shortened by this author to “Mies Prize”—it is also regarded as Europe’s most prestigious architecture honor.

Sir David has been having a good time of it these past two years. He was knighted in 2010 and was the recipient of this year’s RIBA Royal Gold Medal. He has been winning so much that people mistakenly assume he has also won a Pritzker Prize. To set the record straight, no, he has not. Not yet, anyway. There is always the possibility of a Chipperfield trifecta next year.

Why all the acclaim? What is so special about Sir David’s architecture? Blair Kamin, architecture critic for the Chicago Tribune describes his 2006 Des Moines Public Library as the sort of building that enlivens cities—in contrast to the soul-stealing dross of mainstream development.

Jonathan Glancey, the Guardian’s critic, characterizes Chipperfield’s architecture as “Bold yet graceful, full of impact yet ­devoid of tricks.” He furthermore emphasized how this is the sort of architecture that “could point the way ahead” out of design’s excesses.

I could go on, however, it is interesting to note that despite the accolades, Sir Chipperfield has had a difficult time fitting his brand of attention to detail into Britain’s cost-conscious building sector. To date, his work has thrived primarily on the Continent where the culture of high architecture is supported. Thus, the prize. As Chipperfield once noted, “It’s as if any decent new architecture in Britain happens more by accident than design.”

In keeping with the broader goals of the European Commission’s cultural programs, the Mies Prize is bestowed for work that exemplifies the vital role good architecture plays in the everyday lives of people. The project deemed to have met this criteria was Chipperfield’s non-purist, non-historicist and hence somewhat controversial renovation of Berlin’s Neues Museum. 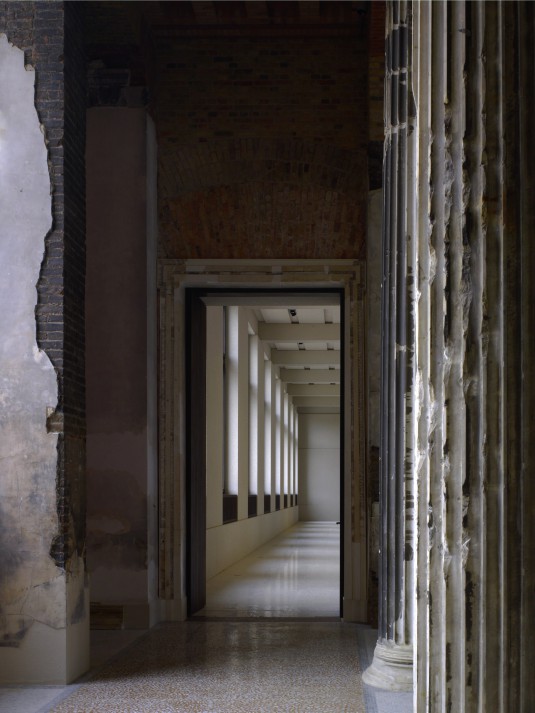 His solution avoids the trap of historical contrast or parody and thereby succeeds in enhancing the continuity of Friedrich August Stüler’s original nineteenth-century design. As Fabrizia Vecchione reported in Domus, “The two layers that overlap, although clearly recognizable, are not separated but merge in the design of a building that wants to be perceived as a single gesture.”

Chipperfield chose to, in a sense, “curate” the damage the museum sustained from allied bombing during the Second World War. This is where the controversy comes into play. The scars are left intact, framed by Chipperfield’s delicate, slight of hand in polished concrete. It’s the sort of architecture that, true to the meaning of the award, plays a vital cultural role by communicating many complicated layers of meaning all at once, while at the same time stepping aside so the identity of the original is maintained.

Guy Horton writes on architecture for The Huffington Post. He is a frequent contributor to Architectural Record, The Architect’s Newspaper, and author of The Indicator, a weekly column on the culture, business and economics of architecture, featured on ArchDaily. He is based in Los Angeles. Follow Guy on Twitter.