Assessing the state of anything, let alone the whole design profession, seems a daunting task today. But Tim Brown, the CEO of the design firm IDEO, and Michael Murphy, of MASS architects, got together to do just that at “State of Design” last month.  Responding to questions by Metropolis editor-in-chief Susan Szenasy, they turned the tables on the audience by arguing, among other things, for developing new methods of assessment.

On the Social Sector

Brown, just back from World Economic Forum at Davos, was the voice of experience: progressive but cautious. His comments about fighting for a larger relevance for design and tackling systemic problems came at an interesting time, just as IDEO is all set to launch a non-profit wing called Ideo.org. This new venture will be IDEO’s way of engaging effectively with the social sector, Brown explained, because it will allow them to work with collaborators and funding agencies who have so far found it difficult to connect with a for-profit firm. The new IDEO wing will also run a fellowship program, part of the mission to “develop as much knowledge about design in the social sector, and spread it out.” Social designers still form just a tiny slice of the world’s design practice; and as Brown put it, “We need to stand on each other’s shoulders.”

Murphy, who was featured as a game changer in our January 2011 issue, is definitely going to be an important member of that tiny slice. Charged with the success of his firm’s maiden venture, the Butaro hospital in Rwanda, Murphy was unabashedly optimistic about design’s “fight against irrelevance.” In his first semester at Harvard GSD, Murphy met with Dr. Paul Farmer, who was there to speak at Harvard’s Public Health School. “It was a talk about public health care,” Murphy remembers, “and he was talking about houses, about building.” That conversation led to the project in Rwanda, but it also taught Murphy the value of speaking to another discipline. He discovered that a design intervention can have unexpected consequences – the hospital that MASS built will become the keystone for a number of other projects in Rwanda, including a new paved road, and the country’s first architecture school. 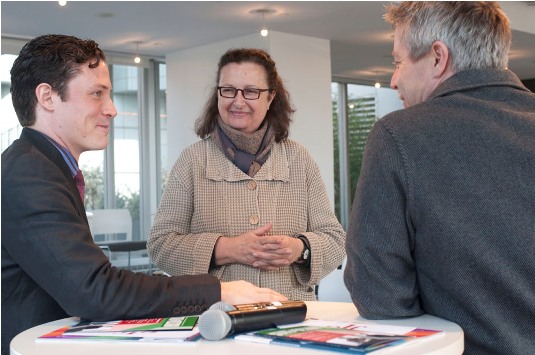 On Design and Science

For two designers immersed in the social sector, Brown and Murphy discovered a surprising common interest—Science. Inspired by the conversations at Davos, Brown began by applying a scientific metaphor to IDEO’s Holy Grail, systems design.  The modernist designers saw systems thinking in a Newtonian way, expecting absolute predictability. Instead, Brown argued, we should be thinking like Darwin. Systems evolve, and so should the solutions. This means that designers have to be insiders, working with others within the system. It also means few final solutions, but lots of iterations. We cannot plan for absolutely everything.

Murphy went one step further, suggesting that we should expect systems to fail. The hospital in Rwanda, for instance, is built to deal with power shutdowns. It runs on both solar and hydroelectric power, but it is also passively ventilated, thereby hugely reducing its dependence on electricity to keep patients comfortable. Figuring out basic, failsafe solutions like this is the true challenge, Murphy suggested. Scientists have shown that if a hospital has 12 air changes in an hour, it will prevent Tuberculosis patients from infecting each other. But while science turns to sophisticated solutions to make this happen, architects know that the answer might be in passive ventilation. 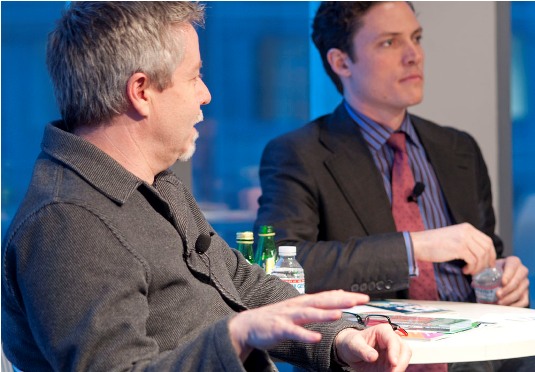 But in advocating a deeper relationship between design and science, one inevitably comes up against the problem of proof. Science needs evidence, Murphy explained, and designers don’t have the data yet to back up their claims. We need to study the impact of our work, and make this information available. This, of course, is easier said than done. Proving the real world impact of projects has become the bête noir of social design, especially because, as Brown suggested, the field itself is evolving and unpredictable.

Susan Szenasy pointed out that science has long experience of looking for effect, but Brown countered by suggesting that scientific methods may not be sufficient. Design works not just by manipulating the physical world, but also by encouraging the right kind of behavior. Science is just learning about studying behavior, he said, but designers get this intuitively. A design’s efficiency can also be driven emotionally, which is much harder to measure and recreate.

There were no real answers to this conundrum, and none could have been expected in the course of one evening. But eventually, a picture of the State of Design did emerge – that of a profession opening up, desperately seeking a transfusion of ideas. “I don’t want to hear about silos anymore!” Szenasy exclaimed, and Brown echoed the sentiment. “We need to make designers into researchers and researchers into designers,” he said, “and we need to find economically sustainable ways to do it.” The message was clear:  now when we talk about collaboration, we mean business. And science is probably going to be our first unlikely bedfellow in our dual mission of keeping our profession relevant, and making the world a better place.