Peter Walker on the Oakland Museum

The architect Kevin Roche on the construction site of the Oakland Museum of California, circa 1969. When we featured the Ford Foundation Building two years ago, I interviewed the landscape architect Peter Walker, who in talking about the importance of that Kevin Roche/John Dinkaloo-designed structure spent as much time extolling another building by those architects: […]

The architect Kevin Roche on the construction site of the Oakland Museum of California, circa 1969.

When we featured the Ford Foundation Building two years ago, I interviewed the landscape architect Peter Walker, who in talking about the importance of that Kevin Roche/John Dinkaloo-designed structure spent as much time extolling another building by those architects: the Oakland Museum of California. For our story on the restored building, I talked to Walker again. Peter has an encyclopedia grasp of landscape architecture history and the verbal ability to create a vivid picture of place. Here are his (slightly) edited memories of the building, as it was 41 years ago when it first opened.

“The Oakland Museum was one of the first buildings where you walked into the landscape and immediately realized that it was a large part of the public space. The expression of the building was this indoor/outdoor thing, which didn’t quite work in some ways, because the museum had trouble with entries. They intended for visitors to walk from the indoor galleries right out to the outdoor galleries and back again, but it wasn’t quite that interactive.

“The other key element here is that the building looks out over Lake Merritt. And whether you were inside or out, this view is important. Those multiple terraces—they weren’t just eddying spots—they were places with art. So the journey was as much about the outside as the inside. I remember when you walked up to the top and looked down, it was like a visual index. You’d see all of the stuff below, and it made you want to go down and see it. But when you travelled up from the bottom, each one of those levels was a new experience, and it felt more like a big museum, where you never know what’s in the next room and that feeling draws you forward.

“Now I don’t know whether Kevin [Roche] or Dan [Kiley] did this—it’s hard to know where ideas come from—but the whole museum was built around a small group of Atlas cedars, which were in that lower interior courtyard. Blue Atlas cedars are a kind of a gray/blue color, really beautiful, and they put a piece of art in there, an orange/red George Ricky sculpture. The two worked beautifully together.

“The other thing that probably should be known: this was the only time that I’m aware of that Dan used a local landscape architect. Her name was Geraldine Knight Scott. Gerry was a great plants person. Her specialty was gardens that featured combinations of plants. Dan relied on her a lot, because I don’t think he knew the Mediterranean group of plants. He was a great plants man. He knew and used plants from the Northeast and the Midwest, but here he was working with plants that were a bit unfamiliar to him. He’d worked briefly for Garrett Eckbo, but very briefly. He didn’t really know the region, so he brought in Gerry Scott. 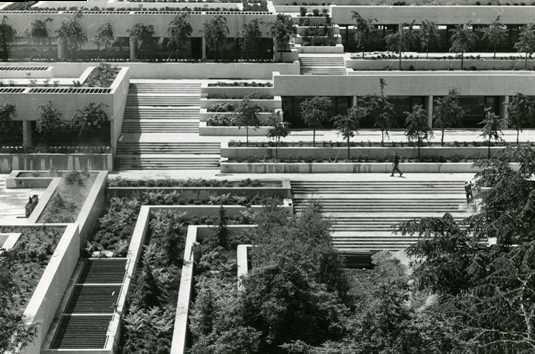 “And I can remember going up there, and the plants—these bougainvilleas—were just vivid. There was a series of holes and arbors, and when you were above you’d look down through these squares of Bougainvilleas, and when you looked up you’d see them against the sky. Kiley had Lantana growing up against other arbors. The building was Brut concrete and these very bright intense colors against the concrete was really beautiful.

“Dan worked on so many private gardens that I think he assumed these things in Oakland would be beautifully maintained and of course public spaces aren’t. This one was too complex. This was also first project that used fertilization through the watering system. In a way, it was part of the landscape’s demise because every time you watered, you also fed it. And there were certain areas that were overfed and grew too fast…a problem, again, with Mediterranean growth. You pour water on it, and it grows like hell. You pour water and fertilizer on it, and it really grows. So it was growing unevenly, but technologically the building was important from a landscape point of view.”