In a rare quiet moment some months ago, left with nothing but my own thoughts, I wondered to myself, ‘What would Imhotep think about architecture today?’ Imhotep Imhotep, the Egyptian, was the first documented architect. He designed the Pyramid of Djoser at Saqqara in 2,630 BC. What most people don’t realize is that he was […]

In a rare quiet moment some months ago, left with nothing but my own thoughts, I wondered to myself, ‘What would Imhotep think about architecture today?’ 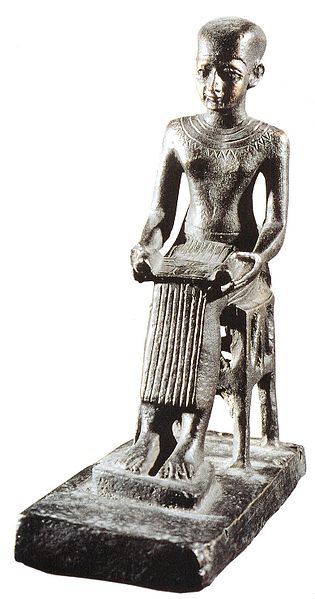 Imhotep, the Egyptian, was the first documented architect. He designed the Pyramid of Djoser at Saqqara in 2,630 BC. What most people don’t realize is that he was also an engineer and a builder; and the first physician. He was also a high priest, chief carpenter, chief sculptor and maker of vases in chief. Like Da Vinci and Michelangelo of the Italian Renaissance – who between them designed buildings, engineered battlements, advised popes about war while creating works of high art for them, dissected bodies and invented things like airplanes and submarines, Imhotep is what’s commonly referred to as a polymath: ‘a person of wide-ranging knowledge or learning,’ as www.oxforddictionaries.com defines it.

Until the Second Industrial Revolution, the people who led the efforts to create our buildings, cities, and infrastructure were polymaths. The term of choice was Master Builder, and the role included strategic advisement, planning, design, engineering, and construction – each of which are considered distinct professions today. In fact, before the 20th century, the common distinction between these words was negligible, though the skills required to master each were quite varied. The polymath, it could be said, was someone whose breadth of learning was substantial enough that a holistic understanding of the built environment and the people within it enriched both greatly.

The years between 1867 and 1914 marked “the time when the modern world was created, when the greatest technological discontinuity in history took place,”wrote Vaclav Smil in Creating the 20th Century. During this period, innovation begat innovation in a snowball effect that culminated in mass production. Smil called it ‘The Age of Synergy.’ A by-product of this new world order was that as a result of new technologies, both construction and engineering became far more complex. Consequently, the need for mastery over each created new and distinct professions which, in turn, robbed architects of two-thirds of their professional territory.

The Master Builder’s world was subsequently fragmented into ever-branching spheres of specialization. Let’s take the branch of architectural engineering: we now have specialists in civil, plumbing, structural, vertical transportation, mechanical, environmental, fire protection, electrical, A/V, IT, acoustics, and aerodynamics, to name a few. Within each specialty, there are sub-specialties. In architecture, it’s no different – even more fragmented, perhaps. In my own office, there are trained architects who have spent entire careers focused on a single thing: rendering images of other people’s designs; detailing component connections so that enclosures don’t leak; studying the chemical health of building materials to avoid using those that make people sick. These are meaningful contributions, to be sure. But I wonder: ‘Would Imhotep recognize them as architects?’

Over the last decade, spurred once again by a global tectonic shift – this one brought on by the computer, software, and the Internet – the worlds of engineering, architecture, fabrication, and construction have begun to shrink, reversing the course of 100 years of expansive fragmentation.

What’s the ultimate reason for this shrinkage? Digital ubiquity. It has armed architects with analytical software tools to study the performance of our designs; it is fueling fabricators with new machines that can build directly from a screen; it has created a common platform for all of us to share data, tools, and most importantly, ‘wide-ranging knowledge or learning’. The polymath, re-integrated.

Early adopters of these paradigm-shifting technologies have broken down the walls within which most architects have operated for the last century. Anecdotally, an increasing number of my colleagues are diving earnestly into real estate development, building fabrication, construction, analytics, economics forecasting, operations, and software creation. And while trained architects have changed careers through all of modern history, what’s different this time is that these enterprising folks are not necessarily changing their careers so much as they are expanding them.

We are now immersed, once again, in a period of unbridled technological innovation – this time not by the analog (the Machine Age) but by the digital (the Information Age). And while the analog era required great skill specialization to engineer, create, produce, and operate physical things, the digital era demands an integrated approach to create and manage parametric processes (economics, planning, design, and engineering) that directly feed and, in fact, physically control outputs (fabrication and construction). In other words, cross-disciplinary thinking is an emerging prerequisite to success.

Lest you think this is the stuff of dreams – that architecture will always require the same foundation skillsets that made our fathers (well, my architect father, anyhow) successful, and that this new digital era is simply a fad – you need to look no further than to our newest group of employees, Generation Y (aka the Millennial or Net Generation).

They are the first generation to grow up with digital ubiquity. Armed with unparalleled access to both information and one another, they don’t recognize the boundaries that have defined our profession until now, and are accordingly pioneering a transformation of architecture, not just in its digitally-enabled physical form but in its creative and managerial processes. They write scripts to analyze zoning, economics, construction scheduling, and environmental influences to inform decision-making empirically. They crowd-source clients and communities to harness the collective intelligence and establish highest-value needs. They write programs to coordinate directly between 3D modeling software and robotic construction machines. And they aren’t afraid to leave the security of long-term employment and forge their own paths, focusing their integrated skills on redefining what it means to create and inhabit the built world.

So if the years preceding the 1860s defined the era of the Master Builder and the century that followed comprised the Age of Synergy – the ‘great technological singularity’ that Vaclav Smil wrote so eloquently about – then the good news is that the polymath is alive and well in this new third age, which we might term the Second Age of Synergy, with its digital connectivity and globally accessible resources.

Suddenly, inventing the next Egyptian salve or Renaissance-era submarine – as an architect – seems as feasible as, well, dreaming it up. In fact, these days, there may well be an app for that.

R. Anthony Fieldman is design principal at Perkins+Will, New York where he initiated an Ideas Competition open to the firm’s employees. The competition was set up to bring new ideas forward, in an effort to explore the changing nature of the profession and create a firm-wide dialogue around transformative ideas.