Today, the 2016 Serpentine Pavilion, designed by BIG, and four “summerhouses,” were unveiled at the Serpentine Gallery in London.

This article was published in partnership with ArchDaily.

The 2016 Serpentine Pavilion, designed by BIG, has today been unveiled at the Serpentine Gallery in Hyde Park, London. The design consists of an “unzipped wall” in which a straight line of tubular fiberglass bricks at the top of the wall is split into two undulating sides, housing the program of the pavilion. For the first time, the 2016 Serpentine Pavilion is also accompanied by four “summerhouses” designed by Kunlé Adeyemi, Barkow Leibinger, Yona Friedman and Asif Khan. The Pavilion and summerhouses will open to the public later this week, on June 10th, and will be in place until October 9th. 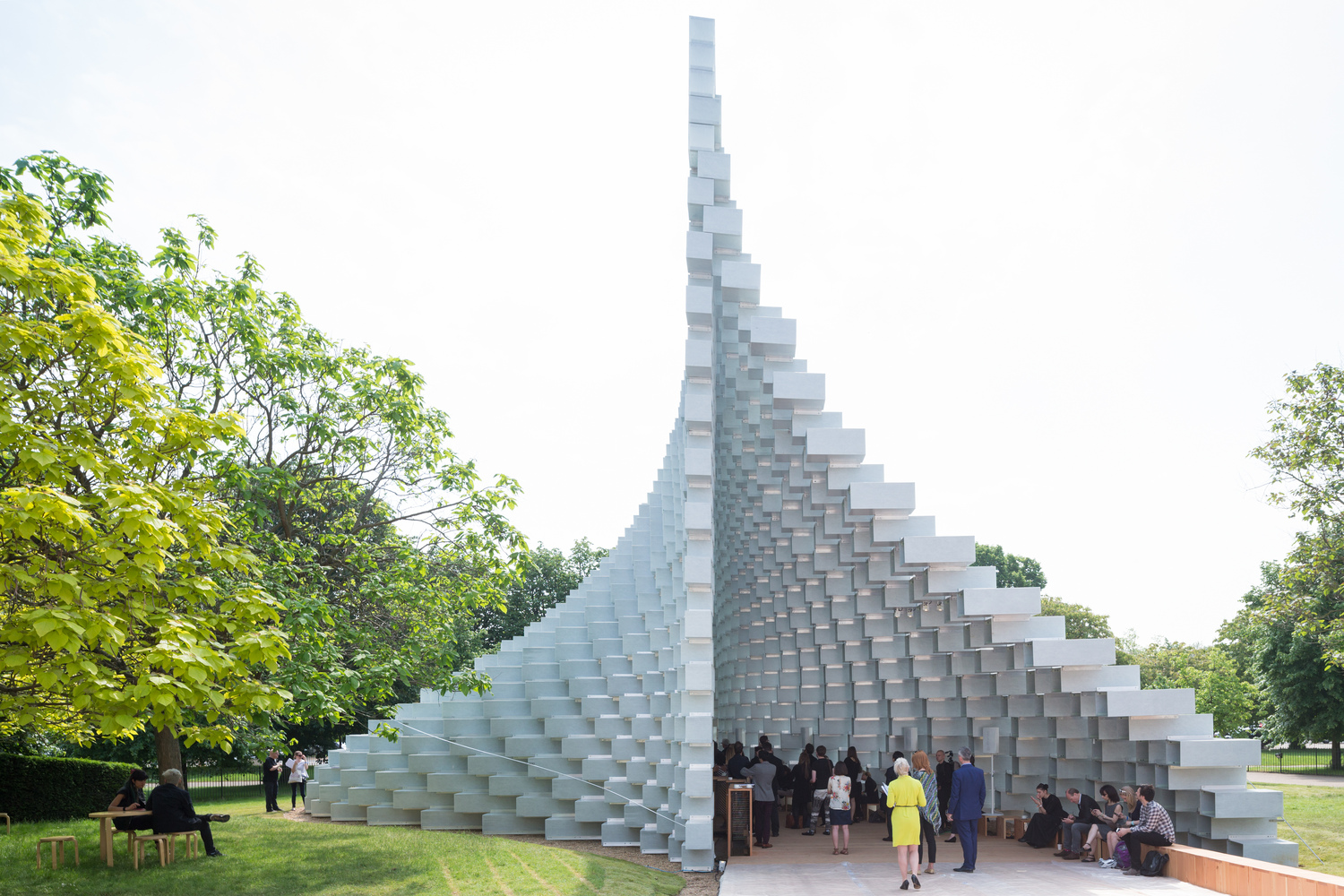 BIG’s Pavilion is created from pultruded fiberglass “bricks,” which let in light and views to the interior of the pavilion through each wall. The floors and furniture are constructed of wood which, along with the translucent fiberglass, provide “every surface with a warm glow and linear texture.” From the inside, the offsets of each individual brick creates an interesting play of light and shadow which is visible from within.

Explaining his design for the pavilion, Bjarke Ingels says: “This simple manipulation of the archetypal space-defining garden wall creates a presence in the Park that changes as you move around it and as you move through it. The North-South elevation of the Pavilion is a perfect rectangle. The East-West elevation is an undulating sculptural silhouette. Towards the East-West, the Pavilion is completely opaque and material. Towards the North-South, it is entirely transparent and practically immaterial. As a result, presence becomes absence, orthogonal becomes curvilinear, structure becomes gesture, and box becomes blob.” 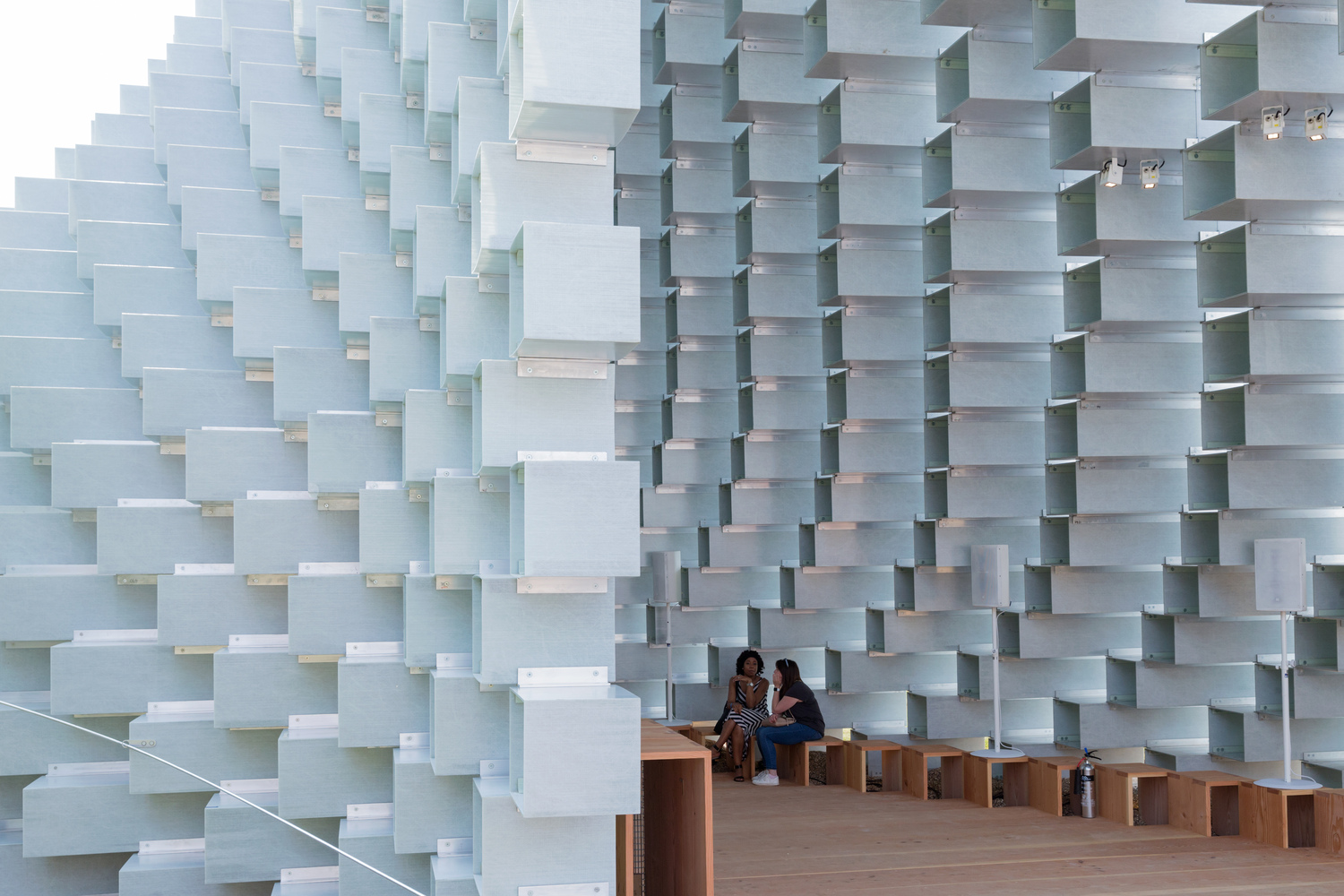 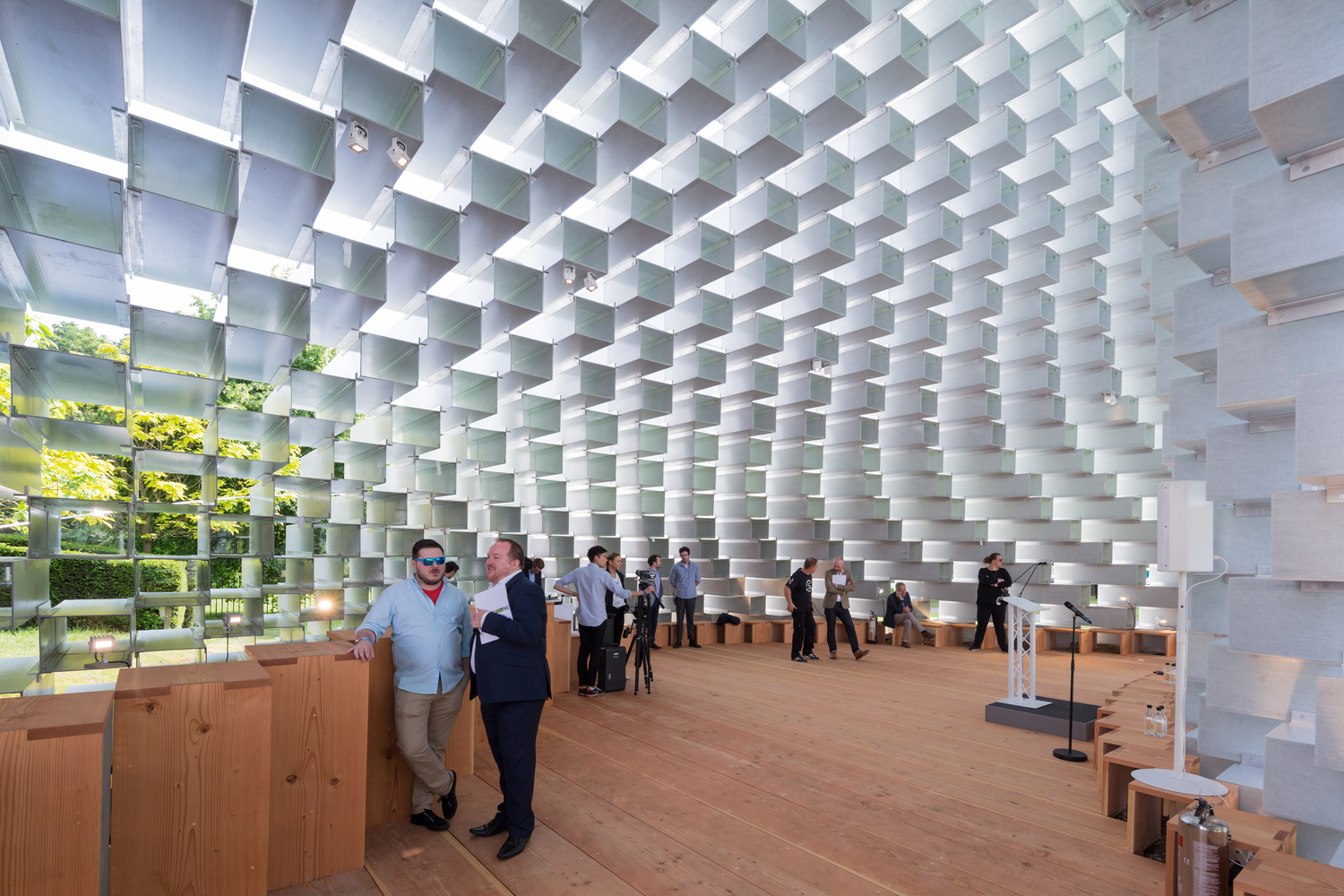 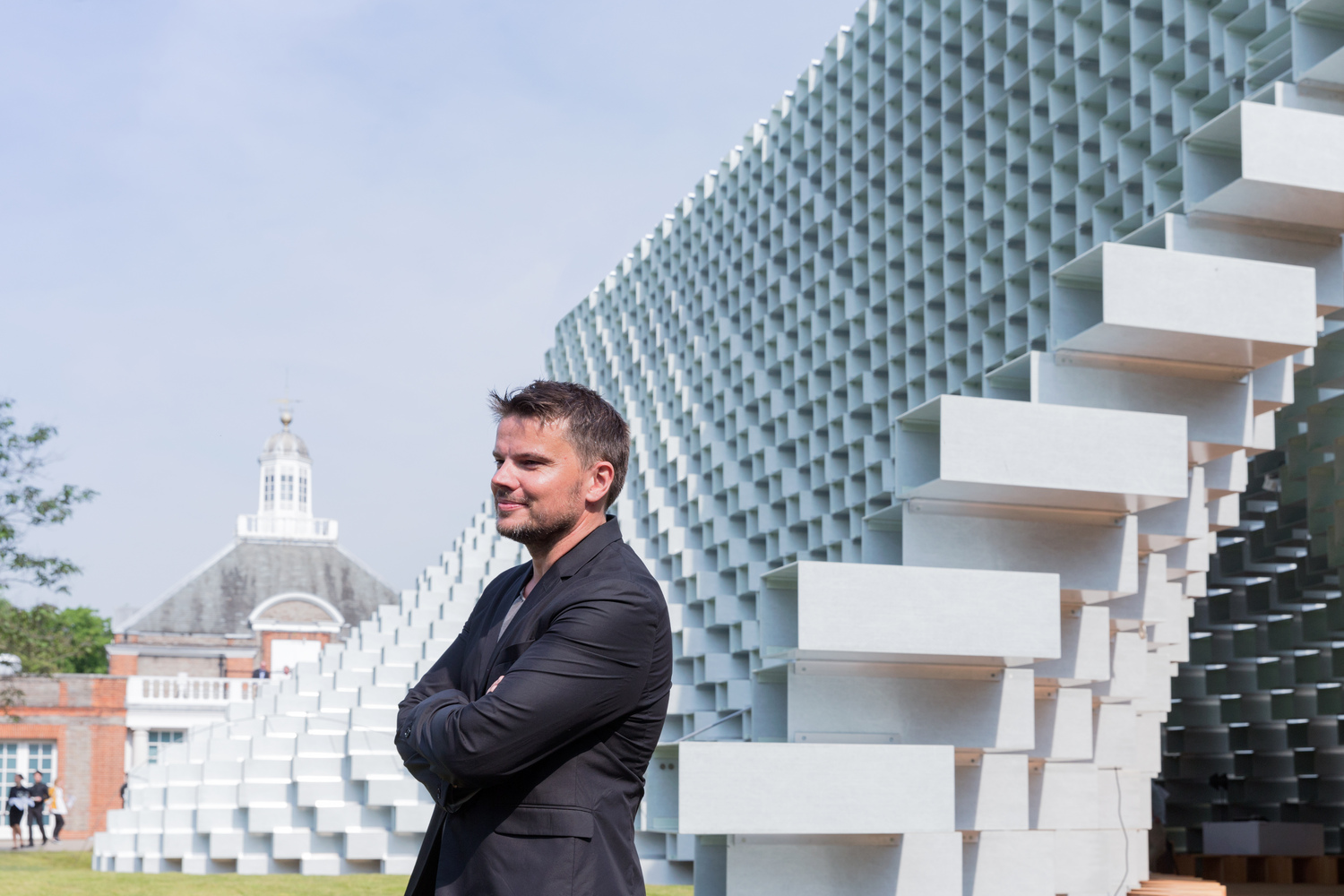 Kunlé Adeyemi’s interpretation of the summerhouse brief, which asked architects to take inspiration from the nearby 18th century Queen Caroline’s Temple, inverted the classical-style pavilion to turn its plan into an elevation. Assembled from sandstone blocks, just as in the original pavilion, the structure creates a comfortable place for people to sit in an unexpected way. 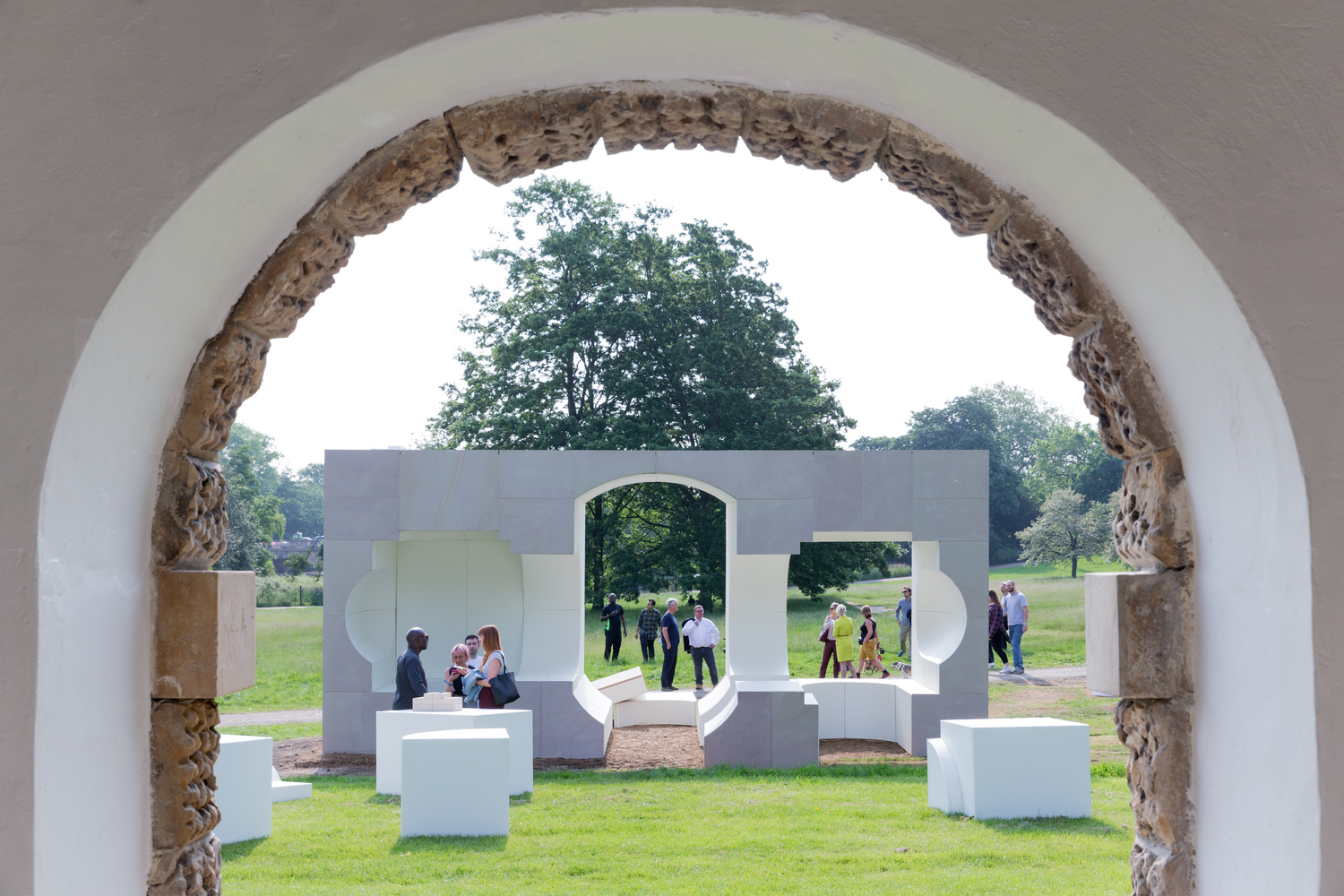 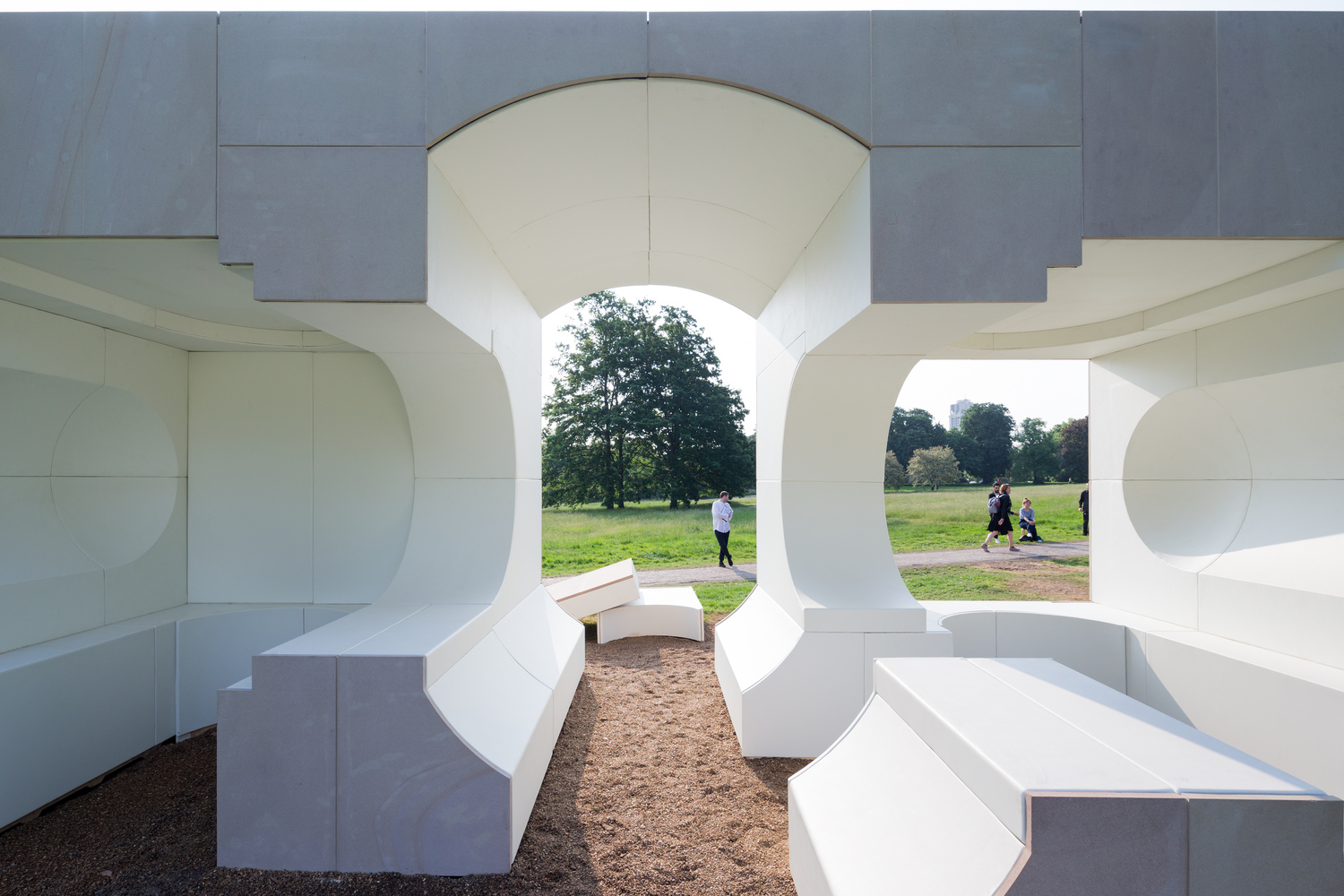 Barkow Leibinger’s summerhouse takes inspiration not only from Queen Caroline’s Temple, but also from a now-demolished second summerhouse, which once sat on top of an artificial hill nearby. Using a rotating mechanism, this pavilion was able to provide 360-degree views of the park, and in response Barkow Leibinger have created a “summerhouse in-the-round,” with undulating bands of plywood coiling together to provide views out to the park on all sides. 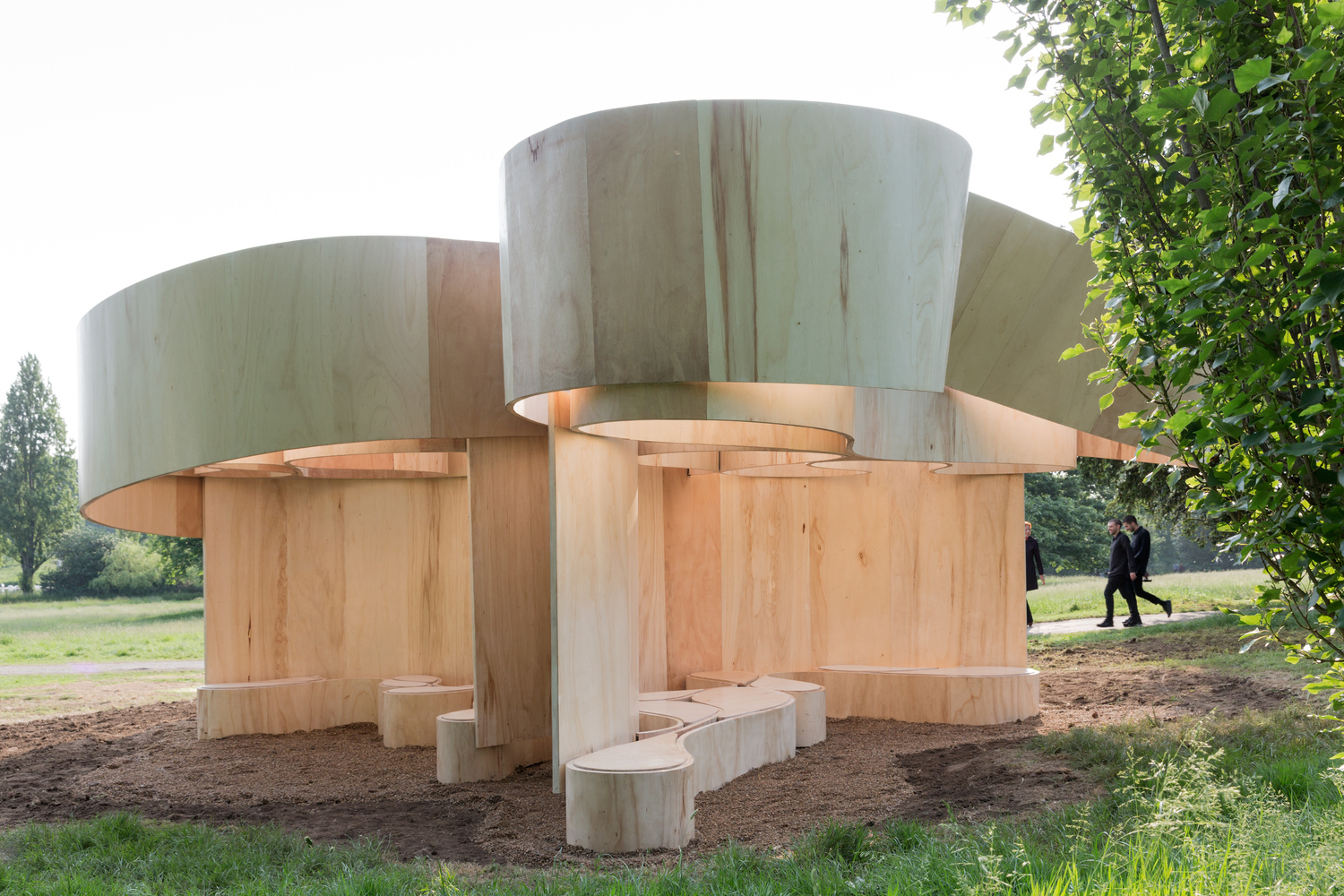 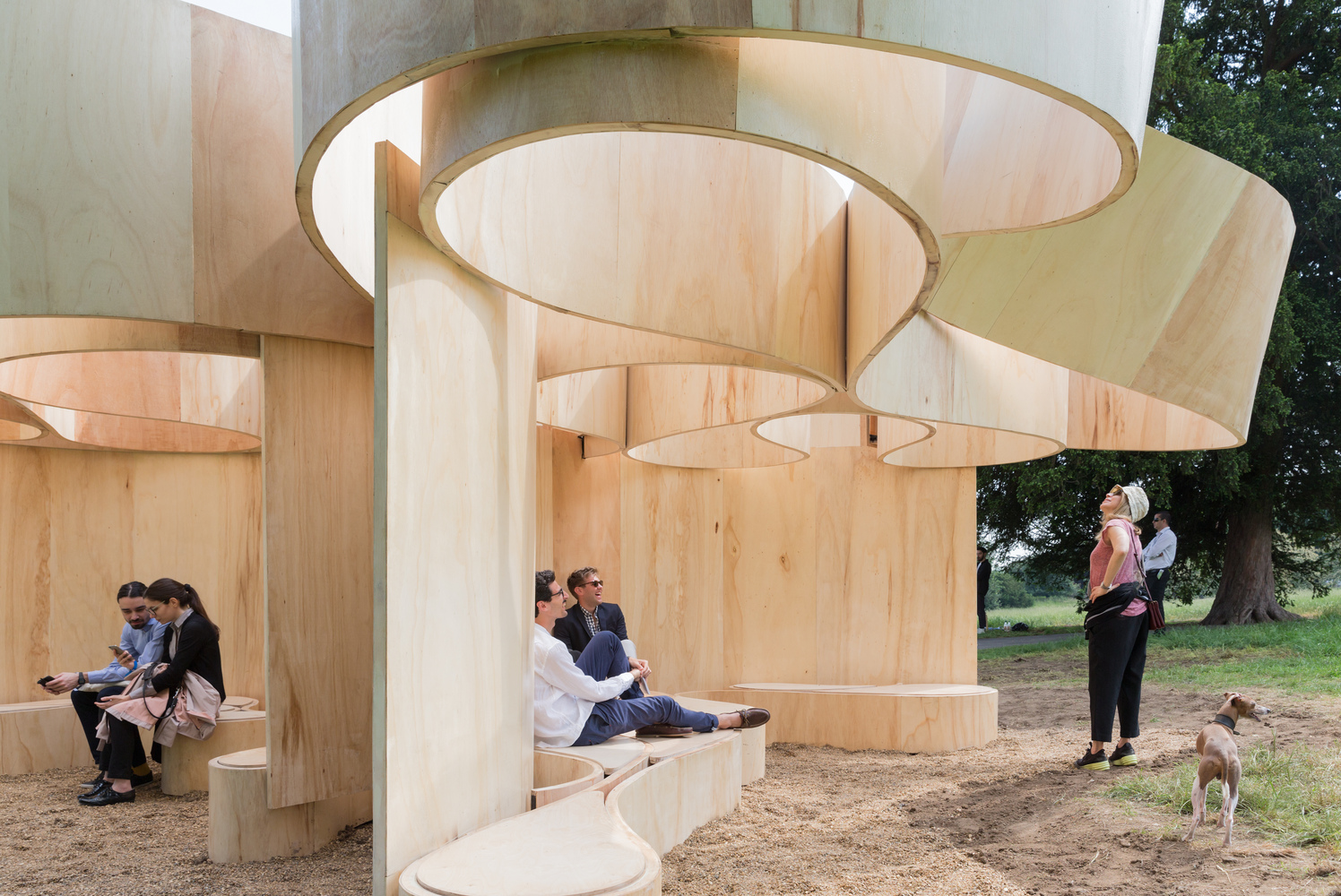 Yona Friedman’s design for the summerhouse builds on his famous proposal for La Ville Spatiale, a conceptual design that he proposed in the 1950s and has worked on throughout his career. The 30 1.8-meter cubes, made with 16 millimeter thick steel tubes, recall the modular design of La Ville Spatiale in which people would have been encouraged to construct their own dwellings within the framework of a monumental megastructure. In the case of the summerhouse, these cubes instead support polycarbonate panels upon which exhibits can be mounted – making the design “essentially a movable museum and exhibition.” 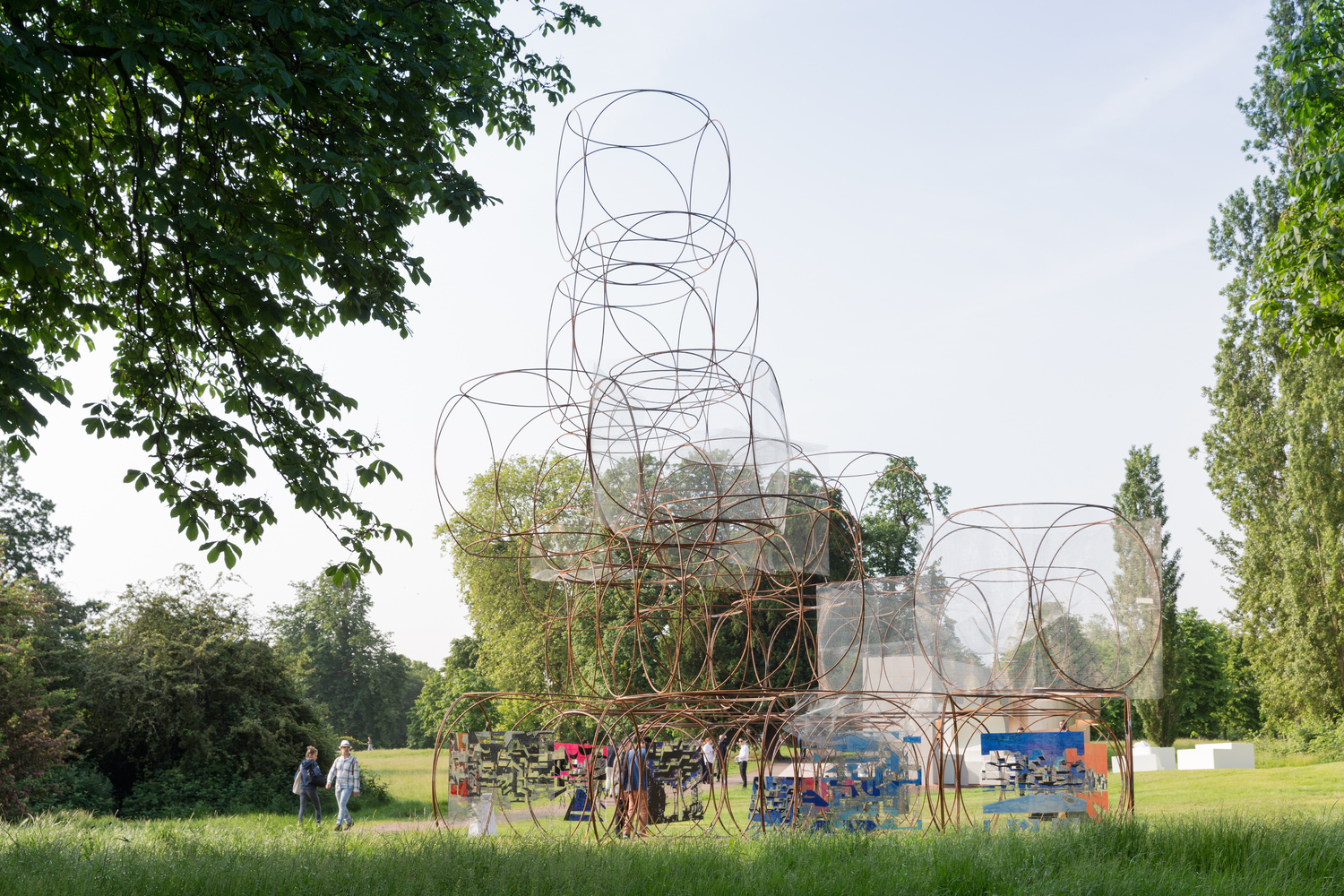 In the design process for his summerhouse, Asif Khan analysed the sun path around Queen Caroline’s Temple and realized that in the original design, the building was oriented to face the sunset on Queen Caroline’s birthday. This effect would have been amplified by the sun’s reflection off of the Serpentine lake – but that effect was destroyed by the construction of the bridge constructed over the lake in 1826. As such, Khan’s summerhouse includes polished metal plates, surrounded by timber staves which “unpeel” to create entrances. 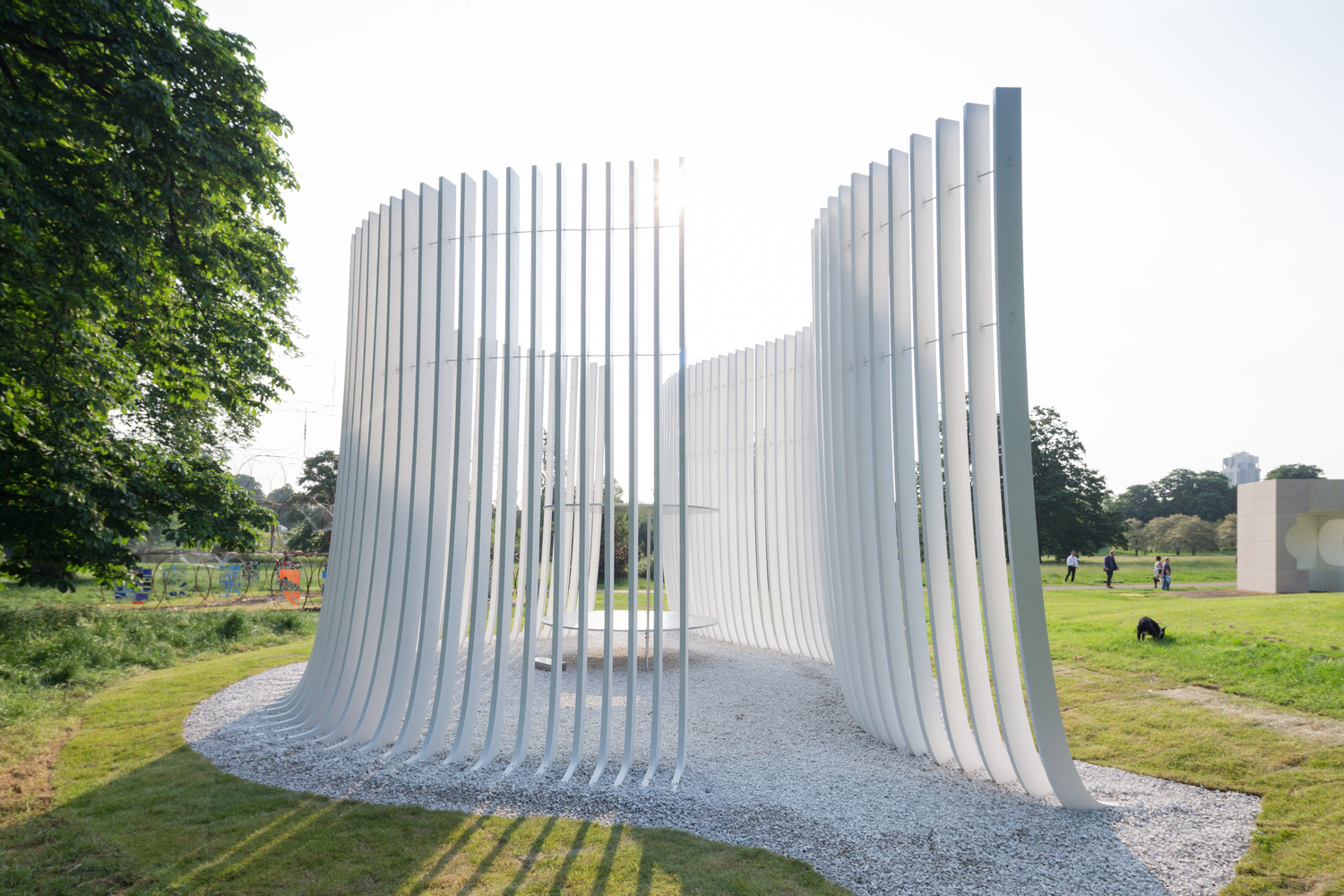 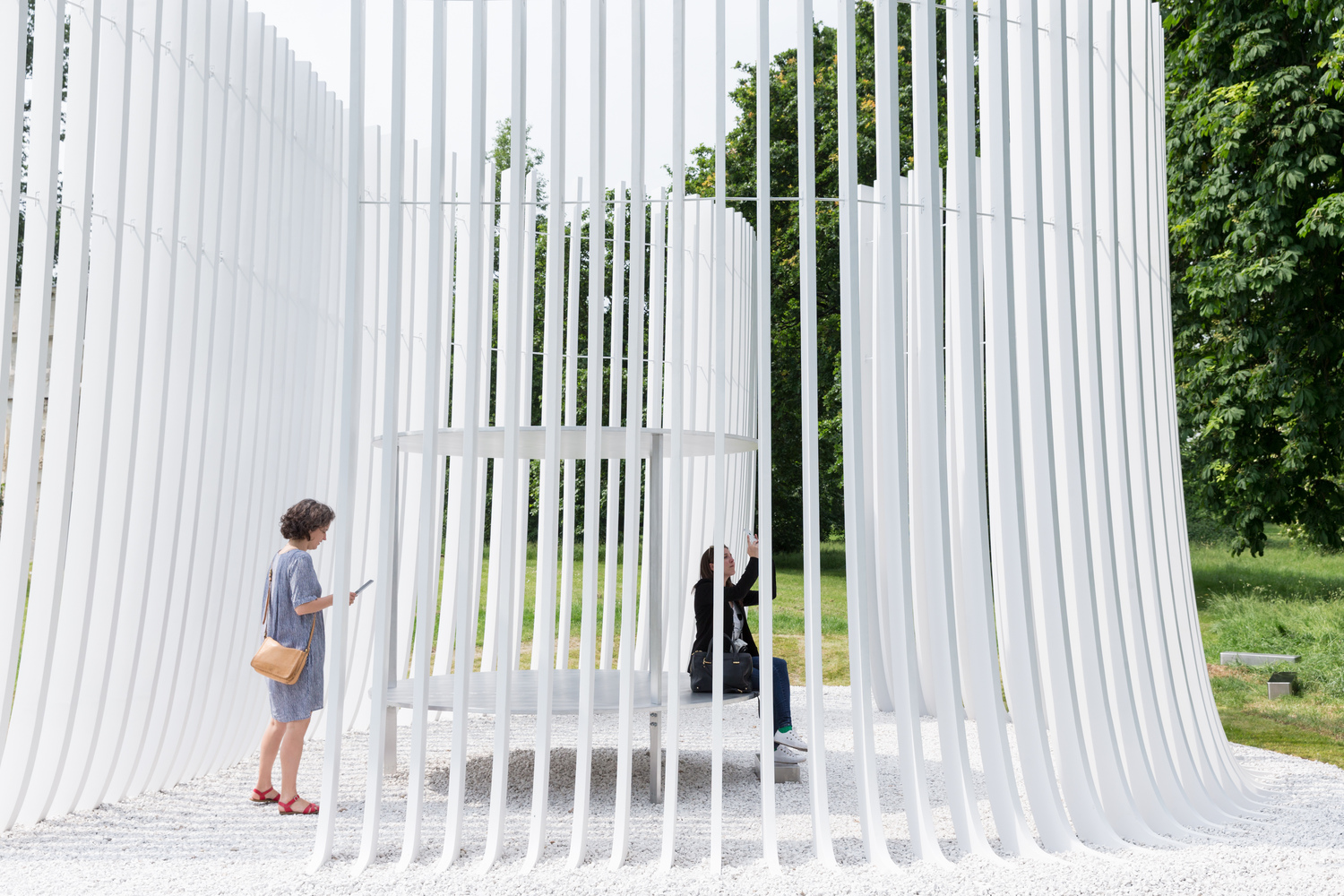