As the white winter sun poured into Gaspar Saldanha’s cloud-level window in Manhattan, the grandson of Paulo Werneck, artist and artisan of mosaic to Brazil’s most iconic architecture, the younger designer told the story of his famous relative. As he talked, I was soon diving like a Minoan mosaic swimmer into a warm azure and […]

As the white winter sun poured into Gaspar Saldanha’s cloud-level window in Manhattan, the grandson of Paulo Werneck, artist and artisan of mosaic to Brazil’s most iconic architecture, the younger designer told the story of his famous relative. As he talked, I was soon diving like a Minoan mosaic swimmer into a warm azure and royal blue Paradise.

Paulo Werneck, the man credited with inventing Brazil’s Modernist mosaic aesthetic and re-introducing the art to his country, brought lightness and spatiality to architecture, as did Oscar Niemeyer who often collaborated with him. The two notably introduced playful and bright expressions into crowded, industrial urban environments, inventing new definitions for public buildings unseen before.  Werneck’s aesthetic was informed by both nature and technology: undulating underwater and air currents and clouds like you’d see in “The Jetsons” intersect the modern geometric art influences of Calder. Like Corbusier, Werneck was a painter first and so the language of impressionists, the pointillism of Seurat, the lyricism of Picasso, the pastels of Puvis de Chavannes, and the magic of Dubuffet were all channeled with a heavy dose of Brazil’s unique flavor to help define the country’s modernist movement from the 1940’s through the 1960’s. But the artistic sensibility of Latin  American  social movements are at play here too.

Unfortunately for most of us, the South American mosaic tradition of the Mayans and Pre-Columbian Aztec masks are excluded from our visual memory of mosaic. We see the 4,000 year history of the medium as a time-lapse mosaic of Euro-centric images, patterns and scenes from Egypt, Byzantium, Greece, Roman, Renaissance cathedrals, Islam and more recently from Gaudi to outsider artists, Raymond Eduardo and America’s Isaiah Zagar. Werneck’s revival of this tradition and the current revival of interest his work, may well help us to flesh out that history. He is Brazil’s bridge between the spirit of the land and modern life, as a video by Vivian Ostrovsky, a famed filmmaker, brilliantly illustrates the natural patterns and colors of a Brazil meeting the modern world, which was the basis for his patterns.

What is fueling this revival? It is a three-part resurgence through a retrospective exhibition, the opening of a New York atelier by his grandson, and a home collection based on Werneck’s designs. 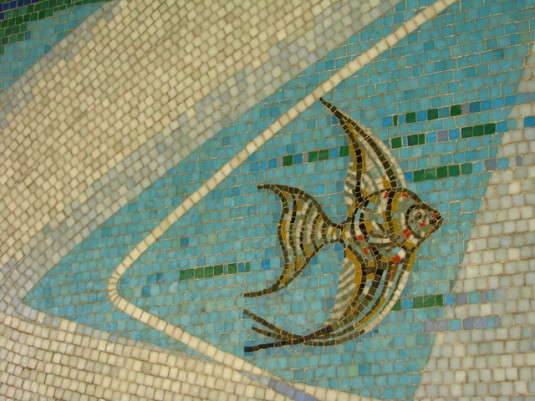 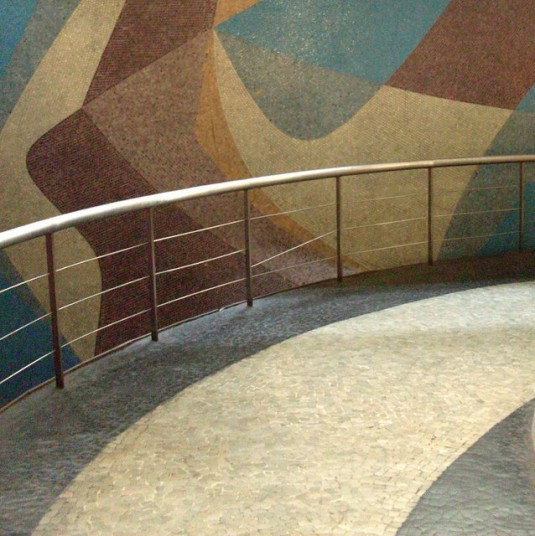 Opening on August 23rd in Brasilia, the exhibit “Paulo Werneck- Muralista Brasileiro”, runs through October 23rd at the State Art Gallery, Caixa Cultural.  It will show a progression through the Werneck archives, lovingly curated and collected by his granddaughter, the artist Claudia Saldanha, director of Parque Lage Visual Arts School and professor of art history at UERJ. Projecto Paulo Werneck is spearheaded by Paulo’s daughter Regina, and grandchildren Claudia, Paula, and Gaspar and is the main force for preservation and research into the legacy of this artisan. Along with the site Gaspar put together and his intentions to bring the show to the US, a rich portrait and history of the man and his works will continue the conversation and solidify his status as an important contributor to modernism.

Paulo Werneck  (1907-1987) was born in Rio de Janeiro. In 1914 he entered primary school with future architects and colleagues, Marcelo Roberto and Oscar Niemeyer. By his late 20’s he was illustrating newspaper articles and children’s books. This led to work with architects, first as a technical illustrator and then as a self-taught muralist, contributing his murals for the projects of Oscar Niemeyer, Marcelo and Milton Roberto, Mauricio Afonso Eduardo Reidy, Marcelo Campelo, Ruben Sierra, and Firmino Saldanha.

With his art, Werneck became the link between the natural and the national.  He is the bridge between the South American mural tradition of Rivera, Siqueros, Cândido Portinari, and Orozco and modern architecture, sparked by Le Corbusier’s famous visit in 1936, which impacted an entire generation of young Brazilian architects. “Whenever I can, I think in national terms,” Werneck once said, “The Indians, our roots, nature.” His leap “beyond décor” into new forms of social urbanism, was strongly influenced by Corbusier’s suggestion that the best applications of adornment in a modernist sense are ”a cooperation between architect, sculptor and painter.”

A pioneer in non-geometric abstraction, Werneck also pioneered a quality of production with tiles, the use of glass and ceramic techniques, and the invention of his own tools. This conceptual artist working in his hands-on artistic atelier refined and combined bold, radical shapes and colors, not easily found in the Brazilian art of the 1940’s. His output fits easily into our current craze for craft and inspiration, explaining, in part, the resurgence of interest in Werneck’s work.

He made his first mosaic panels in terraçojardim for the roof garden at The Brazilian Institute of Reinsurance in Rio, with the project architects Marcelo and Milton Roberto. His first abstract art in public place was in 1942 with the first murals of Sao Francisco de Assisi Church in Pampulha designed by his old school chum, Oscar Niemeyer, followed by seven murals for the terrace of the Brazilian Reinsurance Institute.

In 1946, Werneck contributed two panels for an important project by Oscar Niemeyer: the headquarters of the Boavista Bank in downtown Rio de Janeiro. This commission was important for its new aesthetic applied to a bank headquarters and was followed by an invitation from Ruben Serra, architect of Banco do Brasil, to design and complete several murals in different Brazilian cities. By the 1960’s demand for Werneck’s work increased and he expanded his atelier. Later work was less illustrative and more pattern-based, wrapping architectural forms like wallpaper. 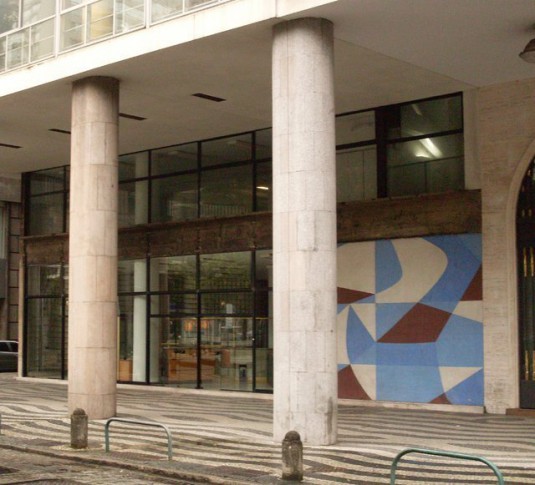 In 2001, Claudia received a phone call from a friend, who worked at General Cultural Heritage Department (DGPC) about a pending demolition of a Werneck project, which spurred her into action for preservation. After this, 43 murals were registered as national heritage in Rio de Janeiro at the family’s request. In 2004, the creation of the Paulo Werneck Project and launch of the artist’s website generated an intense exchange of e-mails with people throughout Brazil.

As children, both Claudia and Gaspar watched their grandfather create mosaics on the vacation house Marcelo Roberto designed for them on the island of Paqueta, which was granted landmark status in 2001. This history comes alive ten years later, with Gaspar’s introduction of Paulo Werneck Décor based on the mosaic designs. The line offers limited edition reproductions and adaptations of Werneck’s original patterns. Gaspar’s expertise in surface design, from his history designing for Kenneth Cole, Geoffrey Beene, and his own collection sold at stores such as Barneys, Saks, and Bergdorf Goodman, plus his natural heritage ensures his passion and adherence to Werneck’s line work, color, and texture. Products offered include custom mosaic installations and the licensure of rugs, wallpaper, furniture and lamps made in Brazil and the US. “The dream is to realize perfection in the mosaic technique and work with communities in Brazil to provide a good livelihood enriched by the revival of an artistic tradition,” explains Gaspar, in his skyscraper home, while surrounded by Paul Werneck’s perfect gouaches, tiny precious 1960’s era cocktail tables, topped by playful mosaic islands of blue sea and earthy sands along with his own vibrant color boards for ceramic tiles and rugs. 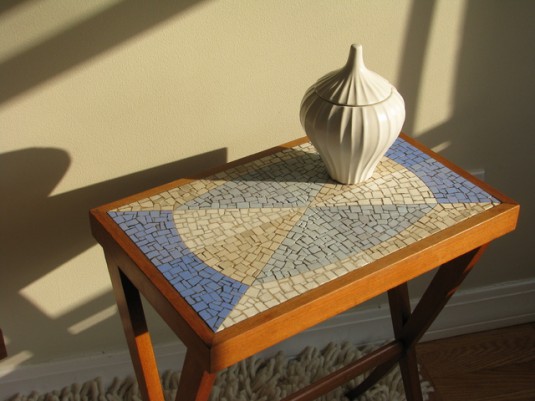 Down the elevator from Gaspar’s visionary perch, I traveled back to the sidewalks of noisy Manhattan, grateful and refreshed with my dive into the work of an artisan who, tile by bright tile, gave character and a historic stamp to Brazil’s major metropolis and its legacy of modernist design innovation. With Gaspar’s American enterprise coupled with his grandfather’s lighthearted designs, this next generation of giving to the public shines a little more light expanding the visual history of mosaic through the ages to include the importance of the South American tradition and the re-birth of interest in Brazil’s master, Paulo Werneck. 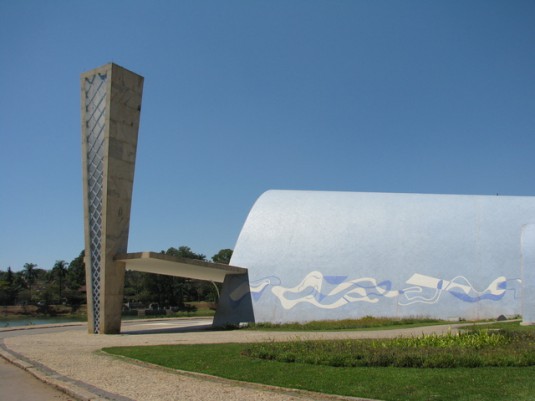 JADE DRESSLER is a curator and consultant for consumer brands and private clients on art and design, from content to exhibits, from interiors to clothing collections and has a habit of spawning art interventions in far-flung locales like Portal do Sul on 10,000 acres in Brazil or urban Milan with the Green Provocateur project.

PAUL CLEMENCE is an award-winning photographer (http://paulclemence.com/) who has been shooting most of his life. His work can be seen in exhibitions as well as in major design and lifestyle publications. Over 400,000 people visit his his Architecture Photography Facebook page.