The Activist Generation Changes the Face of the Favela

A young tour guide demonstrates the vital culture of his community, a teeming Sao Paulo favela.

Favelas are subject to a host of stereotypes and misconceptions from the outside world. Yet, these misunderstood places are home to some 11.4 million people in Brazil alone. Today we detect a hopeful sign for positive change, lead by a brewing youth movement that seeks to improve these forgotten places. Previously, we profiled a 16-year-old girl who is changing her favela of Real Parque for the better. Now, we present the story of one young activist and how he’s changing his community in Paraisopolis, another of São Paulo favelas.

Higo Santos de Carvalho is Paraisopolis’ tour guide and cultural ambassador. He’s 22 and hails from Salvador but has also lived in Simões Filho and São Thomé das Letras. Tragically, a degenerative disease took his father when Higo was only 14. Today he lives with his mother and sister in Paraisopolis, one of the city’s largest favelas with a population of around 100,000 inhabitants. Due to its size and its relative old age this particular favela is well developed. Most of its winding streets are paved and the houses are made of red brick, typical to region. There is a large school complex that includes a swimming pool as well as local restaurants, bars, and stores.

Raised by a foster father who died four years ago, Higo spent most of his formative years in the local school system. It was there, in school, that he became socially active and began to get involved with political and community-based projects. And there he also met like-minded young people, as motivated as he is to change the living conditions of their community. Today, Higo and his group run the Residents and Trade Association of Paraisopolis, a major representative entity for their favela’s residents. 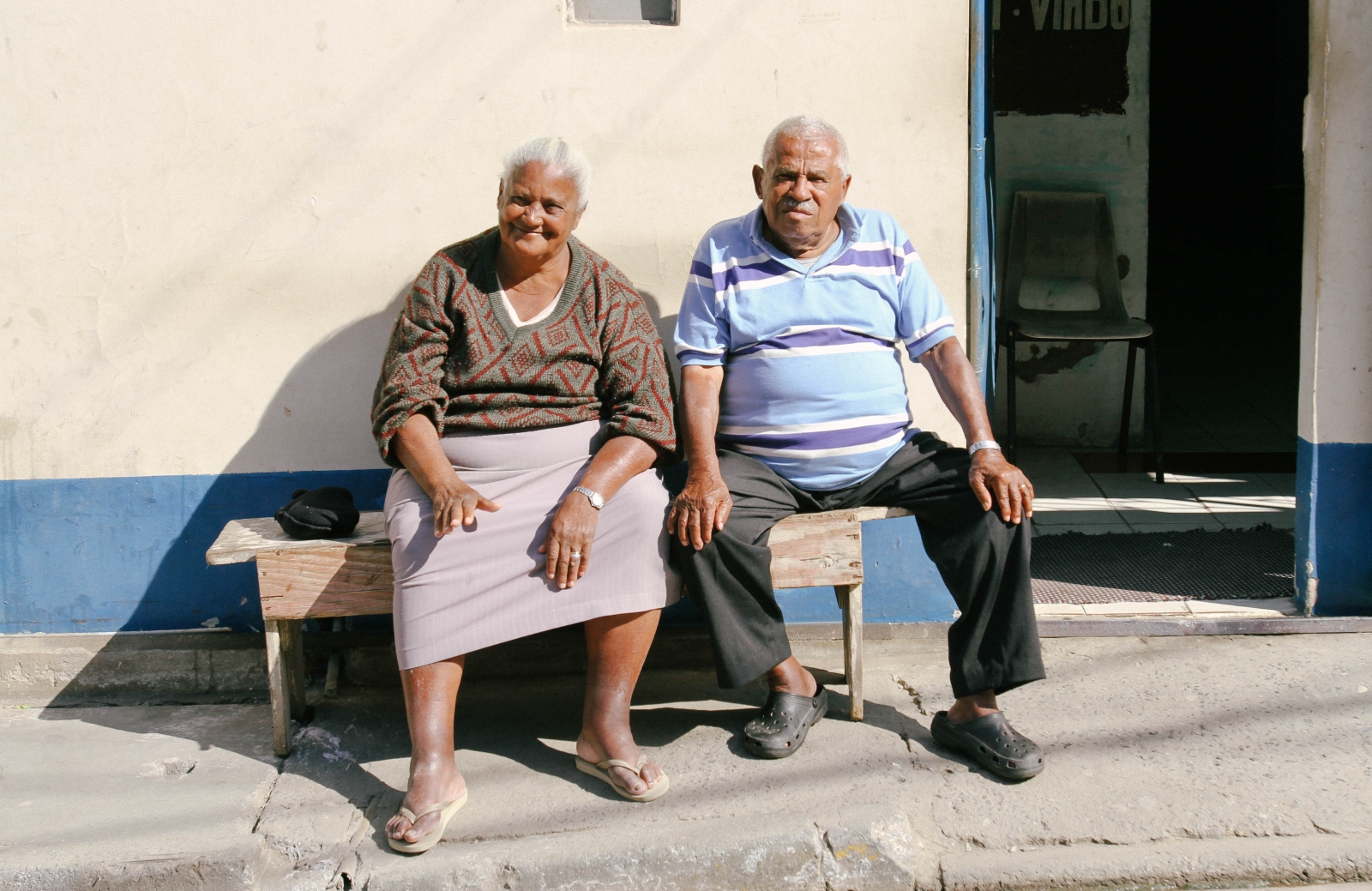 “Something I love most are the people in the community,” he says when we ask what motivates him.  “I think this makes Paraisópolis have something different; a ‘who’ that other communities don’t have.”

He met Gilson Rodrigues, the respected community leader and the president of the Residents Association in Paraisopolis, who suggested that Higo become a tour guide and show people the true face of their town. The program,  called Paraisopolis of Arts (Paraisópolis das Artes), aims to display the vibrant culture that exists there.

Higo makes sure visitors don’t get lost on the winding streets, stay safe, and get to see a balanced view of the community. He is careful to show both the good and the bad. “I show what is good within the community and what still has to improve because there are poor parts and people at risk. People need to know this community and share our story. The potential that exists here should be disclosed,” he tells us.

This favela guide is aware that outsiders think of his home turf as a place rife with crime and drugs. These stereotypes, he believes, come from films that show favelas in the worst possible light. 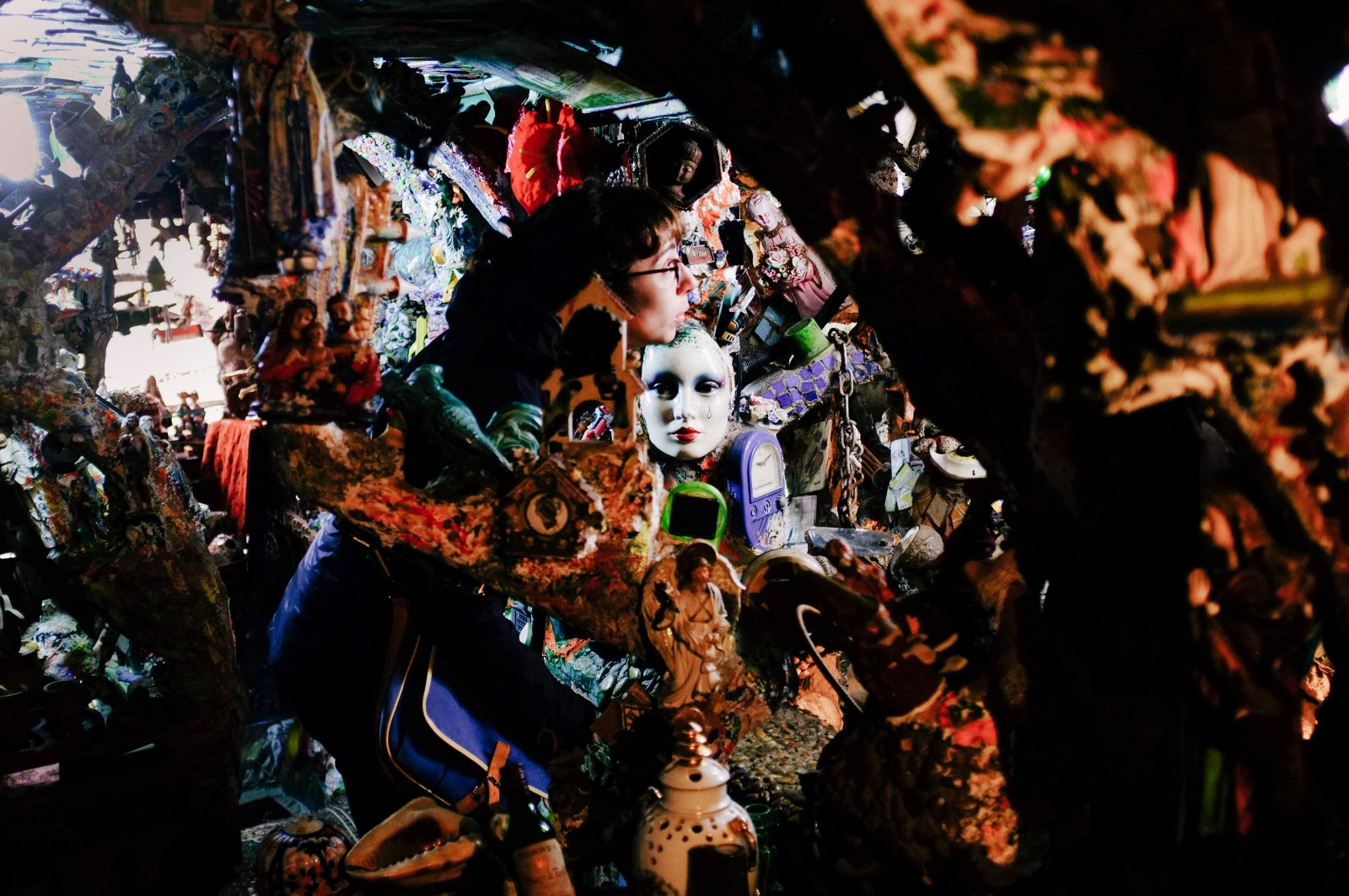 To demonstrate the vitality of his surroundings, Higo shows off “Antenor,” the home built from PET bottles—both a working household and a piece of art. He also shows ‘”Gaudi Paraisópolis.” Known locally as Castle Rock, this mind-boggling hand-made house inhabited by the artist and his wife, closely resembles the work of Gaudi, the Spanish architect. Its walls are constructed of cement plastered around chicken wire forms. The three-story building is completely spackled with found objects. These diverse adornments include mobile phones, action figures, masks, stones, and pottery that cover every square inch of the building. The climb through a web of bizarre ephemera culminates in a rooftop garden with a glorious panoramic view of the neighborhood. 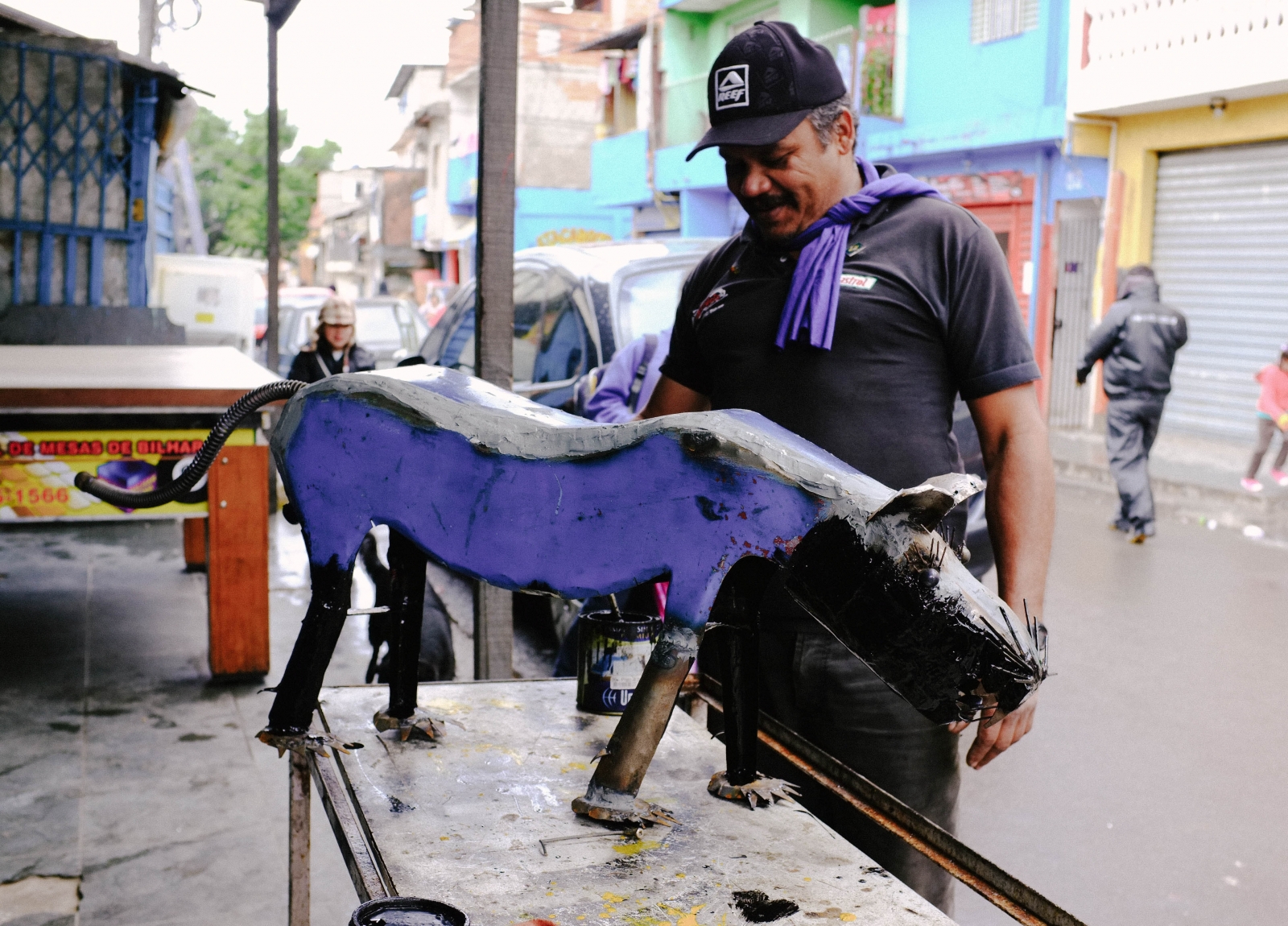 Another stop on Higo’s tour is at the work of Berbella, a local mechanic and blacksmith who builds objects from old mechanical parts. His workshop is filled with a variety of animals and figures fabricated from leftover cogs, gears, and pipes. The favorite of the local kids is a large crocodile on wheels that they can ride all over the yard. In addition, Higo proudly shows off Paraisopolis’ popular ballet school and a renowned orchestra where young children learn art and music. 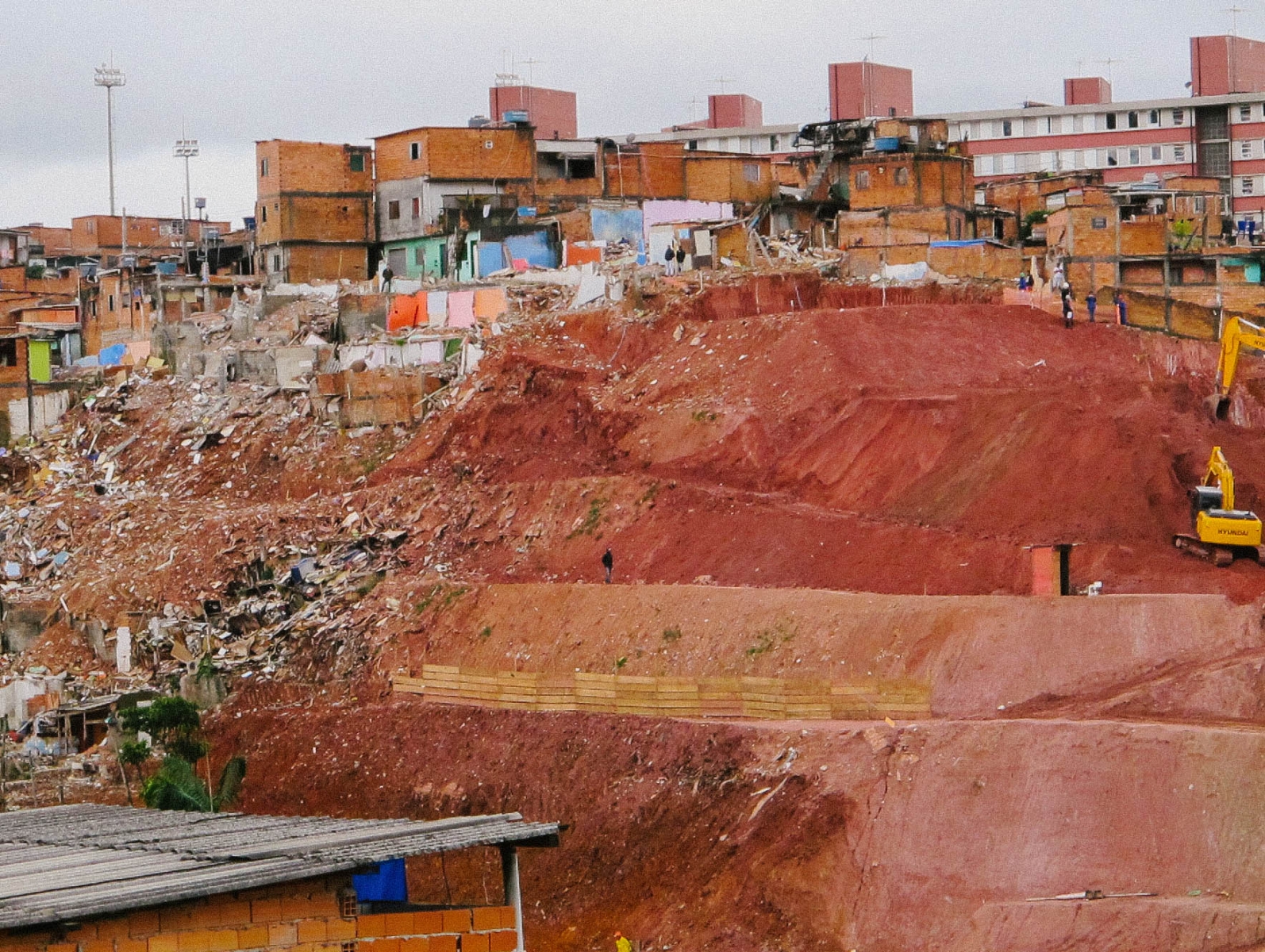 Every day, their surroundings remind the people of Paraisopolis of their sad status within Brazilian society. The nearby luxury apartments and homes of Morumbi house São Paulo’s wealthiest people. Despite this seemingly insurmountable contrast, Higo has seen tremendous growth and change within his community. When he first arrived as a young boy, Paraisopolis had dirt streets, illegal electricity, and no running water. Now there’s a new paved avenue that winds through the town and is the main vein of activity. Residents have infrastructure for running water in their homes and receive electricity bills through the mail.

But Higo feels that the people of Paraisopolis still have much more to achieve. He hopes to see hospitals, better schools, and jobs pop-up around his community in his lifetime. With so much activism in this place, including Higo’s, he believes change is coming: “Little by little, we are transforming the community into a neighborhood with all the structures that its citizens deserve.”

Meagan Durlak is a design strategist and systems thinker who believes that good ideas are dependent on their ability to be embraced by those that matter most—the people on the other end. As a designer, Meagan has explored her creative approach in unique settings ranging from an innovation center, a museum, to a ministry within government. As a Masters student of the Transdisciplinary Design program at Parsons, she has become something of a complexity enthusiast and an advocate for the power of design to bring clarity to knotty problems. Designer, strategist, social innovator, creator, maker—call her what you want, because regardless of the title, she loves what she does.

James Frankis designs systems, experiences, and services that make impactful change. He uses his personal lens of science and coding to bring logical analysis to the design practice. These skills help to maintain complexity, define narrative arguments, and ground projects. James is working on an MFA in Transdisciplinary Design at Parsons where he uses the methodologies of design thinking, prototyping, and co-design to empower communities and build resiliency.