Al Jazeera’s European HQ Adapts to Life in the Shard

The designers behind the media network’s new London newsroom studio had to work around a major design obstacle—Renzo Piano’s architecture. 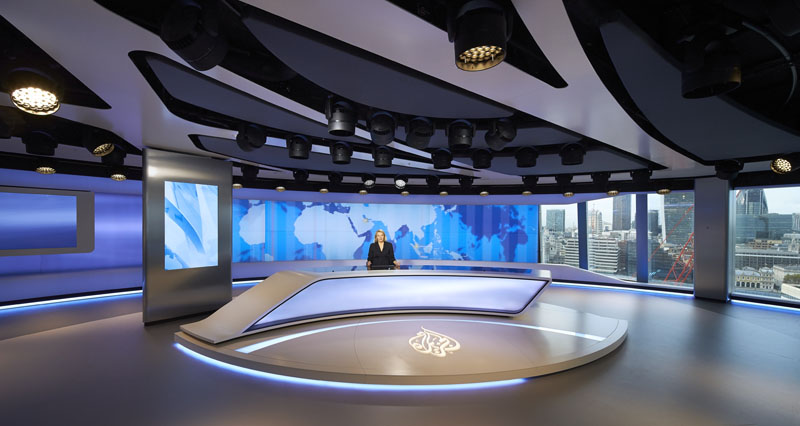 The designers behind Al Jazeera’s new London newsroom studio had to work around a major design obstacle—the architecture of the Shard.

The Shard, Europe’s tallest building, has a new tenant. Since October 2014, the Qatari-owned building has been home to Al Jazeera Media Network’s European headquarters. The news organization moved into the 87-story tower’s 17th floor. The relocation is eyebrow raising for three reasons: logistics, ceiling heights, and glazing.

Typically, news broadcasters base their live studios in a purpose-built black box within a warehouse, and other staff members are installed elsewhere. But in the Shard, the studio, newsroom, office, storage, green room, and equipment rooms are all on one 29,400-square-foot floor. And because Renzo Piano originally designed that part of the building for office use, the ceilings are a mere nine feet high—TV studios normally require a minimum height of 14.8 feet to accommodate lighting rigs. Couple that with ubiquitous floor-to-ceiling windows, and the designers had plenty to challenge them.

JMP’s solution was to cluster the control rooms, edit suites, and makeup and green rooms around the building’s core. The spaces that would benefit from natural light hug the outer wall. To unify the areas, JMP introduced an embedded ribbon device on the ceiling. This, explains JMP director Kevin Lloyd, “visually takes you on the journey” from the reception area and around the floor.

While the facade gives desk workers daylight, it was a headache in the live studio. “Most TV studios don’t have live camera views through a glass facade on this scale,” says creative director Stuart Veech, so the task was “to balance the ever-changing light levels due to the seasonal and daily weather cycles.” To do this, he incorporated Plexiglas with a polarizing filter laminate into the glass facade.

For that low ceiling, Veech x Veech integrated lighting within the complex network of structural beams and acoustic panels. Unusual for 24/7 news, the lights are seen on camera. “The result is that the space has a strong cinematic expression,” Veech says.

The design is a template for future Al Jazeera offices around the world, starting with the relocation of its Washington, D.C. operation to New Hampshire Avenue this month in a space designed by Bruce Lawson and Jack Morton. Al Jazeera viewers may not appreciate these efforts, but it must be a welcome change for the network’s employees in London and beyond.

John McAslan + Partners used the sweeping forms in the ceiling and furniture of the new Al Jazeera offices to counteract the angular design of the Shard.