An Animated Rundown of the ABCs of Architecture

An animation showcases the world’s most influential architects.

The Argentinean blog Ombu Architecture recently posted a wonderful animation that shows off, in alphabetical order, some of the world’s most influential architects and their greatest works. “The ABC of Architects” begins with Alvar Aalto and runs all the way to Zaha Hadid, bouncing through the list in a playfully minimal style.

The ABC of Architects from fedelpeye on Vimeo.

In the animation, each building disappears almost as quickly as it appears, but by reducing them to their most basic elements, the buildings become instantly familiar. When the video ends, don’t be surprised if you find yourself starting all over again. There could only be one architect for each letter, so a few important names have been noticeably omitted– Gaudi is dropped in favor of Gehry, Louis Khan is featured over Louis Sullivan. And as the video gains traction on the Internet, it is beginning to stir up some healthy discussion on the importance of each architect relative to those left out. On the upside, there’s sure to be plenty more material to pick from if a part two is ever in order. 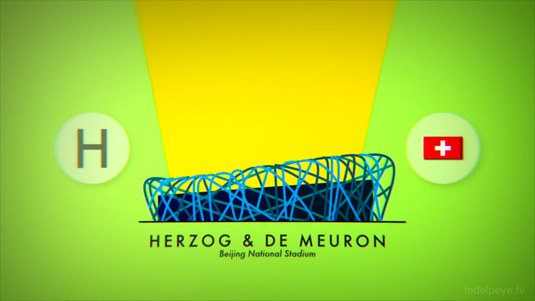