The Architectural Flythrough Is Becoming a Potent Promotional Tool 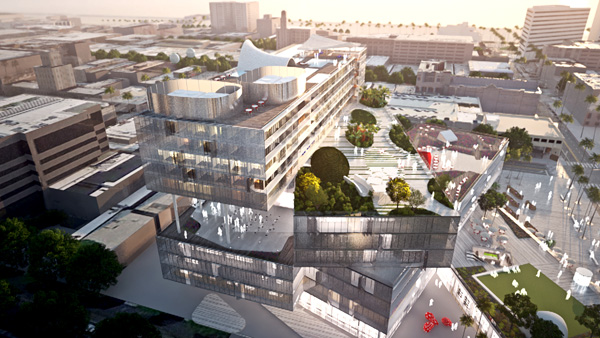 Brooklyn Digital Foundry recently collaborated with OMA, creating both still images and a video for the firm’s winning proposal for a mixed-use development in downtown Santa Monica.

Among the many slick renderings that inundated the blogs this year were the sunlit images of OMA’s winning proposal for the Plaza at Santa Monica—a skewed stack of glass boxes at an important intersection downtown that won the enthusiastic approval of the city staff who organized the competition. But in August, the city council rejected the proposal, sending the city back to the drawing board. Such, for better or worse, is the fate of many meticulously crafted digital dreams today.

John Szot, the cofounder of Brooklyn Digital Foundry, the young media studio that created those images for OMA, thinks this removal from reality is, in fact, the strength of the medium. Working on both real proposals for high-profile firms and more speculative self-initiated work, Szot hopes to prod the profession in a more exciting—and culturally relevant—direction. “We see a different future for media in architecture,“ he says, “one that’s heavily steeped in the human experience, as opposed to a formal exercise.”

Szot began providing digital services—websites, renderings, animation—long before starting at Columbia University’s graduate program in architecture. Subsequently, he cofounded the Foundry in 1999 with Brian Lemond, a former senior art director at New York City’s Guggenheim Museum. “As computers become more powerful, many of the things that clients looked to us for, like, ‘Can you get concrete to look like concrete?’ will become irrelevant,” he says. “What architects come to us for is a kind of visceral impact. We’re trying to do that without literally putting together their building brick by brick. It’s more about the magic of cinematic thought.” 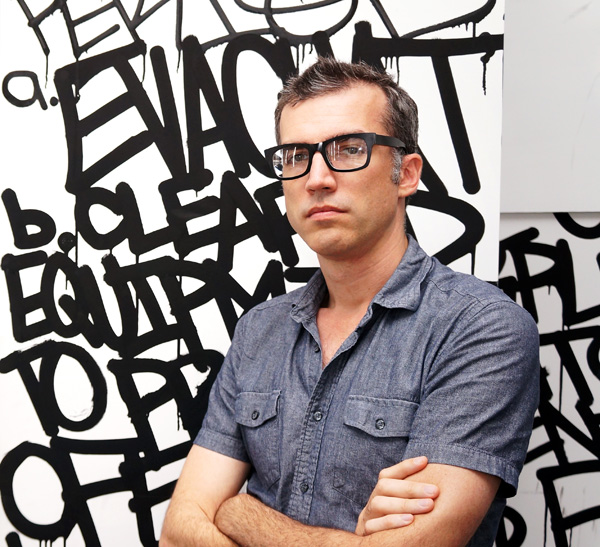 John Szot directs expressive films about actual building designs, but he is also developing a trilogy called Architecture and the Unspeakable to challenge the profession with ideas usually beyond its purview.

The architectural video—one that is preferably less than two minutes long, to fit our social media attention spans—is Szot’s forte. “The unique thing about Brooklyn Digital Foundry,” says OMA’s Jason Long, “is that they blend a diagrammatic kind of animation with more conventional visualization.” In the case of the Santa Monica project, for instance, street-side panoramas were combined with energetic infographic sequences on how the various parts of the building come together and work for the downtown area. “It tells the audience how the building is going to solve their problems, and what it’s going to feel like when you’re in there,” Szot says. “Videos like this become very potent promotional vehicles.”

This kind of effectiveness has brought the Foundry an impressive roster of collaborators: Gary Hustwit and Swiss Dots Ltd. engaged the studio to create the graphics in the documentary Urbanized; Gucci brought it onto an architecture-inspired project, and has commissioned media for subsequent project launches; and firms like Diller Scofidio + Renfro, Bjarke Ingels Group, and Kieran Timberlake have worked with Szot on recent projects.

It’s certainly a tough playing field, though, for new enterprises. For one, rendering shops in Asia churn out images at an alarming rate. Secondly, both hardware and software evolve almost daily, in terms of capability (the dilemma these days is that websites built using the versatile Flash software, a staple at the studio, are not supported on iPads). In spite of this, Szot has his eyes set on the larger prize—fresh relevance for renderings. 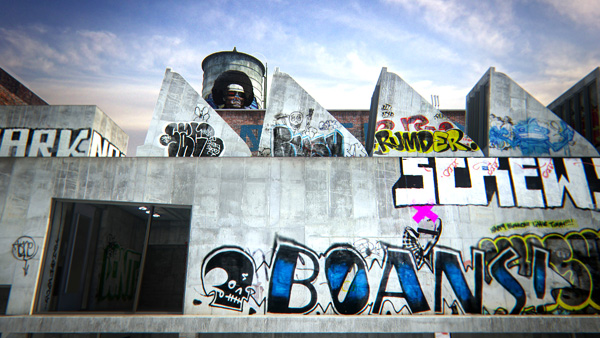 Architecture and the Unspeakable proposes a graffiti-covered structure for New York City.

“Architecture has always been hemmed in by practicality, which is difficult to argue against,” he says. “But I see filmmaking as a way of exploring ideas that might be a little outside of the acceptable range”—to reflect ways that human beings routinely experience architecture, but that architects rarely think about. Szot and the Foundry have created the first two films out of what he calls “a triumvirate of anti-architectural ideas.” One, a proposal for a building in Soho, New York City, is a thumping, rhythmic video that examines how graffiti, which is not usually considered the purview of an architect, might play significantly into our experience of buildings. The second, titled Idiosyncrasy, proposes a residential tower in Tokyo that translates the city’s frenetic pattern of urban development into an equally peculiar form of space planning. A proposed third film, inspired by Detroit, will ask how dilapidation might become a valid form of design expression. 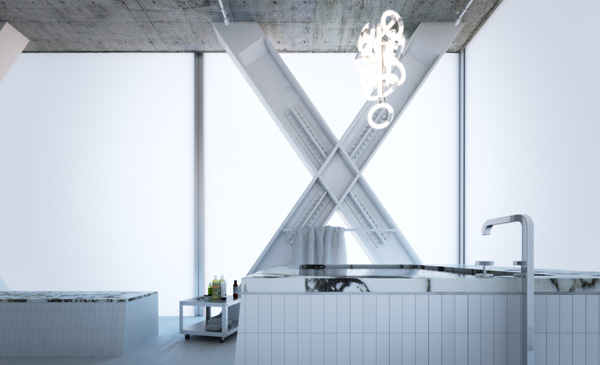 A tower for Tokyo, where each residence is both unique and idiosyncratic, is also considered in Architecture and the Unspeakable.

This mode of provoking design discourse through unbuildable visuals is a time-honored method—think of the Italian group Superstudio’s highly politicized collages from the late 1960s, or the incredible drawings by the legendary Lebbeus Woods. Szot’s contention is that the moving image is the next frontier, and will add a layer that’s been deficient in architectural representation—an expression of what it feels like to inhabit a space. “Right now, technology points towards formal possibilities and we’re still a little intoxicated by that,” he says. “The more common the technology becomes, the more prevalent that experiential dimension is going to be.”

The ability to present complex pieces of information in a rapid but easily digestible form is one of the Foundry’s strengths. A diagrammatic sequence from the Architecture and the Unspeakable proposal for Tokyo explains both the larger organization of the building and the assembly of small elements.