Alex Chinneck, artist and master of the architectural one-liner, has “built” a pair of inverted houses in London.

In the last twenty years, contemporary installation art has a displayed a marked tendency towards bombast. These kinds of public, urban-scale artworks assume the monumental proportions of the architecture that surrounds it, while blatantly eschewing its functional(ist), quotidian dimensions. They exist as permanent gesture, full of whimsy or spirit but little else. In the work of British artist Alex Chinneck, however, the installations often adopt the guise of actual buildings, only with a few quirks thrown in.

His latest installation, “Miner on the Moon,” fancifully inverts two neighboring London buildings so that their front doors are suspended in mid-air. In the manner of Magritte, the structures seem to have been flipped on their heads for no apparent reason. 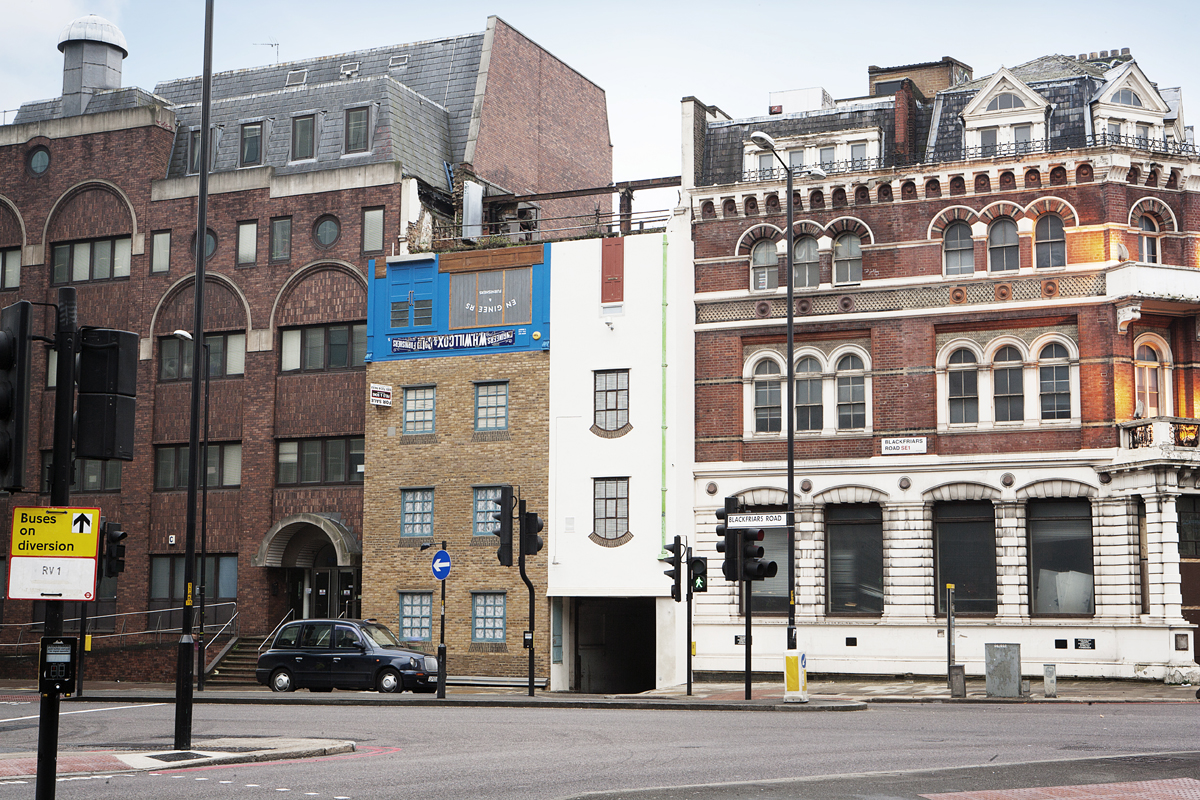 Chinneck is the master of the architectural one-liner that is “conceptual accessible” to anyone with a sense of humor.

Chinneck’s last project, “From the Knees of My Nose,” also employed surrealist imagery to memorable effect: an aging brick row house, one in a line of many, appeared almost inebriated, its manicured facade having come unhinged and slipped to the pavement. This wardrobe malfunction revealed the sorry state of the interiors, which had been left unattended for over a decade. It was funny, sad, and above all, impossible to miss.

In contrast, Chinneck describes “Miner on the Moon” as being “far subtler” than the visual slapstick of its predecessor. That is to say, you might walk right by the project and miss the joke. For his architectural illusion, Chinneck constructed a scaffold that he grafted onto the aging facade of the host building, a structure dating from 1780 and which once housed a livery stable. Using salvaged materials from nearby lots, he pieced together two new facades, each oriented 180 degrees from the sidewalk. They both painstakingly recreate the brickwork of older surrounding buildings, complete with flourishes typical of London infill architecture. There are skinny, arched windows, off-colored brick lintels, and vintage signage, the latter bearing the name of a local firm founded in 1876. 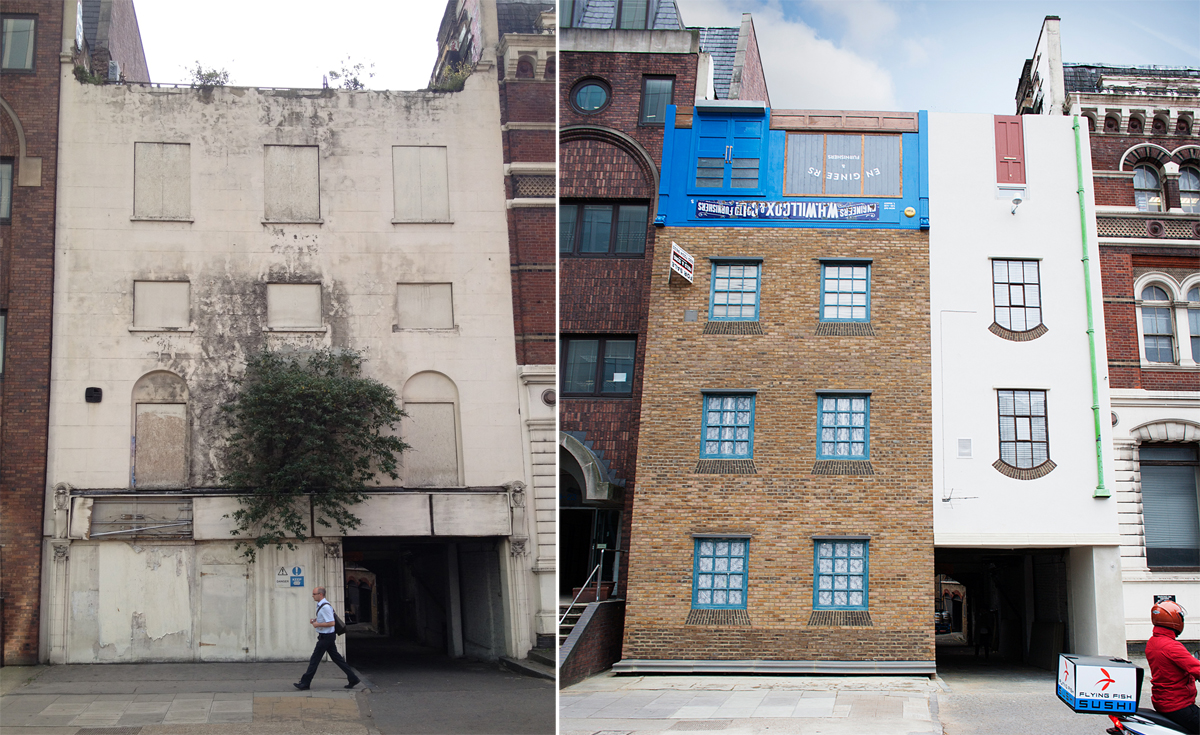 The project attached a brick veneer to an older structure that dates from 1780.

All these details help root the installation to the site, and apart from a lime-green drain pipe running along the length of the facade, it seems to blend into the streetscape. The bombast is dialed way down, so that the structure—a portion of which is inexplicably suspended several feet off the ground—becomes almost contextual. This was precisely Chinneck’s aim: as he explains, “by using the material and architectural language of the district, the artwork has the ability to disappear into its environment without dominating it.” 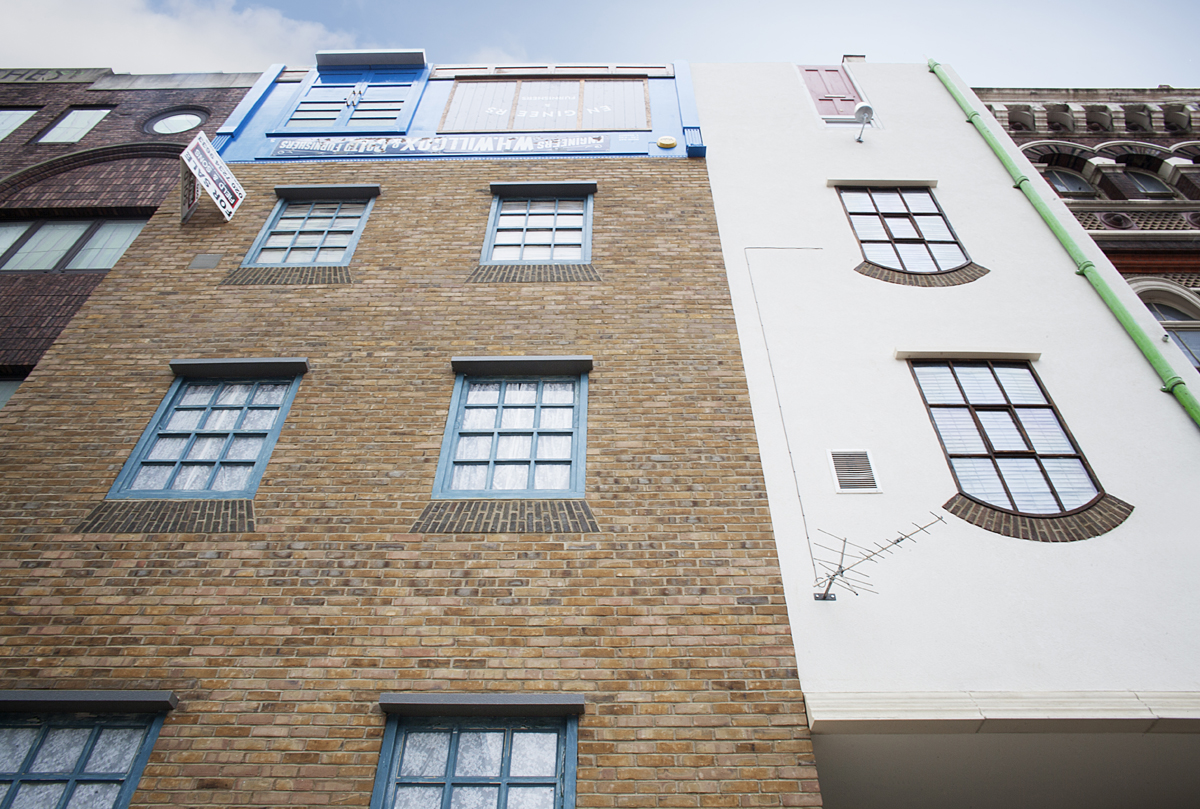 “Public sculpture,” Chinneck says, “has a tendency to forget its responsibility to the public so I attempt to make work that is free from intellectual elitism.”