South America’s first Bahá’í Temple required over a decade of research and development—without that time, this ambitious project would never have seen the light. 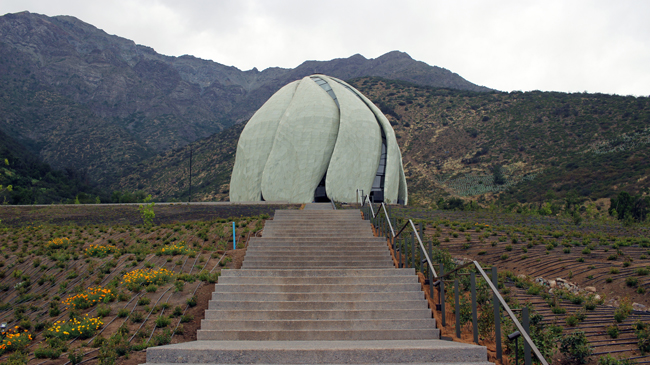 Founded in Iran in the mid-19th century, the Bahá’í faith is the most recent of the world’s independent religions. It encourages equality and world peace, promoting the idea that all “religions come from the same source… and shine the same light on humanity.” In fact, light—a powerful symbol for many religions—stands for the “oneness of humanity” in the Bahá’í faith.

The first Bahá’í prayers ever said in Chile were said in the Andes in 1919. Almost a century later, the Bahá’í Temple for South America stands on the foothills overlooking Chile’s capital city, Santiago. The temple, or House of Worship, as Bahá’ís call it, is comprised of a dome-like building structured by nine arching translucent sails, nine entrances, and a 15-acre garden with nine pathways and nine fountains. Nine, as the highest single digit number, is a symbol of completeness and perfection for the Bahá’ís.

After a ceremony with local authorities, diplomats, religious representatives (and a weekend of activities that gathered five thousand Bahá’ís from over 100 countries), the 30-million dollar project—funded through voluntary and anonymous contributions from Bahá’í members worldwide—is now officially open to the public “from Wednesday October 19 to forever.”

“There’s a beautiful quotation in the Bahá’í writings, which inspired the entire project,” explained Siamak Hariri, partner of Hariri Pontarini Architects, the Toronto-based firm that in 2003 won the open competition to design the temple, at the opening press conference. The passage in question describes a servant deep in prayer that, illuminated by his connection to god, transformed into “a pillar of light.” The idea that light could not only go through, but be truly captured, became essential to the design. The central scheme, then, was to build a double skin nonagon structure that could really “embody” light and, constructed with cast glass and translucent marble, be a “triumph of engineering and material innovation.”

“Up until now, we’ve had temples with vast windows and very little support system, but we have never before had a temple designed that was literally, entirely, open to light,” notes Douglas Martin, former member of the Bahá’í House of Justice—Bahá’ís supreme governing body—and a jury member during  the temple competition.

But Hariri—a Bahá’í himself familiar with the religion’s scriptures and temples—had a second source of inspiration: the Bahá’í House of Worship in Wilmette, Illinois, also known as the Temple of Light and Unity. Built between 1921 and 1953, Wilmette was the first Bahá’í mother temple in the Western Hemisphere. It was, oddly enough, also designed by a Canadian Bahá’í architect, Louis Bourgeois, who similarly won a competition for the design.  It was precisely after its completion that Shoghi Effendi, head of the Bahá’í faith at the time, announced the plan to build a temple for each continent. It was also in 1953 that he designated Chile as the site for the South American Temple.

Hariri had “always loved” the Wilmette temple, especially its cupola; he wanted the the temple in Santiago to be a “sister temple” to the one in Chicago. So, it was only logical for the team to visit Wilmette, where they were allowed to climb inside the dome. “We tried to capture the spirit of that temple, yet perhaps in a new way. That was our beginning,” said Hariri in 2003.

However, if in search of universality Bourgeois had brought in elements from different religious architectures, Hariri shied away from them completely. Still, both architects devised a structure made up entirely of “panels that embrace natural light during the day and illuminate from within at night.” And, in both cases the projects defied the craftsmanship of their time, requiring significant innovation and experimentation in materials and construction techniques.

Inspired by Bourgeois’ aspiration to “create something extraordinary,” Hariri strived  to achieve a “very deliberate intersection between the ancient and the absolute new.”

Despite the fact the temple’s execution required state-of-the-art engineering and technical resolution, Hariri insists that the “biggest challenge was finding the right site.” It was indeed an uncommon situation: in cases like this, land is usually a given for the architect.

A little more than ten years after the announcement of 1953, the House of Justice set the goal of acquiring new land in Chile for the future temple. By 1969, they had bought a rural estate in Lo Barnechea. However, when the announcement of the temple was re-launched in 2001, a visit to the site deemed it unsuitable, due to the growing urbanization and poor accessibility of the area.

The National Spiritual Assembly—the local Bahá’í organization—resumed the search and bought a 42-acre site in Linderos, south of Santiago. But this site was again dismissed in mid 2003, this time considered inappropriate by the recently appointed architects. So, the search continued.

By 2005, the project was presented with two options. On the one hand, there was a rural 217-acre foothill site in Colina, 35 minutes away from Santiago. On the other, as a by-product of conversations with Chile’s Bicentennial Commission, the government had offered the Bahá’ís 55 acres of the Metropolitan Park, located in the San Cristobal Hill, right in the middle of the city. And, while this option implied facing technical and administrative issues, what really concerned the Bahá’ís was the public uproar and opposition from various sectors, who questioned the government’s decision to benefit one particular religious party over another by offering public land in such a strategic location. This generated a discussion that was “unhealthy in the spirit of the project,” as Hariri explains, and the offer fell through. “But we couldn’t return to the outside after that,” says Hariri. They couldn’t, not after imagining the temple in relation to the city. So again, the search continued.

After dozens of sites and 3 more years, a local architect gave them a new lead. Hariri visited the prospective land: a site in the Andean foothills that offered a sense of nature and at the same time urbanity, since it was located on the mountains at the very edge of the city. It was part of a local alumni club. The architect was taken close to a pond; Hariri, however, without knowing the reason, started walking uphill. He climbed more than 1,640 feet. He stopped more or less where the temple stands today. Right there, all alone, he started shouting to the group down the hill: “Guys, this is it!” But they could barely see him, let alone hear him. “I felt the temple, I just tell you. It just felt perfect,” asserts Hariri smiling widely. The next day Hariri took Juan Grimm, the landscape architect of the project, to the site: “It’s perfect,” he agreed. After years of searching together, they had found the right nature-city balance. The Bahá’ís managed to buy over 200 acres of land (the temple and garden only use 25 acres). Now, construction could really start.

“We were shocked to make the shortlist,” said Hariri about the competition he eventually won, “we had only the beginnings of a concept.” And that early concept—which guided the whole process—meant a massive endeavor in terms of engineering, materials, logistics, and so on. After all, it was not only a glass temple in a seismic zone, but also a building that had two translucent layers cladding a steel and aluminum superstructure, about 100-feet in height and diameter.

To be more exact, it meant, among other things: 3 main rings; 18 curved steel columns with special brackets; over 10 thousand steel nodes and tubes of different shapes and sizes; over 18 thousand unique-shaped panels of water-jet cast glass and translucent marble; numerous bronze elements, such as doors, railings, grills, canopies and soffits; almost 2.8 miles of cable; 15 acres of landscaping with at least 1.2 miles of pathways; and a 0.7 mile paved access road. Add more steel and concrete for the basement and auxiliary buildings, plus glass and wood, as well as a tree-planting program including 8 thousand native species. Overall, more than a hundred shipping containers were sent to Chile, where everything was moved to the site, at least 3,200 feet above sea level. “They said it couldn’t be built,” affirms Siamak Hariri. Moreover, “many said it was going to be a runaway cost.” He was all the more pleased when, despite the passing years, they managed to stay within 3 percent of their original budget for the superstructure.

But that was not all. The seismic system required the help of three universities—from Chile, Canada and the US. The glass meant a four-year collaborative research with the Canadian glass artist Jeff Goodman (who died in 2012). The right vein of marble meant, first, finding a quarry in Estremoz, Portugal, and second, convincing the owners, who had been holding the marble in reserve for seven generations, that this was the perfect project. The superstructure meant establishing partnerships with companies, such as the U.S. engineering firm Simpson Gumpertz & Heger (SGH) and the Germany-based Gartner Steel and Glass GmbH. Between, architects, collaborators, artists, engineers, fabricators, constructors, and volunteers, the temple was certainly a multinational feat of collaboration: “This is jazz, you know, you play off each other. Very few decisions were made without really working that way. Even tiny little decisions,” explains Hariri, who doesn’t believe in the idea of the master architect: “It just doesn’t work like that.”

At the end of the day, the project took 14 years; almost 9 were spent searching for the site. But, as Hariri assures, “if you boil it all down, that time really helped us.” According to the architect, having that time is what, in a way, “made the building possible”: it gave them time to research, to test, to innovate and to connect with the right people. In this case, having time was essential to meet the high standards the project required: a mother temple is supposed to endure at least 400 years. Hariri is optimistic: “if it’s true to form, then it will last.” 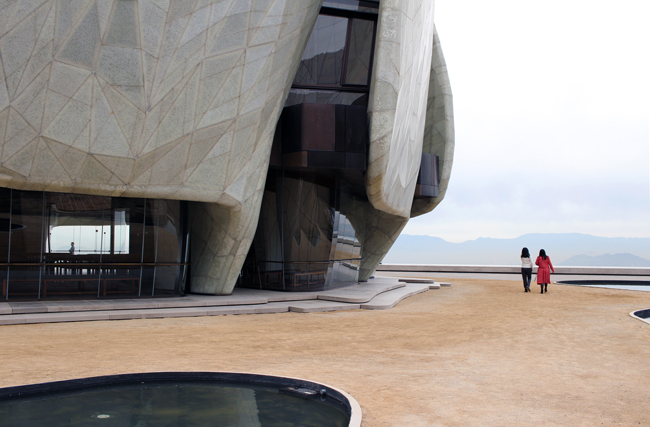 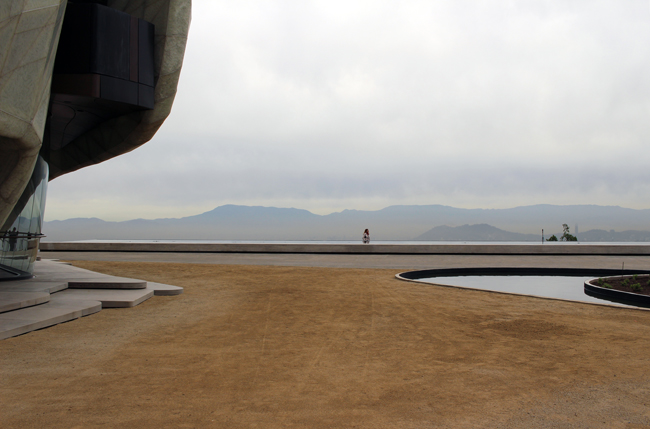 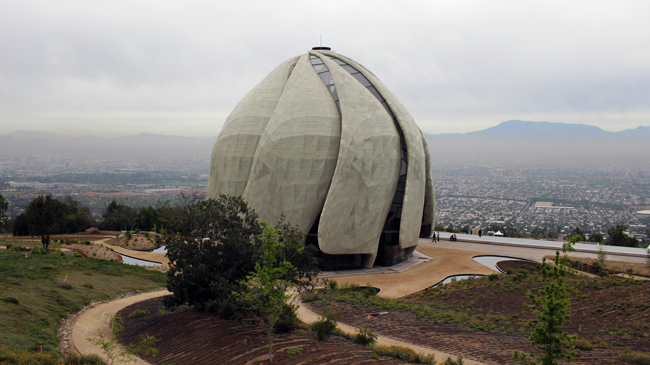 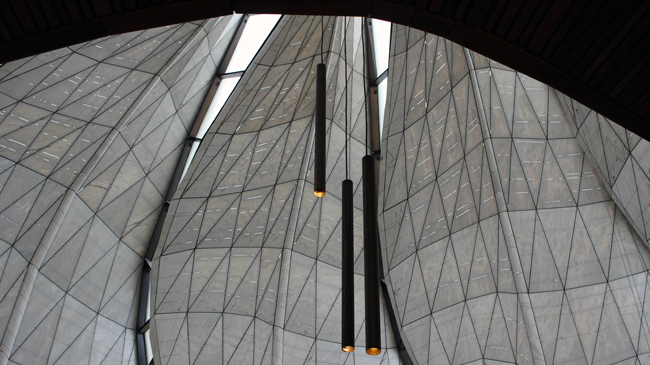 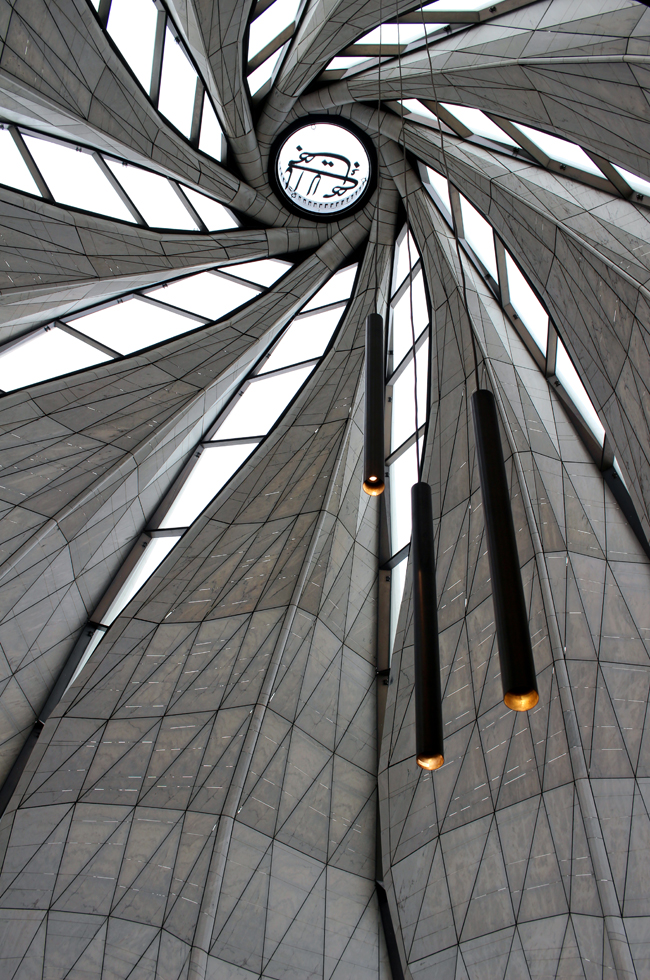 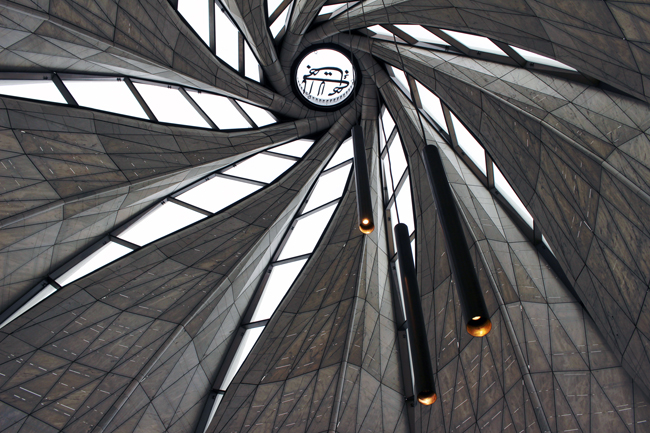 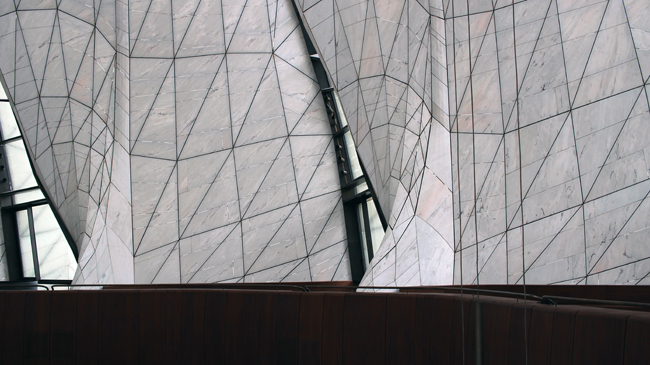 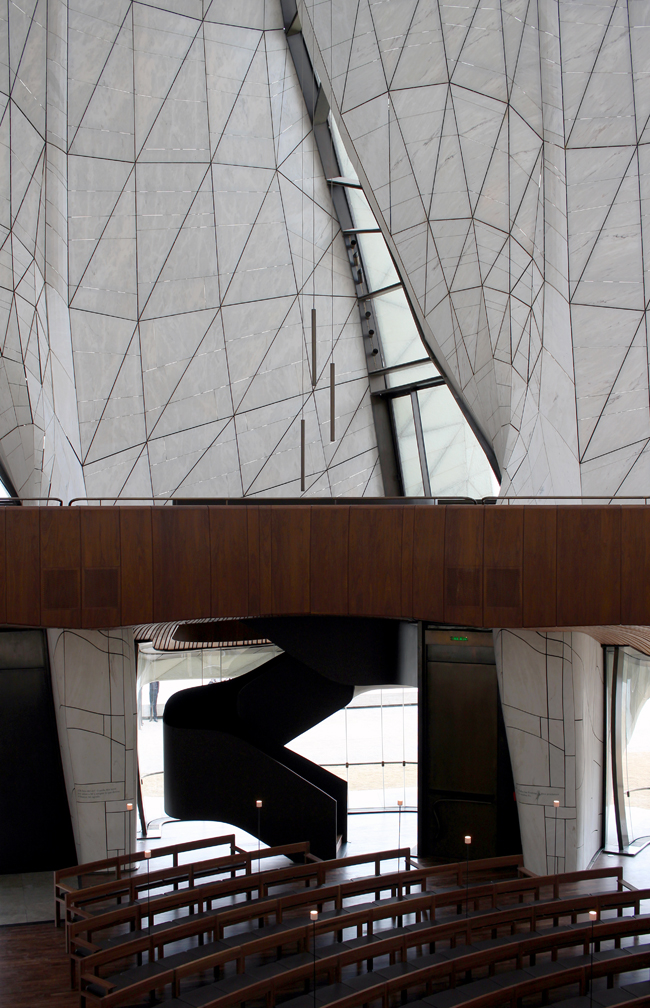 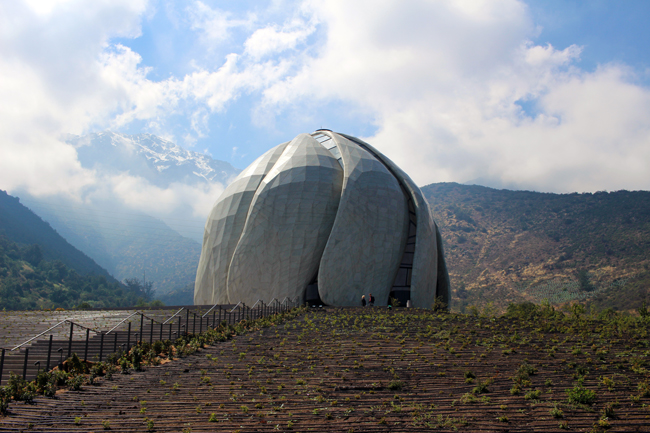 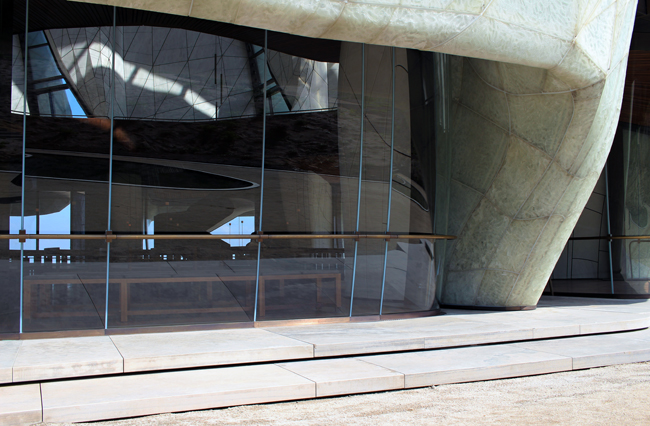 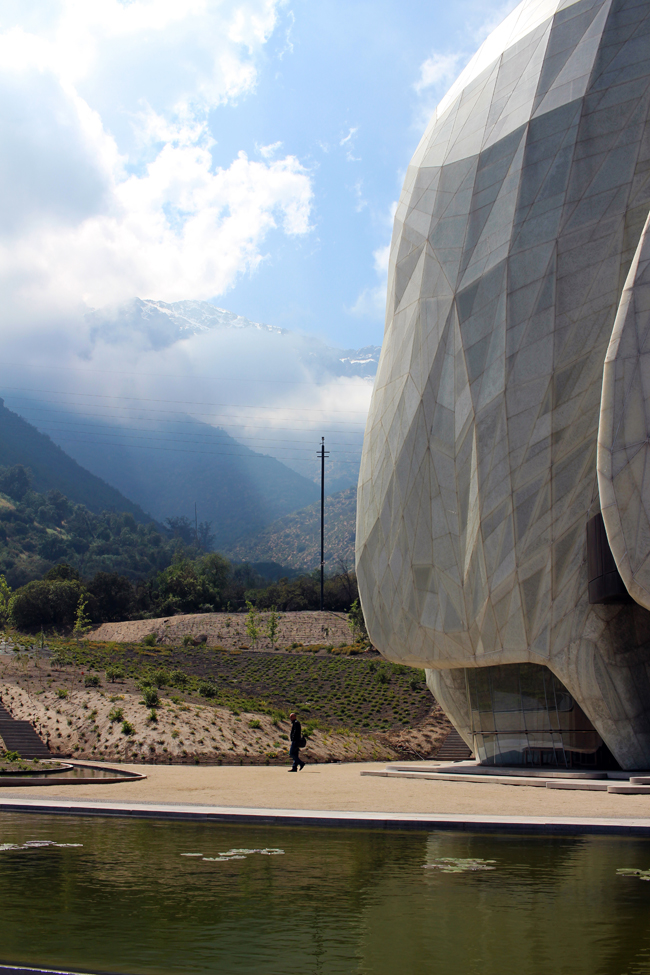 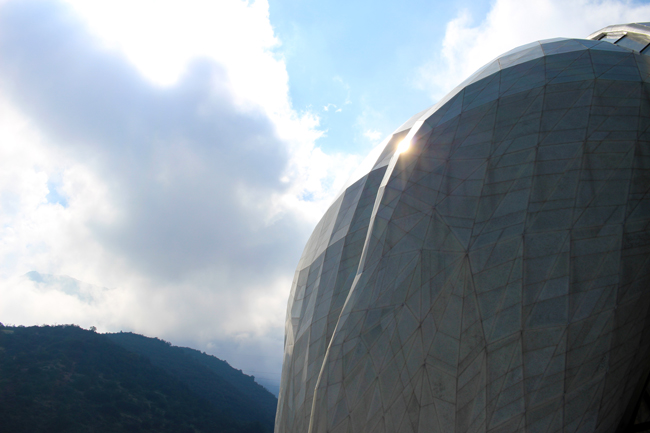