On the night of its rechristening, the old Santa Fe Savings & Loan building seemed to hover above Palm Canyon Drive. Cleansed of desert grime and lit skillfully with invisible LEDs, the long-shuttered bank has been reborn as the Palm Springs Art Museum’s Architecture and Design Center.

Widely recognized as a classic of Desert Modernism, E. Stewart Williams’s 1961 bank closed in the wake of the savings and loan crisis in the late 1980s. As recently as 2009, there were plans to construct a four-story condo smack up against two sides of Williams’s building, stifling both its access to light and its supremely elegant proportions. Fortunately, a group of concerned citizens—led by Sidney Williams, a curator at the Palm Springs Art Museum and the architect’s daughter-in-law—stopped the project. They raised the $3 million that enabled the museum to purchase the building and grounds, which it did in 2011.

Now, just three years later, the former bank has been repurposed with both admirable speed and remarkable thrift. After spending an additional $3.5 million for the building’s restoration and reprogramming, Palm Springs has a new 13,000 square-foot cultural hub at the heart of a rapidly reviving downtown.

Of course, the single most important item in the center’s collection is the building, now called the Edwards Harris Pavilion. Like Mies’ Farnsworth House, William’s masterwork is essentially a glass box sandwiched between thin planes of concrete—the lower plane a kind of plinth made to float by invisible supports, the upper plane held aloft by impossibly narrow piers. Also like the Farnsworth, the shape and proportions of William’s pavilion recall the form of a Greek temple. 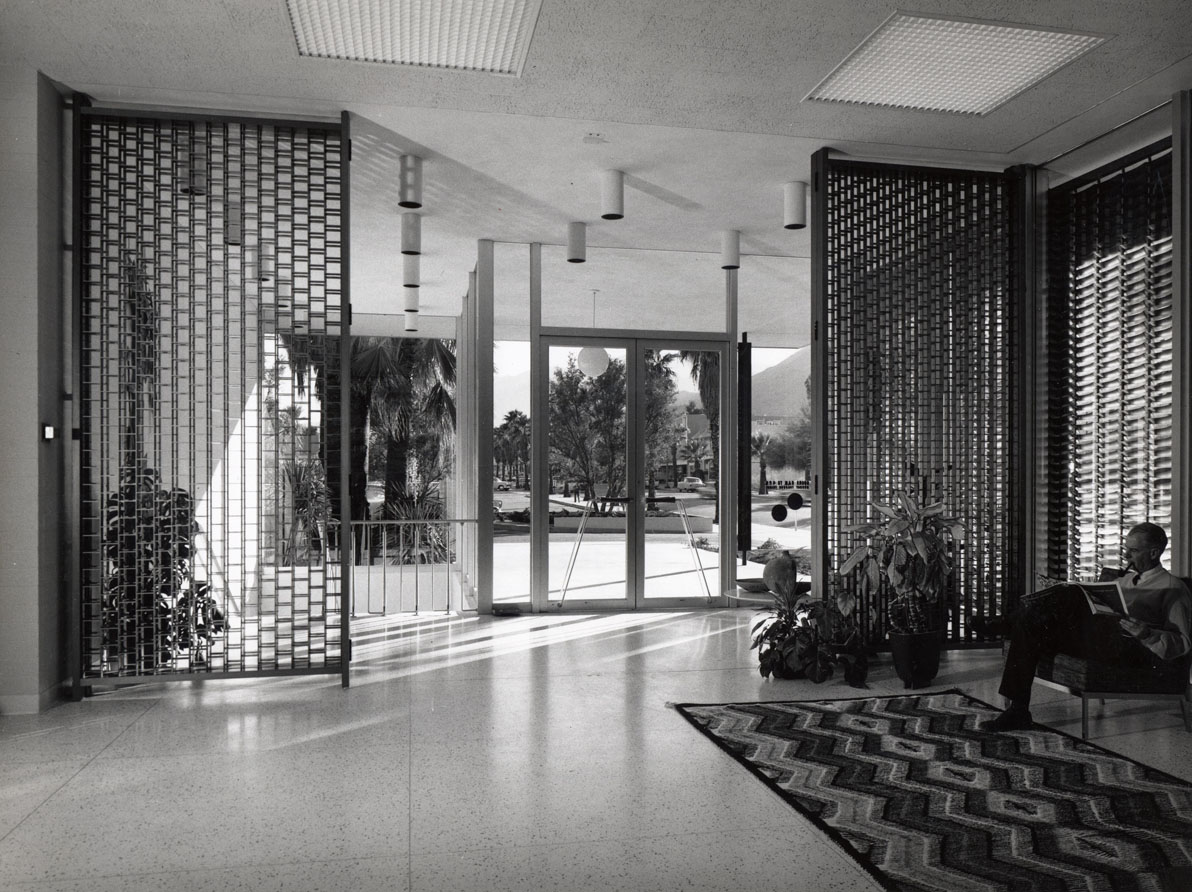 Banks have been traditionally adorned with Greco-Roman motifs to appear timeless, impenetrable. Yet Williams’s building is incredibly porous, with wide spans of transparent glass. Rather than a labyrinth of offices, the bank’s main floor is essentially one vast, transparent room. And in place of massive stone columns, Williams uses skinny steel poles, which become narrower at points where they meet floor and ceiling—as if threatening to disappear altogether.

Such transparency must have seemed strange and startling when the bank was first opened. New York City’s Manufacturer’s Trust Company Building, the first glass-curtained bank in the US, had been completed only a few years before in 1954. “Modernism does make you more vulnerable, but it also makes you more open and accessible,” says Leo Marmol, who along with partner Ron Radziner took charge of the bank’s restoration. For Marmol, this accessibility helped make the transition from bank to museum remarkably painless. “There were interesting synergies between the two uses, since we were working with what was basically one big, luminous space,” he tells me at the museum’s unveiling. 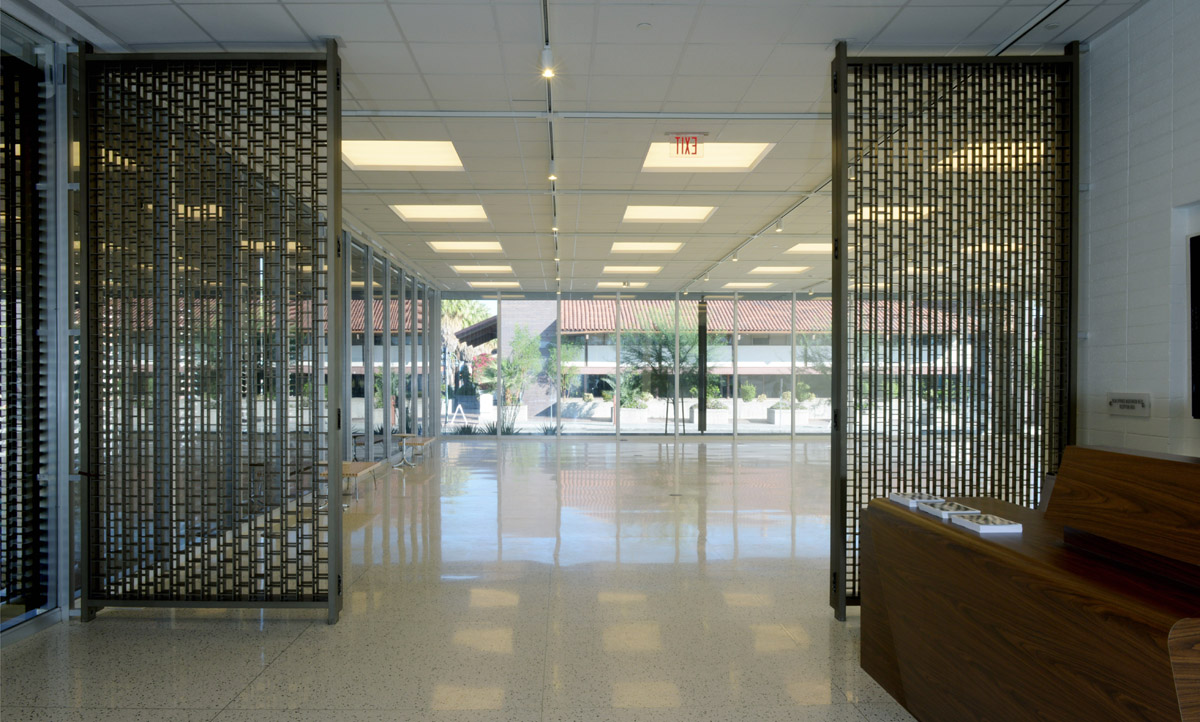 The bank’s original metal gates were restored during the building’s conversion.

Inside, contemporary interventions are more obvious, but still modest. The tellers’ windows are gone. The bank’s massive safe has been taken over by the new museum shop. Windows have a reflective film that makes them more shatterproof for insurance purposes, while also protecting artworks from the fierce desert sunshine. An elevator, discretely tucked between the shop and main gallery, provides access to the pavilion’s basement. This lower level will be used to house a room for events as well as to study the the museum’s design and photography archives, which includes the archives of Williams and architect Albert Frey, 1953 presentation drawings by Richard Neutra, and a rendering of the proposed World Trade Center plan by Daniel Libeskind.

Appropriately enough, the museum’s inaugural exhibition is devoted to E. Stewart Williams. Trained in the Beaux Arts style at Cornell in early 1930s, Williams was essentially an autodidact Modernist, which he discovered during an extended stay in Europe in 1938. He exhaustively observed the new approach, and then found fertile ground in Palm Springs, which also attracted Neutra, Frey, Donald Wexler, and other leading Desert Modernists. 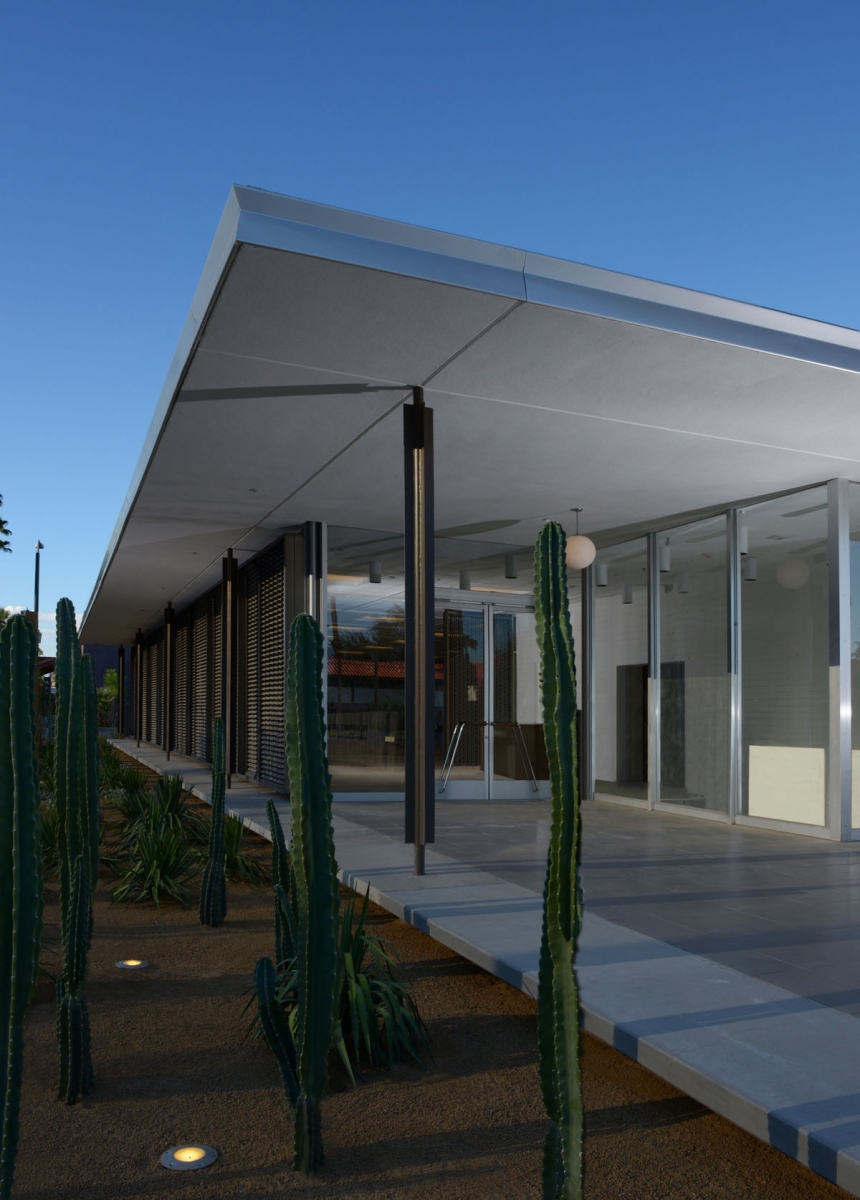 The building appears to be floating above the cactus landscaping.

Palm Springs possesses one of the densest concentrations of midcentury modern architecture in the country. However many works are under threat, especially since the resort city is experiencing a construction boom as a new generation rediscovers its sun-bleached charms.

On the center’s opening night, I took a break from the festivities and walked out to Palm Canyon Drive. From here I watched Palm Springs society stream through the glass-sheathed pavilion, and I am quite sure Williams is right. Desert Modernism has just gotten a powerful new platform for both its preservation and dissemination.